come to MIT, get to forge metal with your bare hands!! (and a hammer)

At MIT, every student has an advisor — in fact, throughout their time here, every student will have multiple advisors! It starts in freshman year with our first-year advisors; once you declare your major, you get a major-specific advisor (or two if you double major :0). I like that at MIT, unlike some other schools, you’re required to meet with your advisor at the beginning of the semester and have them approve your course selections, so that you can introduce yourself, get acquainted, and check in. In freshman year, you can choose between either “traditional” advising (where you and your advisor meet one-on-one occasionally to chat) or an “advising seminar.” (There also used to be RBA/residence-based advising, where a group of people living in the same place would all have the same advisor, but this doesn’t exist anymore.)

This post will mostly be about advising seminars, because I am in one and I like it a lot! The idea is that before the school year starts, they publish a whole long list of advising seminars you can sign up for. The seminars last one semester, like a class,⁠01 Technically, they're 6 credits, or half a class, but I would not say they're really 6 credits of work. and have titles like “Designing Consumer Electronics” or “Geek Book Club” or “Prosody: The Music of Language” — there are so many that it takes two webpages to list them all. You rank a shortlist and right before school starts, everyone who opted in is assigned to a seminar and an advisor!

Each seminar counts for 6 units, so approximately one half of a typical class (theoretically 6 hours a week). Some people stick with traditional advising because don’t want to take an extra class, or they’re already at the freshman credit limit, or probably tons of other reasons I don’t know about, and that’s chill. I opted for an advising seminar because I like learning cool stuff — but also because I thought it wouldn’t be a bad idea to have an adult checking in with me every week, and to know I had someone to talk to if something went wrong.

So far, I am LOVING it. You guys… every week, we go down to the forge,⁠02 Can you believe MIT has a forge?!? we take metal… we hit it really hard… we make it pretty… it’s so so cool. Our first project was making a chain link. I turned this: 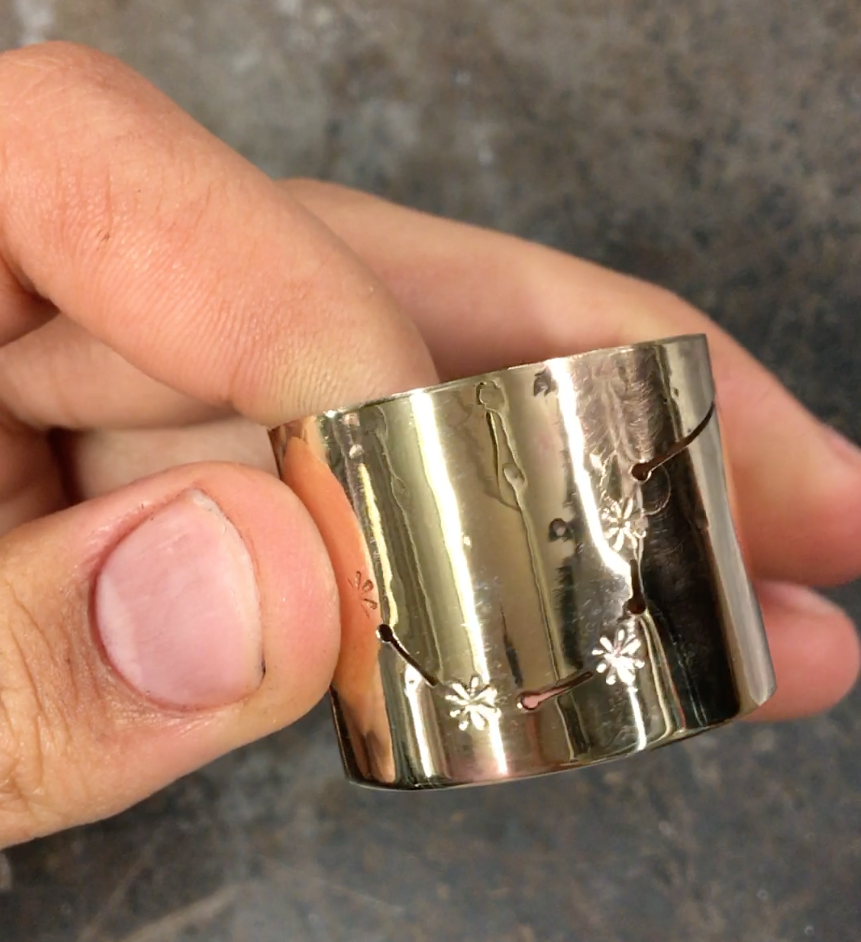 We could pretty much do whatever we wanted to the metal; the only requirements were, essentially, that we use our creativity. I thought it would be cool to have a sky-type thing, with some darkening or pattern at the top, and then constellations with light shining through them.

I stamped stars in the metal using a metal stamp⁠03 Weird how the name isn't related at all to the action, I know :P and a hammer, and used a drill press (for the first time!!) to make starter holes for the constellation lines. That brought me to this: 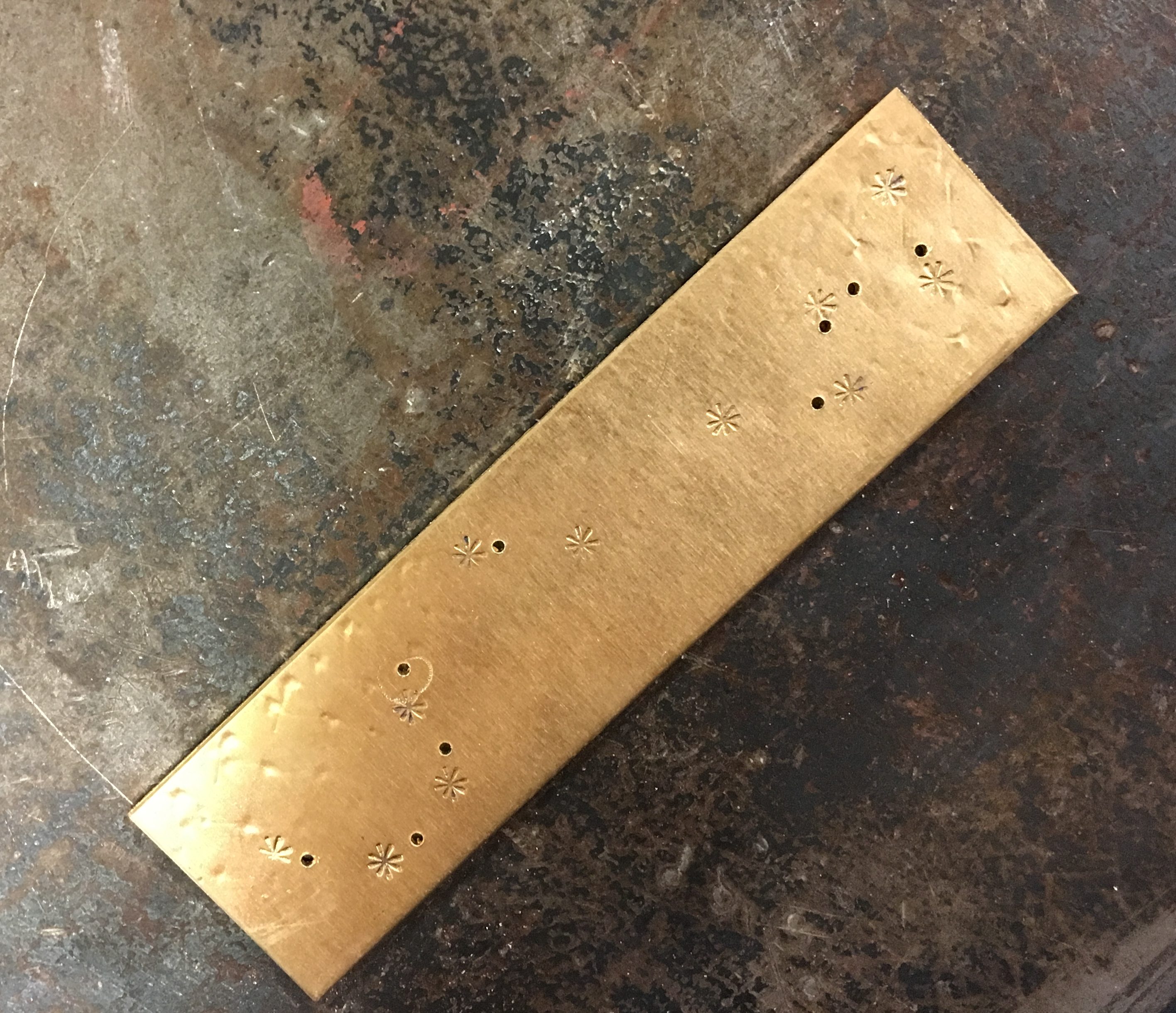 I extended each hole into a line using a jeweller’s saw… and then much, much, much hammering occurred. In order to facilitate roundedness, I got the curvature started on a bag of sand, then used a “ring mandrill” with a long cylindrical prong to get a perfect circle. Once that was finished, I soldered the ring together using an acetylene torch!! It was very different, and a lot more difficult, than the circuits I soldered with my dad as a kid (the solder was much more temperamental). Lastly, because heating up metal makes it look wayyyy weirder than you would expect (see later photos), it was time for polishing.

And the final product was shiny as heck!!

I really like the feeling of accomplishment that comes when you create something with your hands. This is my baby! I brought it into the world! Look how beautiful it is! Plus, I know how much I learned along the way, and it’s exciting to think of all the future projects I could use that knowledge for.

In terms of advising, I think I was right when I made my choice: it is nice to have someone checking in with me each week. I know people who claim that faculty advisors are useless, because upperclassmen are the ones who know what’s really going on on campus; to me, it seems like they serve very different purposes. When I want to know if a class is well-taught, or what its 3-hour “lab section” is like in person, or just how much “mathematical maturity” I need to take it — yes, I would ask an upperclassman (and I love that MIT’s mixed-year housing makes this so easy). But my advisor is the one who can tell me, “I’ve seen years of students make that choice and none of them regretted it”, or “the department actually doesn’t want to freshmen to do that and here’s why”, and who can give me the perspective of life after college. I think that’s really valuable, and I’m glad that MIT makes it so easy for us to have access to mentoring in this way.

Please regard these lovely pictures of my cup (well… I wouldn’t be too offended if someone called it a “small bowl”) coming into existence:

The main trick to forming the shape: hit it with a cross peen hammer rather than the ball peen I mistakenly started with. The ball peen distributes force evenly, whereas the cross peen only sends force along its edges, lengthening the metal more in that direction. It’s amazing to see the metal move, especially right after it’s been heated up to ductility, when you hit it with even a small cross peen.

The added pattern is done with a small hammer and called “chase and repoussé”; the added colours are glass enameling, which you spread on in a powder and then heat to melt into glass. It’s aesthetic, but also makes my cup/bowl-thing food safe! I plan to fill it with much almond milk ^-^

Next up: a steel trivet for my cup! We’ve only worked with copper so far, so I’m excited to learn how to work this much harder metal.