A bear encounter and a wild cow-milking contest by Anna H. '14

When I arrived, he suggested that I borrow his sister’s mountain bike for the summer. I hopped on the bike with the following points in mind:

With a lot of coaxing, I managed to wobble (screeching) down the sidewalk to a gyro cafe and back. Two days later, I managed to transport myself down a riverside bike path.  Apparently my performance was worthy of leveling up, because a few days later I found myself in the passenger seat of Raphael’s ’88 Mercedes, two mountain bikes mounted on the back. The trail went eight miles up to Franklin Bridge, and the plan was to camp overnight before riding the eight miles back down the next morning.

We reached the trail head a little after noon. I swung on my backpack (which had, among other things, our camping stove, fuel, and my sleeping bag) took a moment to think “wow, this is actually a little heavy,” got on the bike, and roamed around the parking lot for a while. I felt okay, so off we went!

The first half hour or so was tough. I kept panicking and stopping, trying to fiddle with changing the gear on the bike. Eventually I had such bad nausea that I had to get off the bike and sit on the ground. My legs hurt, my stomach hurt, I was out of breath, and my butt was NOT happy at bumping over all those rocks. Raphael was very patient, though, and eventually my bad mood passed and my bike balance improved. Not to mention that the scenery was beautiful: 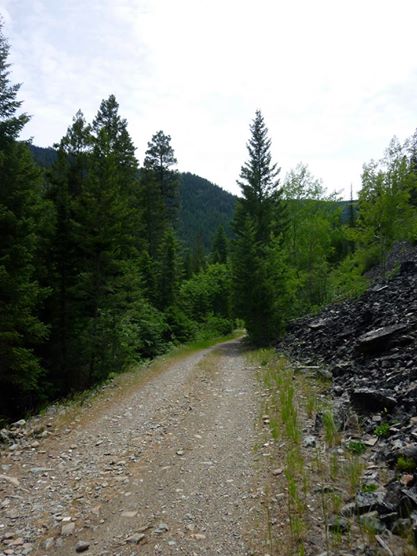 At some point, I literally could not continue (my legs were operating so slowly that the bike would just stop and tip over) so we took a break. We sat on the side of the road, and I scanned the meadow across the stream. A large brown mass moved. Hey, it was fuzzy! Kind of like a teddy-

OH GOODNESS. “Raphael, what is that?” Raphael looked, then said “let’s get back on the bikes.” So, we got back on the bikes, and suddenly (like magic!) I had enough energy to keep going for a while. It’s amazing what your body is capable of when that flee-from-bear response kicks in.

A few minutes later, I was definitively out of steam, so we stopped for a proper break. I had to do that a couple more times before we reached Franklin Bridge, and in the last few minutes I was walking and pulling my bike along, but we made it! 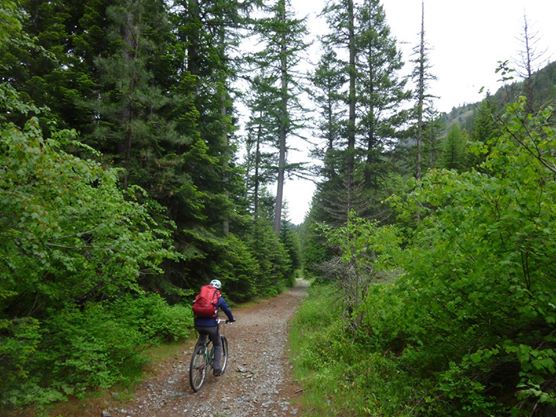 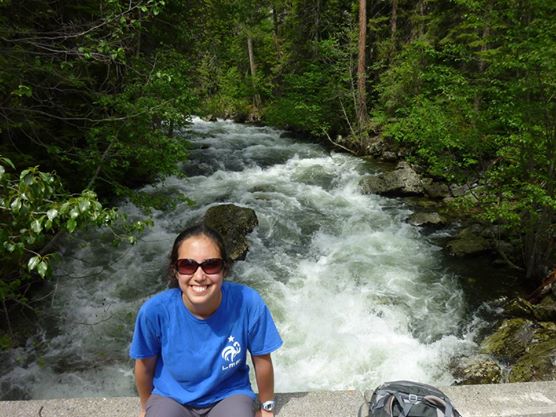 In other news, we went to a rodeo in a little town called Hot Springs (population: roughly that of a large MIT dormitory). The event attracted a huge audience, and we had trouble finding seats. When we did, I felt out of place for not wearing a cowboy hat. Events included: bronco-riding, steer-roping, barrel-racing, and — ~drumroll~ — WILD COW-MILKING. More on that in a moment. First some pictures of the first few events: 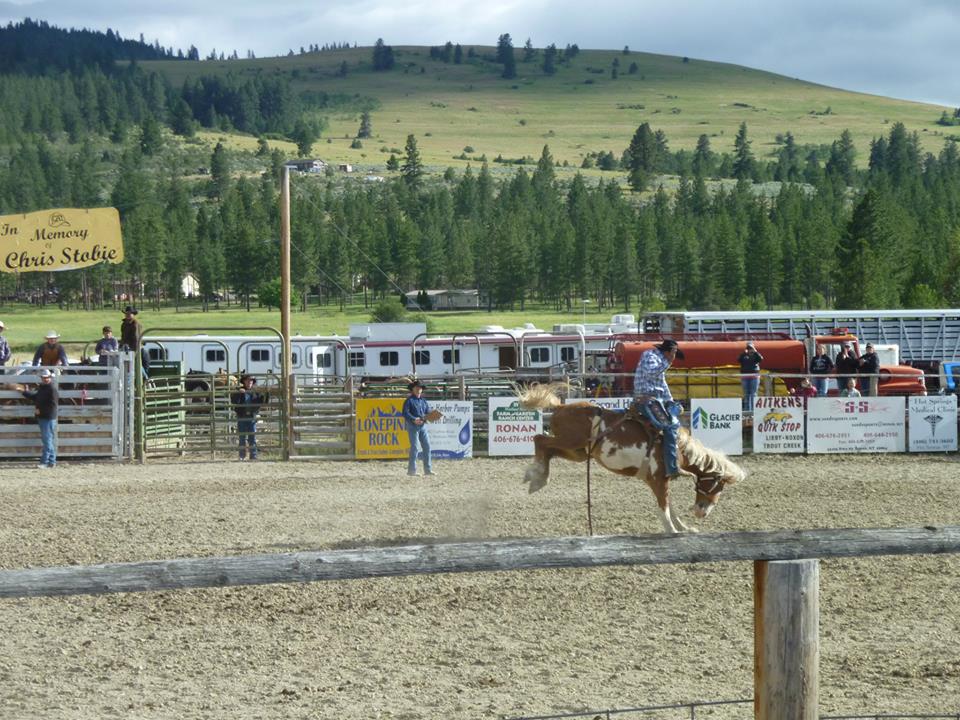 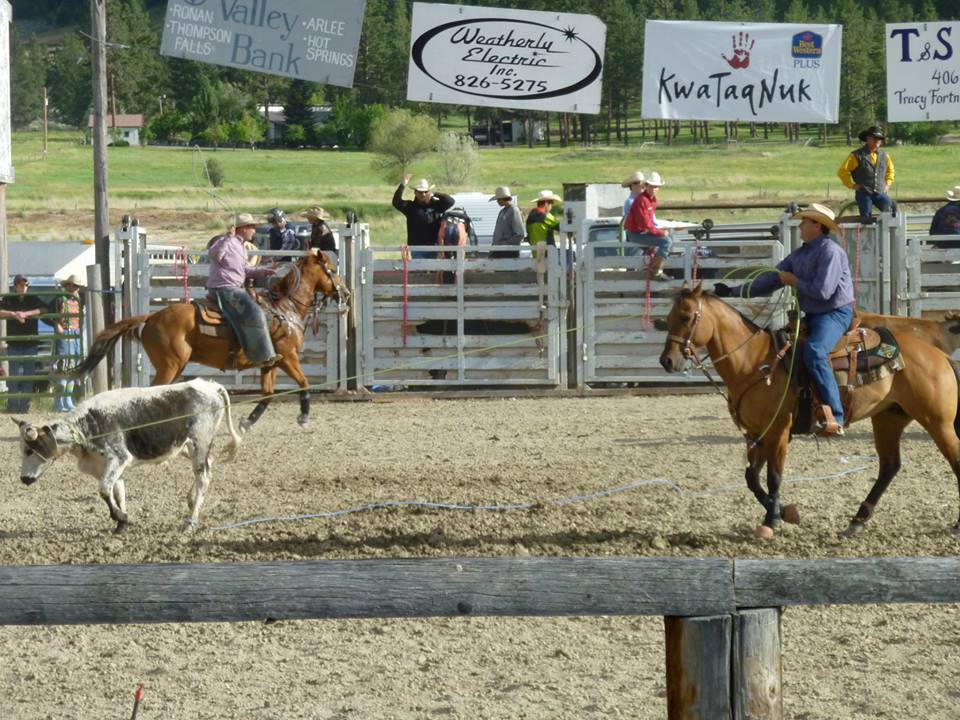 And here’s a tiny little girl participating in the barrel-racing competition (with Grandma helping her out): 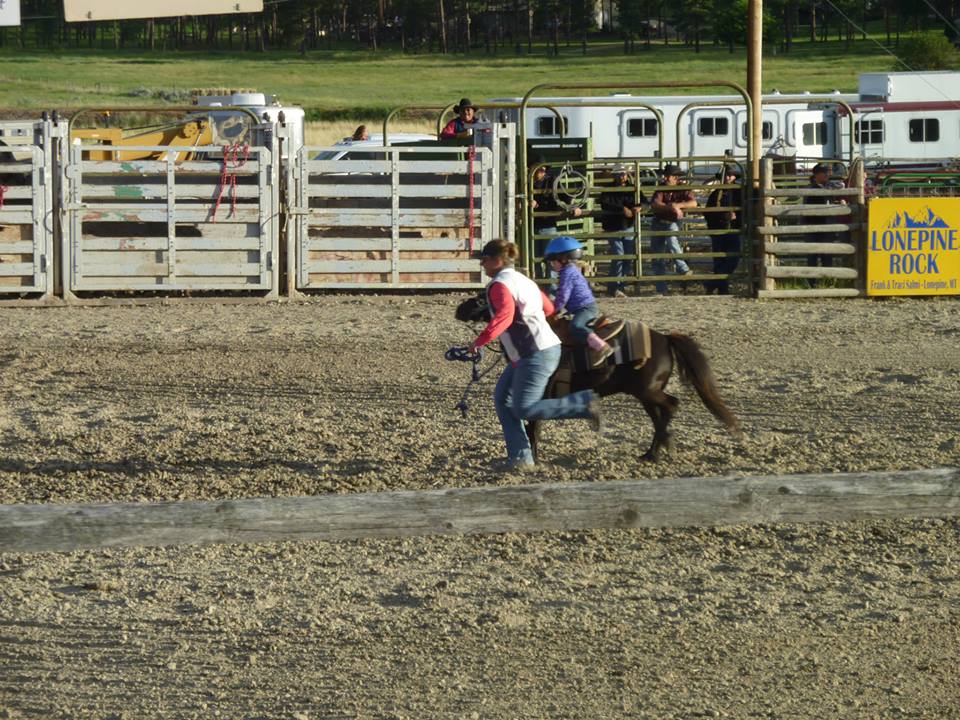 I’m not sure I had ever seen a horse when I was that age.

The final event was wild cow-milking. Four teams of volunteers entered the arena. 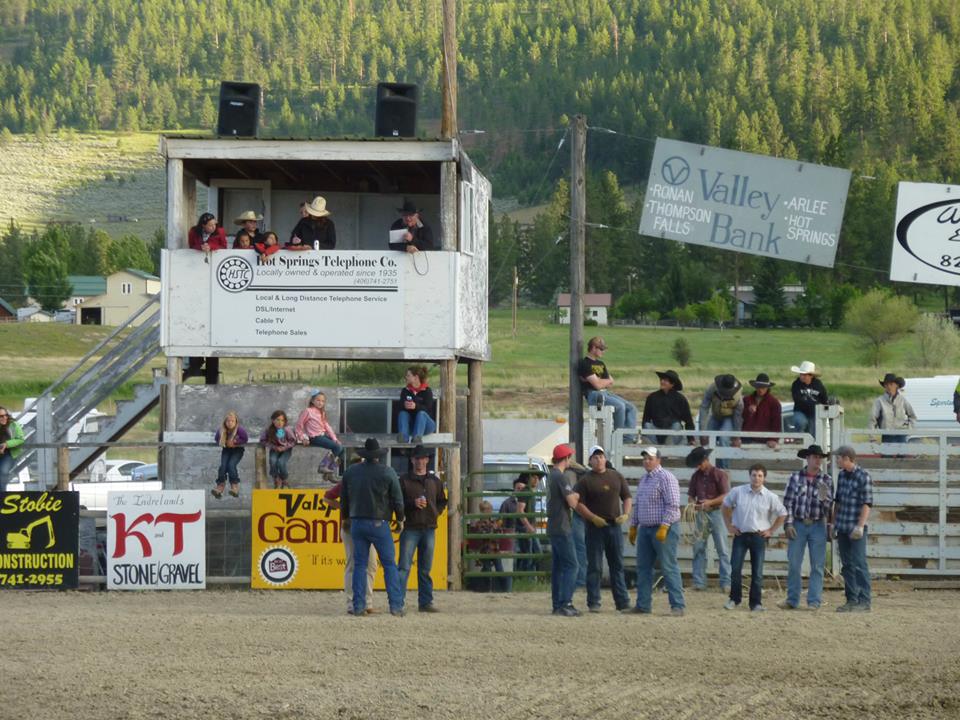 The event was exactly what you are imagining. A wild cow (one per team) was released from a pen, and the teams raced to catch the cow, tackle it to the ground, and milk it. First team to bring a cup of milk to the judge, won. It was terrifying to watch (I kept thinking that someone’s skull was going to get smashed in by a cow hoof) but two of the teams were successful and nobody (to my total astonishment) was injured. So, that was my first proper rodeo experience.

I’ve also been able to do some good old-fashioned astronomy! Blue Mountain Observatory is about an hour’s drive (mostly uphill) from Missoula. When we arrived, there was a beautiful sunset and a gorgeous view of Lolo Peak (> 9000 ft): 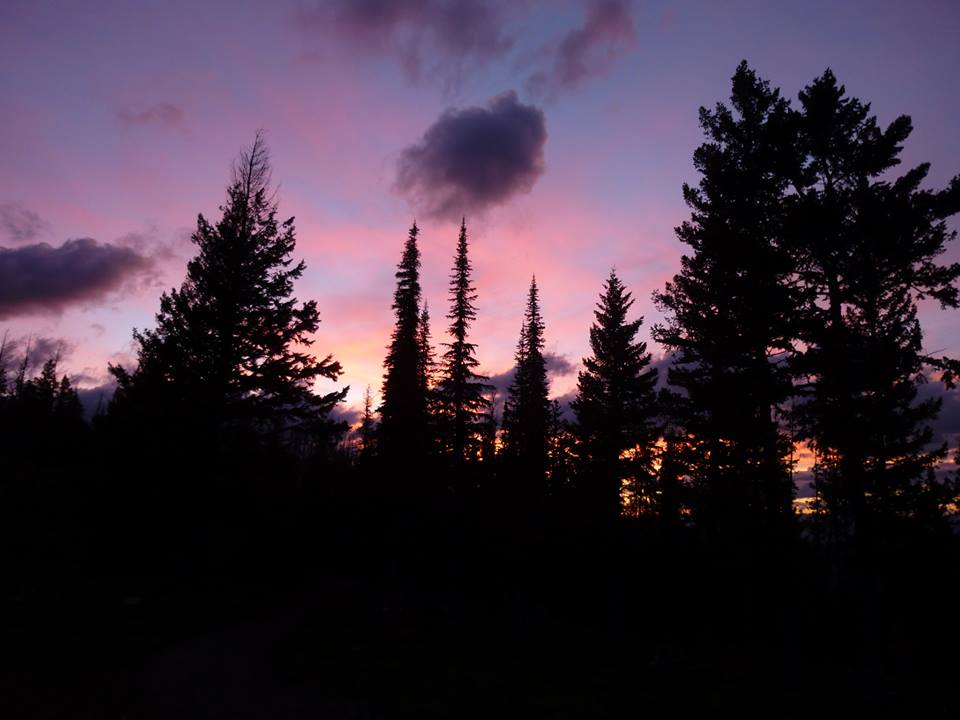 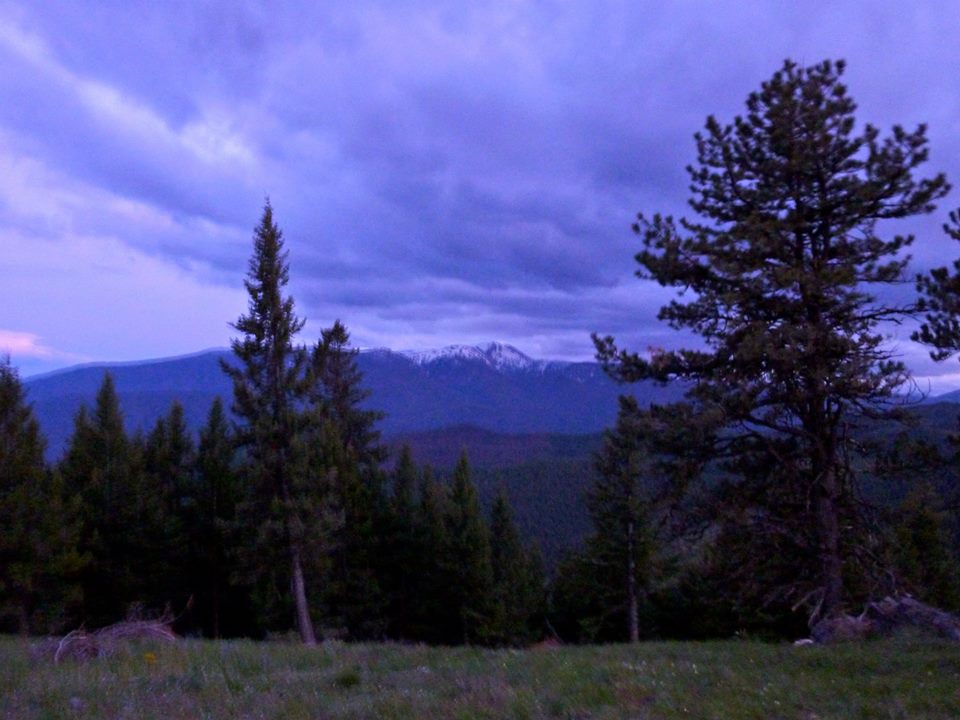 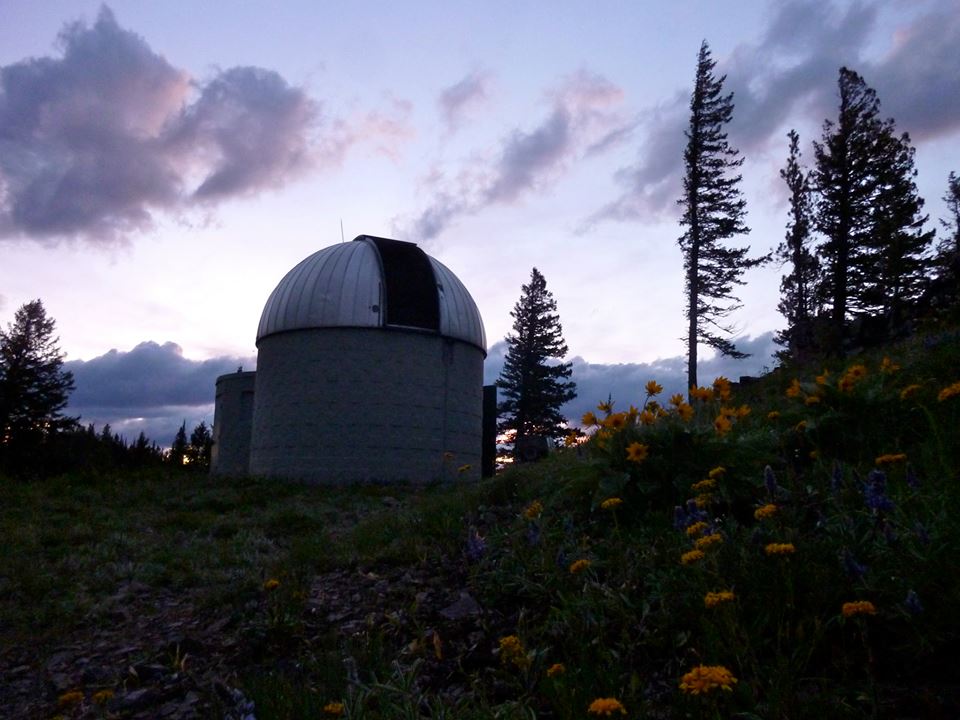 We had a barbecue and chatted while the sun finished setting. When it was dark, we slewed the telescope with a very old-fashioned remote control (it was SO cool) with glowing red dials. We looked at M3 (a globular cluster), Saturn (we could see its largest moon, Titan!), and the Ring Nebula. Saturn is one of my favorite objects to look at through a telescope: it looks just like a picture. It doesn’t look real. When Galileo first saw Saturn, he couldn’t get enough resolution to see its rings: it looked like Saturn had two little blobs on either side of its body. So he drew the rings on like ears.

I’m currently working on collecting summer summaries from a bunch of French House residents, so stay tuned for that.