a compilation of creative projects by Alan Z. '23

creativity? at MY institute?

Among the many classes I took this semester, I ended up taking two and a half classes that fell under MIT’s broad category of HASS-A, or arts classes.⁠01 MIT students are required to take a variety of Humanities, Arts, and Social Sciences classes, including one from each of those categories; thus, HASS-H, HASS-A, and HASS-S In the process, I ended up doing a variety of creative projects—here are a few of them, organized by class:

At the beginning of the semester, our director asked us what kind of music we wanted to sing, and, accordingly, put people into various duos and trios that we learned, practiced, and got feedback on throughout the semester. At the end of the semester, we were asked to record those pieces and edit them together. I told the director I was willing to sing basically anything, and I ended up being assigned to two duos—“Maria, mater gratiæ” by Fauré and “It Takes Two” by Sondheim.

“Maria, mater gratiæ” is a setting of a portion of the hymn “Memento rerum Conditor” for Soprano/Alto or Tenor/Bass, by Fauré, a famous French composer with whom I was unfamiliar⁠02 because I am uncultured before learning this song. I performed this with Sai T., who is a grad student, and despite the TB scoring and us both being tenors, it ended up being a really pretty piece to sing.

“It Takes Two” is a song from the musical Into the Woods by Sondheim, which mixes a bunch of fairy tales together. I performed this with Eva D. ’22, who is also in my acapella group. In this song, the Baker (me!) and the Baker’s Wife (Eva) are just realizing that they need to work together in order to accomplish their goals in the woods. Somewhat surprisingly,⁠03 given my noted penchant for bursting out into song at anything that even barely sounds like a line from a musical I wasn’t too familiar with Into the Woods before this semester, but singing this song was still quite fun!

There were four creative projects in this class, each of which had its own unique restrictions. The first project involved working with a system called Curveship.js, which allows you to view a story in a bunch of different ways,⁠04 this comes from a field called narratology, which i am very much glossing over right now such as in a different order or with a different narrator (broadly speaking, the “I” of the story) or narratee (broadly speaking, the “you” of the story). We were asked to either write a story that would be particularly compelling to view through different lenses, or to implement a new feature in Curveship. I chose the latter, creating the “focalizer” feature, which only describes events which occur at a certain location or which are only visible to certain characters.

The second project involved writing a slightly larger piece of digital interactive fiction. I ended up choosing to write this in a system called Inform 7, a decision that later turned out to be a mistake. This ended up taking a lot more time than it probably should have, and ended up not being a great user experience due to low discoverability (including a variety of easter eggs), but the end result does have some amusing properties. (And if you’re struggling with figuring out how to continue and want a hint, read this annotation.)⁠05 try dying

The third project involved putting together a multisquential story on a single sheet of paper, a rule I quickly exploited by printing double-sided and upside-down in places and asking the reader to fold things. We also weren’t allowed to change what happened in the story based on what the reader did, so I actually ended up drawing a directed acyclic graph about the order in which information could be presented: 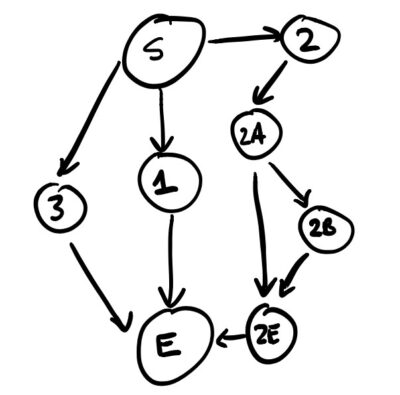 this is not the original but close enough

The final project was also a paper project, but without any of the requirements from project three. It was also probably my favorite, since, having just spent over ten hours on the MBTA and multiple hours on top of that researching its history, I decided to write this one based on the song “MTA”, where a man named Charlie gets stuck on the MTA (now MBTA) because he can’t afford to pay the exit fare. I also wanted to experiment with the epistolary form,⁠06 writing through a series of documents, usually letters which is why it ended up looking like this! 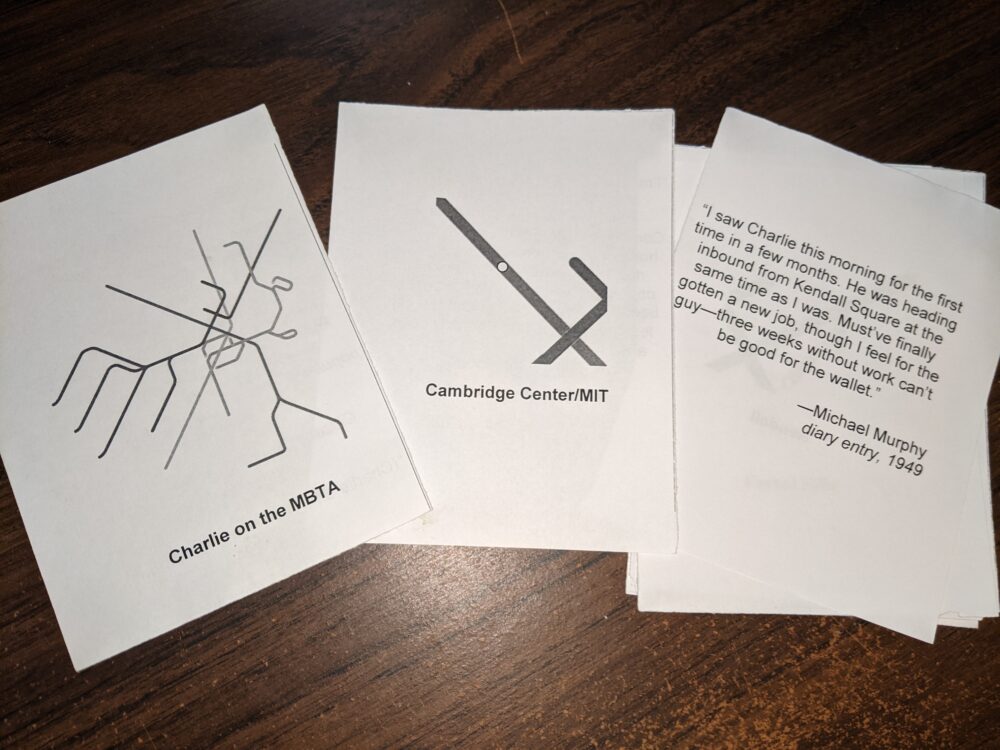 wish I had a color printer

Each student in this class wrote two short stories that we workshopped in class. These are considerably longer (at least ten pages each), so although I’ve linked one of them here for completeness, it will probably take a significant amount of time to consume in comparison to the rest of the content here.

I ended up running out of steam while writing the first story for the class—I wanted to explore the feeling of isolation and disappointment that comes from having something cancelled on you,⁠07 this is definitely not inspired by the ongoing pandemic s but I ended up not really having any significant conflict, and the more I wrote the more I felt like I was digging myself into a hole. My classmates very helpfully provided me with a lot of different routes I could’ve chosen to write, but none of them really appealed to me, so I left the story in its state after the one required revision.

On the other hand, I had been working on the second story for a while, having written an initial draft for 21W.755⁠08 reading and writing short stories last semester. I ended up scrapping that initial draft entirely and rewriting it for this class, culminating in a second draft that I’m not entirely ready to call “done.” As such, I haven’t included a link to it, but I can say a little bit about it: the story is about two Chinese-American kids who have to go to live with their extended family in China, and touches on a lot of themes I find personally interesting, like language and family itself. This is part of the reason it’s not quite done yet—I’m hoping to spend more time working on the story and clarifying those ideas before I’m ready to share it.

There are a lot of different forms creativity takes at MIT, and arts classes are just one of them!⁠09 one could argue that engineering itself requires a lot of creativity I really enjoyed making these projects though, and I’m looking forwards to taking more classes like this⁠10 next semester, I'll be taking poetry workshop and concert choir, so I'll have more to share :o in the future!