My roommate and I built a lofty heaven!

Even while I was excited by the thought of MIT, I spent many years being intimidated: as a child, hearing stories of what MIT undergrads got up to; as an applicant, seeing other applicants brag about their skills; and as a prefrosh, getting a glimpse of the amazing things my future classmates had learned and done. I’m still intimidated sometimes, now, but I’m also realizing something else — two something elses, which I think maybe are central to the way MIT works.

(This applies to many things, including cooking, but I’ll save that for another time.)

One of the reasons I was drawn to MIT was for its “buildy” culture (like the awesome, huge structures East Campus puts up in its courtyard every REX), but when I got here, all the upperclassmen had drills, and everyone I talked to had done tons of robotics, and it felt like my high school experiences were nothing in comparison.
Well, guess what? I built a loft from scratch!!! Been sleeping on it for two weeks and counting, and I’m not dead yet.
Here are the sweet deets:
The backstory is that in EC, the singles are big and the doubles are small. (I’ve walked into many an upperclassman single, looked around, and thought, is this really smaller than my double?) In order to have actual floor space, my roommate Anika ’22 and I decided we wanted to loft our beds, as we had seen so many other people do. I don’t know if this is common in other dorms, but I suspect it’s so popular in EC because of room size, the freedom we’re given to tinker/build/paint if we want to — and also the sheer quantity of wood we have available. If they help to deconstruct those aforementioned REX structures, freshmen (and anyone else who helps) are able to take some of the wood and reuse it for their own ends.
When Anika and I agreed that this is what we wanted to do, I don’t think either of us had any idea of how we would really accomplish it. We could imagine what a loft would look like, and we knew it would need some kind of support, some kind of platform… but what did that really entail? Mentally, I decided that I would just try to get through it one step at a time. The first step was obtaining the wood (tbh, big thanks to Anika there, because I was super busy during deconstruction and she did most of the work). Then we had to cut the wood, which meant we had to plan a design.
Here’s where point #1 comes in. All those upperclassmen with drills turned out to be supremely helpful: they showed us their lofts, talked over our design with us, and told us about their experiences in order to keep us from making a dangerous (or uncomfortable) mistake. We spent maybe an hour planning, and another two measuring & cutting & dragging all the wood up to our room (I am glad, daily, that we live on the second floor and not the fifth). In this case, I actually did know how to do something: use a chop saw! My experience volunteering with Habitat for Humanity in Toronto was really helpful and kept me from cutting any of my fingers off. 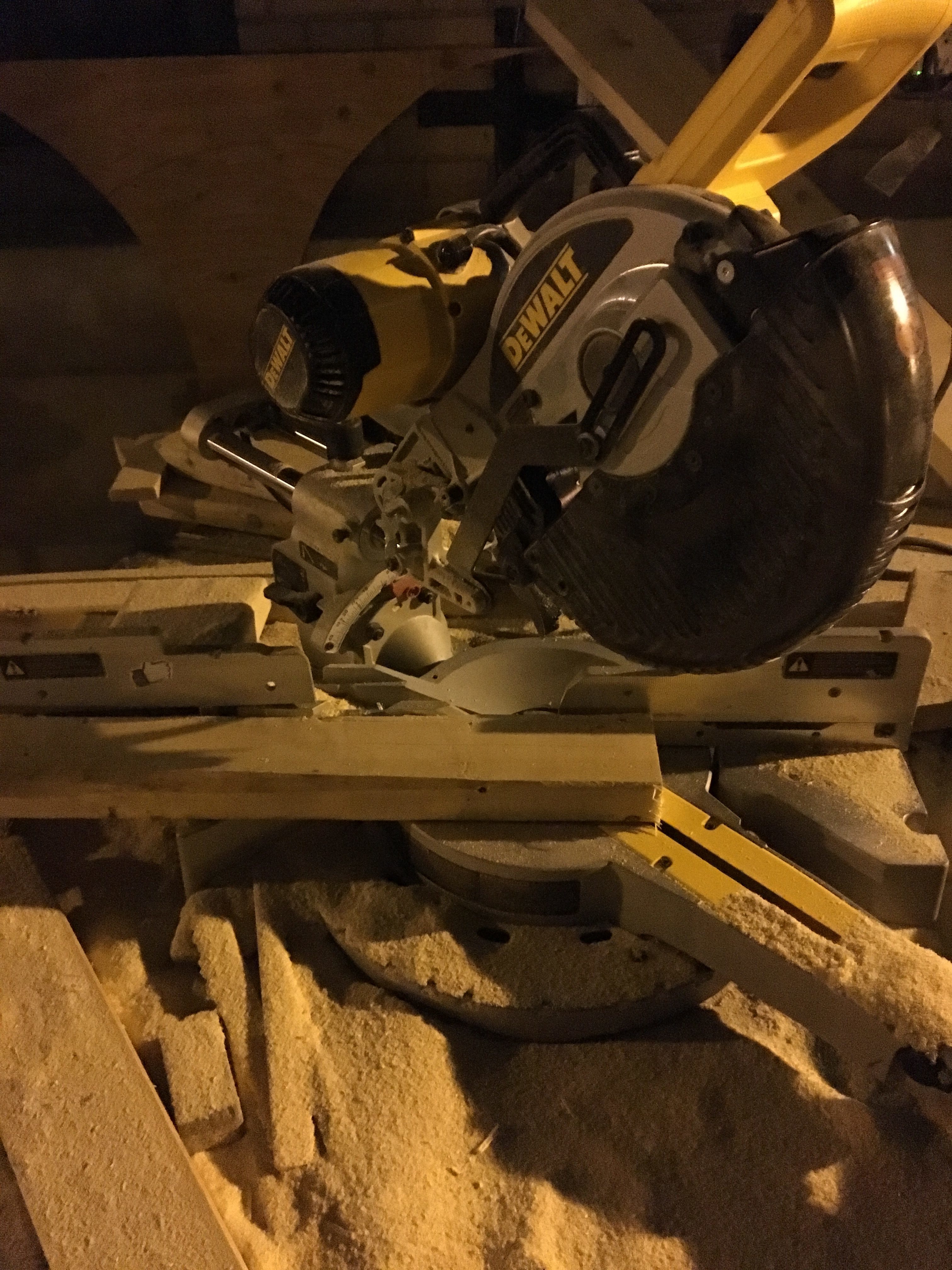 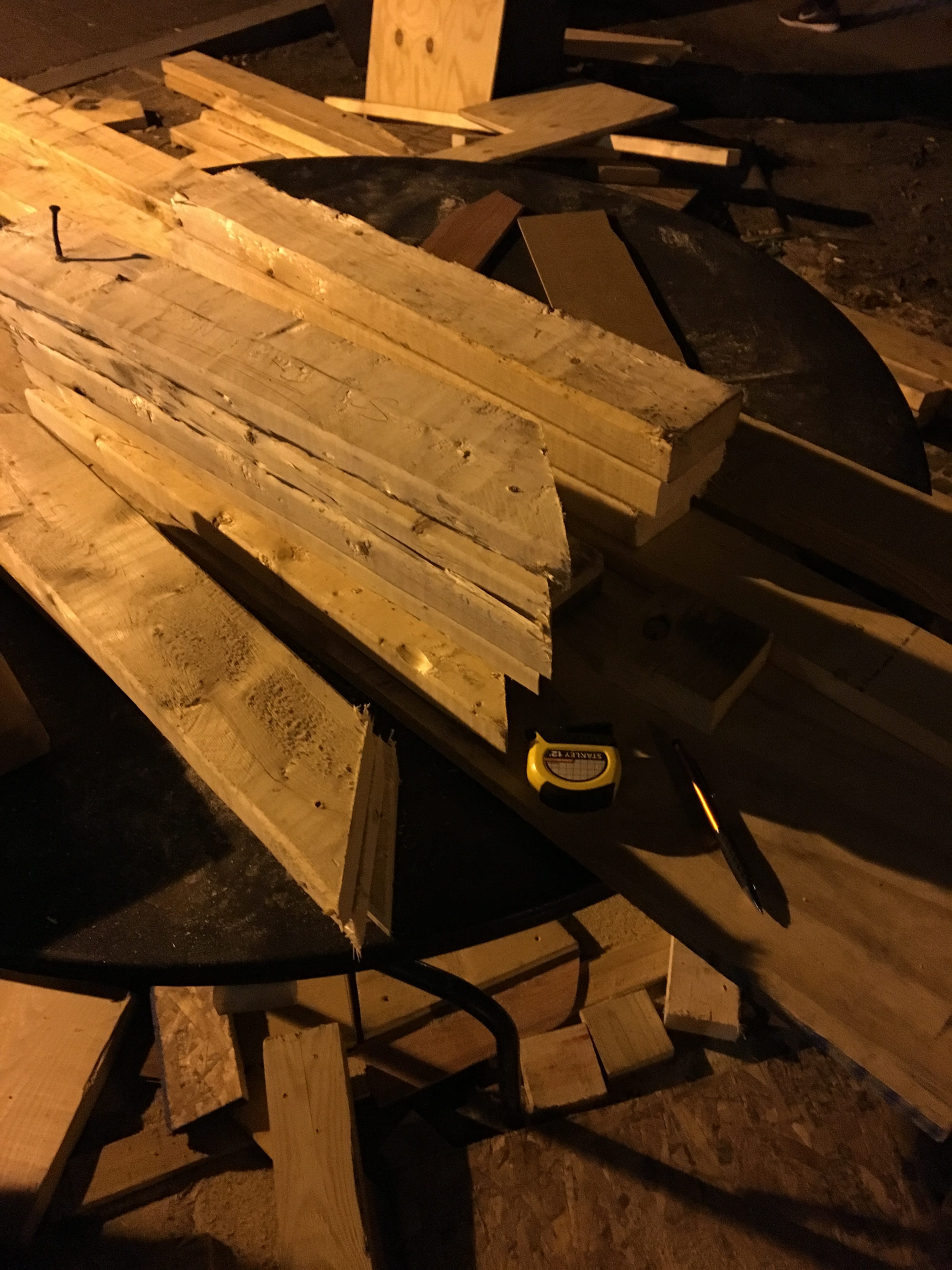 …and some chopped wood! This was taken at like 11 pm #eastcampuslife

We finished cutting all the wood on the day before classes started, and although we both really wanted to set right to building, we decided that that maaaaybe wasn’t the best idea. So the wood sat in our closet until the weekend, making everything smell nice.
Bright and early on Saturday morning (by which I mean about 11 am, of course), we got up and started to get ready. If you have never built a big project, you might be imagining that this took us fifteen minutes or so… No. Let’s say, fifteen minutes just to move all our furniture into the right spots (including dithering over which spots were the ‘right’ ones). Fifteen minutes to actually borrow a drill (which every upperclassman around was super happy to let us do), get the right drill bit, and get the right screws (we got too-short ones twice in a row). Ten minutes to figure out how we were gonna put the whole dang thing together, and get it all squared up. So now it’s noon and I’m kinda hungry and we’re… not even at this photo, which I probably took around 1 pm: 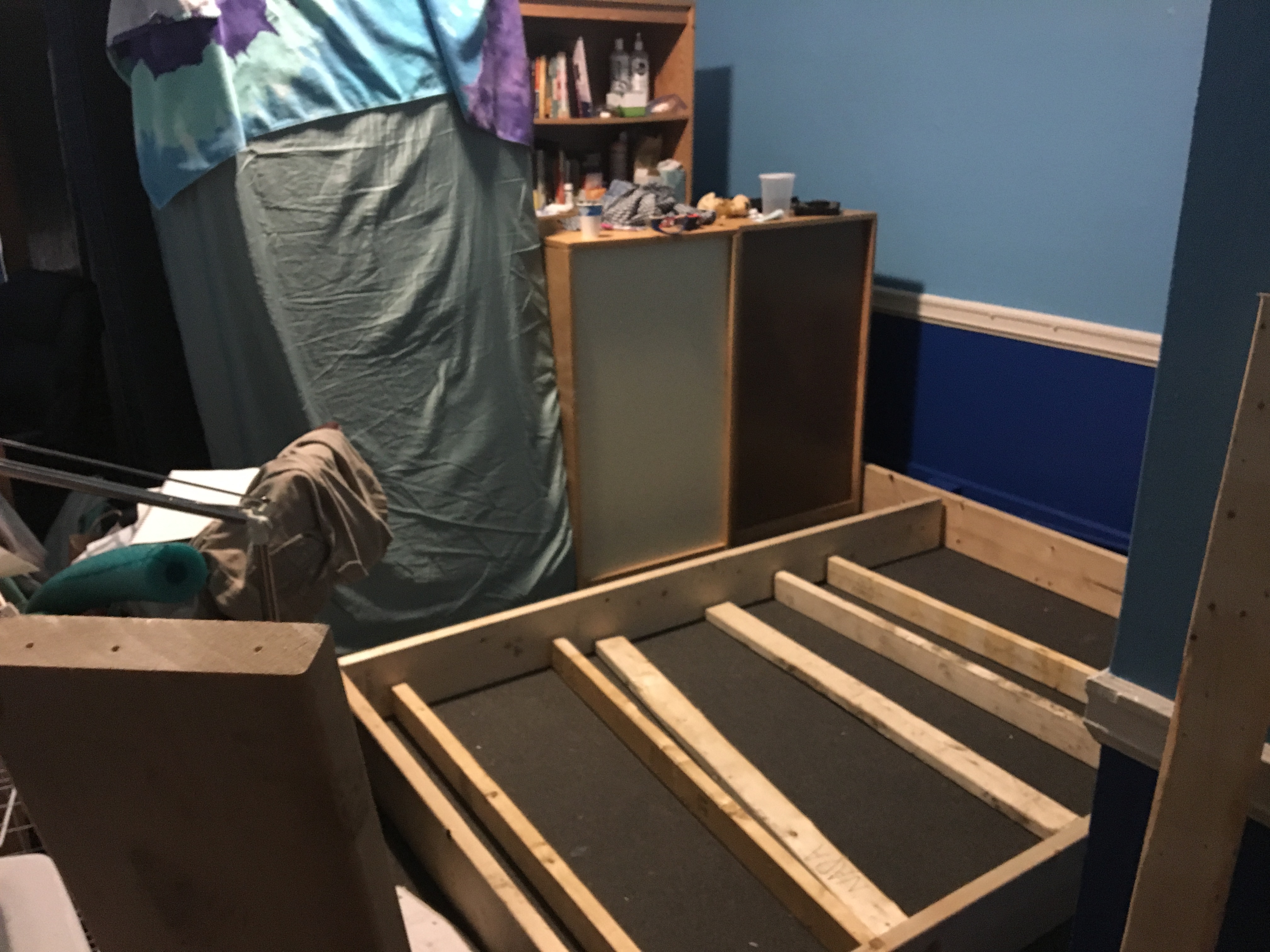 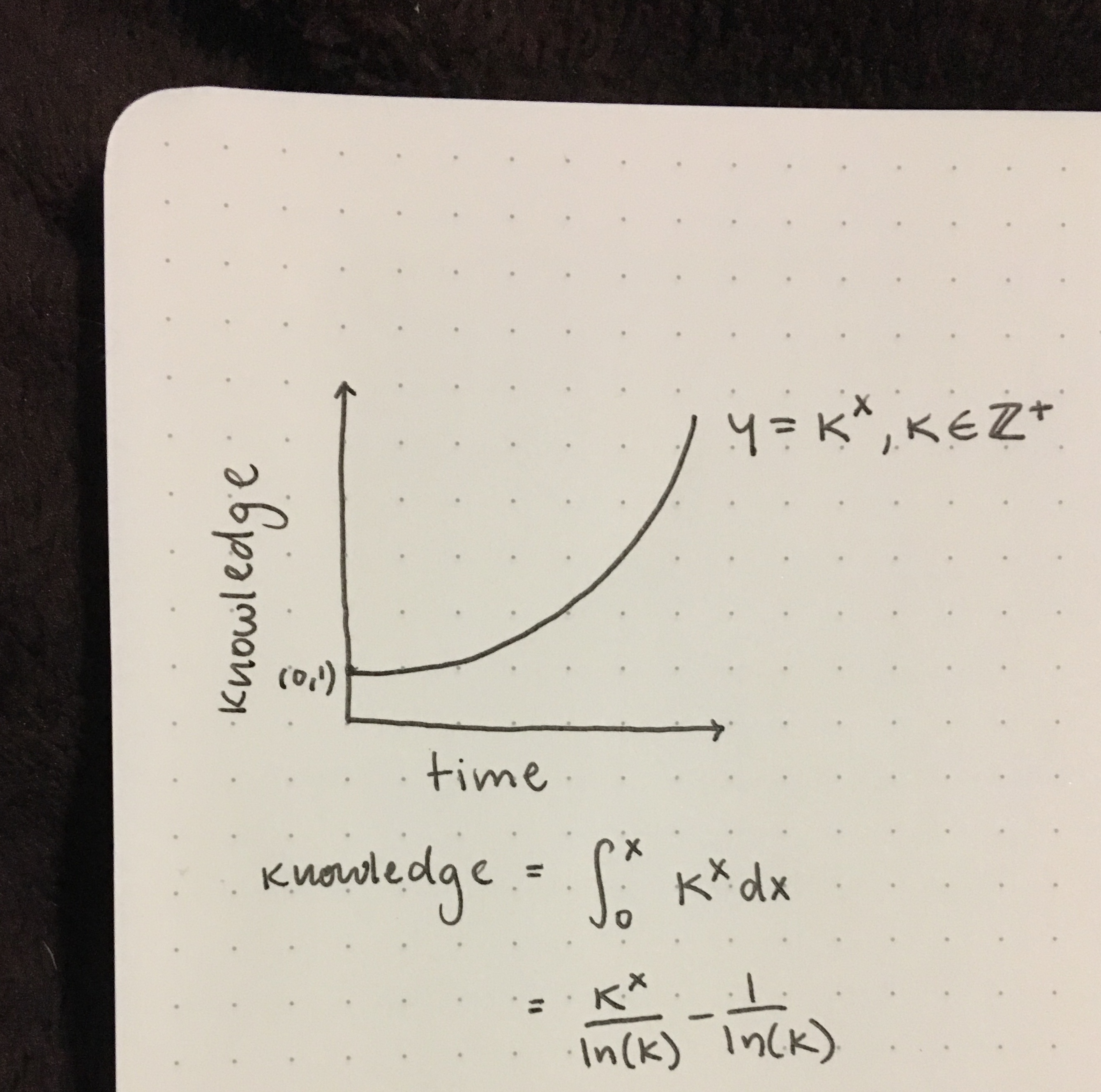 I learned soooo much over the course of this project. (Also, started drawing this graph and then my calc habits just took over whoops)

This is taken from basically one step inside the door. You may note: all our crap pushed into the back corner of the room; the approximately-square outer bedframe, which took us way longer than it should’ve to get right; the haphazard bed slats, which were not yet drilled in.

That’s construction, baby. To save you from the numerous gruelling hours of drilling, screwing up, accidentally kneeling on wood chips, etc. which Anika and I faced, I will fast-forward to 11 pm, when all the slats were in place. (We broke for dinner, and a capella/dance auditions, so fear not, it didn’t take the whole time.) We also put in little blocks in the corners so that when we rested the frame on our 4×4 pillars, it would line up just right. 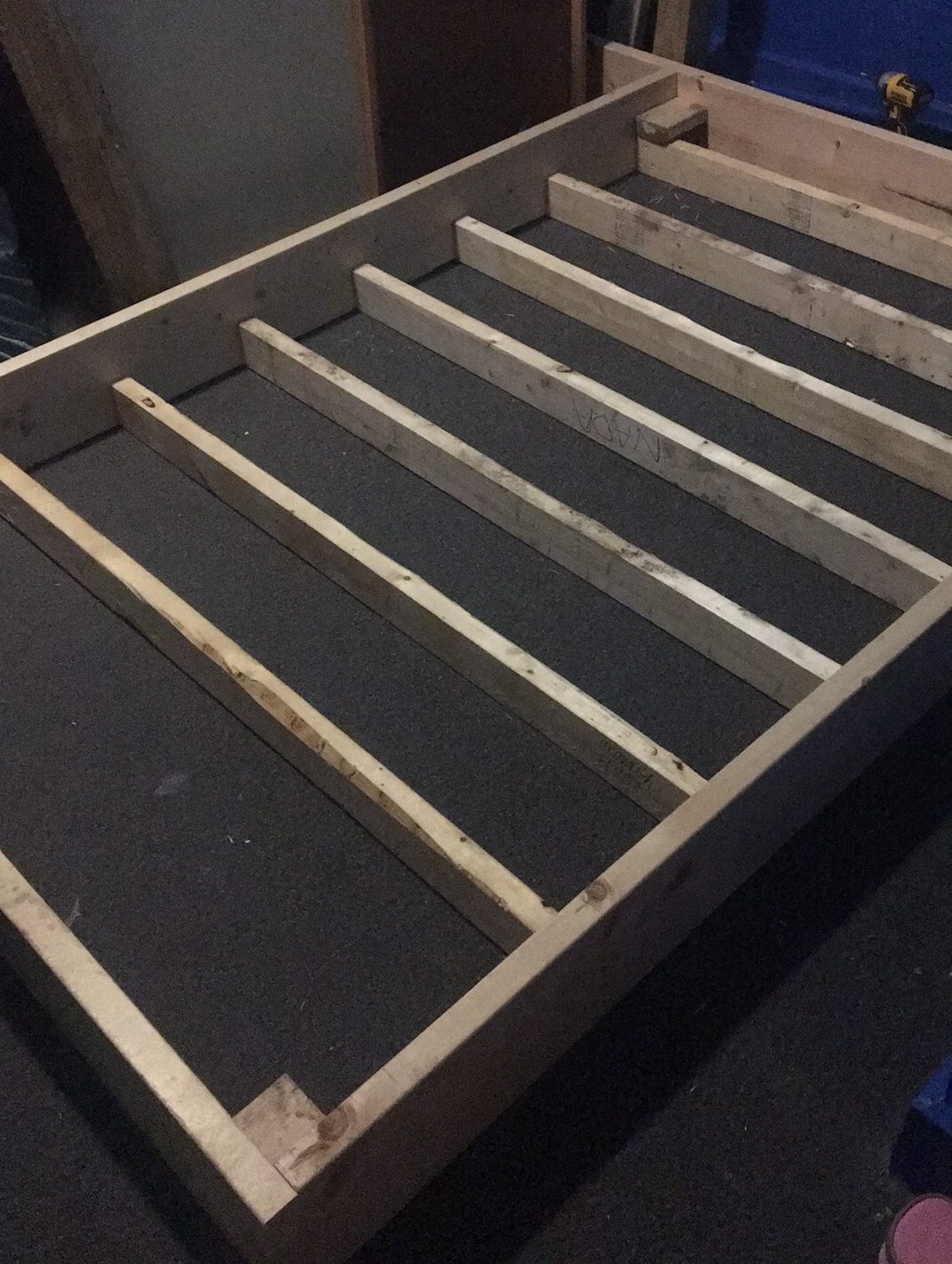 The next step: picking it up!! This required the help of other people who were willing to stand there while we slotted in and attached all the 4x4s. Every other frosh on hall was also building one of these, so over the course of the week, we did a lot of lifting. I started to call them “loftraisings” because they remind me of the old custom of barnraising, where a whole community or village would help newcomers build a barn as a social event. It’s basically the same deal: you hang out, chat, lift some heavy things. People are always on hall, chatting in the hallways or working in a lounge, and every time one of the freshmen would ask if anyone wanted to help them lift their loft, there were always volunteers willing to drop whatever they were doing. I’m really grateful to be part of a community where people help each other in any and every way they can.

We built and raised one loft on Saturday, as we’d planned, and the second one on Sunday. (We did not do anything else that weekend, like, for example, homework.) I would say it’s miraculous that we actually finished according to plan, except I’m pretty sure in the plan, I wasn’t drilling in the penultimate ladder rung at 11.45 pm. We skipped the last rung — and slept in the air that night, giddy with exhaustion and success.
Moving the furniture would come later; fixing the ladder would come later (…it hasn’t come yet); but dang, in that moment, it felt so good. I did something I didn’t know I could do, and I get to benefit from it every night. (We have So. Much. Floor. Space. Now!!!!) Life is good 😄 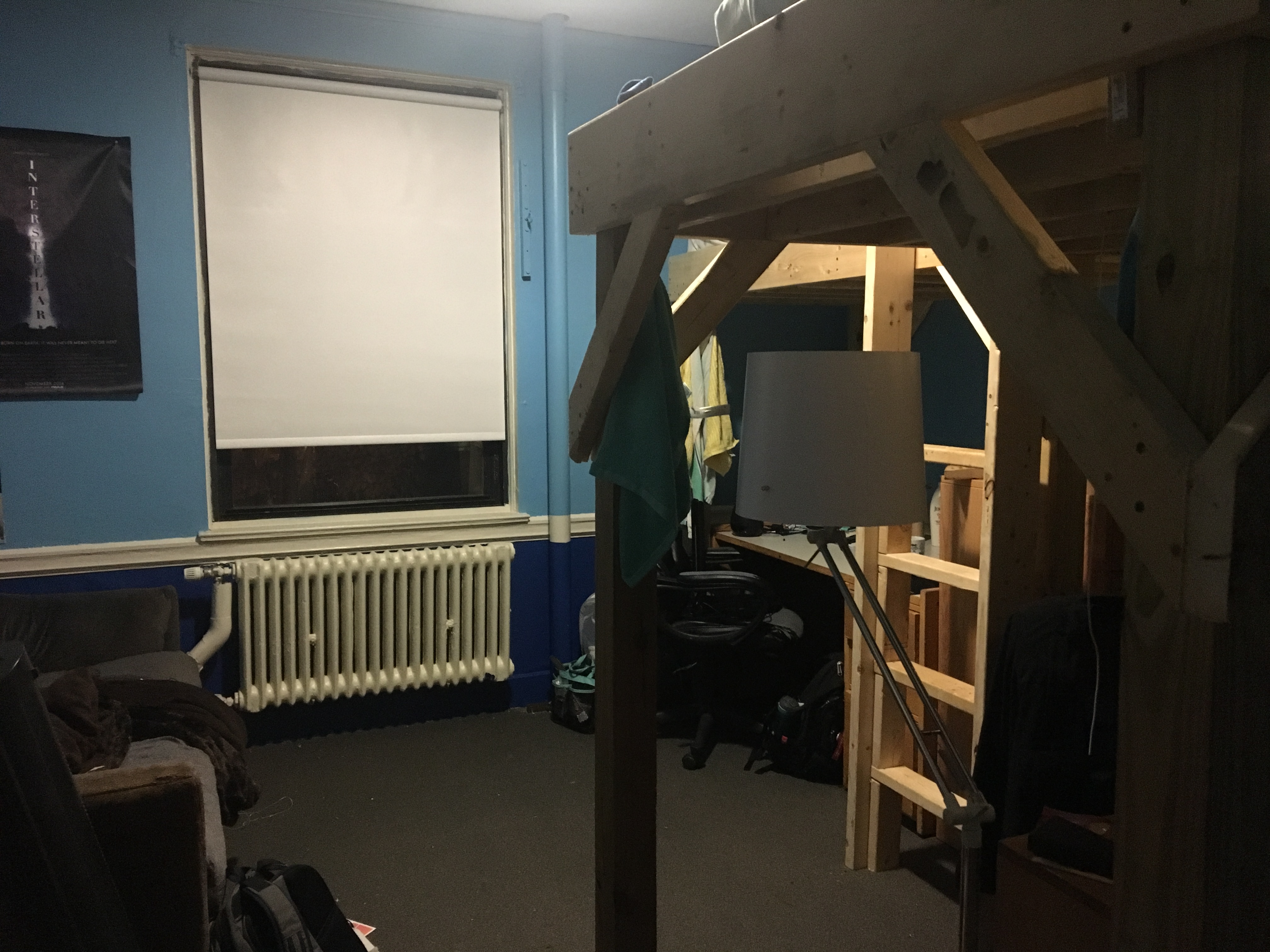