This past Friday after finding out about his passing, Jessica and I learned that we both had known Professor Winston .  We shared with each other how he made an impact on our lives and also learned about other students’ unique stories with Prof. Winston.

Like he would say, ‘You won’t be alone if you take care of your people’, so we highlight his legacy through our collective memories.

Do you know that feeling when someone is explaining something to you multiple times, but you’re just not getting it?

And you feel bad, because they keep trying even though you can see that they’re frustrated?

But despite trying your best, nothing becomes clearer.

That is how I feel reading “Patrick Winston died early this morning”.

It’s really difficult for me to process that I will no longer see Professor Winston, one of the few professors who managed to make MIT feel like home. 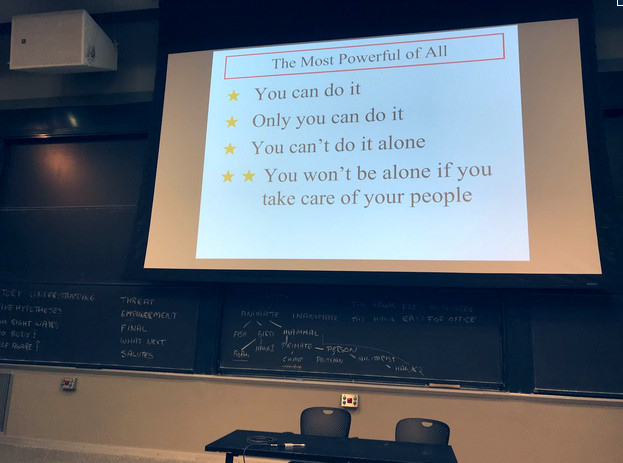 Everyone who knows me knows how much I loved and admired Professor Winston. There are many geniuses at MIT, but not all of them prioritize and humanize people the way Professor Winston did. I took this picture during the last 6.034 lecture, when he was summarizing the lessons he wanted us to take away. On that day, there were many other slides but he spent a great deal of time talking about how important it was to prioritize togetherness (especially in a place like MIT where it is easy to isolate yourself when overwhelmed with work).

Each lecture he taught enriched me technically and shaped me into a better member of my community – In both 6.034 and 6.803, he would either start the class with an interesting short story and accompanying life lesson, or end it with advice he had picked up from the author of the paper we read.

He was an epitome of a stellar professor – one who balanced his wealth of technical expertise with valuing people so beautifully that to me, his biggest teaching instrument was his exemplary lifestyle.

I am grateful to have experienced someone who thoroughly understood and contributed to the magic of MIT, and I pray that his soul finds rest. 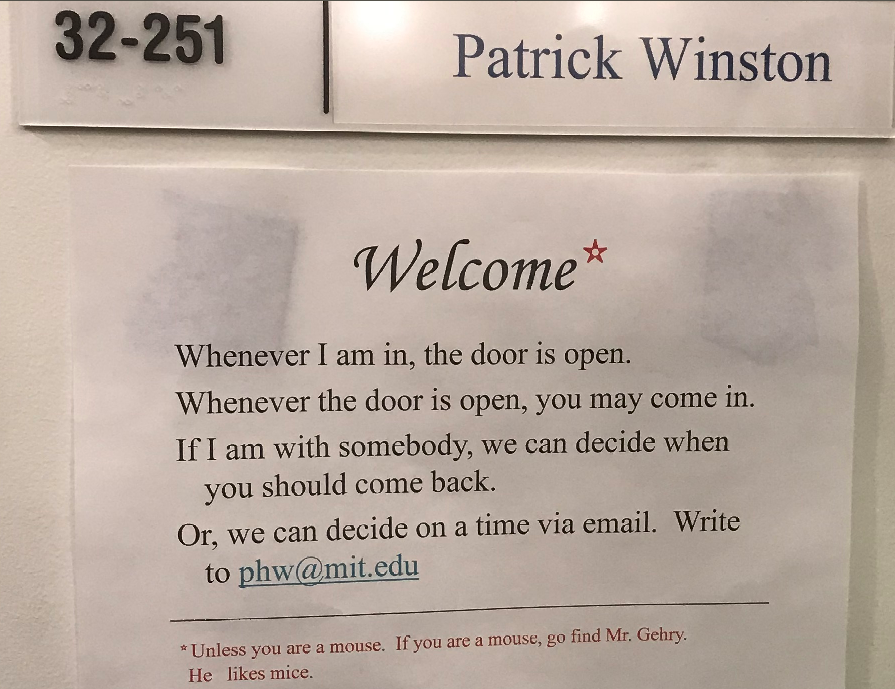 Caption: I took this picture before our last chat because I thought it was cute. I think it does a good job capturing all that I want to say. Rest in Peace, Professor Winston. You were my favorite – Jessica Quaye 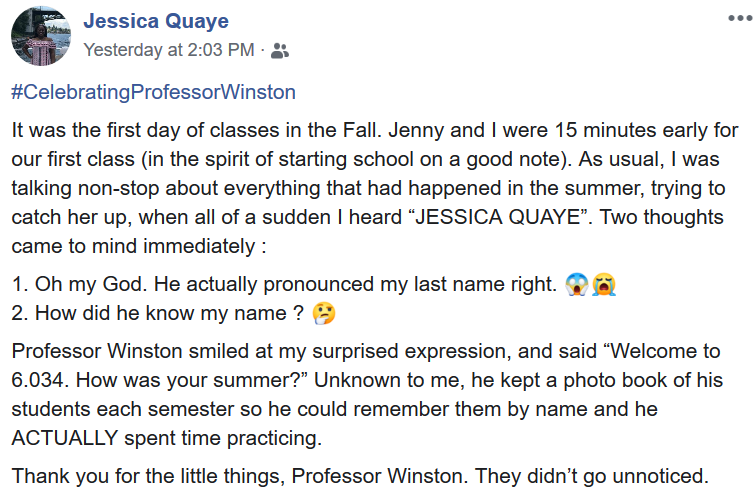 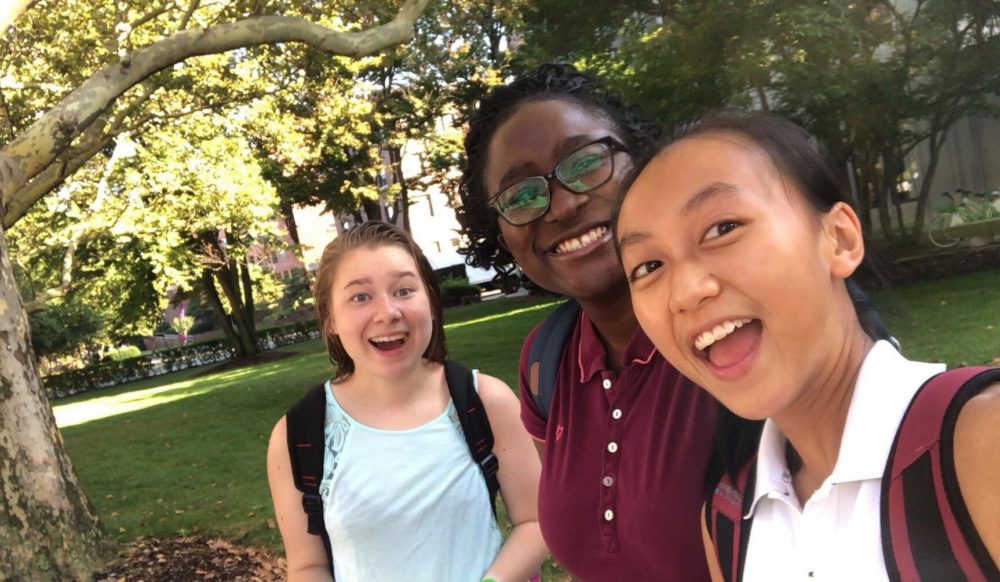 Every year MIT solicits nominations for Institute awards, one of which is the Excellence in Mentoring award given to a professor who serves as an advisor.

The 2015 recipient of that award was my freshman year advisor, Professor Patrick Winston. In my nomination of him, I wrote about the impact his mentoring had on me, particularly that year. Since it’s been five years later and I’m even now still processing his passing, I think the words from back then convey what he means to me best.

“As a freshman this year there were multiple traumatic experiences with the suicides, one of which early on I was very personally affected by.

He took each time afterwards to email me and ask me how I was, and even that genuine question, invitation to talk, was incredibly appreciated.

He’d always invite each of his advisees to talk in his office and very often had open doors for me to pop in when I’m around in Stata.

He never seemed in a hurry to have me go after meetings and we’ve had wonderful philosophical and personal conversations. However, one of the most important things he’s said is that:

Making sure my expectations for myself were reasonable, and stressing the importance of balance was incredibly echoing later on as stress piled up, and it’s been a pleasure to have him as my first freshman advisor. – May 15, 2015” 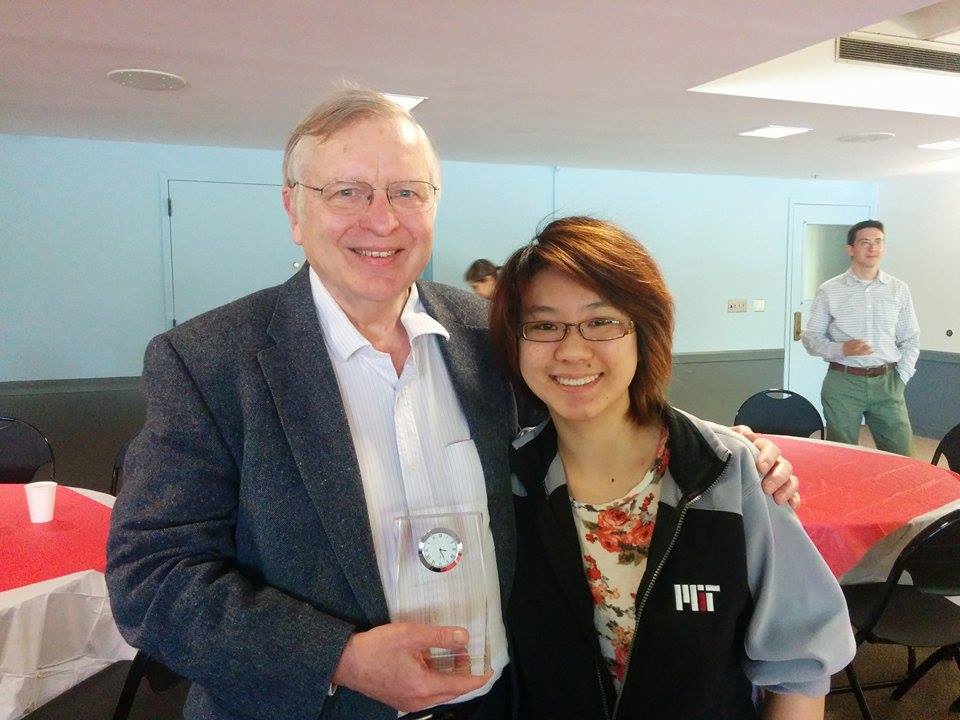 Prof. Winston receiving the Excellence in Mentoring Award May 2015

“… Patrick’s humanity and his dedication to the highest principles made him the soul of EECS. I called on him often for advice and feedback, and he always responded with kindness, candor, wisdom and integrity. I will be forever grateful for his counsel, his objectivity and his tremendous inspiration to our students. MIT will miss him. I will greatly miss him too.  – L. Rafael Reif ”

Full letter from Reif will be posted at president.mit.edu 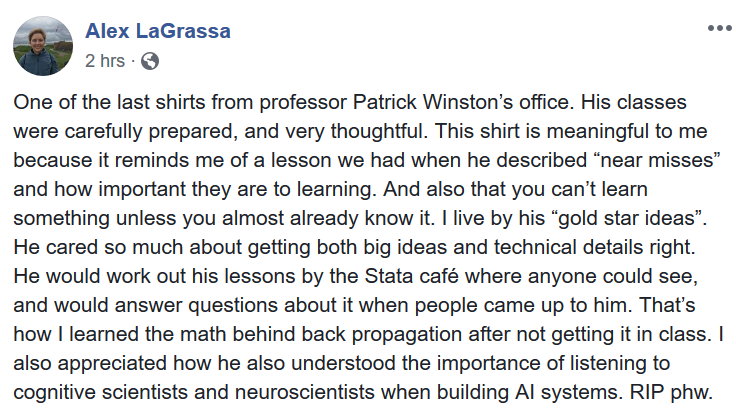 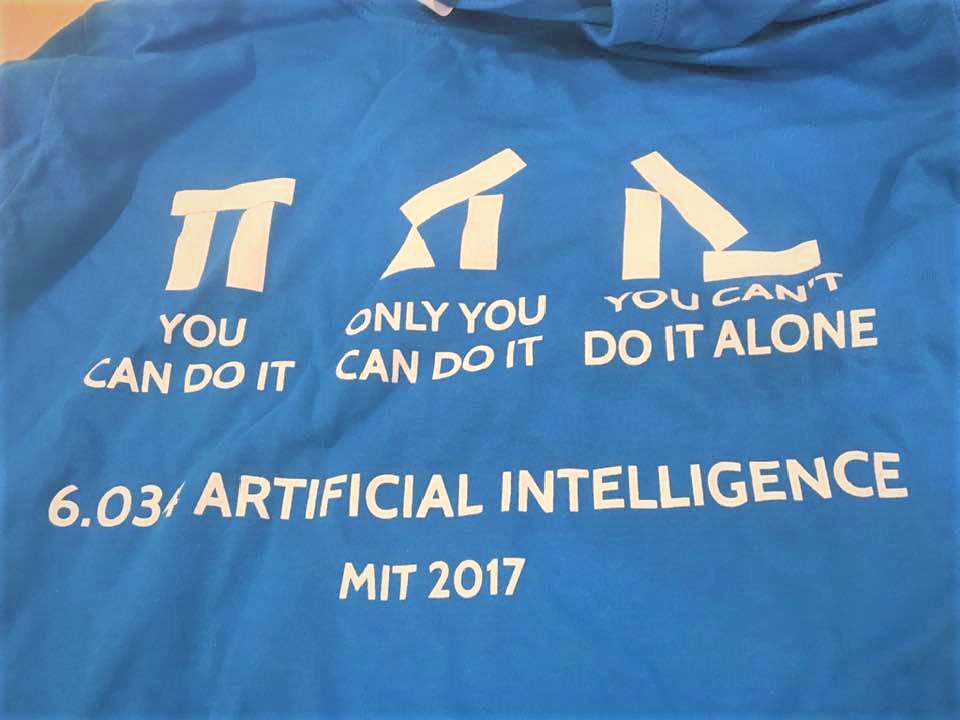 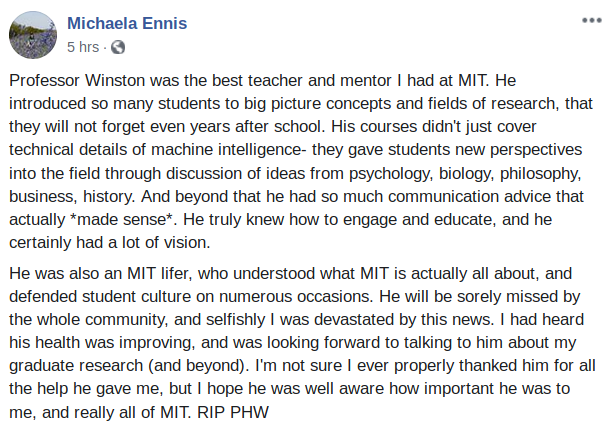 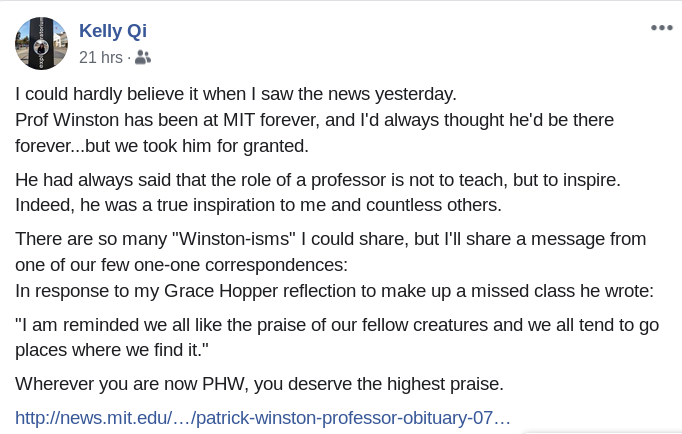 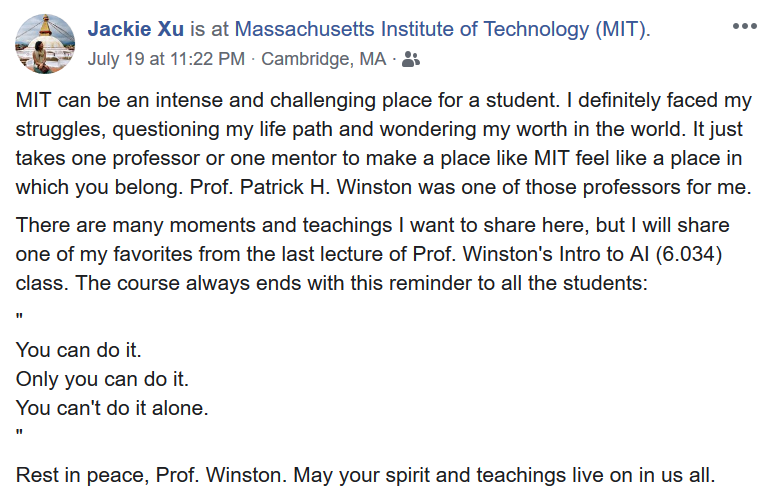 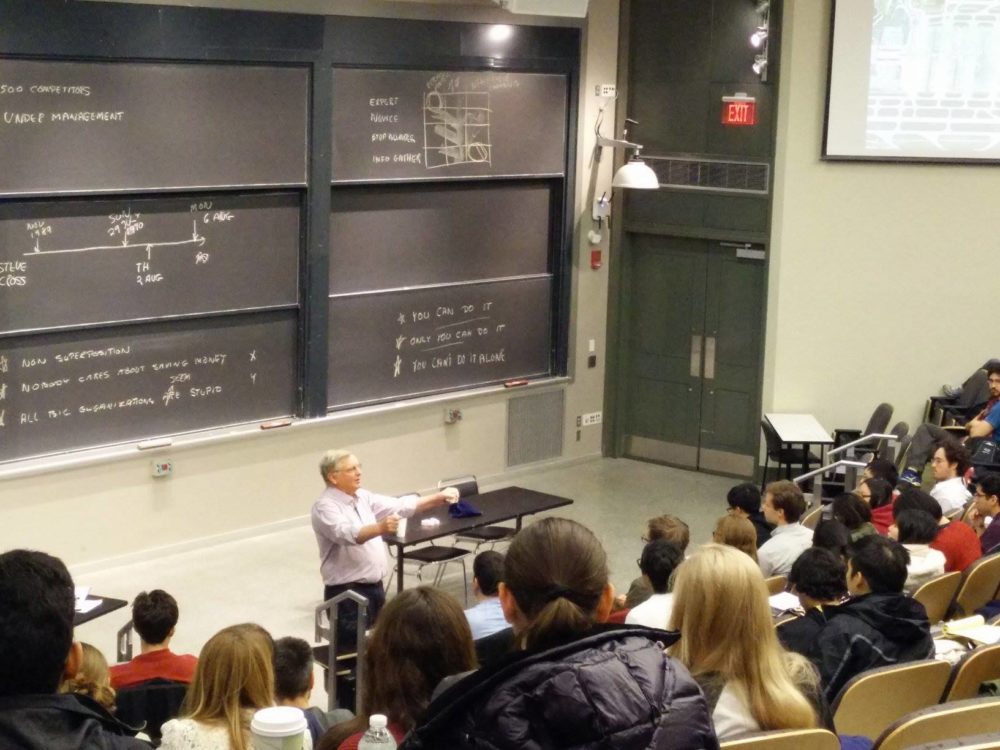 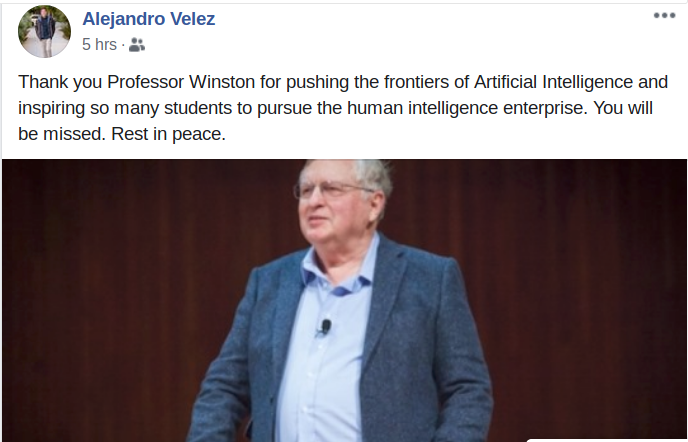 Also I am sure that many more people have their stories to tell. Just email me at [email protected] if you want to add yours (Doesn’t have to be Facebook lol).