a salmonella saga by Ankita D. '23

I didn’t leave the MIT bubble much my freshman year. hell, I barely left my dorm. there was so much going on all the time that I didn’t bother trying to venture out into Boston very often.

over the summer, however, I spent a good chunk of my free time exploring Boston, and made a few weekend trips to New York. these helped me realize how feasible going places is, which means I’m definitely going to spend more time off campus going forward.

something that’s less feasible? going to a four-day music festival in Delaware. as an MIT student, this seems unthinkable, given how much work we have at ALL times. surprisingly, I was able to pull it off without much stress, and all it took was being willing to miss Lizzo and Megan Thee Stallion….a small compromise,⁠01 you know the stress is <em>bad</em> when you're ready to miss these two. indeed………….

I decided to go to Firefly back in May. the tickets were expensive, but since I was manic about wanting to do fun things post-COVID (lmao), and since I had already planned on going to a festival in Tennessee (which was much farther), Delaware seemed reasonable. me and two other friends bought tickets together, hoping that we could convince more people to hop on board.

as we got closer to time, I started to question how feasible going was. Delaware is pretty far–at least seven hours–and the train would take us an hour away from the festival grounds. knowing this, we decided to rent a car, which covered the transportation problem. since we had bought a campsite, we borrowed a seven-person tent from a friend, so housing was resolved.

then there was the problem of packing everything we’d need to sustain ourselves for four days. I’m the type of person who cannot stand it when I’m not prepared for something I easily could’ve prepared for, so I read extensive festival survival guides and bought a lot of stuff on Amazon. while this was happening, three more friends joined our group! two of them were coming only for the weekend, though, so we would still have enough space in our car on the way down.

we planned to leave on Thursday around noon. I went to my only class of the day, which was a Machine Learning lab, and then sprinted back to my dorm to grab all my things. we headed out immediately to go grab a mattress pump from someone in our group who was coming for the weekend. unfortunately, driving in Boston is a nightmare, so it took us over an hour to get to her! with that setback, as well as three different instances of traffic, our trip clocked out to be over nine hours. we pulled into the festival grounds at 9:30 and had to wait an hour for two people to grab their wristbands.

finally, we started heading for our campground, but went down the wrong path thanks to a poorly placed sign. since the right road was a few feet away, we thought it would be okay to just…drive through the grass and onto the path, but that turned out to be a terrible, terrible idea; it had been raining in Dover for the past day, so the ground was muddy as hell. and as if we were in a cartoon, our car got stuck. TEN MINUTES BEFORE BILLIE EILISH WENT ON!

it was as horrifying as it was hilarious. the rental car refused to budge even when we floored it, and even splattered mud all over me for good measure. we tried pushing it, but to no avail. then, someone had the genius idea of putting our tent tarp down for more traction. it did the trick, and with the help of a random stranger, we pushed the car back onto the path.

thanks to adrenaline and a lot of running, we were able to make it to Billie Eilish’s performance.

that was night one! woo! 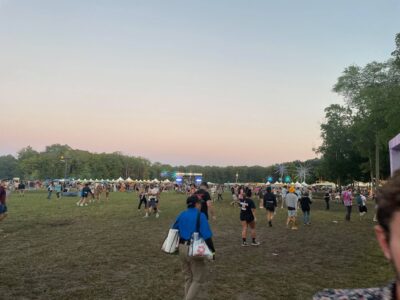 the second and third days passed in a blur. we saw Tame Impala, Glass Animals, Cage The Elephant, The Killers, and a few other artists that I really love. I didn’t realize that music festivals involve a good deal of standing still for hours at time, which means eating and drinking and going to the bathroom is exceedingly inconvenient. I also didn’t realize that music festival food isn’t the most trustworthy, because as soon as my group returned home, I came down with a fever.

I thought it was COVID at first, but as food poisoning symptoms began to arise and I was rendered completely immobile, I realized that it was a different demon. when one of the people in my group found a thread on Reddit reporting symptoms of salmonella after eating the same chicken we had, we were convinced. it was hilarious since we all enjoyed the chicken a lot. in fact, we looked forward to eating the chicken the day after we tried it for the first time!

my week was horrible. I was already behind on work, but also felt like shit and had to attend in-person office hours virtually, which was annoying. I would go to sleep, wake up, go to office hours, and go back to sleep. I was unable to leave my bed for four days straight aside from extended visits to the bathroom. it was abysmal.

after this experience, I realized two things: one, leaving the MIT bubble and venturing into the wilderness is an amazing way to spend your time. two, catching up on work as an MIT student after one weekend of doing nothing is very rough, and falling ill after said weekend is the kiss of death.

this is to say, if you want to go on a weekend trip, you have to either frontload all your work or just not go, especially if it’s not early into the semester!

despite everything that happened, I’m glad I went to Firefly. it was super fun and helped me realize that festivals are a very viable means of meeting up with friends post-college. it also was a packed weekend for music festivals; dozens of other MIT students I know went to Governor’s Ball, so it was a dope collective experience for us. I’ll definitely go to festivals in the future, but I’d rather eat grass than ever touch food stand chicken again. 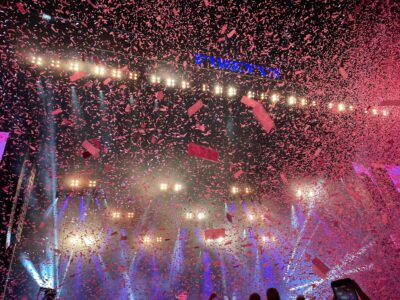