Advocating for Science on Capitol Hill, Part 2 by Anna H. '14

Rush Holt is in the room, but most people haven’t noticed.

To be fair, he’s a name rather than a face for most of us: the PhD physicist-turned-politician, one of two physicists in Congress, now the US Representative for New Jersey’s 12th congressional district. I happen to know what he looks like because an assistant addressed him by name when I passed by in the hallway.

Now, I’m in a big room scarfing down bacon and coffee with over a hundred other representatives from science and engineering organizations, waiting for Rep. Holt to give a speech. And now that the Congressman is physically in the room, the internal conflict begins.

I think, I will probably never have the chance to meet Rush Holt ever again. Then I think, I have nothing to say to Rush Holt, and he probably doesn’t have anything to say to me since I’m not one of his constituents, and the last time I was in New Jersey I was repulsed by the smell of industrial fumes along the New Jersey Turnpike. Finally, I gather my wits and conclude, Who cares?

So, I walk over to where Rush Holt is standing. Well, actually, I walk up to Rep Holt’s staffer (Sean) and thank him for giving such a helpful presentation at the AAAS yesterday. While Sean and I are talking, Congressman Holt walks up to me.

Rush Holt: Hi, I’m Rush Holt.
Um, no kidding.
Me: I’m Anna Ho. I’m an undergraduate at MIT majoring in physics.
Rush Holt: Physics!
Me: Yes, I gather that we have something in common!
Oh, dear. Someone sound the “socially awkward” alarm.
Rush Holt: Who do you work with at MIT?
Is Rush Holt intimately familiar with MIT’s physics department…? I give him a few names. He asks where I’m from and what my research is about. We talk about pulsars, and at some point Rush Holt says “yes, I know what pulsars are. I’m a physicist!”

At this point, a number of people are trying to get Rep. Holt’s attention, to tell him that it’s speech time. I excuse myself and go sit with the rest of the American Astronomical Society delegation, as the Congressman heads to the podium. 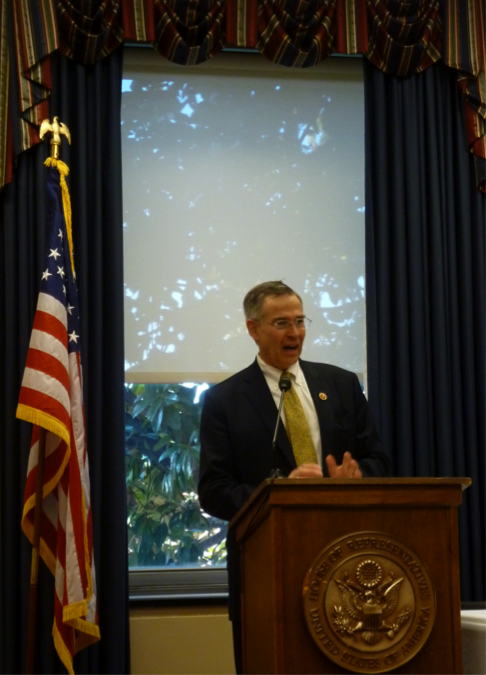 I miss his first few sentences, because I’m busy wondering how many people can say that they’ve talked to a Congressman about pulsars.

The United States House of Representatives occupies three office buildings along Independence Avenue. Breakfast with Rush Holt took place in one of them. We arrived there at 7:30am and waited in a long line to walk through metal detectors. The nice view of the Capitol Building nearly made up for the fact that it was FREEZING outside (Dear Washington DC: that was a pitiful excuse for Spring.) 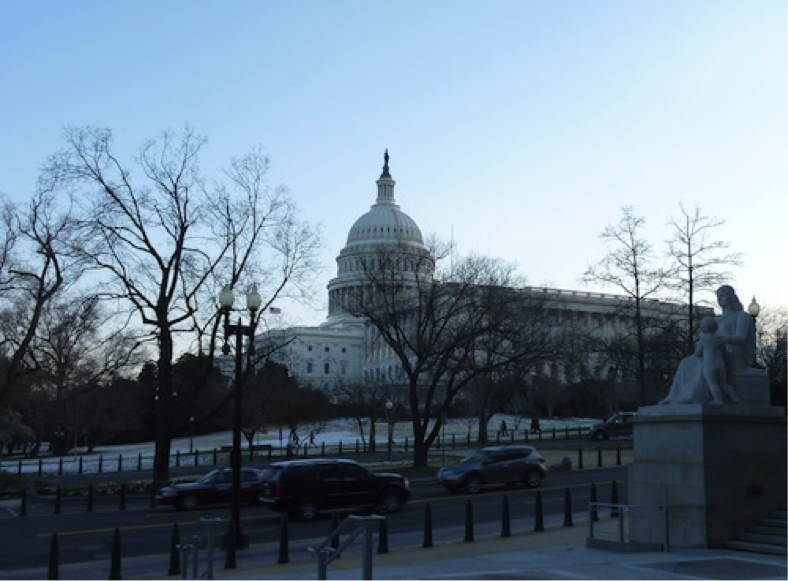 I’ve been on Capitol Hill for two days. Two days were enough to learn that things here unfold on VERY SHORT TIMESCALES. Yesterday, for example, we learned about a proposal to raise the FY 2015 NSF (National Science Foundation) budget from $7.25 billion to $7.5 billion. We were encouraged to urge our representatives to sign onto this letter. In order to urge intelligently, we had to memorize the following: it’s a “Dear Colleague” letter addressed to Chairman Frank Wolf and ranking member Chaka Fattah of the House CJS Appropriations Subcommittee, Congressman Butterfield’s office is leading the letter, the staff contact is Dennis Sills, and the deadline for signing is 1pm March 27.

We are meeting with our representatives today, and March 27 is tomorrow.

My team is comprised of myself, a graduate student from Georgia Tech, and an astronomer from the Harvard-Smithsonian Institute for Astrophysics. This is our schedule for the day:

I’m in charge of the meetings with Representative Capuano and Senator Markey. I secured our appointments through a combination of e-mail exchanges and embarrassing phone conversations.

Now, it’s 8:30am and time to find Rep Clark’s office. I hyperventilate a little bit and skim my notes from yesterday.

My name is Anna Ho, and I’m a constituent living in Cambridge. I’m a senior at MIT majoring in physics, but today I’m here representing the American Astronomical Society. In the fall, I’m going to start a PhD program in astronomy – but when I started college, I didn’t think that I was cut out to be a research scientist. The summer after my sophomore year, I did an internship funded by the National Science Foundation. I loved it so much that I went back the next summer and did it again. I learned that I wanted to do research because I had the opportunity to try doing research. And I had that opportunity because of this program. I became a scientist because of this program, and I would be very happy to tell you more about it.

You can learn a lot about a politician by looking around his office. For example, Representative John Lewis was one of the leaders of the African-American Civil Rights Movement, and you could probably piece this together from the shelves full of awards and medals. A Martin Luther King Jr. Dr. sign hangs over one of the big wooden doors, with the following quote: “Public officers are the trustees and servants of the people who are at all times amenable to them.” There are Coca Cola bottles everywhere. We had a similar experience in Senator Chambliss’s office later in the afternoon; apparently this is a Georgia Thing. Another Georgia Thing is peanuts. Peanut bowls in both offices prompted my Georgia Tech teammate to exclaim “Georgia peanuts!”

Similarly, stepping into Representative Capuano’s office feels – at least, to this Massachusetts resident – bizarrely like stepping into a museum of home. The first thing I notice is an MIT flag on the wall, dangling with flags from all of District 7’s many universities and colleges. The tables are covered with editions of the New England Journal of Medicine and local newspapers. On the wall is a picture of Jordan Hall, where I once went to watch Davie ’12 sing Mendelssohn’s oratorio “Elijah,” as well as a plaque about Reach Out, an organization I volunteered with as an MIT freshman. Senator Markey’s office is less home-y, so while waiting for our meeting to start I sit on the long dark red couch and stare at framed pictures: over the fireplace, Markey with Obama and Markey with Ted Kennedy, on a table to my right, Markey with Obama and Nancy Pelosi, and by the door, an aerial picture of Boston and the Charles, MIT just out of sight.

We meet with Representatives in the morning, eat lunch, then meet with Senators in the afternoon.

We stand up when the staffer enters, shake hands, introduce ourselves, sit around a table. When it’s my turn to lead the meeting, I tell the staffer about NSF-funded research internships for undergraduates (REUs), and how having the opportunity to do science research over the summer is what made me decide to go into science research as a career. Nicole (from Georgia Tech) chimes in to say that she did an REU as an undergraduate as well, and that it’s also what inspired her to continue in science. Kelly (from Harvard-Smithsonian) then explains that she did an REU as an undergraduate and now runs a Solar Physics REU. I emphasize that NSF funding is crucial not just for building telescope facilities and paying researchers, but also for maintaining these important educational programs.

Rep. Capuano’s staffer is very interested; he pulls out a notebook, writes down the name of the program, takes notes on what we’re saying. He tells us that Capuano’s office is totally on board with all this science funding stuff, that they’ve already signed onto the NSF Dear Colleague letter, that having anecdotes like this from us is very helpful as they try to convince others to do the same.

In between meetings and on the way to lunch, we walk through underground tunnels and keep an eye out for Congressmen, who are identifiable by the pins they wear. We run into Michele Bachmann while waiting for an elevator and catch a glimpse of Ted Cruz. We split up after lunch and I head over alone to the Senate building. There’s a long line inside the Senate Café; I sit at a table holding Paradise Lost, watching white shirts and pastel-colored ties flash by. The café is full of handshakes and sandwiches are tossed into paper boxes. No one seems to have time to sit and eat.

And now, the Senate meetings. Turns out that Elizabeth Warren is holding a meet-and-greet: 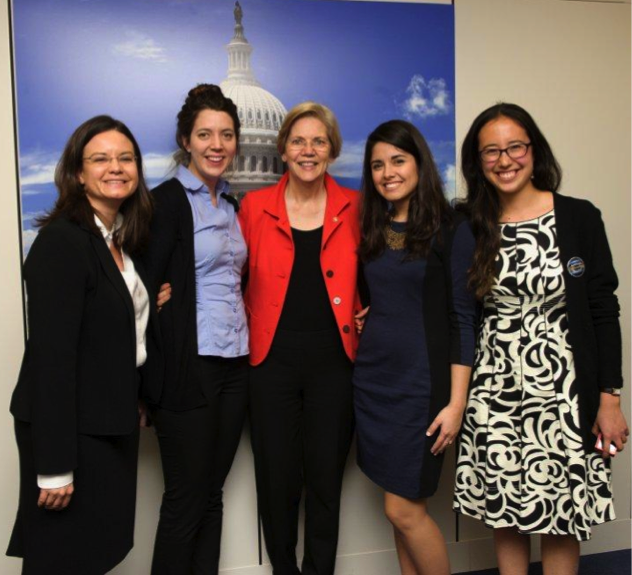 That afternoon, there is only one moment that (initially) feels like a disaster. We’re sitting with Sen. Markey’s staffer, Dan, and I’m running the meeting. Dan has a PhD in physics and worked at the LHC for a while, and makes it clear from the start that his office is already on board. My brain says you have an action item! and my mouth starts moving on autopilot:

Thinking quickly,
Me: Well, is there an equivalent letter in the Senate?
Dan: No, but I would be happy to start one.

Dan: It’s really helpful when scientists come in and give concrete suggestions for legislation they want to see.

Wait, you want us to do that? Does anybody realize this? Does anybody understand the system well enough to even know what to ask for?

Dan asks us to e-mail him the House letter.

Still in shock, I offer my contact information as usual. Dan says that he will actually be in Cambridge in a few weeks, and would be happy to take me up on the offer of an MIT tour.

A week later, Josh Shiode e-mails the AAS delegation saying “Thanks to one of our teams, Senator Markey’s office is leading a Dear Colleague letter in the Senate that closely mirrors the one in the House in support of $7.5 billion for NSF in FY 2015. Please send the below text and attached pdf to each of your Senate contacts and urge them to sign on to support this effort.” A couple of days later, Dan e-mails me to say that the letter is circulating and 11 senators have signed on so far. “Thought you’d like to know!”

A week after that, I meet Dan in MIT’s Lobby 7. Hansol ’15 gives us a tour of Prof. Brad Pentelute’s chemistry lab and two graduate students show us around the Man-Vehicle Lab. Between labs (getting around MIT involves a lot of walking) Dan and I discuss how to get scientists more involved in advocacy, and what a scientist’s role in advocacy is in the first place.

Eventually, Dan has to go get work done so I drop him off at the Stata Center. We shake hands, and I say that I’ll be in touch. I mean it.