I’m sitting on my bed, back against the windowsill and sneakered feet dangling off towards the garbage can.

There’s a box sitting on my otherwise-empty bookshelf, a shirt and a purse strewn across my desk, an empty closet, a pile of boxes on top of my chest of drawers, and two full suitcases + three gigantic full boxes on the floor. There are sheets on my bed, supporting three pillowcase-less pillows.

I can’t remember the last time I just sat down and hung out – I am totally wiped.

Time always accelerates through the end of summer; one day, I was sitting in the office casually analyzing pulsar data, then suddenly I had three days before my final presentation and I had just found out that there was a small magnetic field gradient across the parsec scales of our globular cluster, then it was one day before my presentation and I was throwing a PowerPoint together (two excerpts slides below) and breathing into a paper bag and drinking cup of tea after cup of tea, then suddenly it was the day of my presentation and I was wearing a nice dress and make-up and practicing my talk in the library. At 2:50pm, Carl and his grandma arrived (I invited them.) At 3pm, Raphael gave a talk on his Iapetus research, and then it was 3:30 and I was standing in front of a few dozen professional astronomers (+ Carl and his grandma) explaining and defending my work and occasionally glancing at my research mentor to see if he was smiling or frowning. He was usually smiling. 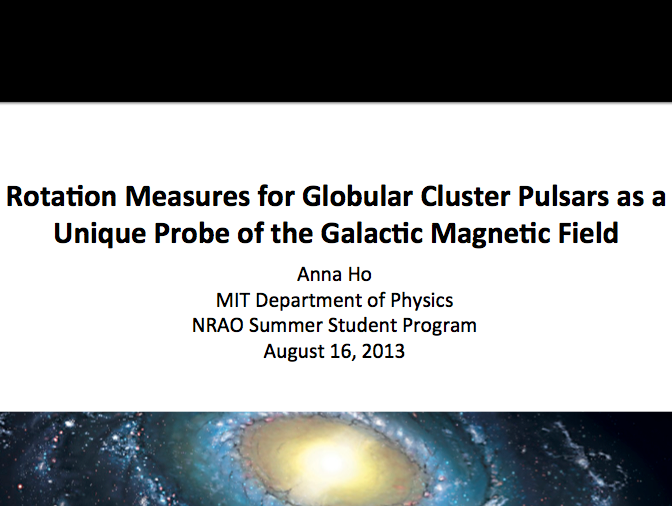 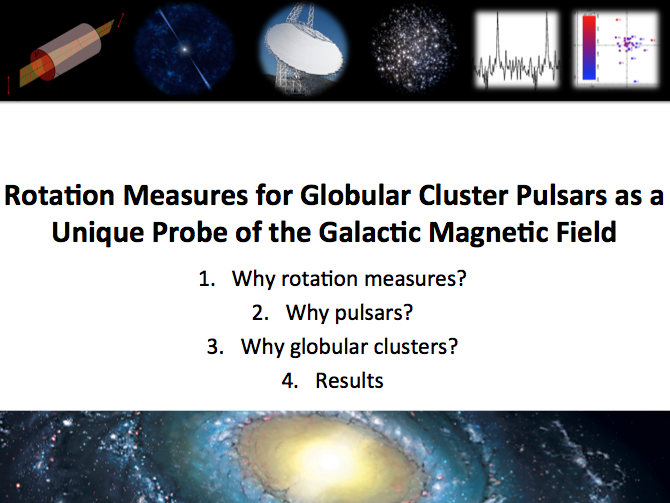 Then my internship was over. I scooped the contents of my desk into a recycling bin, chatted with my mentor about graduate schools (AHHH!!!!!) and fellowships (AHHHHHH!!!!!!), and said goodbye to the NRAO, and the building in which I decided to become an astronomer insteaad of a neurologist.

I hopped in Raphael’s, went out to dinner, then helped him move all his stuff from his apartment to his car. We drove to the McCormick Public Observatory to give talks, mine on pulsars and Raphael’s on the exploration of Mars (title slides below). Carl periodically jumped up to chime in, which was literally the most adorable thing I have ever seen. 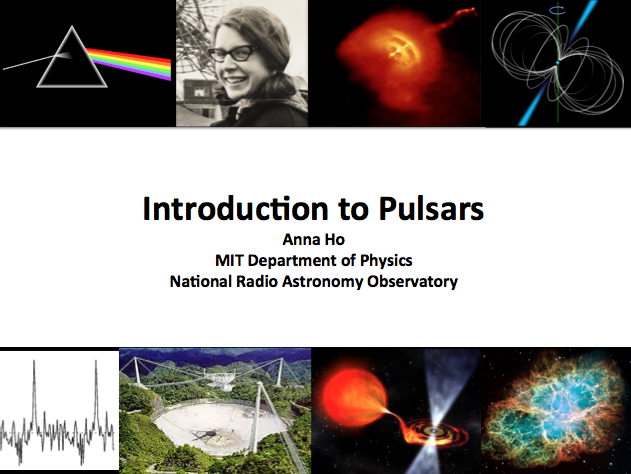 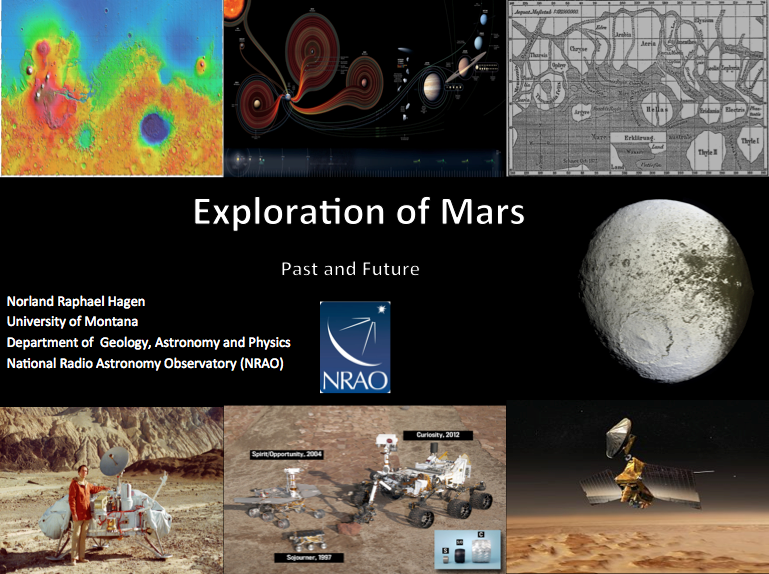 Then our last public night was over. I unplugged my dongle, put away my laptop, thanked Ed Murphy, and said goodbye to McCormick, the building in which I learned (one year ago!) that I can be both an astronomer and a public educator – that being a scientist doesn’t prevent you from teaching and reaching out and engaging with the community (I personally think it obligates you.)

Then it was time to start (START!!!) packing. I frantically threw stuff into bags, while Raphael helped me out with my laundry. Suddenly, Raphael was struck by the idea that we didn’t have to wait until morning to leave — we could start driving at NIGHT, make it a few hours, sleep, then continue in the morning. That would break up the driving, and reduce the amount of traffic we’d have to deal with. Fine. Finished packing, returned my house keys, hugged my housemates goodbye – and suddenly I was no longer living in Charlottesville. I said goodbye to the brick house on Observatory Avenue, where I had spent so many hours with new friends.

We started driving. We made it about an hour and a half out, before we decided that we were really too tired and should just find a place to sleep. As we pulled over, Raphael clenched his eyes shut and banged his fist on the dashboard and said something that you’re really too young to read. I glanced over. “What did you forget?”

His nice mountain bike was locked at the brick house on Observatory Avenue. We discussed the options: shipping? Expensive. Eventually I pointed out that we were really just stalling, and that we really just had to go back and get it. So, we turned around, and pulled into a 7/11 to take a power nap.

…aaaand, just like that, it was 7:30am and sunlight was streaming in the windows. “RAPHAEL WAKE UP!” Poke poke.

We drove back to Charlottesville, got the bike, got breakfast, said goodbye to Charlottesville AGAIN, and tried not to think about the fact that we’d been in the car for nearly 12 hours with a net displacement of exactly zero (and that we’d just slept outside a 7/11. Whoops.) We stopped periodically for the toilet and a snack, but otherwise pretty much drove straight through Baltimore, New Jersey, New York, Connecticut, Providence — finally, the Boston skyline appeared, and we finagled our way onto Memorial Drive and into New House.

Raphael drove like a champ. I’m still in awe.

Shortly after arriving in New House, I passed out. Then it was Sunday. I got up at noon. Raphael and I went out to brunch with my friend Sophie ’14, then met up with two of his friends from Montana, who just moved to Boston for college. The four of us wandered around the historic district and the North End, before going back to French House to cook dinner together. We made tacos (DELICIOUS!) and salad (DELICIOUS!) then played a round of Dominion (the only important detail here is that I won) before saying goodbye.

Monday. We picked up Raphael’s aunt from the airport, had a snack at Harvard Square, then picked up my little sister (Lisa ’17!) from the airport. We ate an awesome seafood dinner, then met up with Raphael’s Montana friends again for another round of hanging out and playing Dominion (I won again.)

Tuesday. Today. Raphael and his aunt left – they’re going to spend the next five-ish days driving back to Montana (through Montréal! so jealous.) I took Lisa to the student center, to get her new ID card. And now I’m sitting on my bed. In three hours, counselor training for PhysPOP (the Physics Department’s pre-orientation program) starts. On Sunday, REX (orientation) starts; I’m one of the REX chairs for French House, so I’ll spend days running around organizing activities and hosting freshmen. When I come up for air, it’ll be August 29. I’ll have a few days to (FINALLY) unpack, before registering for classes (WHAT AM I GOING TO TAKE??) — and before I know it, I will officially have begun my senior year. My last year of college. MY LAST YEAR OF COLLEGE. Where am I going to be next year? I have no idea.

I can’t believe it.