an experiment in the sounds of admissions

Earlier this summer I sent out an email to the office asking if anyone who doesn’t blog would like to be interviewed for the blogs. A few minutes later, my friend Holly responded and said that, duh, of course she would. 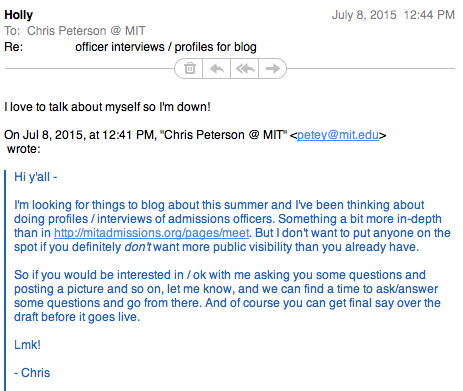 Even if you don’t know Holly, you may have received something that she’s made in the mail. Holly is a Senior Counselor for Communications, and she basically makes all of our print publications, as well as being the token #millenial on our social media. One reason I love working with Holly is because she’s always down to try anything new and creative just because it’s new or creative.

Last week Holly and I finally got to sit down and talk about ourselves. The transcript from that interview ran almost 11 pages, which seemed downright cruel to blog. So instead, we decided to post the audio to Soundcloud, so you can listen to it whenever and however you like. I listen to a lot of podcasts and radio shows, and used to run one for my college newspaper, so it seemed like a nice way to try and bring the form to the blogs.

I embedded the interview below:

This is the first time we’ve tried anything like this, so please, let us know what you thought, and what other sounds of admissions you might like to hear!