Midnight. We switched off the generator and the glaring light died. A flurry of moths, freed from the beacon that had attracted them, flew off into the darkness. Three thousand feet below us, fireworks were going off with a faint, delayed crackle. Most nights, this summit was shrouded in mist, but evidently the clouds had taken New Year’s Eve off. Despite the view, we were alone. The only people crazy enough to camp on the mountaintop were those who would travel to Brazil to study insects..

First, an explanation of who I am and why I’m posting on Anna’s blog. I’m an alum of French House. I graduated in 2012 with a double major in Math (combinatorics) and Music (opera singing). I then spent a year in Berlin, Germany, and now am back at MIT to start a Ph.D. in Applied Mathematics. Hi!

Most children grow up thinking bugs are cool; I never stopped. It started with butterflies and dragonflies, but eventually I fell in love with moths. Turns out that one in ten species on Earth (including bacteria and plants) is a moth. Many are large and colorful. Some are rare and exciting. Most are beautiful if you stop to look.

I live in the middle of the woods in Vermont (yes, I wear flannel and do square dancing), and I started photographing the moths at my home. By the end of high school, I’d found over five hundred species. Then MIT happened and I happily forgot about insects for four years in a wealth of friends, classes, and math.

During my senior year, I realized that I would have a whole summer free after graduation, and I remembered my early childhood dream of finding insects in the rainforest. Surely, that couldn’t happen, but there was nothing to lose in trying.

I searched for “moths brazil” and this was the first hit. Look, here was an organization that actually needed help identifying and photographing moths in the rainforest! Unfortunately, I also had to get there, and tickets to Brazil are expensive.

Lesson 2. If you’re passionate and determined about your project, sometimes people will support you.

I first tried to get funding through a public service program. I failed, and almost decided to give up. My application had been rejected; that must mean that my idea was silly.

As a last hope, I went to see MISTI. This program helps MIT students find foreign internships. I wasn’t looking for a standard internship, but I had nothing to lose. Half an hour later I was told I had a plane ticket. MIT-Brazil was a new program without much money, but they would be delighted to support me if I worked hard in the interests of conservation.

A CD arrived in the mail from the Reserva Ecológica de Guapiaçu (REGUA). On it were over a thousand photographs of unidentified moths. Could I please identify them all? *gulp* Well, this was what I’d asked for

REGUA is part of the Atlantic rainforest. Most of this ecosystem has been destroyed: it’s much more endangered than the Amazon. About half the species are found nowhere else in the world, and naturalists are racing to identify and protect what’s there before it vanishes forever.

Almost nobody is studying the moths. There are just too many of them! Certainly, there’s no field guide or anything like that. To identify a species, you have to search through museum collections or hope that there’s a photo on the web. Can you tell that these moths are the same?

After reading about moths and malaria and What To Do If You Meet A Jaguar, I arrived in another world.

The rainforest is a solid block of plants. There are trees and ferns and tree ferns (ferns the size of trees). There are bamboos, palms, vines, and spiny plants that you meet unexpectedly. There are wild oranges, which are green, and wild limes, which are orange. There are bromeliads – living bowls of water where the treefrogs lay their eggs. All of these plants occur right in front of you, piled on top of each other.

There are also animals, but they are harder to see. Colorful birds flash past you and disappear in the leaves, and if you find a fruit tree you may meet some monkeys. You will definitely meet some mosquitoes.

There is a constant hum of insects at any time of the day or night, so perpetual that you don’t notice it. Every so often, a screaming flock of parrots dashes across the sky and vanishes in the distance.

Moths are very considerate animals; they will come to you if you ask nicely. All you have to do is set up a very bright light – too bright to look at. As night falls, moths flutter in from the surrounding forest and flap around the light with determined fascination. They land on the bulb, on the ground, in your hair. Some are tiny, no bigger than flies. Others are the size of bats. Many are experts at camouflage, rolling up their wings to look like twigs, dropping to the grass as leaves, or blending in with the bark of the trees. So many moths! So little time to photograph them! And they are all moving at once in a blur of patterns and colors.

You stay up all night, sleep the next day, then do it all over again.

This giant leopard moth is warming up its wings for takeoff.

Adelowalkeria moths are furry and sit on your finger like tiny teddy bears.

This harlequin beetle was too big to fit on my hand.

After three weeks in Paradise, I returned to Boston laden with gigabytes of photos, which I slowly identified over the course of a year. REGUA has started a moth database to be used by entomologists around the world. There’s a lot more out there, but it’s a start.

With the help of MISTI, I flew back this year during IAP. January is the wet season in Brazil, and it rains a lot. Next to every building is a deep groove in the concrete caused by water falling off the roof. Moths like to go out in the heaviest downpours. I don’t. But anything in the interests of science, right?

Together with Sue Loose, a dragonfly expert, I spent a week in the mountains, where the most exotic moths are to be found. On New Year’s Eve, we visited a peak called Caledonia, about 6,500 feet high. That’s taller than any mountain in the eastern US, but at the Equator it could still be warm and vibrant with life.

Even in the rainforest, of course, you don’t get to spend all your time watching fireworks from a mountain. There are afternoons lugging heavy equipment along a trail. Hours on a patchy wifi network, pleading with Google to tell you what your species is. You learn to deal with unforeseen calamities, the vicissitudes of an environment where you really aren’t in control.

Confusion – when you discover a bat in your bathroom.

Frustration – when a gigantic yellow moth appears and is eaten by owls before you can get a photo of it.

Despair – when you drop your special moth light and it shatters into tiny pieces.

Pain – when you discover you are standing in a swarm of army ants.

Panic – when you have set up camp outside a school in a remote valley and manage to set off the burglar alarm in the middle of the night. Will you be able to convince the police that you were just looking for moths?

But if I’ve learned one lesson, it’s this: If you truly care about something and persist in working towards it, sometimes it magically happens. Remember your dreams, because they may not be as far off as you think. 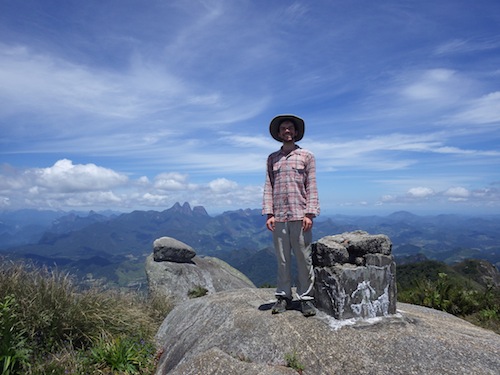