From college essays to a Medieval Studies @ MIT Colloquium

In 10th grade, I read a book by the biologist Edward O. Wilson and became obsessed with the word consilience. I loved all of my classes – Shakespeare, Western Civilizations, chemistry, Pre-Calc/Calc, band, and so on – and was enamored by the possibility of doing research that bridged multiple disciplines.  I talked about consilience on my college applications, in my graduation speech, with strangers I met at conferences. After I got to MIT, however, consilience took a spot on my mental shelf, where it’s been collecting dust.

On Monday, at the beginning of my Chaucer class, Professor Bahr passed out a poster advertising that month’s “Ancient Medieval Studies @ MIT Colloquium” talk: 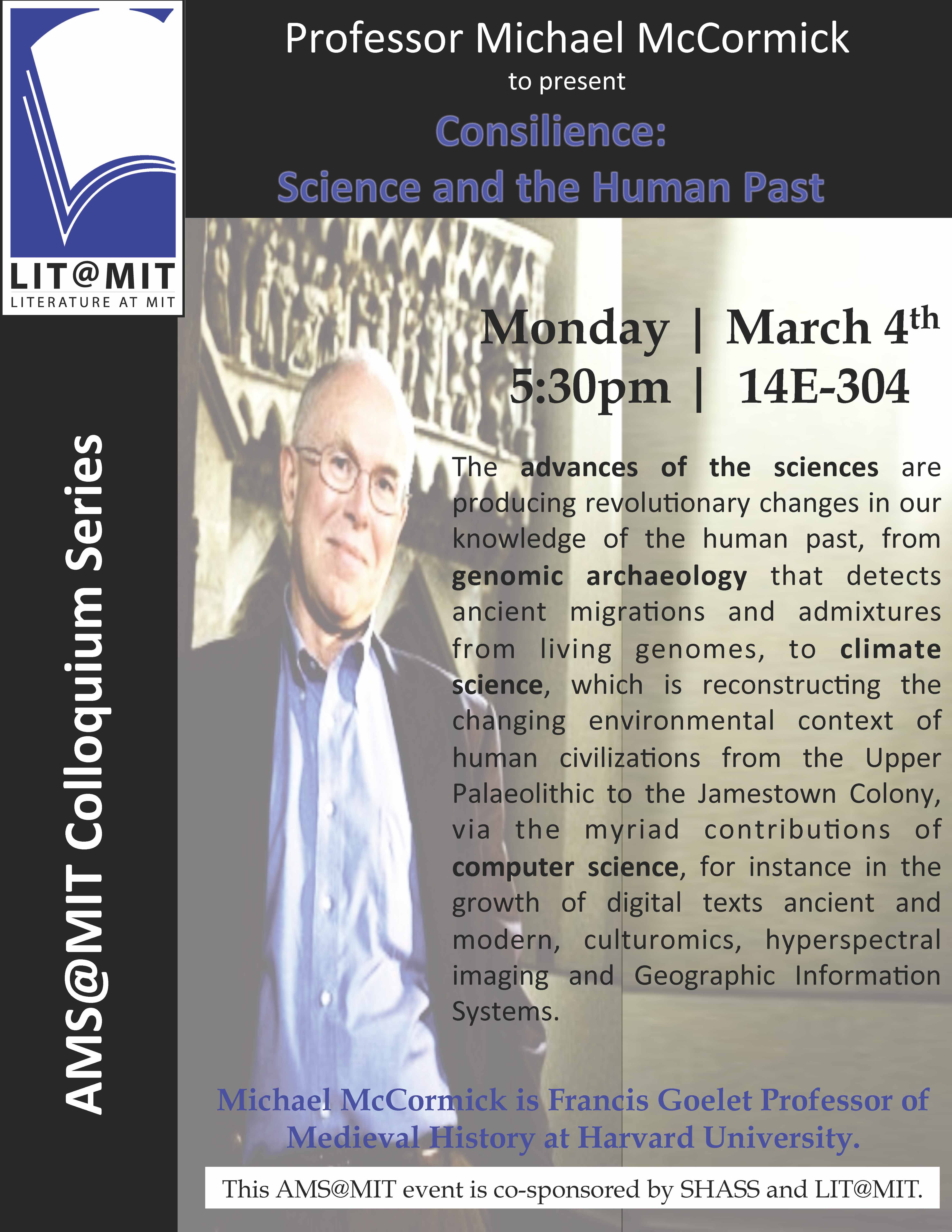 I didn’t have the faintest clue what “genomic archaeology” or “hyperspectral imaging” was, but I sure as anything knew what consilience was. I FREAKED and started babbling about E. O. Wilson; Prof. Bahr reminded me that we were in the middle of our Middle English quiz.

At 5:30pm, I followed Professor Bahr down to 14E-304: a cozy little seminar room with a central table and couches against the walls. Two tables proffered wine and scallop-wrapped dates, while various professors trickled in; I recognized a Medievalist, a Shakespeare specialist, a Milton expert, and a scholar of ancient Greece and Rome. I sat at the central table, feeling a little out of place.

Michael McCormick came in a few minutes later, with the same face as his picture, but wearing a fancier suit.

He studies, he began, the end of the ancient world and the beginning of the Middle Ages. More specifically, he is currently interested in the intersections of science and history – where the two fields can come together to construct human history. Even more specifically, he shouted “I think we should collaborate the bejeezus out of them!” and banged his fist against the table.

“By doing history with science, and science with history,” he continued, we can learn about “the voiceless people”: the ones “without the ability to wield a pen.” Ancient history is, after all, full of people who could not write; we can’t read their diaries to find out about their day-to-day lives.

He talked about a colleague in London who studied the Y chromosomes of ancient Britains to infer that there was preferential mating with conquerers, that dramatically altered the genetic makeup of the population in a short period of time.

He also talked about the sequence of colonization in prehistoric Polynesia. The movements of ancient Polynesians have been reconstructed through phylogenetic analysis of the modern descendants of the rats that they ate. Similarly, migration between the British Isles and Norway have be mapped out by studying genetic groups of mice in the UK, that are also found “not just in Norway…but in NORTHWESTERN Norway!!!”. I clearly missed something, because everyone else in the room went “mmmm!” very sagely, to which Prof. McCormick replied “HMMM!” emphatically, beaming.

The same migration pattern can be traced by studying a genetic condition found among children in Ireland, and children in NW Norway.

Essentially: one can construct human history from modern scientific evidence, as well as by studying historical manuscripts. “When independent methods converge [on one answer]”, Professor McCormick said, “that is what my friend Ed calls consilience.”

An example of two methods converging: in Viking cemetaries, women can be found buried with chopped-up pieces of Irish manuscripts, because their Viking husbands (to impress them – the male:female ratio in Viking land was very high) went to Ireland and, in Prof. McCormick’s expert lingo, “got lots of bling.” These movements to Ireland have since been supported by mitochondrial DNA analysis. “Ancient DNA evidence, modern genome results!” Prof. McCormick exclaimed. “Consilience!”

A few years ago, 34-38 skeletons were found in the grounds of St. John’s College, Oxford. They were carbon-dated to around 600 AD. A year later, “they found evidence of another unhappy incident”: another pile of skeletons, at another site (didn’t catch where). The guy next to me jutted in to ask how many corpses there were, exactly, and the speaker replied “eh, over 50.”

To figure out who these people were, scientists studied the enamel of their teeth. This is the hardest substance in the body, and survives long after everything else. The enamel told historians and scientists that these guys were living in the Arctic: they drank cold water. Historians speculate that the skeletons are remnants of the St. Brice’s Day massacre, when the king ordered the slaughter of all the Vikings living in the UK at the time.

While describing a current project on the bubonic plague, Prof. McCormick referred to a student who he thinks is “the first post-doc in archeogeochemistry” – at “archeogeochemistry”, the professor to my left spit out his wine and had to grab a napkin to wipe his mouth. McCormick snatched my attention back when he shrieked “and GEE, WHIZ! WE FOUND SOMETHING CRAZY!”

The crazy thing: these skeletons got a lot of marine food. But they lived far from the sea. This led historians to speculate that someone had figured out how to pickle herring! “In fact,” McCormick continued, “I looked in the archives of the merchant Francesco Datini, which date to 1335-1410 AD” and found that yes, these people had found a way to preserve herring. “This child,” McCormick said, gesturing at one of the mass of skeletons on the slide, “this man, this woman, were getting herring.” Consilience! An isotopic record, archives of a merchant.

The history of human health and disease is, in McCormick’s words, “a fundamental aspect of human history” – another interesting area of consilience is environmental history and climate science. Scientist-historians have studied the ancient air trapped in glaciers to date all the major volcanic eruptions during the Roman period. McCormick’s research group has also been able to reconstruct patterns of precipitation over a span of two thousand years: through 2000 AD. He was then able to confirm 30/34 of the climate extremes they predicted, by searching through the writing of 104 Medieval historical witnesses, between 1013 and 1504. “Modern historians can really contribute to our colleagues in the sciences,” he said proudly.

Another project: scientists who are experts in analyzing tree rings (tree rings. seriously.) have created the first-ever reconstruction of Roman climate. Now, the first-ever ice core expedition aimed explicitly at reconstructing the environmental history of Europe since the Roman Empire is underway. “We are doing history with science and science with history,” McCormick said.

During the Q&A, McCormick’s spent about five minutes telling the story of how Thomas Aquinas (who was subsequently sainted) died after eating a herring. The guy to my right mentioned that he has “some Dutch colleagues that are convinced that herring is the cause of the Dutch Golden Age,” and McCormick got very excited: “yes, yes, absolutely!” It’s also worth mentioning that, during his talk, McCormick periodically threw out phrases in Latin or German, and probably also in languages that I couldn’t identify.

When the talk was over, it was already past 7, so I booked it out of the room. After writing the majority of this post, I walked upstairs, where I knew that Bahr’s CS Lewis/Tolkien class was just coming to an end. Three of my friends are in it, so when they came out, I accosted them, and didn’t stop talking about consilience until we had walked all the way home.