Today, I walked into my office (cup of iced tea in hand), logged onto my computer, took one look at my Desktop background, and screamed “WHAT IN THE HELL?” 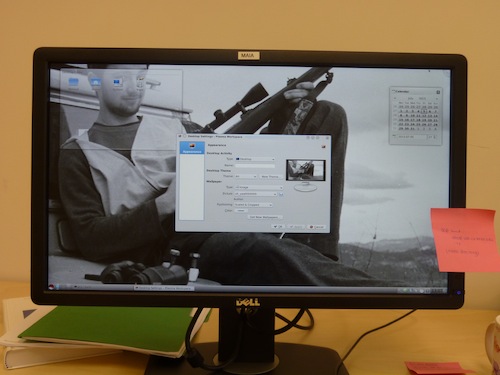 Giggles floated across the hall from the other summer student office. About half an hour later, I found more pictures of Raphael: under my keyboard, behind my monitor, on the side of my computer. Raphael, who’s in that other office, found a surprising picture of me under his keyboard as well.

Jenn, the perpetrator, tells us that there are a lot more that we haven’t found yet.

This is Revenge for yesterday. There was a July 4 party at my house, and all the other summer students came over. The guest bedroom has a huge pile of cardboard boxes, and Raphael hid in the biggest one, on top of the bed. Heroically maintaining a straight face, I asked Jenn to go inside and get the sheet off the bed so that I could put it in the washing machine. When she tried to push the box out of the way, Raphael stuck his hand out and made a noise somewhere between an angry cat and a snake, and Jenn ran off screaming into the hallway. When she got her breath back, she vowed revenge.

The company is one of the big plusses of a summer research program. On-campus research opportunities abound, but the company is largely the same company that I have during the school year. Here at the NRAO in Charlottesville, my coworkers are other astronomy/physics undergrads from all over the country. They go to school in Michigan, California, DC, down the street at Harvard; one drove the 2548 miles from Montana with an axe in the back seat, no GPS, a tent, two sleeping bags, and everything else one could possibly imagine needing to survive in the wilderness. During the school year, they fence, run track, run student organizations, sing a cappella, go camping, complete triathlons, swim, play basketball. Here in Charlottesville, we study deuteroammonia and formaldehyde in molecular clouds, Saturn’s moons, pulsars (YAY!), star formation tracers in the antennae galaxy, and more (it’s hard to keep track of what everyone is doing.)

We spend most of the day sitting in front of our computers, but spice things up with (Scented) Candle Hour, coffee/tea breaks, snacktime, yoga, impromptu Epic Music sessions, and general merriment and shenanigans.

We share a burning passionate love of Carl Sagan, which manifested itself in a Cosmos marathon and sleepover. When choosing a location, we considered a weighted sum of Size Of TV and Number Of Couches, and the NRAO headquarters (our office building) won by a long shot. So, yes – we slept at work. A janitor judged us really hard when he saw us in our sleeping bags in the NRAO library.

I tried to hug Carl Sagan, but ended up awkwardly covering his mouth.. 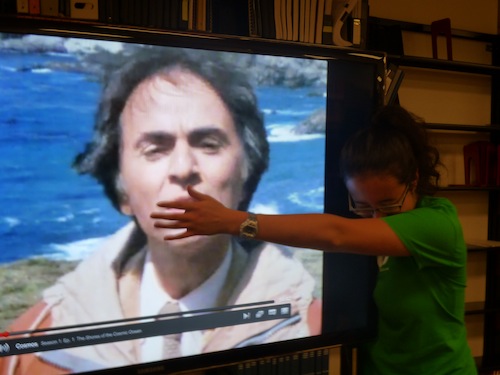 The next morning, we piled into cars for a field trip to Green Bank, West Virginia: site of the world’s largest (and sexiest, to use the technical term) steerable land object. 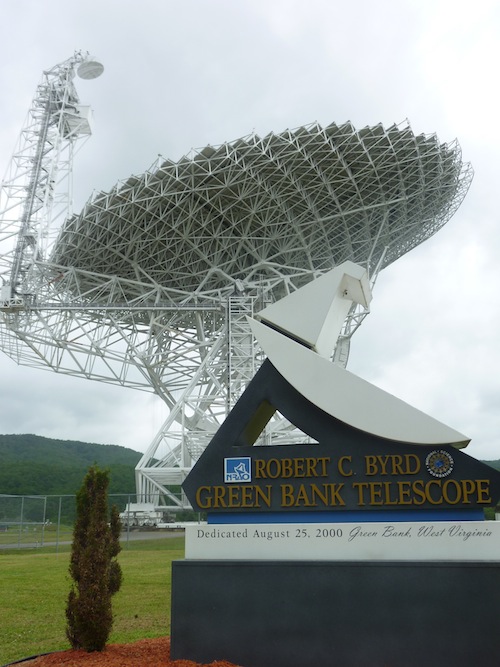 The GBT is 500 feet high, and its dish is over 300 feet across. Radio waves from space bounce off the surface, and the feedhorn at the top funnels them down to the appropriate receivers. My pulsar data is collected by the GBT, so it took all my self-control not to fling myself onto the L-band feedhorn. Oh, wait. 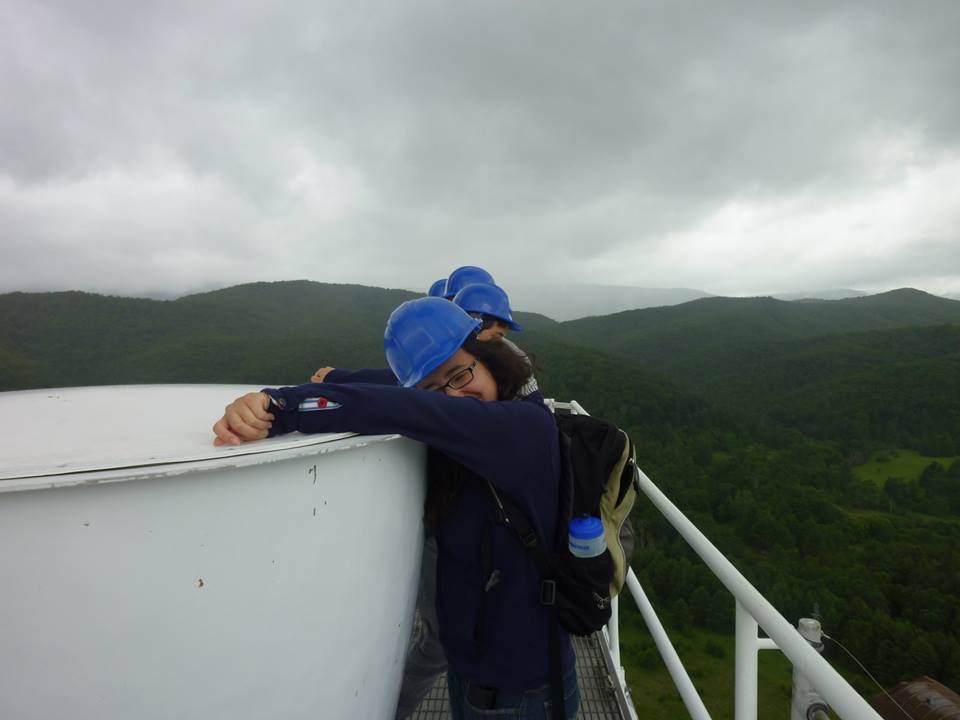 It is a beautiful thing to touch the structure that collects your data. We weren’t allowed to walk on the dish, unfortunately, but we WERE allowed to crouch down and touch it with our fingers. 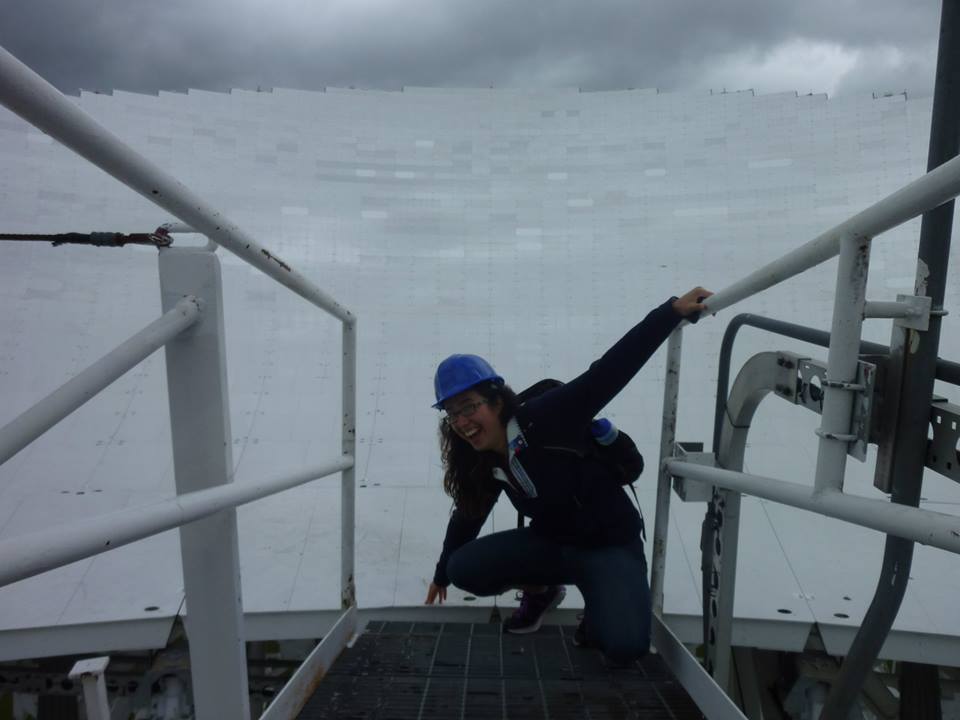 We also got to wear sweet construction hats, which was definitely one of the trip highlights.

Tomorrow, we’re going on an adventure. At the crack of dawn, we’ll embark on a scenic drive through Shenandoah National Park, hike up to a summit, camp overnight, drive to Harrisonburg and eat Ethiopian food, drive to America’s Oldest Show Cave and climb around, then head back to Charlottesville, assuming none of us have been eaten by black bears. If that happens, then: it’s been real, everyone.

Next week, we’ll all get on a plane and fly to New Mexico, where we’ll reduce some EVLA and VLBA data of pulsar winds and star-forming regions.

It’s hectic and a little chaotic and sometimes frustrating to make plans with 15 people involved, but always always fun, because everyone here has a seemingly-inexhaustible sense of humor and energy supply. Also, we’re astronomers, so conversation never dies because there’s always space to talk about.

Right now, Adrian in the corner is talking with his mentor. Nick has some very colorful Amp vs. UVDist plots on his screen. Raphael is rolling around in his chair, and Jenn fiddling with a highlighter. The problem with good company is that it’s a little bit distracting…

I really need to get back to work.