CP* restored my faith in the universe by Ankita D. '23

CP*,⁠01 called as such because it's no longer a weekend--it's over multiple weekends the virtual replacement for Campus Preview Weekend, was SO much fun. Sure, there’s no free food involved when you’re clicking between Zoom meetings, but students are able to bring the same energy to virtual events as they are to live ones! I’m writing this after finishing my third and final CP* event, which was some of the most fun I’ve had in literal weeks.

I’m so grateful that I’ve had these chances to meet the Class of ’24—they’re wonderful and hilarious and !!!! I love talking to everyone and sharing in their enthusiasm so! much!

These couple of days have been a testament to how amazing the MIT community is. So many people were involved in this initiative: those who organized and hosted events, coded things for the massive Discord server, facilitated all the prefrosh joining and being able to reach out to students, and even more. The fact that all of these individuals helped replicate the experience of CPW virtually and under time constraints is so impressive to me. I’m so thankful to be a member of this community :)

As I mentioned earlier, I hosted three events. The first was a Q&A(nkita) on Wednesday that garnered 60-70 viewers (probably since it was one of the only events that evening). I talked pretty much the entire time, speeding rapid-fire from question to question, so it was pretty stressful. I really enjoyed giving everyone advice, though—seeing people ask the questions I had as a prefrosh made me feel super nostalgic. Passing back knowledge to the yunglings is 10/10 would recommend

When there were no more questions, I just kind of memed with everyone for another hour or so. I feel like I’ve always been “the young one” in most environments I’ve been; I took a lot of classes with upperclassmen in high school, and hung out with people 10+ years older than me while studying abroad. In this situation, though, I’m the boomer…wild. I really enjoyed how everyone roasted me for not being able to do crunches⁠02 in online gym one time, i was bullshitting an exercise sheet and wrote that my heart rate went from 60 to 144 after doing TWO crunches. or figuring out how Zoom works.

My next event, which was held on Friday, was a part of the general Admissions Bloggers one. Normally, we all gather in the Coffeehouse Lounge and talk around small tables, so prefrosh get to interact with us in small groups. To cultivate this experience through Zoom, the bloggers each hosted a room with a different activity. My room was called “one-line fanfiction/anime music quiz” and essentially attracted all the chaotic weebs. It was glorious.

For one-line fanfiction, we each contributed a single line at a time to a story. It started out with “Levi was a simp” (contributed by me) and ended somewhere in Jojo’s Bizarre Adventure hell. One particular line in the middle, that perhaps would be better not included in this post, had me absolutely DEAD. prefrosh are so funny lmfaoaoaoaoaooo

We then played Anime Music Quiz, an incredible game where you guess what anime the opening/ending is from. I thankfully wasn’t dethroned as the Weeb Queen :’)

Right after this was the event I’ve been anticipating for weeks: a dramatic reading of a [censored] version of My Immortal, the most iconic fanfiction of all time. This fanfic is so ingrained in the Gen Z consciousness that its legacy lives on; one might even say it’s, uh, immortal…

For those curious, here’s my event description:

come rediscover your fanfiction glory days through a dramatic reading of “My Immortal.” and maybe help create your own fanfic as well…?

a btb “what better way to validate your acceptance to tech school than to read and write bad fanfiction” comm.prod

Anyway, my roommate and I hand-censored the fanfic so that it would be at least a semblance of appropriate, and I screen-shared it via Zoom call to an audience of around 40 people. The experience was as incredible as I’d hoped; people went OFF. There were accents, accurate readings of all the misspelled words, and constant comments in the chat from viewers. Popcorn reading worked surprisingly well over Zoom, so passing the baton from person to person went smoothly. And I was laughing my ass off the ENTIRE time. 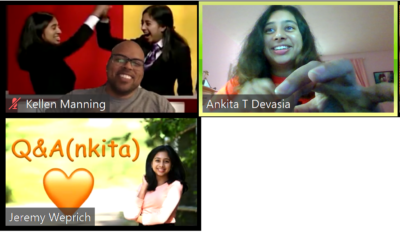 Dramatically reading My Immortal has been a CPW/REX event for my floor for the past several years, so I’m happy that I was able to, uh, share a bit of my culture?? with the prefrosh. I also was pumped to see a lot of people from my floor pulling up to the event in our bright orange shirts; I’m glad that we’re able to support each other even virtually.

After finishing a good 11 chapters of My Immortal, we moved to the “Yale Chad” play, which I didn’t know was a thing (wow I really am a boomer). Reading it felt like a fever dream…we also briefly perused the Kruschev/Stalin version of My Immortal, which I also did not know existed.

I’m really glad this event was a success—I was worried about people not engaging due to the virtual platform. Everyone seemed to have a great time, though! And my MITPAL prefrosh said it was the best event so far *_* my heart is so full!!!

Prefrosh, thanks for coming through <3rd

On Saturday, I attended two of my floor’s events: No More Table and Strange Meats. The premise of the first one was literally just “mom said we have to get rid of a table” and, as you might expect from that, it was absolute chaos. I’m not quite sure what happened, but I vaguely remember someone strapping a half-eaten cheeseburger to the titular table, which was an ironing table since Target had No More Table, painting Yale Chad on it, and wheeling it down the street on a skateboard. A lot of prefrosh stayed for the entire event, even when we realized we had the wrong Zoom event link and had to change rooms, which is…quite something.

Although the majority of events were concentrated between April 16th and April 18th, CP* is definitely not over! Events are happening for pretty much the whole month, and students will continue to be present in the Discord to help out prefrosh.

I feel really blessed to have been a part of CP*. I hope the Class of ’24 has been able to get a taste of what the CPW experience is and that they’re making the most of this opportunity! After all, it’s a great one.