A rough morning, a long nap, and a kindly neighbor

January 10
On the plane from Panama to Quito

What a goofy immigration card. 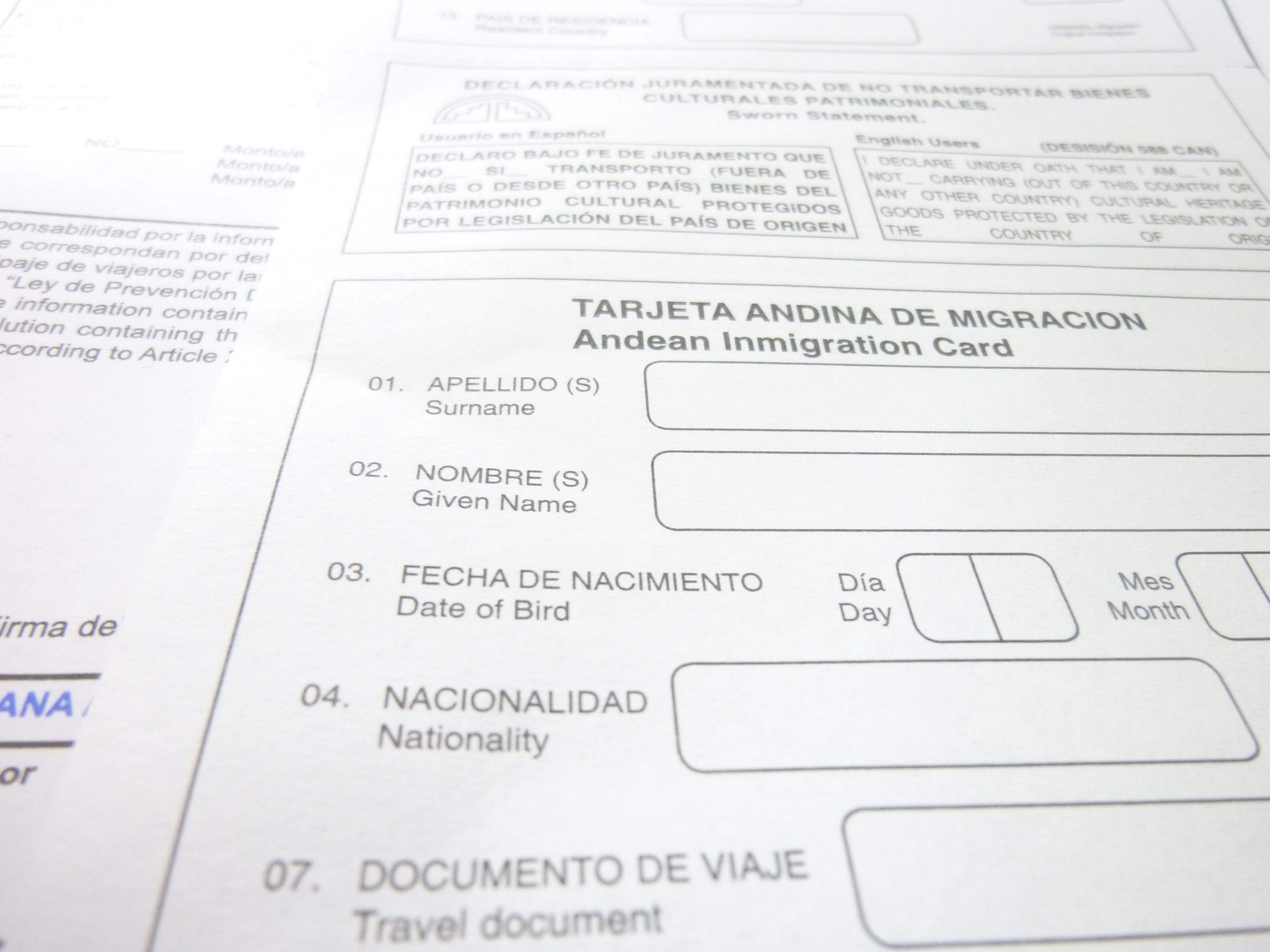 I don’t think I know my Date of Bird?

My alarm went off at 4am. I submitted my very last application at 2am, couldn’t fall asleep until 3am (you know that post-essay adrenaline rush?) and couldn’t drag my body out of bed until 4:40. I discovered that the clothes I left out to dry were still SOAKED, and applied the hairdryer treatment with minimal success. Oh well…hopefully there’s no mold when I open my suitcase in February.

Raphael very kindly woke up extra early to help me pack, since I told him that I would be up late. We staggered around packing my things for an hour. I eventually had to give up on ever fitting my laptop into my suitcase; hopefully Eric can fit it into his backpack.

At 6 or so, we went to the lobby to check out and get a cab to the airport. I was very grumpy, and my grumpiness was exacerbated by the very slow pace at which the rest of the world was moving. After listening to a very involved discussion about perks of hotel membership, we finally stored my bags and took a very sketchy cab ride* to the airport. I made a quick trip to Eric’s room to slide the luggage tags under his door. I hope I see my laptop again…

*Well, Raphael says it was sketchy. I was fast asleep and didn’t notice that the driver was tailing other cars in icy slippery conditions.

My morning became even less cheerful when we learned that a taxi to the airport costs $70. Fortunately the NRAO and MIT are covering travel expenses!

Dunkin Donuts bagels then a 5-ish hour flight to Panama. I remember pretty much none of it (including take-off) except for the delicious ravioli (I woke up in time for lunch :)). Raphael woke me up when we were landing, so that I wouldn’t miss the beautiful view.

Panama Airport: humid, crowded, modern, indistinguishable from any other big transfer airport. After some discussion with French and American travelers about whether the water from the water fountain was safe to drink, we opted to buy a bottle of water, which somehow cost $4. A Dunkin Donuts bagel cost $8. Ugh. NOT a fan of Panama Airport.

Now, we’re sitting on the plane from Panama to Quito. Our neighbor here in Row 7 is named Isabel. She lives in Chicago and is visiting her home in Ecuador for the first time in 2 years. She hasn’t told her family that she’s coming, and is excited to surprise them. We introduced ourselves and she looked delighted: apparently her dad is named Rafael and her mom is named Ana! “Maybe when you have a kid,” she said, “you will name her Isabel!!!!” We laughed politely.

Our names seemed to particularly endear us to her. She wrote down suggestions for how to get to our hostel from the airport (take the trolé) as well as for how to deal with taxi drivers trying to rip you off. She invited us to visit her house in the ecological reserve, a 4-hour trip from Quito. She wrote down her phone number and offered to show us around, and said we could call her if anything came up. What a kind person! Definitely intending to take her up on that.

Woah, we just broke through the clouds. GREEN! Lots of green. Mountains, denser houses than I had imagined. Lots of farmland at the foot of the mountain’s peak. 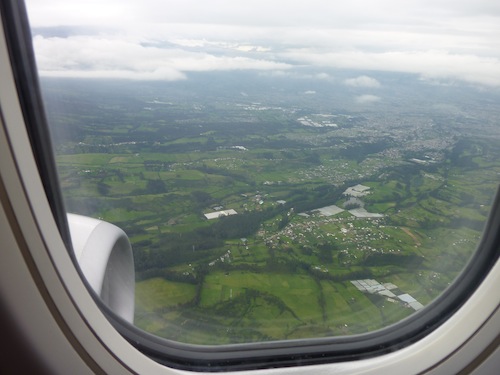 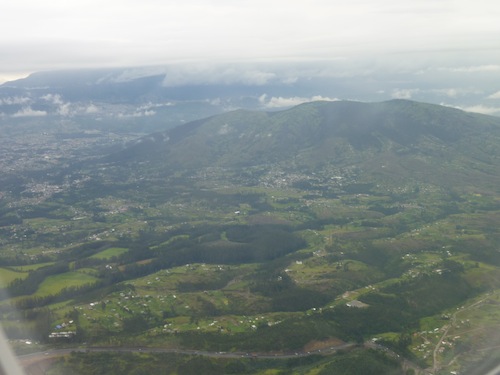