everything in this section is only approximately correct. basketball is a complicated sport and there are many exceptions to every principle

i’ve been watching basketball on-and-off for a while now and my favorite part of the game is seeing very effective defense. there are way too many kinds of defense for me to be able to cover them all in this post, so i won’t try to. instead i’ll just say that the most common kind of defense is man-to-man defense, where each player on the defending team matches up with a person on the offensive team and is responsible for guarding them and following them around the court. like this:

there are some basic principles at work here:

the natural consequence of these principles is that, most of the time, defenses resemble the above picture: five defenders spread around the court, each one standing in a way that prevents direct runs to the basket. this is the standard setup and is not particularly notable; more interesting to me are the scenarios where the defense has broken down and the offense has an advantage, and the defense must then move efficiently to recover from the breakdown

depending on the situation, defenses may be able to recover through good systems or good individual play. here is an example of a good system:

the offensive team has created a slight advantage where one of their players is open. however, as soon as the offense passes the ball to the open player, two players on defense immediately rush towards them to prevent that player from scoring. the double-team creates an opening elsewhere in the offense, so the offense passes to the newly-open player, and then the process repeats several more times until the time on the possession has almost run out. this level of defensive coordination is extremely rare since it requires all five defenders to be extremely engaged and responsive to the offense; most teams either have players that don’t care enough about defense to pull this off or have coaches that don’t prioritize defense enough to practice schemes like these. but when plays like this one do happen, i think they are extremely beautiful to watch

as for solo defensive plays, there are many varieties of good individual defense. my favorite one is when one player is successfully able to defend against multiple players at once. one notable instance occurred in last year’s nba finals:

the narration in the video does a pretty good job of covering the play itself, though there are a few other things which i think are worth pointing out:

for a similar example, here’s an instance where one defender defends against three players at once:

in this play, it might look like the defender is just standing under the basket and not doing anything while the three offensive players pass the ball around and lose it. in reality, the defender steps forward slightly to challenge the player with the ball and prevent that player from scoring immediately, resulting in a pass. however, while stepping forward the defender has also taken care to stay in a good position to be able to guard the other two offensive players if necessary, so after the pass the defender is immediately able to recover to the player the ball was passed to. once again, this only works because of very accurate defensive positioning, and eventually the offense makes a careless pass and the defender is able to intercept it

one of the things i find most interesting about defense in games is its relationship with responsibility. i am of the belief that, while you may not be responsible for the existence of problems in your life, you are responsible for trying your best to solve them. some of my friends have very different opinions on this subject, and this diversity in views is also apparent in differences in how various games treat defensive responsibility

on one end of the spectrum are games like football (soccer), where there are situations the defense genuinely cannot defend and therefore is not responsible for. for example, consider the penalty kick: 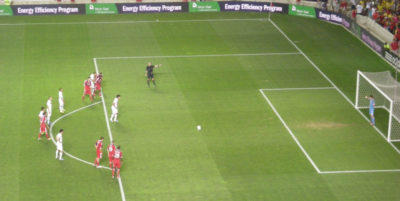 even with optimal defense from the goalkeeper, penalty kicks usually result in the offense scoring (around 75% of the time in professional football). the reason is that the kick is too fast for the goalkeeper to react effectively to, and the goal is far too wide for the goalkeeper to cover. therefore, the kicker can aim at the far left side or far right side of the goal, and the goalkeeper doesn’t have a better strategy than guessing which side the kicker will aim for and diving to block that side of the goal. the existence of the penalty kick means that it is quite feasible for a football team to play perfect defense the entire game and still lose badly

(for a more extreme version of this idea, check out professional foosball, where every shot is essentially unblockable because the table is so small and the ball moves so quickly that you can’t see it)

on the other end of the spectrum are games like chess where, as far as we know, perfect defense should always result in a drawn game. of course the game of chess has not been solved yet, so it’s possible that there exist offensive strategies which force wins, but in practice the better two players are the more likely they are to draw. for instance, the draw rate in recent years among grandmasters with rating above 2750 has been over 70%, while the 2018 world chess championship famously resulted in all 12 games being drawn. so in chess we can reasonably say that the defense is responsible for every loss

i think basketball occupies a good middle ground within this spectrum. on individual plays, offenses may be able to score against perfect defenses – if a player throws the ball up and it happens to go into the basket then there’s not much anyone can do about that. however, if an offense is able to consistently score over the many possessions that make up a game or series, it is almost always because the defense is strategizing or executing incorrectly. in this way the defense is not responsible for the outcomes of any individual possession, but it is responsible for the longer-term trends that emerge in a game or series or season

one of the reasons i pay attention to good defense is that i view all day-to-day work as fundamentally defensive. here are some examples of what i mean:

i’m not trying to convince you that all work is defense; if it makes more sense for you to see your life as offense than defense then you should continue doing so. my point is simply that defense in basketball is one lens through which i view the world. when i see an exceptionally beautiful or difficult defensive play pulled off, part of me watches in awe at how skilled professional athletes are, and another part of me thinks that is the level of execution i aspire to reach in solving the problems in my life