From an antique bookstore to Drive-By Truckers, and back

One of my NRAO friends is a big fan of the band “Drive-By Truckers.” I had previously listened to a grand total of Zero alternative country music, so when they came to perform in Charlottesville last Sunday, I was happy to tag along. (It is very telling that when the crowd started chanting “DBT” I thought that they were chanting “GBT.”)

We had dinner with a few other friends, then walked downtown. On the way, we passed a quirky little hole-in-the-wall bookstore (in my friend’s words, “it has character.”) The lights were on, music was playing, and a ticket table was set up in the entrance. Curious, I stopped a guy from walking in, interrogated him, and learned that the bookstore was hosting a local play. The playwright turned out to be standing next to me, so we wished him luck and continued on our way. I mention all this because we met him again later – stay tuned.

The concert started at 8. We stood RIGHT at the front (well, second from front) which means that I

1) am now deaf,
2) am really mad because the woman standing right in front of me got to take home the guitarist’s pick, and
3) had an absolute blast.

All the hardcore DBT fans were right at the front with us (my friend could count himself among their ranks, since he knew every word to every song) — it’s always a privilege to be surrounded by the people who are the happiest to be there. Also, the lighting was pretty cool: 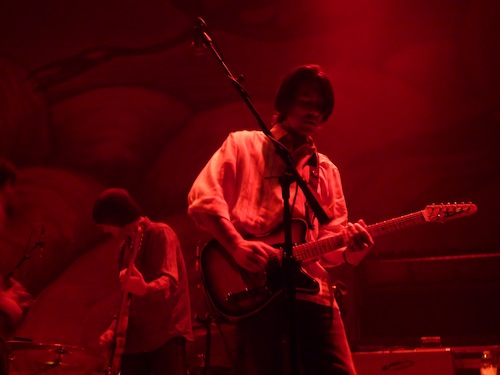 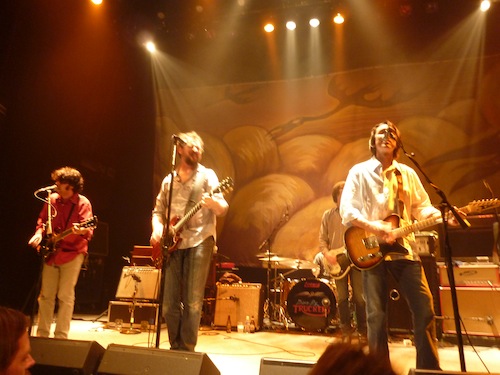 The concert ended at midnight. The trolley stopped running a long time before that, so we faced a half-hour walk home. To stave off the otherwise-inevitable heatstroke, we took a couple of minutes to dunk our heads into a fountain.

A couple of blocks down, we were back at the hole-in-the-wall bookstore; I recognized the playwright, who was piling boxes into the back of a truck. I asked him how it went. I’m not sure whether he was startled because I remembered him, or because I was soaked from the top of my head to the middle of my chest, but he said it went well and that he was happy with it. After a pause, he said “you know, if you want to check out a really eclectic collection of books, you should go into the store — it’s closing down.”

The walls were still lined with shelves, which were still lined with books. Posters lauded anarchy. There was a big flaking black-and-red mural of a Native American in full headdress. Pamphlets littered across tabletops warned against US government surveillance and drone attacks. The store was empty, except for the owner and his friend, who looked at us funny when we (still soaked) walked inside. I explained that we’d heard it was closing down, and were hoping to take a look. They store owner shrugged and said sure.

I ran my finger along the spines of the astrophysics section, while my friend wandered over to another corner. After I satisfied myself by reading a bit about inflation, I chatted with the store owner’s friend. He asked me what we did in Charlottesville, and I explained that we were doing astronomy research for the summer. His face lit up, in the way that anyone’s should when you mention astronomy.

“What stars are you looking at?” he asked. No stars, I replied: my friend is studying Saturn’s moons, and I’m studying the dead corpses of stars. Pulsars.

“Pulsars! Those are the disco balls in space.”

My turn to be totally astonished. I never meet anyone who knows what pulsars are. And “disco balls in space” is an awesome analogy. Hey everyone, my name is Anna. I’m a radio astronomer at the NRAO, and I study disco balls in space.

Turns out that this guy is very into physics and astronomy. He asked me all about how pulsars’ magnetic fields generate beams of light, so I taught him about spinning dipoles and synchrotron radiation and accelerating charges. He wanted to know about “virtual particles,” so I told him about vacuums and quantum fluctuations and particle-antiparticle annihilation. At one point, the store owner came back over, and gave his friend a weird look; my new friend replied to his stare with “hey man, you should be into this stuff – it has to do with Creationism!”

Eventually, it was time to go. We said goodbye to our new friends and the closing bookstore. We bought some sandwiches (we were unbearably hungry) and stumbled the rest of the way home. The next morning, I returned to my disco balls.