A tour of the Green Building roof with the MIT Radio Society!

Last week, I was lucky enough to get to see something very unique: the view from on top of Cambridge’s tallest building. The MIT Radio Society is raising awareness about the upcoming Green Building renovations, and they took me on a tour so that I could tell you about all the super-cool things they’re doing up there. 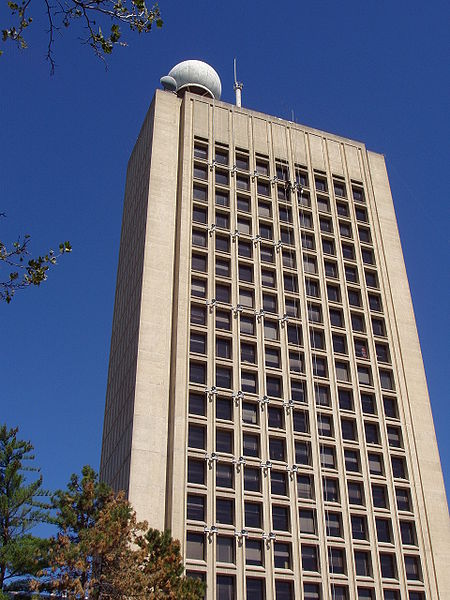 You probably recognize the Green Building’s weird silhouette, but maybe, like me, hadn’t thought about why it looks that way. The Radio Society taught me about the various antennae and took me inside the two radomes (yes, that giant sphere is a thing you can stand inside !!!). We also spent a good deal of time taking in the view of Boston and Cambridge from 21 floors up (we had to take TWO elevators).

The radomes (short for “radar dome”) are actually just fibreglass shells, built to keep out the wind and rain but be permeable to radio waves. They protect two big satellite dishes, which are used to communicate with people around the world as well as for radio astronomy. With the power turned off, these radomes are safe to enter to do maintenance… or just look around. (All the beautiful photos in the rest of this blog post are by Leif C. ’23.)

The fibreglass itself is in good condition, but the paint on top of it is old and peeling, which creates this beautiful mottled flamey look. On the roof itself, it’s often very windy, and that day it was about -8 degrees C. But inside the dome (once you’ve hauled yourself up the extremely cold metal ladder, anyway), it’s quiet and much warmer. Although much of the electrical equipment is very recent, the dishes themselves are older, and you can tell: they have history written right on them! Take a look at those dates, baby. 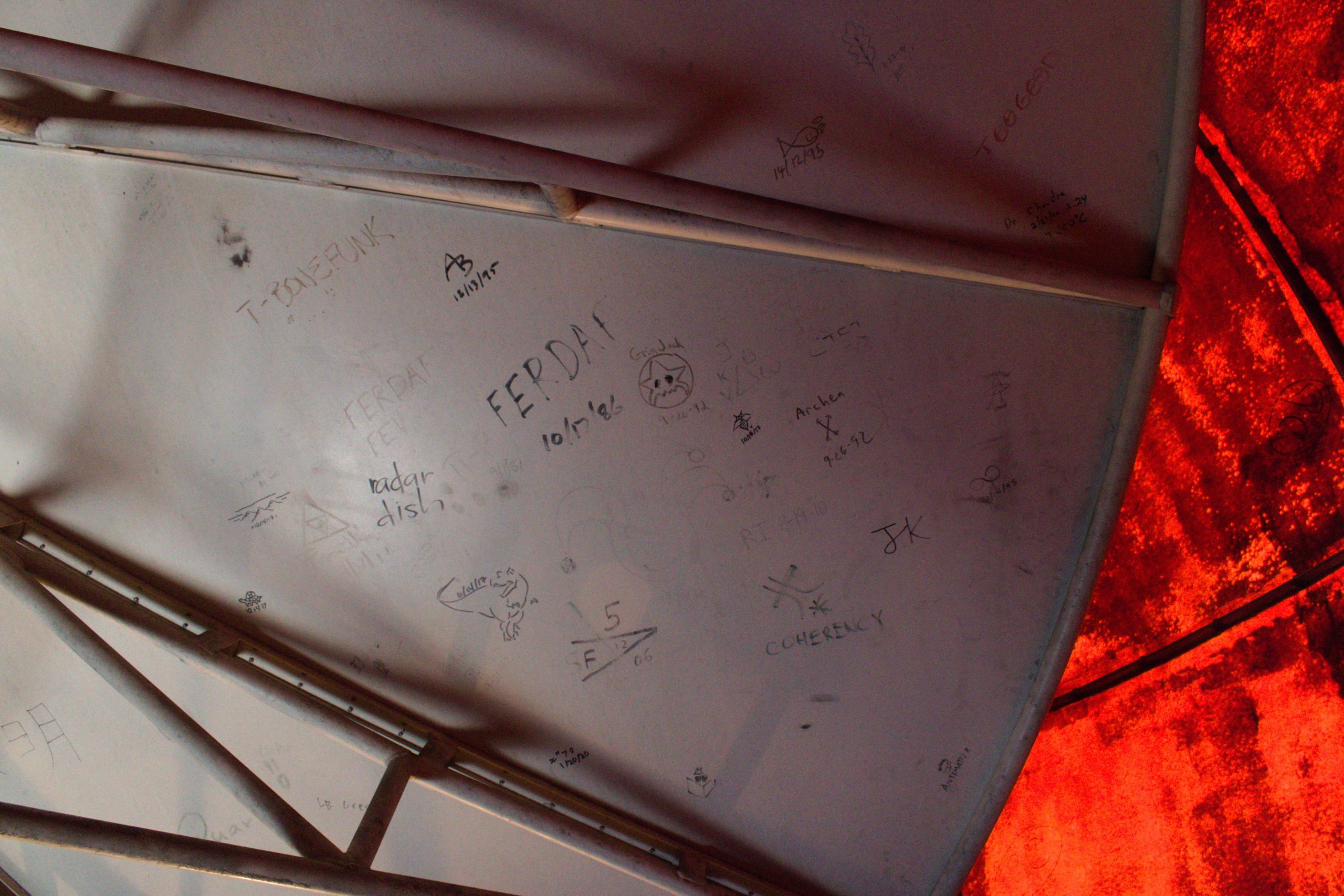 We spent some time in the domes, as well as inside the “shack” (the headquarters of the society), while I learned about all the projects going on on the roof. Here are just a few:

-A physics undergraduate recently used the big radome dish to map out the rotation of our galaxy by finding the Doppler shift in the frequencies of hydrogen emission spectra at various points, and using that to calculate the velocity of the matter (star, etc.) at those points.

-EME, or Earth-Moon-Earth communication. Bouncing radio signals off of the moon, rather than aiming them directly at the earth, allows the radio operator to talk to anyone anywhere on the planet. Past Radio Society connections have included Texas, California, Europe, and Australia. Recently, they communicated with the Arecibo Observatory in Puerto Rico after the earthquakes in the beginning of January, and received the news that the Observatory was a bit shaken up, but safe from the worst of the damage. (A system like this could be very useful in the case of a large-scale natural disaster in the US, when more commonly-used lines of communications like telephones might be out of service.)

-An APRS (automated packet reporting system) antenna. The APRS antenna works as a repeater: it collects packets of data being emitted nearby, like GPS signals from a computer, information from a weather station, or a packet from another repeater, and sends them out to further repeaters to help them reach their destination. For a long time, the Radio Society didn’t think that their APRS antenna was doing much — and then it went down, and they found out just how useful it was to everyone else. Today, they have a system set up to raise an alert after even just a few minutes of downtime, and the antenna handles thousands of packets per day, helping everyone in the Cambridge area get their data where it needs to be.

-An ADS-B (Automatic dependent surveillance – broadcast) receiver. ADS-B is the system that airplanes use to broadcast their position automatically. These broadcasts are very useful to other planes and to air traffic controllers, of course, but anyone else with a receiver can also pick them up. In the future, the Radio Society is hoping to develop a couple really interesting projects based around ADS-B. One is actually a machine learning program: can a computer be taught to predict the future location of an airplane based on past data? The other involves bouncing other radio signals off the airplane. This would require being able to accurately calculate the plane’s future location, but could greatly increase the range of the radio waves. 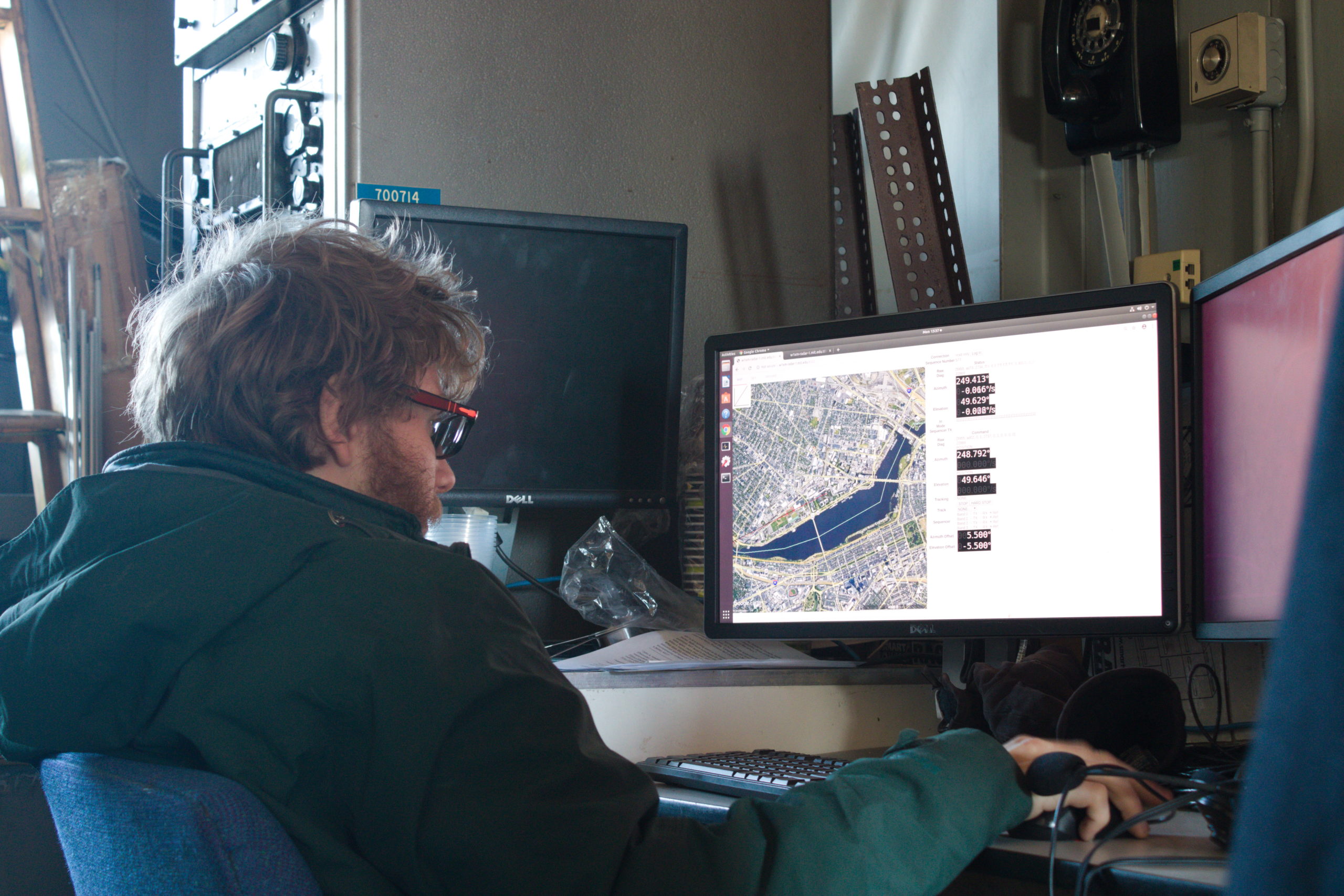 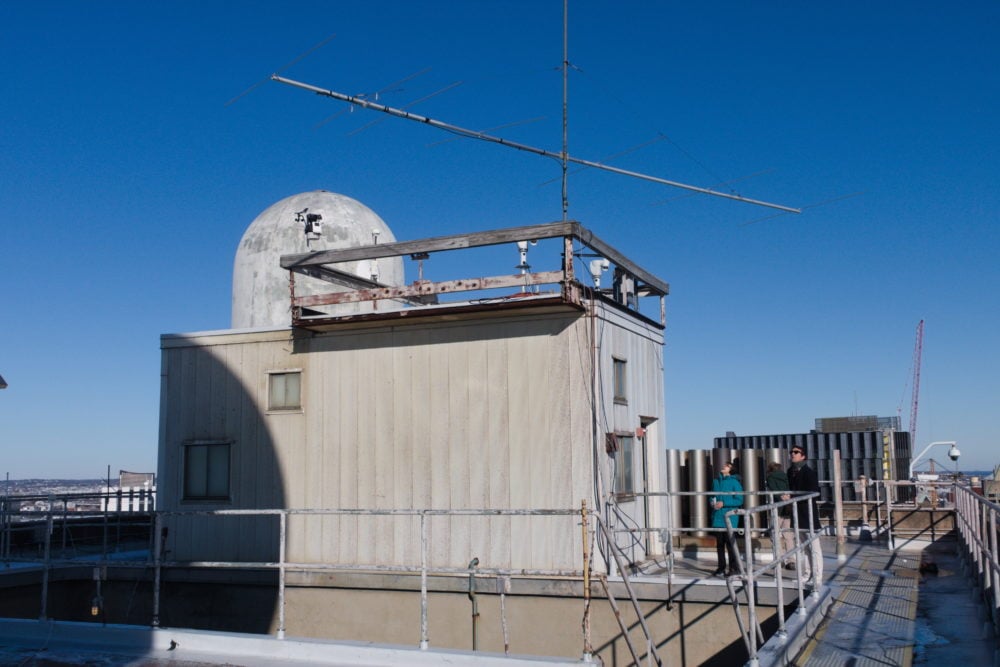 There are even more projects planned for the future, but things have been moving more slowly lately as club efforts focus on the renovations. The roof continues to be in use, though, as other groups, labs, and classes use it for research and learning. The Society’s ultimate dream would be to use these renovations as a chance to increase these other uses even more. The Green Building’s roof is one of the only rooftop radio/signal lab spaces on campus open to students — and it is the only handicap accessible rooftop lab space at MIT. It could be a fantastic space, open to all parts of the MIT community, where research of all types is done.

Of course, I went on this tour with the express purpose of writing about it on the blogs. But beyond the research being done here (which is very, very cool), I was struck by just how much this lab space, and the Radio Society, embody some of what is so special about MIT. We are a place where students teach other students; where you can learn skills you can’t learn anywhere else; where anyone is happy to teach you anything, if you only show up and ask. “Engineering for social good” and “learning by doing” have become buzzwords of late, but here at MIT they have always been in the water, powering so much of what we do.

The Radio Society is currently fundraising to support the continued existence of their antennae, the two radomes, and their “shack” headquarters. They are already partway to their goal of $300,000 to retain the shack. Unfortunately, administration has set much higher fundraising targets in order to keep the elevator to the roof (so that everyone can see the view I saw yesterday, no matter their level of mobility) and the equipment (needed for all these amazing research projects); the Society is still in talks with them to set the exact amount. If you’d like to make a donation to help them preserve this space, or want to get involved with their campaign, information on how to do so is available at their website: http://w1mx.mit.edu. And thanks for listening :) 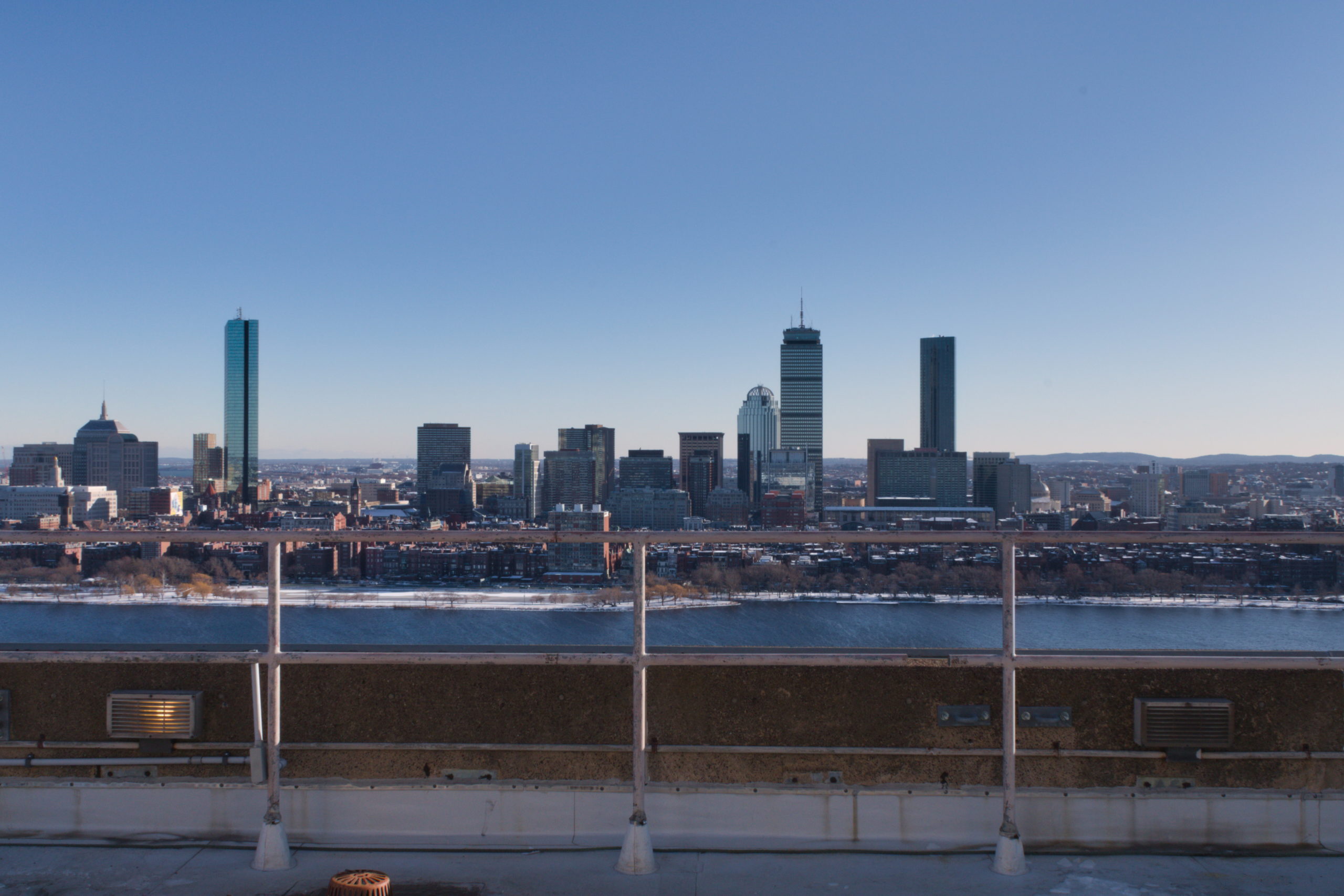 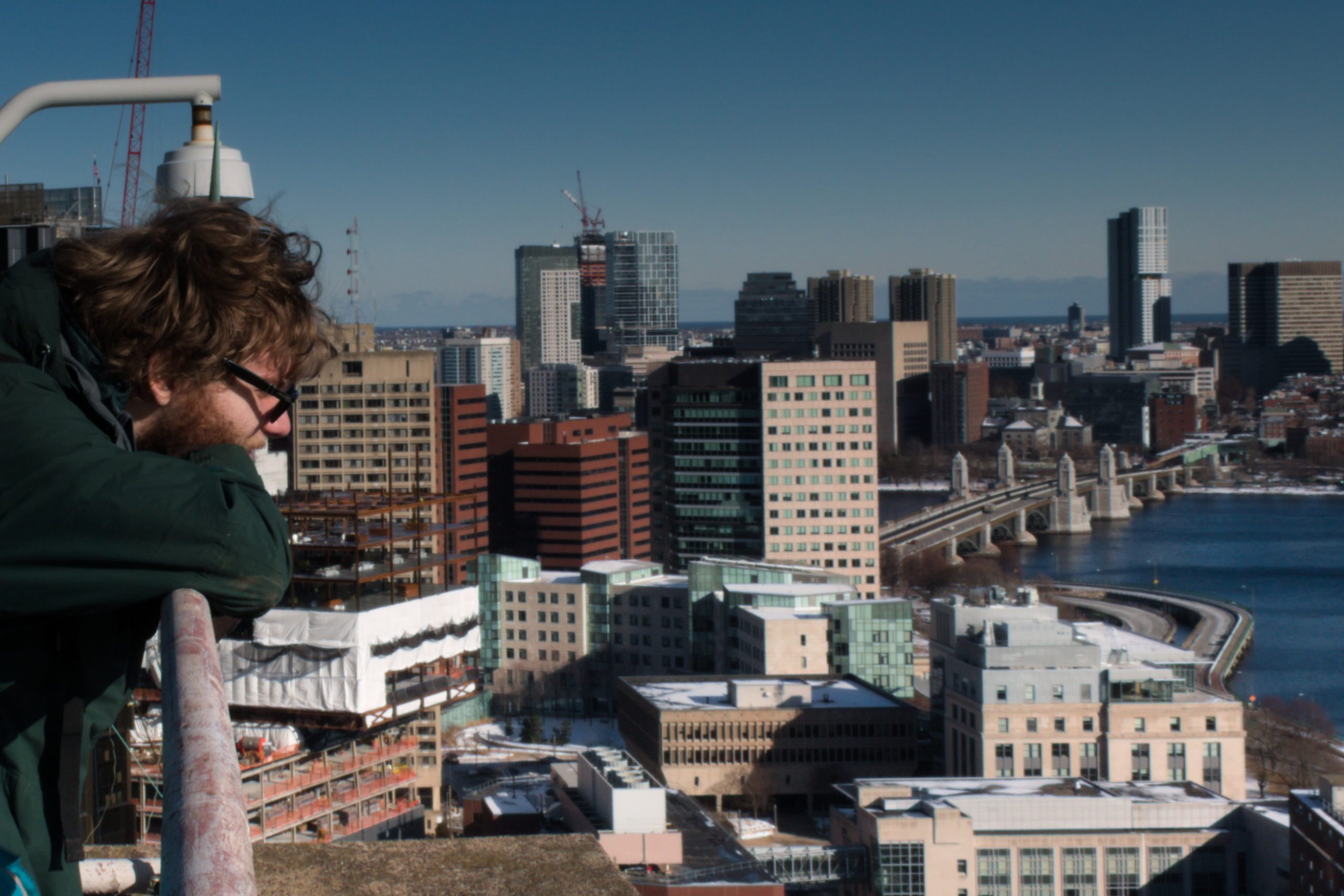 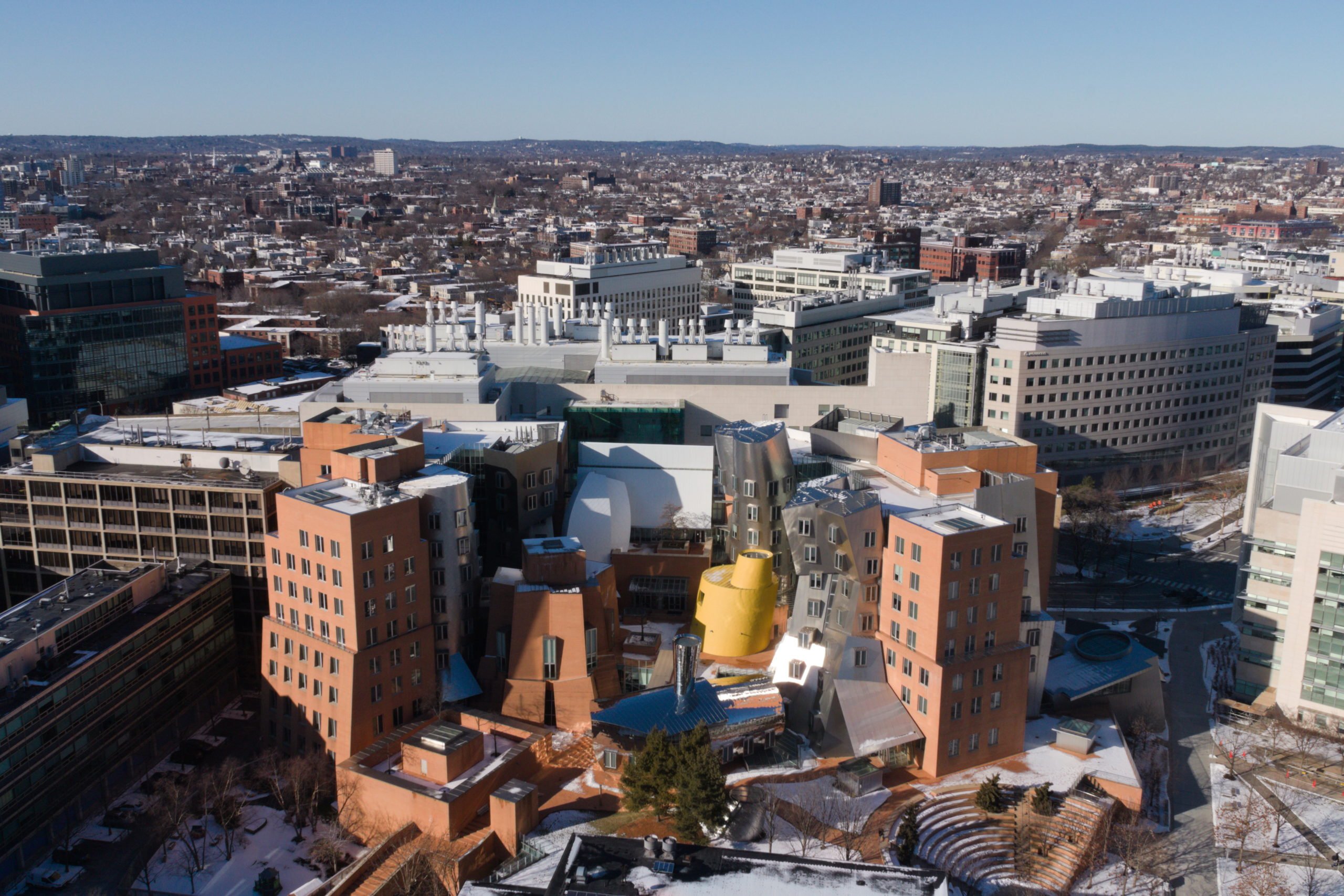 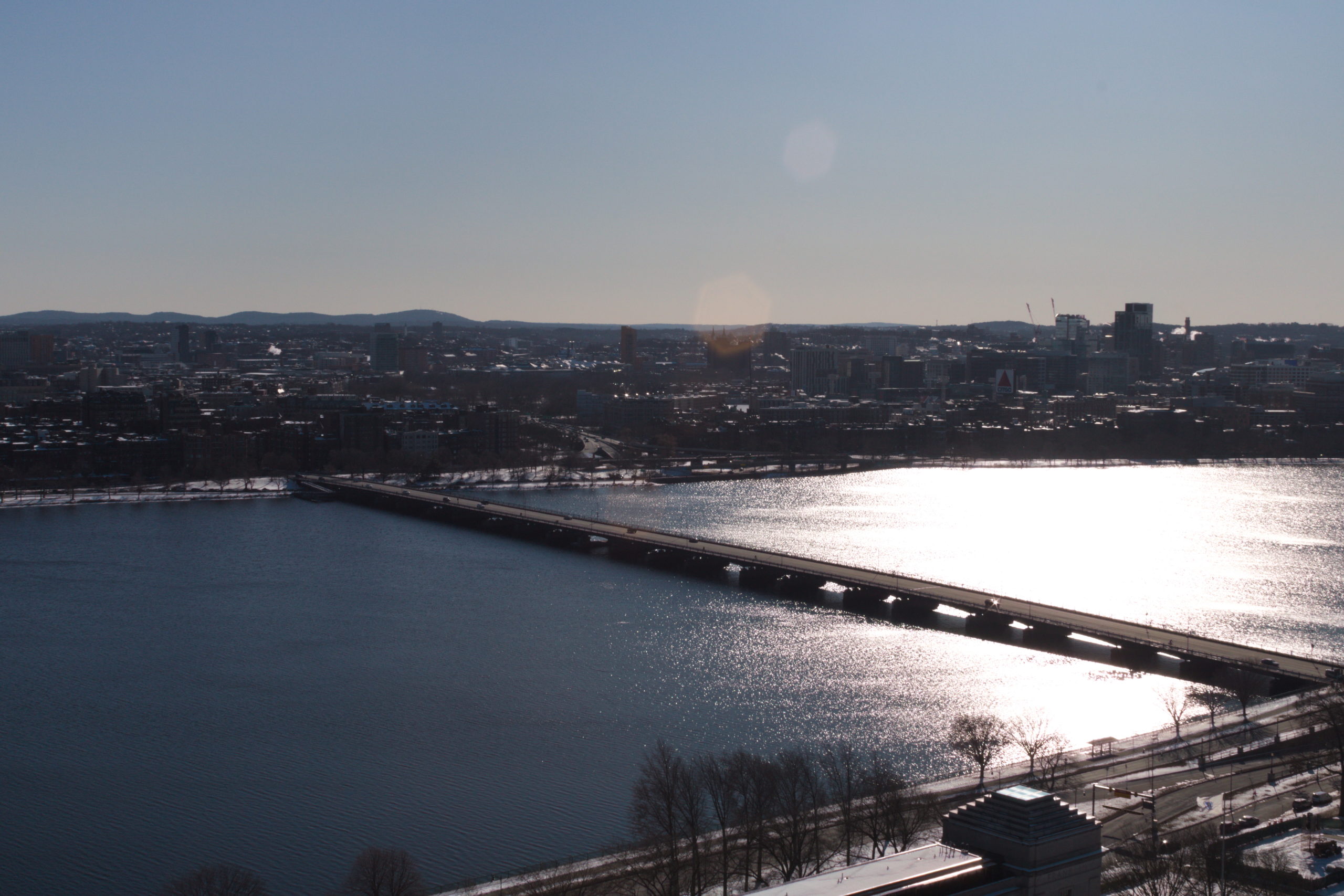