life isn't all being hosed

In my last blog post, I mentioned that one nice benefit of becoming a Master’s student instead of an undergrad is that I have a bit more free time to have fun. I promised to write more about the fun stuff I’ve been doing, and this is that post! Here’s some of what I’ve been up to :D

1. Trying out new places in my neighbourhood

Now that I Live In A Place TM, I have a Local Community TM. Admittedly I only lived 15 minutes away from here when I lived on campus, so really this used to be my local community too, but it feels a lot different when it’s right on my doorstep. Along with my friends and my roommates, I’ve been on a mission to actually try all the cool places I live so close to! We’ve seen a live music show at the Middle East, tasted a cider flight at the Artifact Cider Project, and tried out several new restaurants. (My fave is Rangzen Tibetan, if anyone local wants to know :) It’s a bit embarrassing how much cool stuff we lived so close to without ever really realizing it, but it’s super fun to get to take advantage of it all now.

It’s pretty common around here for people to use our October long weekend (Indigenous People’s Day) to go camping – it’s late enough in the season that the trees are usually beautiful colors, but not so late that you freeze your whole butt off. So a few of my friends and I went camping and only froze half our butts off! We went to Wompatuck State Park, which I’d never visited before, for the primary reason that it was a nice-looking park that you could get to on the T, therefore saving us from having to pay for a rental car. The park was indeed beautiful and we had a lovely time going on hikes and cooking over the fire. (And dropping food into the fire, and fishing food out of the fire…)

A cute pond we saw. Credit for camping photos goes to my roommate Caragay '22
We saw a lot of deer.
Our fire (post dropping a lot of hot dogs and marshmallows into it by accident)

I took up poi spinning as a hobby over the summer as something to do when I was alone in my little New York apartment. I really liked it and I’ve been keeping it up with it during the semester, although my rate of picking up new tricks has definitely slowed 😅 Our Spinning Arts club usually hosts one spinjam (lots of people all spinning different props and teaching and learning from each other) and one firejam (spinning on fire, which requires more safety protocols and fewer people spinning at once) per week, and I’ve been able to make it to a lot of them so far. I’m just now starting to get to the point where I know enough tricks that I don’t have to just practice one particular trick over and over, but I can instead just put together whatever feels right, a.k.a. “flowing”. It’s really fun to just put on some music and move with it!

Trying out glowstick poi! Photo by my friend Jeffrey
My first time on fire! Still of a video shot by Petey

Last semester I took the beginner glassblowing class and absolutely loved it; this semester, I’m lucky enough to be able to be involved again. It’s honestly even better than last time. In a way, it’s actually quite similar to spinning. As I get more experience, I still have to work hard and pay very close attention to what I’m doing, but rather than controlling each piece of my body, it feels more like the focused intentions in my mind transfer themselves through my body to the piece I’m working with – just like flowing with poi, it’s almost like I can flow with the glass. (No pun intended, but hot glass does literally flow :P)

It’s a bit of a tradition in East Campus, and therefore among East Campus cruft,⁠01 alumni to have some kind of weekly dessert night where the hosts provide dessert and all their friends come over to eat and chat. At my house, it’s called pancake night (because we didn’t want to step on the toes of an already-established waffle night and pancakes were the next thing we thought of). Every Sunday night at 8.30 pm, we prepare our pancake batter (or apple pie crust, or cookie dough) and friend after friend rings our doorbell and sits down on our couch. Every single week, my roommates and I think, maybe this is the week no one comes – but every week, by the end of the night we’re running low on pancakes or pie or cookies. Sometimes during a busy week, I don’t end up hanging out with much of anyone except my roommates, but then there’s always pancake night to remind me how lucky am I to have so many lovely friends.

Last weekend my roommates and I went apple picking! We went to Honey Pot Hill (at a very cheap price thanks to subsidies from the Graduate Student Council) and the weather was absolutely perfect. We walked around picking up apples, taste-testing different varieties, and laughing and hanging out in the sun. It was one of those days that’s perfect just because it is. I can’t justify just why it should be so beautifully satisfying to be walking through an orchard on a crisp sunny day with the people you love – it’s obvious and yet also inexplicable. It was a good reminder of how joyful life can be.

There were a lot of apples. Perhaps unsurprisingly.
Having some fun waiting for the hayride. Credit to my roommate Maddy H. '22
Trying to figure out how to get out of the hedge maze. Credit to Caragay

Scheduling and then doing a specific fun activity is great, but it also feels amazing to be able to do something on a whim, just because I want to and because I can. I coded up a little web app when I had a fun idea for an app; I play board games with my roommates and we’re partway through a puzzle right now. I baked a cake on a school night. I signed up for a LARP just because I’d never tried one and I was curious.

For all of undergrad, I was always running short on time, having to save it and budget it and allocate it so carefully. If I budgeted well enough, occasionally I could spend a little time on fun. But now I have enough extra time that I can afford to spend it on a whim, without triple-checking my calculations and worrying over whether it will all balance out. It feels like freedom. It feels really good. 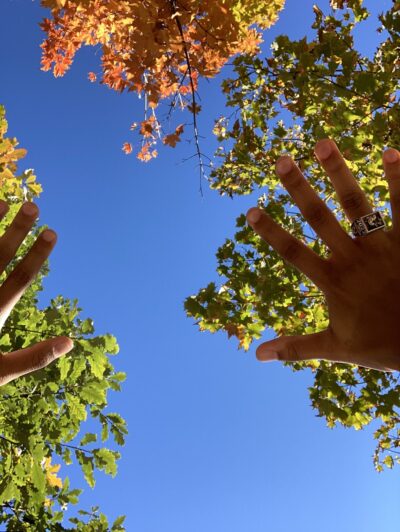 Just a picture I took and liked :)