On Friday, September 4th, I arrived in my office shortly after 7AM. One of the lovely things about my office is that I have a window under the Great Dome, overlooking Killian Court. It’s a beautiful view, especially in the early rays of daybreak, when the sun strikes my solar-powered prism and sprays rainbows down the walls. While adjusting my standing desk and settling into my morning routine, I looked, as I so often do, out through the trees, onto the lawn, past the enormous catapult, and across the river to —

past the giant catapult. 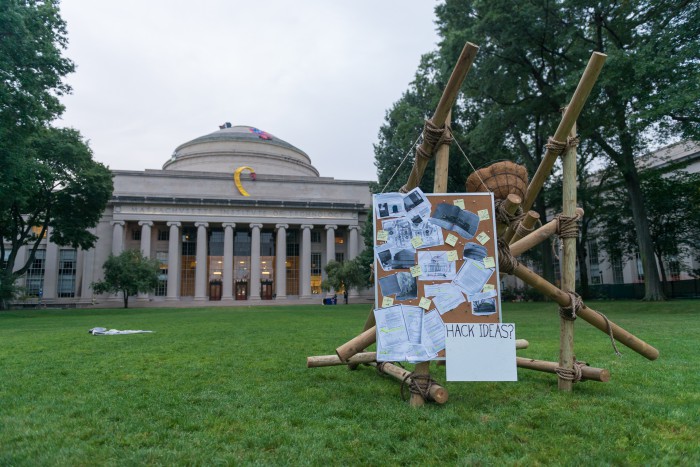 Yes, there was a hack – a hackapult, to be more precise. According to the IHTFP Hack Gallery:

In an attempt to answer the age-old question of how hackers manage to access the dome, a multi-part hack appeared on the morning of September 4, 2015 which suggested one method: a catapult, nicknamed the “hackapult”, which was used to fling older hacks back on the Great Dome. The hack referenced numerous hacks which have appeared on the Great Dome in the past…[and] quickly gained the attention of the local Boston media, with three news copters flying overhead by 8:00am and two ground photographers shortly thereafter. The Boston Globe reported soon after with “In latest MIT hack, a tribute to pranks of years past”.

I stood outside admiring the hack for awhile with former blogger — and East Campus Historian — Danny B.D., as well as Chancellor Barnhart and Provost Schmidt, as the news crews assembled and traffic copters flew overhead. 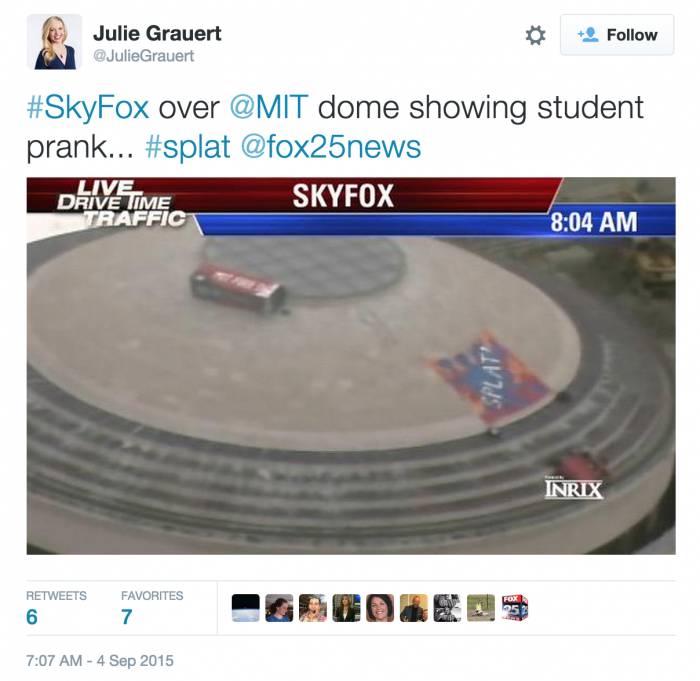 MIT facilities started dissembling the hack by 8:30AM…but not before some members of facilities took some selfies on the dome. 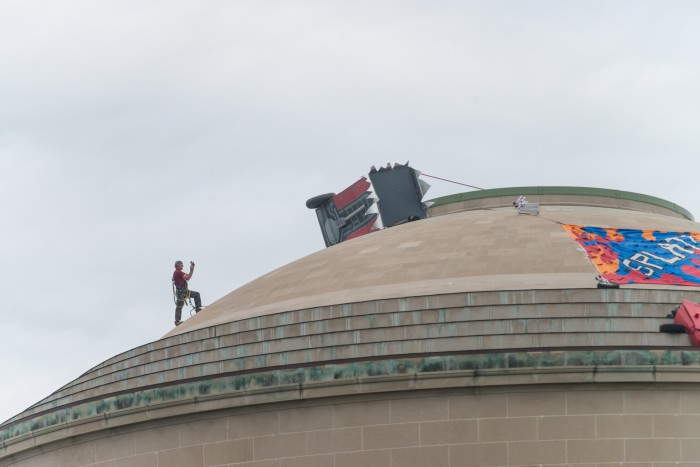 Most of it was down by noon. In case you missed it, here are some photos, courtesy of Landon Carter ’17. 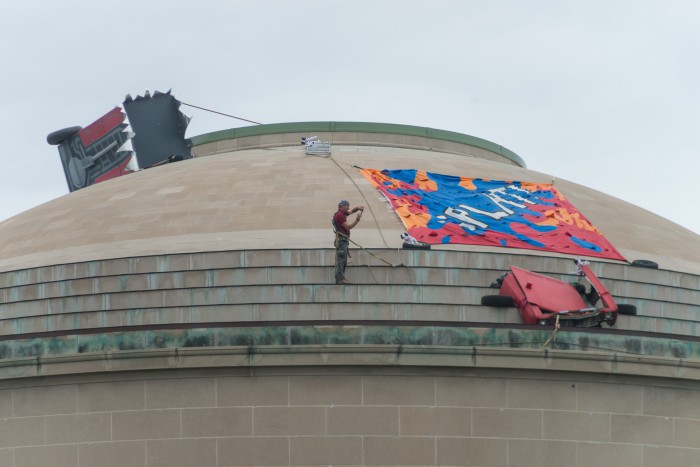 MIT facilities inspects the ‘damage’ to the Dome 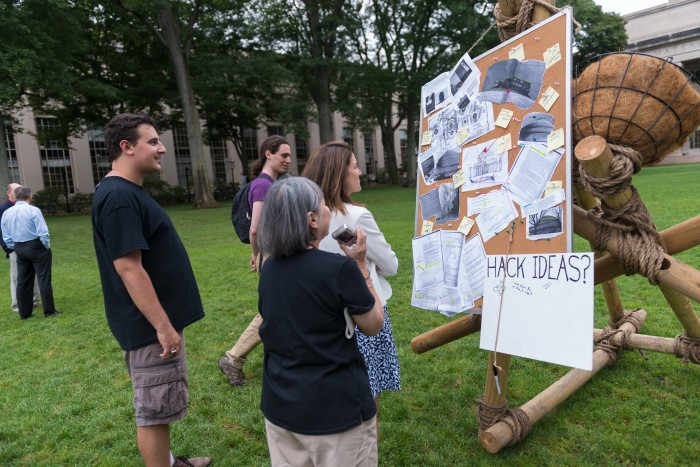 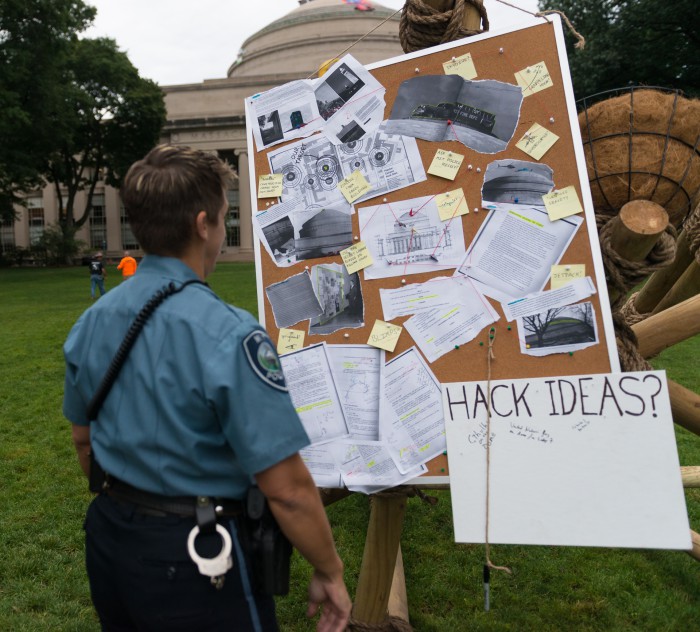 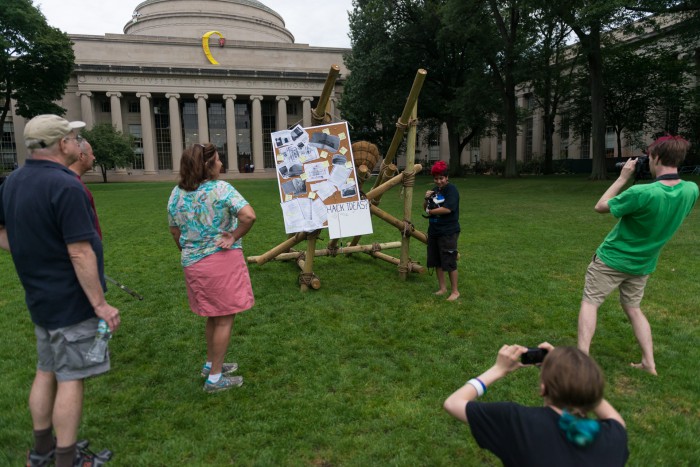 Onlookers pose for pictures with the hack 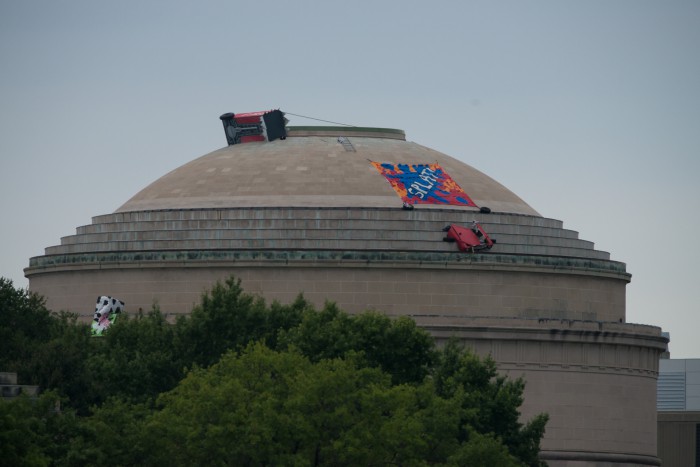 A view of the hack from across the court 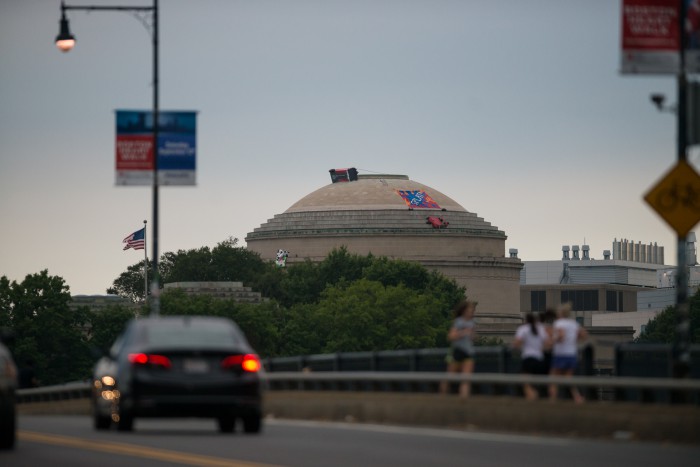 A view of the hack from the Mass Ave Bridge 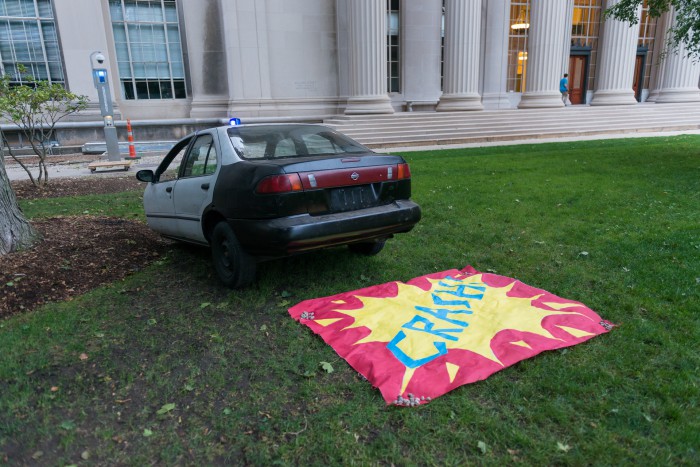 Looks like the police car fell a bit short! 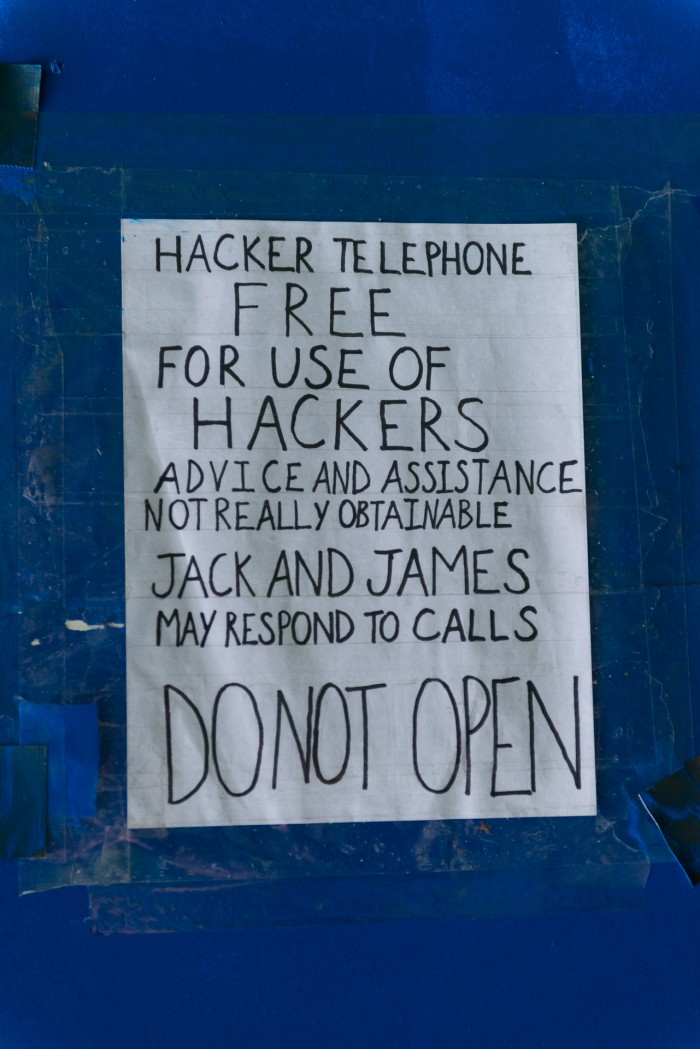 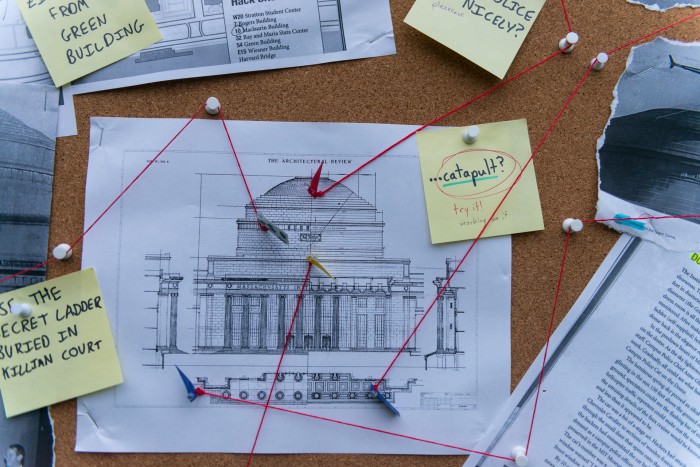 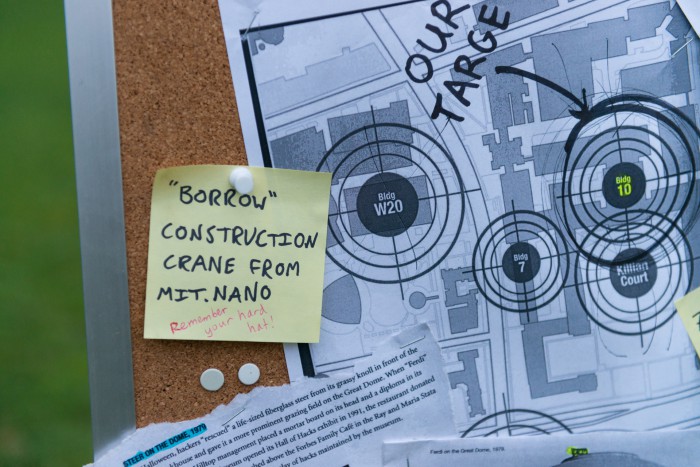 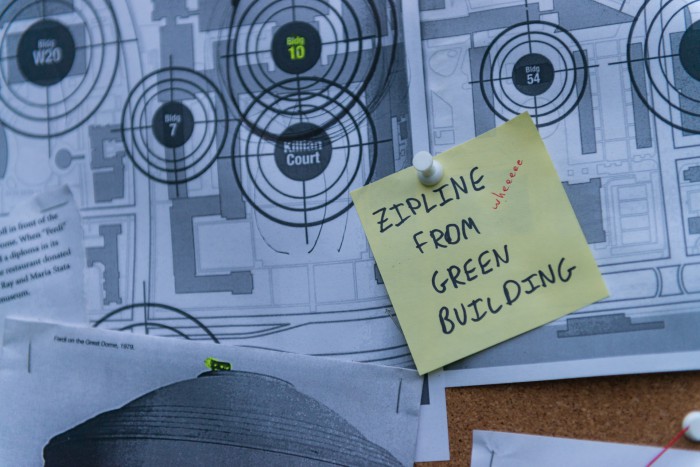 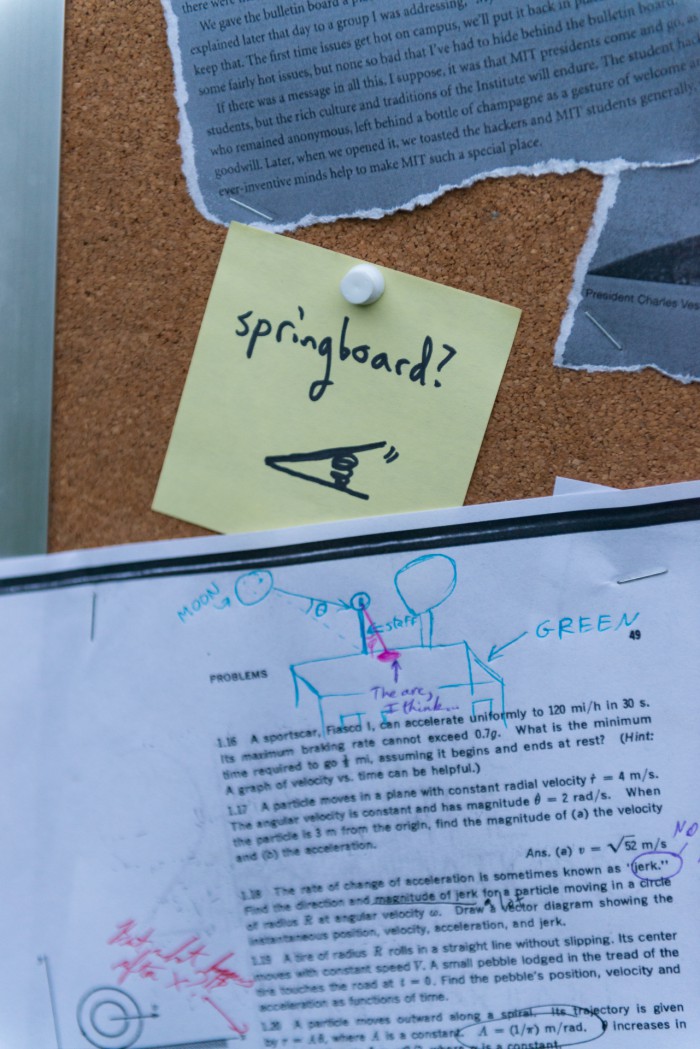 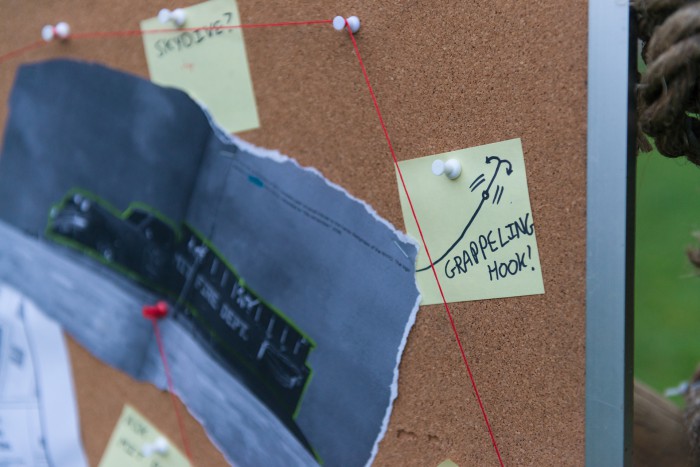 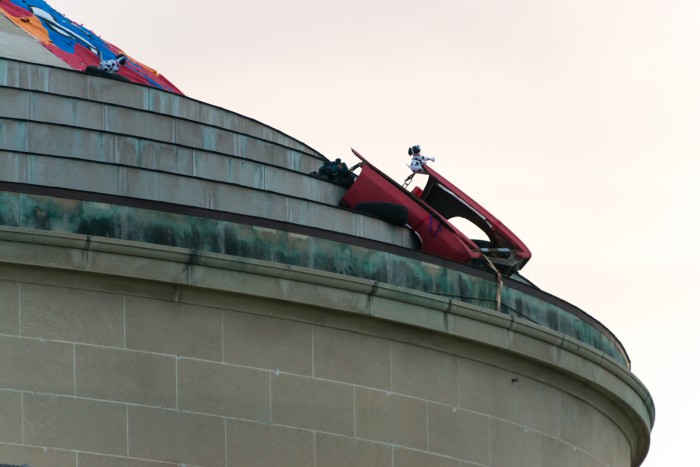 No dogs were harmed in the hacking of this hack 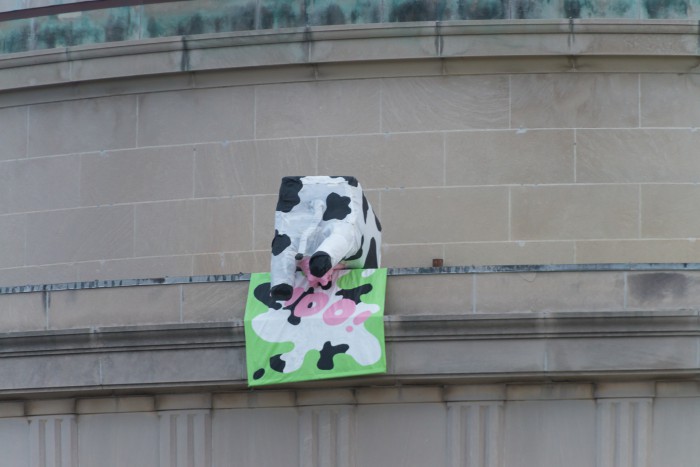 but I can’t say the same for the cows. Those tender, tender cows.