the Milk is now old enough to drink, but *please*, don't drink the Milk

21 years ago today a very special carton of milk was brought home from the supermarket to a dormitory at MIT. It has lived there ever since.

If you’ve never met the Milk, then you should read Vincent’s biography of the Milk that he posted on these blogs two years ago:

Nineteen years ago, a fairly lactose-intolerant resident of Random Hall decided to make Macaroni and Cheese for dinner. Deciding that a little carton of milk couldn’t possibly hurt, he made his way to Shaw’s, a grocery store, braving and somehow surviving the treacherous Boston weather. Being an MIT student, he bought the milk carton and made his way to his floor—Bonfire—only to realize a grievous error. He had forgotten to get any macaroni!

Ultimately, he decided that Mac and Cheese wouldn’t help him complete his p-sets or levitate objects and he could probably do without them. The milk carton, despite its cream-filled protests, was chucked into a refrigerator, in which a stretch of time found it confined.

The Bonfire Resident perhaps came across this carton a couple of times over the next few months, and probably figured, “Hmm, definitely not mine. I’m lactose-intolerant.”” Other residents probably came across this curious carton and figured, “Definitely didn’t buy it. Would be so good on my plate of Cheerios right now, but I should probably just stick to my stuff.”…

Eventually, a few months later, someone took notice of Milk and stared at his expiration date—October 20, 1994. It had already expired, and belonged in the trashcan, but somehow, for some reason, Milk wasn’t so gracelessly disposed. Perhaps the wealth of disciplined persistence he’d built up over the months had come across to his finders in some way. Maybe MIT students just like to have fun and decided to see how long Milk could last.

Either way, Milk was let to live, and is currently one of the oldest and proudest residents of Random Hall.

I once asked a former resident of Random Hall why the milk had never been thrown away. He grinned, sort of spread his arms wide, and asked, “Why throw something away when you can tell a story about it?”

Anyway, the Milk turns 21 today, which reminds me of another story: last year, around January 1st, we received a paper application in the mail. This was odd, because we don’t have paper applications anymore; also, because the application was from a (then) twenty-year-old carton of milk that lived in a hermetically sealed jar in Random Hall and is occasionally, disgustingly burped.

Regrettably, we were unable to offer the Milk admission to MIT in the Class of 2019, despite its impressive achievements, lively culture, and solid performance in AP Cowculus. Unfortunately, its negligence w/r/t basic testing, not to mention the logistical curdles posed by its potential mootriculation, made us think that the Milk might be best served by continuing its current course of self-directed educowtion. Fortunately, the Milk remains a bubbly member of the Random Hall community, and, I suspect, won’t be departing MIT anytime soon.

I have embedded the Milk’s application (with permission) below; you can also download it.

edit: Yongquan from Random sent in this photo of the Milk celebrating its birthday with all of its friends last night. 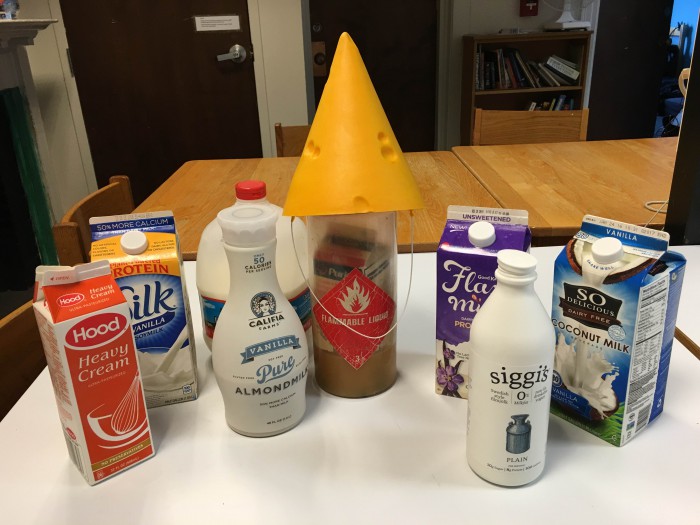