*hosed: in a constant state of business, stress, and exhaustion; swamped and overloaded with work, with no end in sight; essentially attempting to drink directly from a firehose.

Here’s a quick look at my calendar and a recap of the past few weeks.

It’s been a whirlwind of events since the end of first semester. After my last final, 18.02/Multivariable Calculus*, I boarded a plane back to California–and boy was I glad to be home. I had not been back since June, and I didn’t know how much I missed home until I was back. It felt like a totally different place, for better or for worse.

I only stayed for 5 days, and then I was off to Washington, DC, with a friend and got a chance to explore the museums and monuments. I got sick with a sinus infection and decided to cancel my trip to New York short, which was a huge bummer. But I wanted time to rest, and went back to campus earlier than expected. Not a single soul was in sight, except for the security guard at the front desk, and a few passer-buyers on the street, but I spent the next few days in bed anyways, and literally just slept until my sinus infection went away.

*The passing grade was a 33%. More on that on a future post. 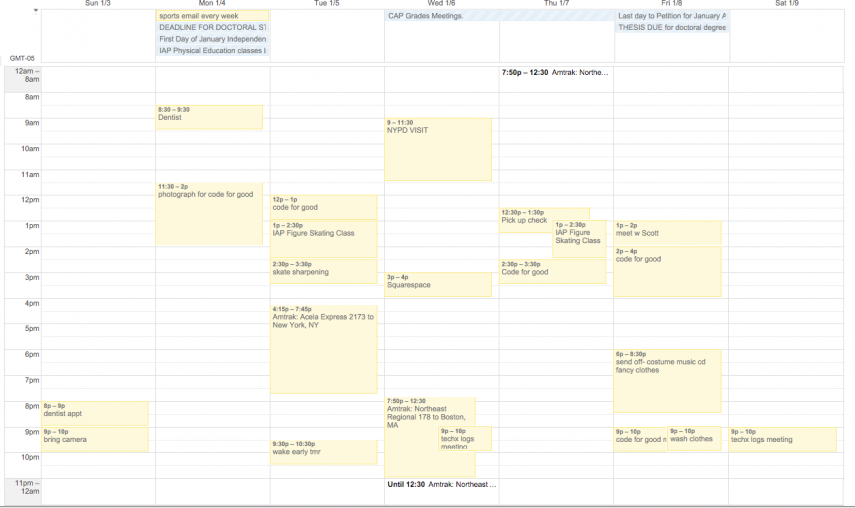 IAP, an optional January term, officially kicked off on January 4th, and people started returning back to campus. Yay people and friends! Over IAP, I TA’d the PE Figure Skating Class for two weeks, twice a week, for 1.5-hour session. Nationals was also coming up, just two weeks away. It was time to hunker down into training mode. I quickly transitioned from cramming for finals, to being touristy for a week, to recovering from illness, and then to full-time skating training.

Each morning I Ubered to the Skating Club of Boston, met with my coaches, and trained full-time for a change (not on calendar). It had been since summer when I had committed my time solely to skating, and it felt almost weird that I didn’t have finals to cram for or psets to scramble to finish. But skating it was–either at the Skating Club of Boston or at the MIT rink, or the Burton Conner or Z-Center gym.

Other things that happened:

***Shamless plug: check out the videos here and here! 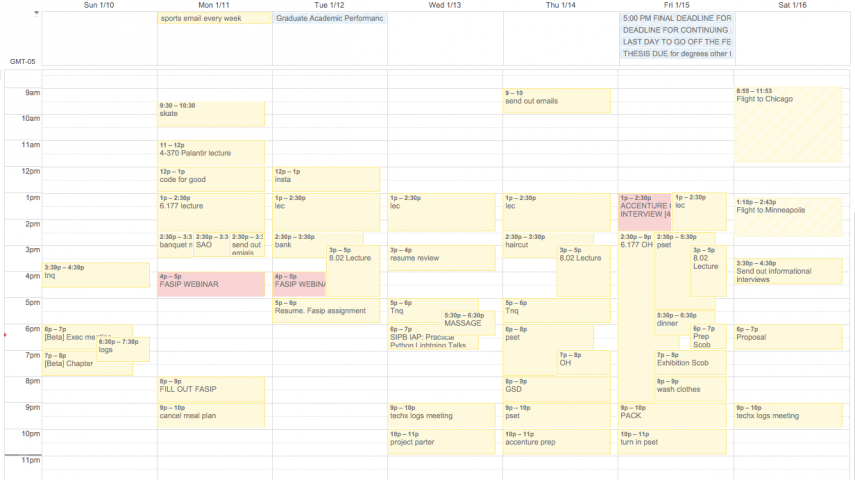 I enrolled in 2 classes for IAP–6.177 (Building Programming Experience in Python), a 6-unit class, and SP.800 (Freshmen/Alumni Summer Internship Program, aka F/ASIP), a 3-unit class. There’s actually a 12-unit credit limit during IAP, but there’s also a ton of various not-for-credit activities that happen throughout IAP. This website was constantly updated throughout the month with new things to do. I’m definitely glad I stayed for IAP–some opt to take an extended 6-week winter break and chill at home, some choose to apply for externships, some UROP on campus, and others like me stay on campus and take various classes and do random things.

With Nationals in the middle of IAP, the competition limited my options in terms of what I could sign up for. But that also meant that I didn’t have to miss school for the competition and I could commit time to training full-time without exams or psets in the way. 6.177 and SP.800 happened to both take place either before or after the week I was absent. 1.5 hour lectures for 6.177 took place every day of this week in addition to two F/ASIP webinars.

Off to St. Paul, Minnesota! The first few days were reserved for practice and to get acclimated to the arena ice and competitive atmosphere. And the weather too. It dropped to -30 degrees Fahrenheit with wind chill on the first few nights. To reiterate, it was m-i-n-u-s t-h-i-r-t-y d-e-g-r-e-e-s F-a-h-r-e-n-h-e-i-t. Like how even? Thank goodness there were shuttles to and from the rink, and the city also has a network of Sky Walkways that connect from building to building. It was MIT’s tunnel system raised into the sky!

I had some good practices, and the competition went well! I was third after the short program, and moved up to second after the free skating portion. With only two spots for the Junior World Championships in Debrecen, Hungary, US Figure Skating decided to send someone from Senior Men, the level above, along with the Junior Men’s champion to Worlds, and I was named first alternate. So the season’s not over yet–after a short break, it’s now back to training again. 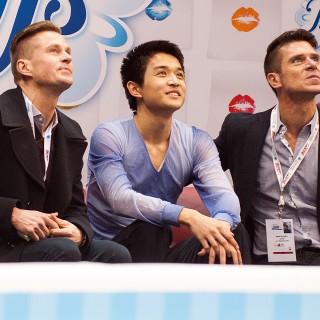 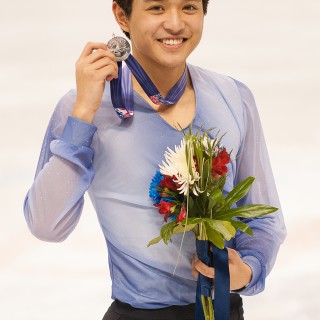 Awaiting my scores with my coaches in the Kiss ‘n Cry. Photos by Leah Adams.

I left the morning after my event ended in order to get back for my 6.177 group presentation, and didn’t get a chance to watch the rest of the competition. Luckily, though, the Senior World Championships is coming to Boston in March! Definitely stoked to watch! 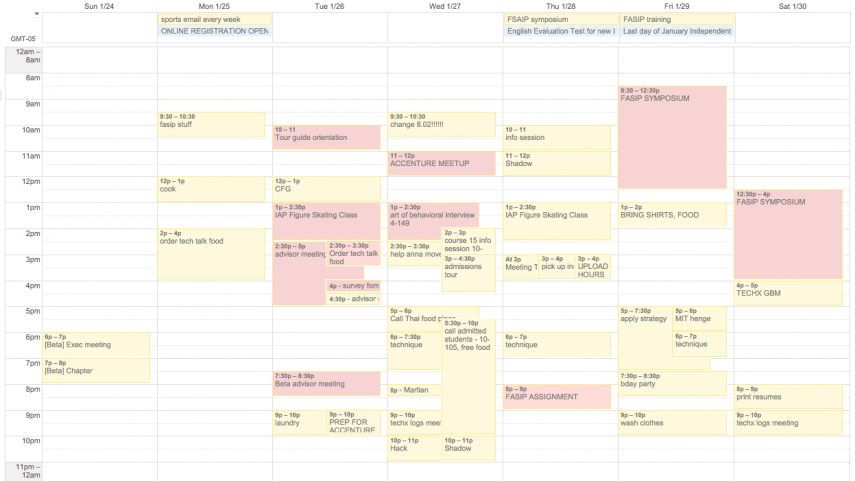 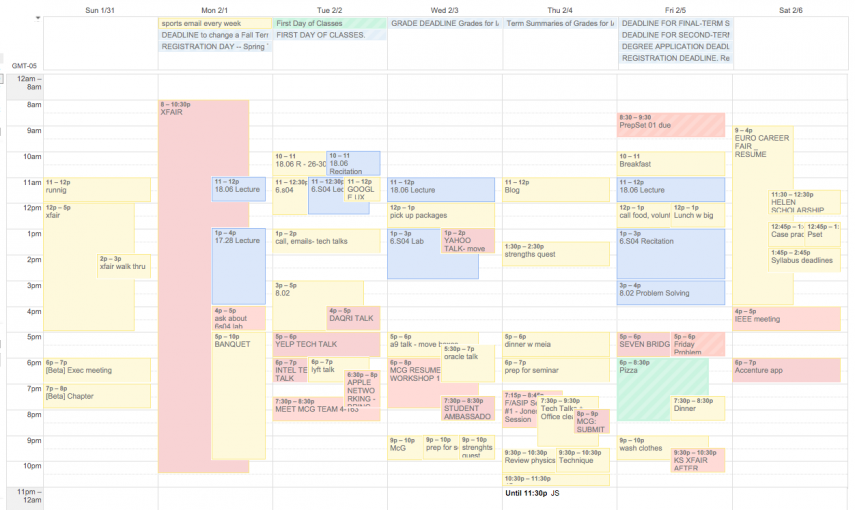 Sunday was spent doing final preparations for xFair. The Logistics Team got up at 5am to get the entire career fair set up in Rockwell Cage. A lot of coffee got our team through the long day. The fair went from 10a-4p, and there was an invite-only banquet from 6-8p at the Cambridge Marriott Ballroom. After a long and exhausting day of setting up, running, and cleaning up the event (and talking to some companies and dropping resumes in between shifts), it was time for bed.

First day of Spring Semester was on Tuesday, but xFair wasn’t over yet. I was in charge of running Tech Talks throughout the week, and it was quite hectic to say the least, squeezing in classes, skating, and the talks in addition to MIT Consulting Group’s spring recruitment events. It was indeed one crazy week. 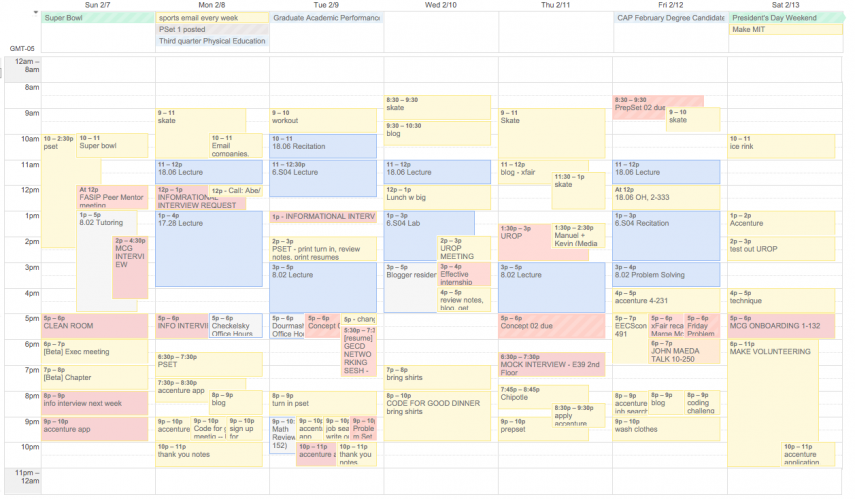 With xFair and the Tech Talks over, it was time to get into the grind of classes and psets. This semester I’m taking 4 classes plus F/ASIP.

And I started a UROP in the Media Lab. I’m working under a grad student who’s building an open-sourced data visualization platform for government expenditure data. Really looking forward to working on that this semester. 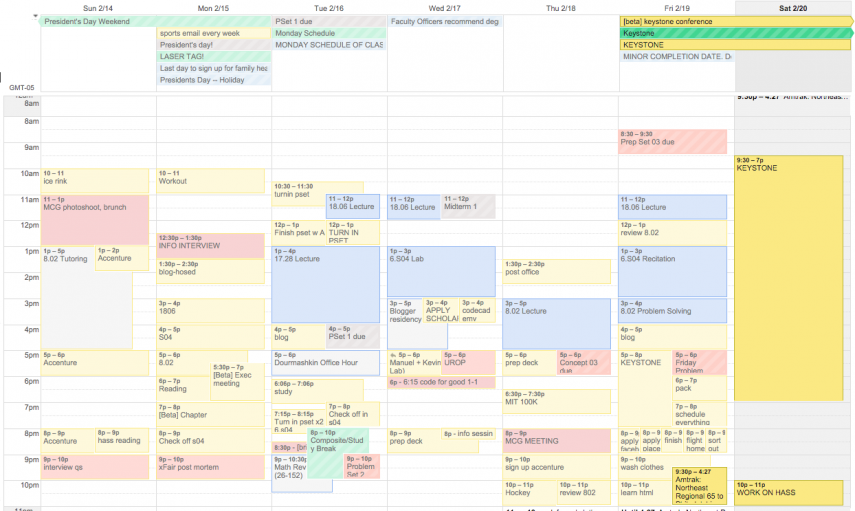 The past few weeks have been never-ending, packed with activities, classes, psets, events, skating, internship searching, among other things. Add sleep in there as well.There’s so much more that happens beyond the events listed on my calendar–meeting up with friends, psetting, studying, cooking, cleaning, working out, having fun, and just relaxing in between commitments. And a ton of other things that I forgot to add to my calendar or are on my todo list instead. And I can barely even parse out my calendar sometimes because there are so many events scheduled at the same time.

The expression, “Getting an education at MIT is like drinking from a firehose”–I’m just starting to comprehend what that means. It’s having so much on your plate and piling more and more and you’re really hungry but you don’t know what to eat first and how to get to the bottom of the plate let alone see the plate itself and you have to stuff yourself until you’re full because there’s also a time limit and you gotta finish that plate because who wants rotten or wasted food. OK, so that was a horrible analogy and I’m more mind-dumping at this rate. And I’m also really hungry right now. And I’m on a train to Philadelphia for a Beta Theta Pi Leadership Conference as VP of Risk Management this weekend, and it’s 12:31a and I just want to sleep.

That’s probably enough for now. ‘Till next time when I’m a bit less hosed.