how to become a morning person by Mel N. '24

a matter of willpower

Let me just start by saying that, historically, my sleep habits suck.

For the past couple of years, I’ve used an app called Sleep Cycle to track my sleep. It calculates my sleep quality by recording me through the night, which sounds kind of creepy on the surface and definitely raises some privacy issues, but I simply choose not to think about it too hard. Besides, it gives me a lot of insight into my personal data: when I fall asleep, when I wake up, and my trends throughout the years.

If you asked me whether I was a morning person or a night owl in high school, I would’ve said night owl before you even finished your question. “That’s when I’m most productive,” high school me would’ve told you.

That wasn’t necessarily the case, though. I spent most of high school in a vicious cycle of sleep deprivation and procrastination. I stayed up late to do my work, got up early for school, took a nap after classes because I was too tired to work since I’d stayed up late, vibed for a few hours, then had to work deep into the night again.

I started tracking with Sleep Cycle halfway through junior year, in January 2019. On average, it tells me that I go to bed at 2:03 AM and wake up at 9:10 AM. Of course, my sleeping habits vary depending on where I’m at in the school year, since this also covers summer, but possibly the biggest thing skewing my data is the Great Quarantine Shift. 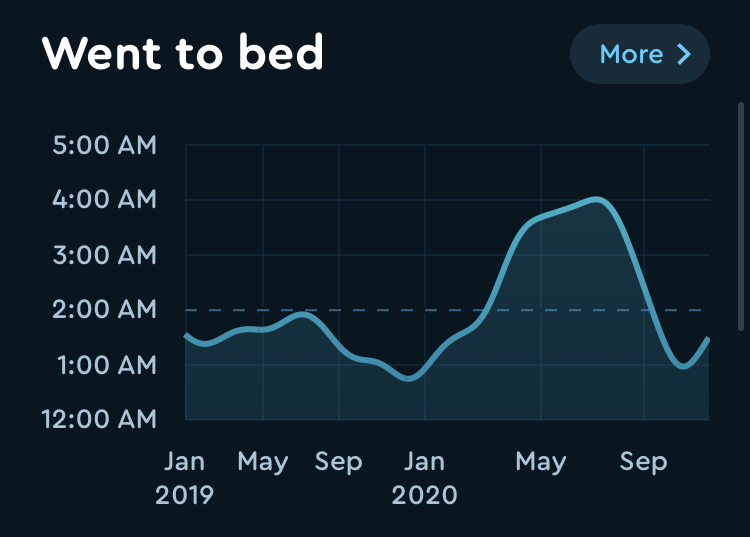 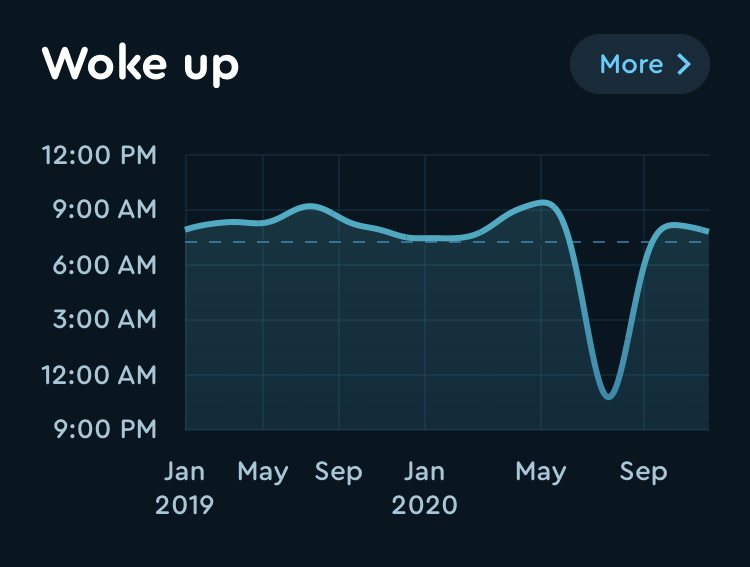 So…yeah. Quarantine majorly screwed me up. I was basically operating like I was in a different time zone.

Then at some point after coming to MIT, I was like, “Oh my god, I can’t go on like this.” Because first of all, my sleeping habits during quarantine were just ridiculous, and second of all, I did not want to fall back into that high school cycle of late nights and naps. It was also because it’s a lot easier to process STEM-related content in the mornings than at night. Doing math at night is never fun.

What I’ve found is that staying up late is often a matter of willpower and self-control. I always say I’m going to sleep earlier, but the process of getting ready for bed has way too many steps.

If you really want to break it down:

Doing this is just a lot of effort, especially when my energy levels are low. Eventually, I get so exhausted that I force myself to go through the steps, but by the time that happens, it’s already late at night.

There’s really no other way around it than willing yourself, though. You have to do things you don’t like if you want to go anywhere. And I think there’s a certain kind of satisfaction you can get from conquering the unproductive part of yourself–a sense of achievement, even if it’s just something like doing the first step and getting up.

That’s the strategy I’ve been employing lately, and it seems to be working. Here’s my data from just the past few months. 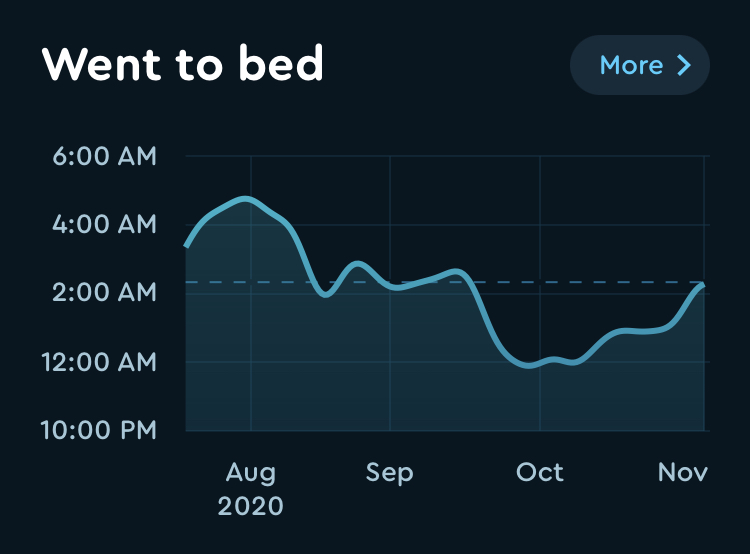 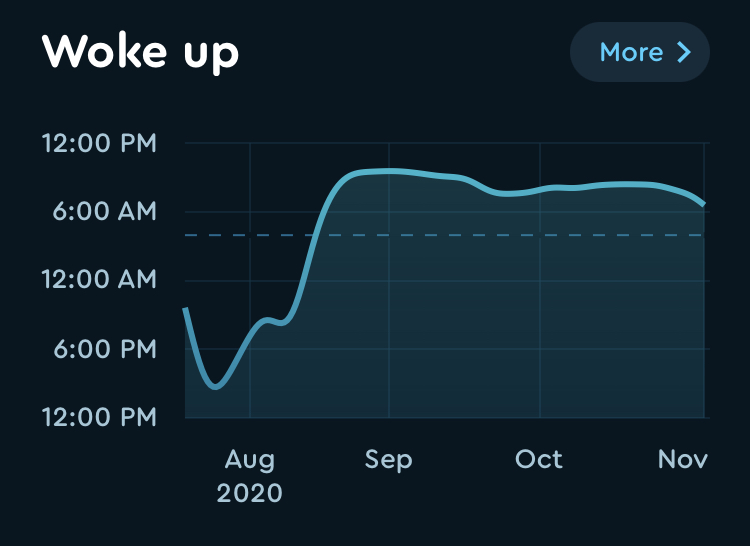 Generally, I’ve been trying to go to bed before midnight and get up anywhere from 6 to 8 AM. After I get comfy, I use sleepyti.me to calculate when I should wake up so I can have complete sleep cycles and I won’t be groggy when I wake.

I’m a pretty light sleeper and I only ever need one alarm to wake up. Sleep Cycle has an option where I can randomize my alarm, which is nice because it means I don’t have to be filled with dread when I hear it in the mornings since I have no idea what it’s going to be.

And being the first one awake in the mornings is so nice. My routine is to wash my face, eat a cup of yogurt and a muffin, wash the dishes while watching anime (currently it’s Haikyuu!!), then settle down and do my work. Feeling the early sun shine on me as I sit by the window and having the kitchen (where I usually work) to myself is wonderful. My head is a lot clearer after a good night’s rest too, which means I’m more productive.

Sometimes I slip up, though. I let the part of me that doesn’t want to move from where I’m sitting take over, and I lose hours of sleep instead of starting my night routine. When that happens, I just have to slowly bring myself back to normal. This isn’t the kind of thing you can fix in a single day.

So if you asked me now if I’m a morning person or a night owl, I would say I’m a morning person in training. I’m trying my best to find a rhythm that works for me, and I’m pretty happy with the way I’m doing things right now. I hope I can become a fully fledged early bird at some point!