It occurs to me that I haven’t told you much about what I’m doing this summer, which is sort of embarrassing since I keep making reference to it. So, here’s a snapshot of what I’m doing RIGHT NOW, at 11:52am on a typical day at work.

I’m in an office with four other undergrads, from all over the place: BU, University of Kansas, UVA, Macalester College. They’re all rising seniors in physics or astronomy; I’m the baby here. The name plate on our door has four slots, taken up by

AWESOME
PEOPLE
ARE
HERE
which is, in fact, just as accurate as having our names up there.
We are summer students at the National Radio Astronomy Observatory (NRAO) headquarters in Charlottesville, Virginia. Trey over there by the window is looking at hydrogen regions in the galaxy (actually, he just walked out of the room to talk with his supervisor), Stephen sitting across from me is doing some crazy-impressive mapping of the Whirlpool galaxy (for his birthday, we made a Whirlpool Galaxy out of cake, frosting, and disgusting quantities of food coloring), Linus* behind me is reading a paper right now but can usually be found graphing properties of ORGANIC MOLECULES IN SPACE (presumably because he realized that adding “in space” to the end of something makes it awesome) and Arlo to my left is making models** of infall and other processes in protostars, with his headphones on as usual. There are nine summer students in total (the others are in an office down the hall) all doing original research under different supervisors, all from different universities. I actually applied to this program last year, but didn’t get in – which makes being here now even more satisfying.
*His name isn’t actually Linus, but he made a lot of “PEOPLE ARE GOING TO STALK ME THROUGH THE INTERNET NOW” jokes when I used his real name, so I’ve given him a pseudonym.
**Arlo: “When people ask what I do, I say: super models. Of space.”
Our windows are open, because it’s a nice day outside for once – Virginia has been ridiculously hot recently (104 degrees over the weekend, in my new Fahrenheit vocabulary. I’m slowly getting used to the fact that, when I speak in Celsius, people either (a) think I have no concept of temperature or (b) think I’m a liar) but finally cooled down to a respectable temperature. There’s a calendar on the wall, with a picture of a spiral galaxy, and a Frisbee on the shelf. Each of us has two sheets of Emacs commands taped to the wall, because we’re geeks, and a cup of Something Caffeinated on our desks, because we’re astronomers.
Now, to my computer, since I spend 90% of my day looking in this direction. I currently have four windows open: one in Firefox, proudly displaying the blogger interface, and three in the Terminal, displaying two Python scripts and the directory in which those scripts reside. Without Firefox, it looks something like this: 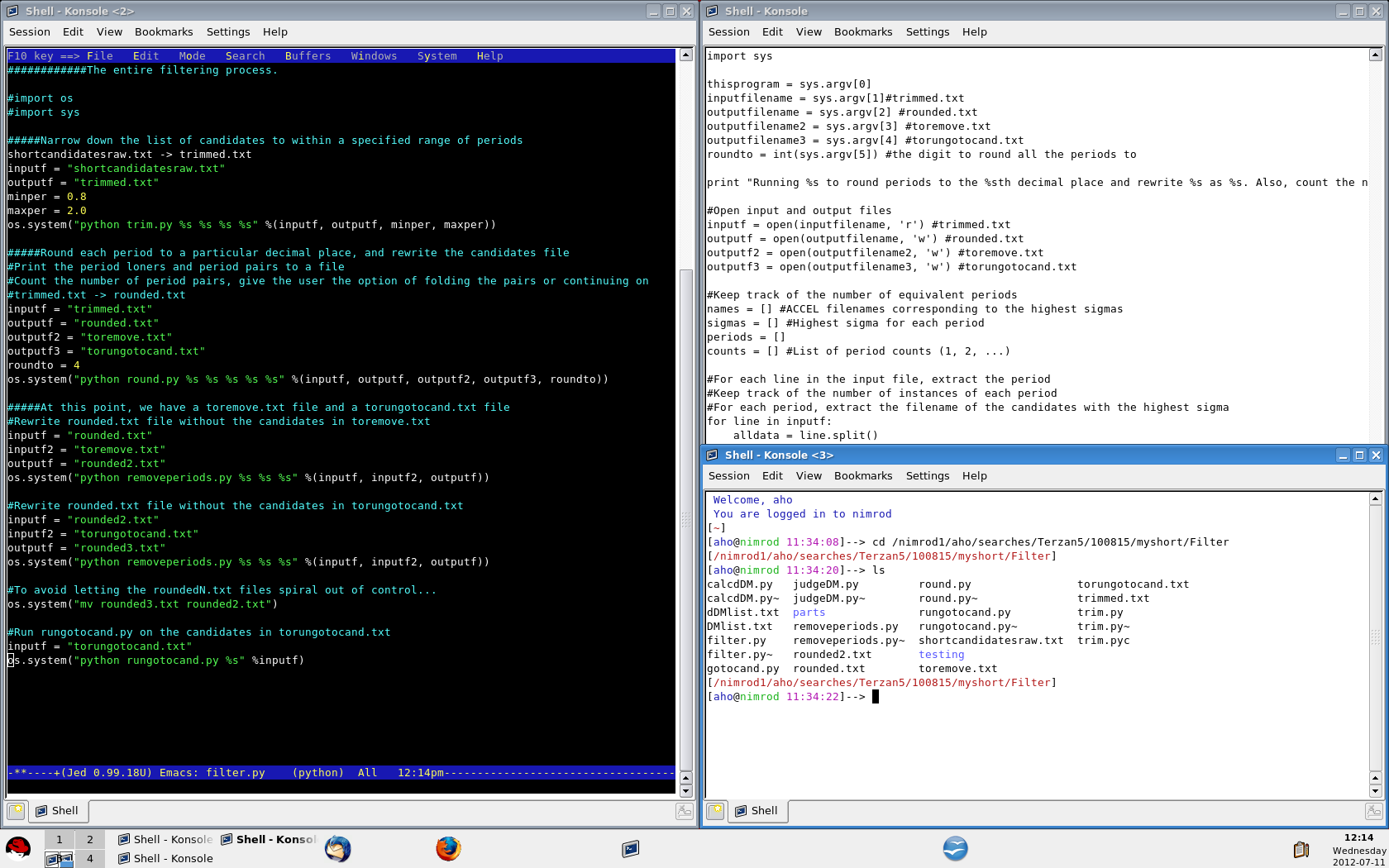 Oooooooooh, colors.
I spend most of my day doing stuff in Unix and Python, which is surprising, since I knew next to nothing about either when I arrived. A couple of days ago, I knew I had been using the Terminal WAY too much when I struggled for half an hour to open and print an image (WHY ARE THERE SO MANY DIFFERENT IMAGE FORMATS) before Stephen pointed out that I could just double-click on the Desktop icon.
…………………….oh, man.
Embarrassing nerd moments aside, here’s a little science interlude on my topic of research (actually, I guess this is just another nerd moment…forgive me): every website ever will tell you that a pulsar is a rotating, highly-magnetized neutron star. What they often fail to mention is that pulsars are well-acknowledged among Sensible People to be the most awesome objects in the universe. Basically: a star runs out of fuel, and can no longer prevent gravity from taking over. Gravity steps in, and the stars collapses in on itself while expelling its outer layers – this is called a supernova. If the original star had a particular mass (a mass in a particular range) then it becomes a tiny little neutron star, with a radius of about 12km. Its name comes from the fact that it’s SO RIDICULOUSLY DENSE that the electromagnetic force is no longer *in charge* (get it? get it?) – atoms and nuclei are crushed together, and protons and electrons combine to form neutrons. Also, as the star collapses, it starts spinning faster (you know, that whole angular momentum conservation thing). So, we’re left with a (VERY) dense, (VERY) rapidly-spinning, sphere of neutrons. I read online that the density is comparable to what you’d get if you squashed all of humanity down to the size of a sugarcube…not sure who figured that one out.
Pulsars are a subset of neutron stars. They have a strong magnetic field (a dipole) which causes a jet of radiation to be emitted from each pole. As they spin, that jet passes into and out of our line of sight, so the pulsars seems to “blink” – or, one might be inclined to say, “pulse” – just like a lighthouse.
One of my projects this summer is to find new pulsars using brand new data from the Green Bank Telescope in West Virginia. Another project is to calculate something called Rotation Measure, but since I’m not doing that RIGHT NOW it’s not relevant to this blog post. This is, after all, intended to be a snapshot + the requisite background information.
In ten minutes, we’ll break for lunch. Sounds of the office: typing, rhythmic desk-tapping, a circular saw (from outside, that is…no one’s project involves the use of a circular saw, although it WOULD be pretty effective stress relief), the occasional footsteps from the hallway, and the occasional scream of joy from me when my code finally compiles. Every now and then, someone throws a foam cup at someone else, for no particular reason.
In case you can’t tell, I’m geeking out here, and loving every second of it.