Two weeks ago I flew to Pittsburgh, PA, to attend the Intel International Science and Engineering Fair, or ISEF. If you’re unfamiliar with ISEF, here is a description from the Society for Science and the Public:

The Intel International Science and Engineering Fair (Intel ISEF), a program of Society for Science & the Public (SSP), is the world’s largest international pre-college science competition. Approximately 1,700 high school students from more than 75 countries, regions and territories showcase their independent research as they compete for approximately $4 million in prizes. The Intel ISEF is the premier global science competition for students in grades 9–12.

On Wednesday, May 13th, I arrived in Pittsburgh and, as is tradition, invited enrolling MIT 2019s who were at ISEF to a little reception. While some people had to stay with their teams, a few of us met up at the Carnegie Science Center, saw Songela ’19 (who works at CSC) light some things on fire, and also to watch some robots serve us froyo. 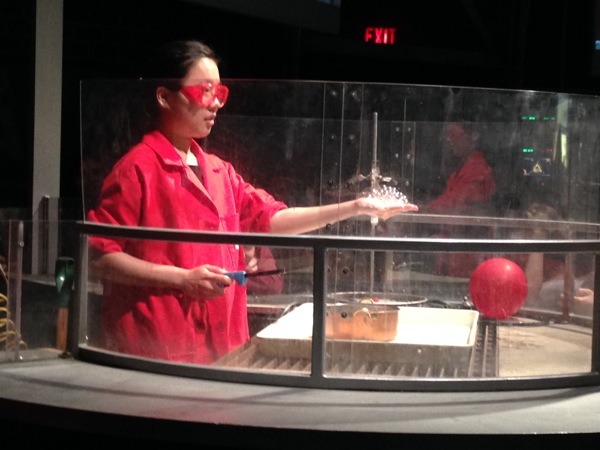 The next morning I gave a talk, with my friend and colleague Jamilla Jamison (formerly of our office, now at Harvey Mudd), about how to talk about your research in the college application process. The TL;DR is that most admissions officers, unlike ISEF judges, are not subject matter experts in your field of research. As such, the best strategy is to provide a ‘lay explanation’, i.e. to describe it to us as you would to an intelligent nonexpert, and trust that between your explanation and the support of your research mentor the significance of your work will come across to us. I may post another blog about research (and our new research portfolio) later this summer.

For the next two days, I wandered around the hundreds (and hundreds) of booths at ISEF, speaking with students there. Some I knew from the MIT application process, as there were dozens of students there who we had admitted (and who we didn’t). Some I knew from being prospective students, including one student who had been admitted to RSI for this coming summer, where he hopes to continue the math research that earned him a 3rd Award at ISEF this year. The vast majority I didn’t know, and, because of the number of people (and scarcity of time), I didn’t have the chance to meet. But reading about and listening to the award-winning research so many of them did as high-school students was pretty mindboggling in the most wonderful of ways.

I didn’t know anything about ISEF before I began working at MIT Admissions. We didn’t have science fairs at my K-12 school system, and nobody in my family or social network growing up was a researcher. If they had, I think I might have done it, and I suspect I would have liked it. If you’re potentially interested in ISEF, then you can learn more about it and look for an affiliated fair in your area.