my spread for Infinite Magazine Issue 9

Last summer, Kidist and I wrote about our experience with Infinite Magazine, MIT’s fashion and design publication. Since then, little has changed, but a lot has happened. Kidist is still the editorial director, and I am still the internal relations director. As a club, we put together and published our ninth issue this past fall semester, which I personally think was a great success. You can check out the full issue here. All of the spreads⁠01 we use the word spread to refer to one coherent project, usually taking up 5-10 pages of the magazine were really cool, and I highly recommend looking through them, but in this post I’m going to focus mostly on the spread that I directed for Issue 9, called “Knot Again.” 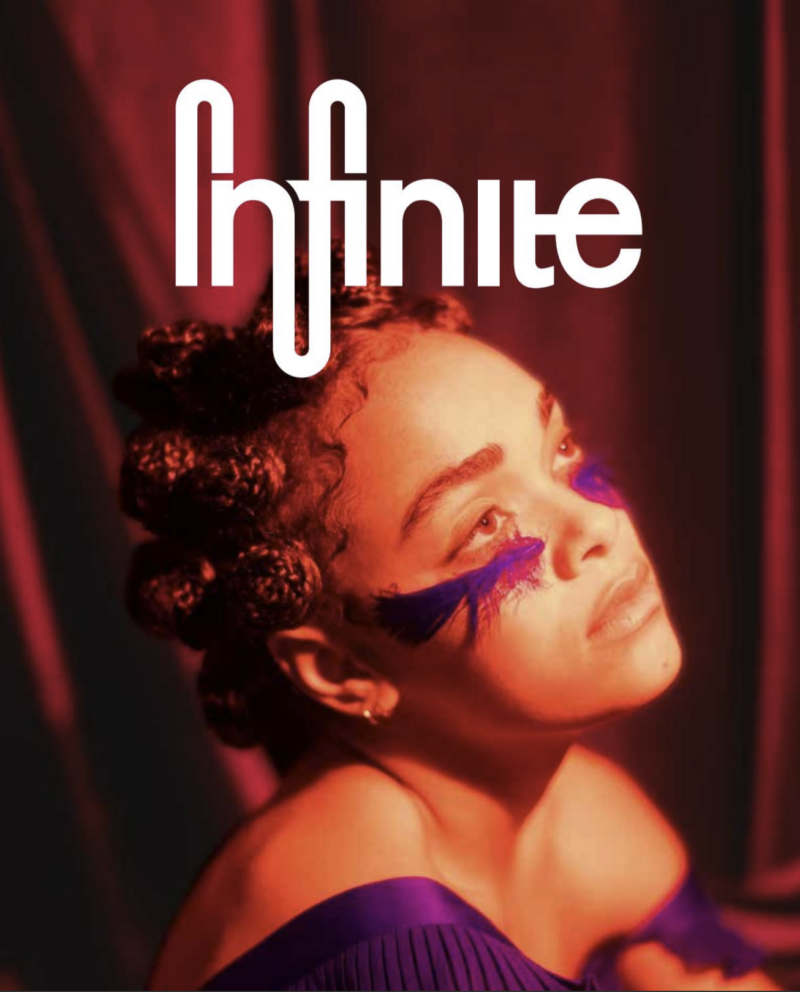 The theme for issue 9 was “chaos.” As usual, we chose this theme as a board through a collaborative brainstorm at the beginning of the semester. I remember being particularly excited about chaos, even as compared to the other options, so I was really pleased when it got chosen. There are so many cool places you could go visually with chaos! I couldn’t wait to see what everyone would do with this prompt.

Once the theme was chosen, I started brainstorming possible spreads. I knew I definitely wanted to do a spread for Issue 9, and specifically a more involved one featuring making, models, and generally other people’s involvement. I hadn’t really gotten to do that before because of covid and things being remote, so I was really excited to create something truly hands-on. Still, nothing immediately came to mind. I had various incoherent ideas floating around in my head – something about broken things, upcycled things, the aesthetic of a shattered CD disc. I must’ve been telling something along those lines to my friend Bukunmi, because she showed me the instagram of fashion brand Ai Mei Li, which sells these really cool dresses full of artfully placed cuts and knots: 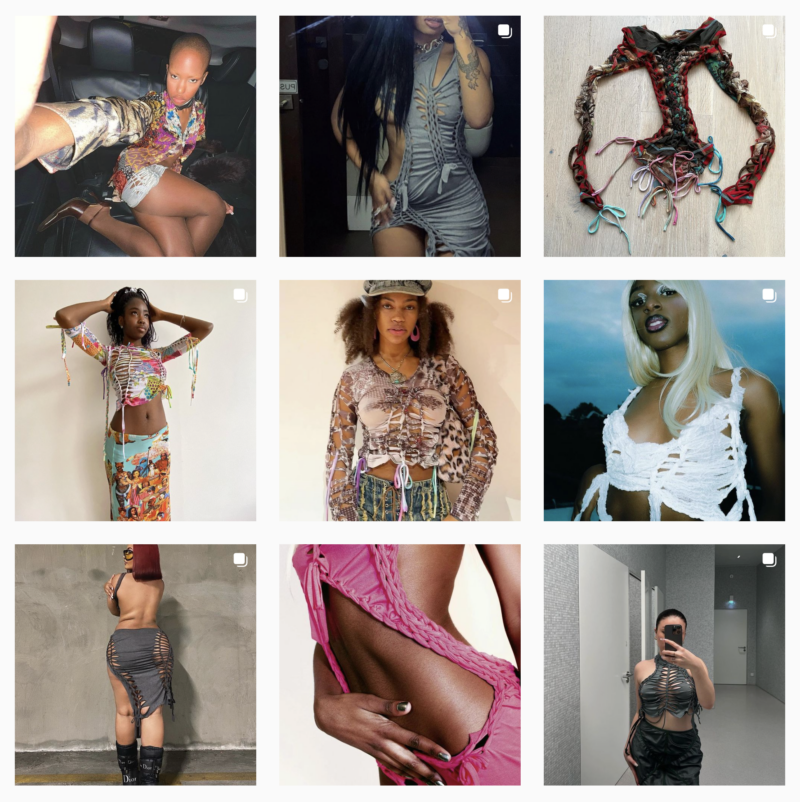 This was the inspiration I needed! I came up with a plan centered around one simple idea: knotted strips.⁠02 fun fact - this was the working title of the spread for the entire semester, and we came up with 'knot again' in the very last week We would take a pile of unneeded/discarded clothing, cut it into thin strips of fabric, and then assemble those strips into new pieces. The key was that we couldn’t use any thread or sewing, only knots, to hold the strips together. 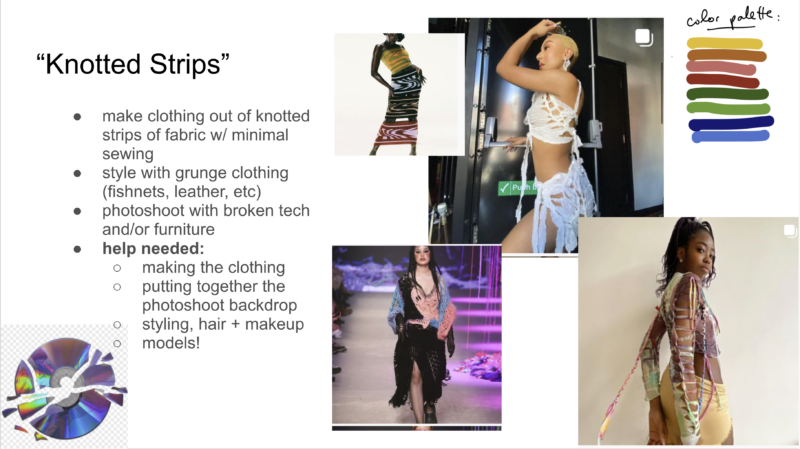 my slide from the general interest meeting where I pitched my spread to general club members. note that a couple of these ideas didn’t make it into the final spread

Once I had the spread idea, I submitted an application to be a spread lead, and was accepted. I then pitched the idea to the club at large, and was able to get a handful of people who would assist me in making the clothing, modeling, setting up the photoshoot, etc. Our first step was to make the clothing itself, which required obtaining the fabric we would use. A couple of friends and I made a trip to the Garment District, a thrift shop not far from campus that has a pay-by-the-pound pile of (mostly) ugly clothing. I had a general color scheme in mind, and we picked pieces that we wouldn’t feel bad cutting up into strips.

Once we had the fabric, we could start making! I unfortunately don’t have many in-progress photos of the clothing, but the process was pretty simple. First, we spent a long time cutting up the fabric into strips. Then, once the strips were ready, I more or less just started freehand knotting it together. For a couple of the pieces, such as the yellow top and the pinkish dress, I began first by tying together a loosely rectangular grid, and then fitting it to a model to make it into an actual item of clothing. For other pieces, such as the orange skirt, I worked with circular strips, and did much of the knotting on the model directly.

Once the pieces were finished, it came time to do the photoshoot! After a lot of back and forth on the exact location and style, I decided to have the shoot in the basement of East Campus. I was inspired by the different pipes and fences located throughout the basement, whose colors match the colors of the clothing we had made. I borrowed a large white sheet and a big lamp from the Student Arts Association, gathered the models and everyone involved with the spread, and brought them all up to my room in EC. There, we dressed the models in all black, save the knotted pieces, and did their hair and makeup. We tried to go for a grunge-y look in both clothing and makeup to match the ragged aesthetic of the clothing and the industrial setting of the basement.

The photoshoot was definitely the most stressful part of the entire project. I had never done something even remotely similar, and knew largely nothing about lighting, posing, or the like. Still, I really wanted to learn, and what a better way to learn than by doing? Instead of getting a separate photographer from the club, I chose to take all the photos and direct the shoot myself. Although, looking back, there are things I would want to do differently about the shoot, I am very pleased with how it came out! I was really nervous going into the shoot, and had my expectations set pretty low – the end result definitely surpassed them by far. In particular, I’m really impressed by my friends’ modeling skills  – we were able to capture some really interesting and powerful poses. I’m also really happy about the colors in the photos and the way the background interacts with the clothing itself.

The final step of the spread-making process was to compile the photos into a layout for the magazine. Once again, because I wanted to practice in a variety of creative skills, I chose to do the layout myself. Although I originally had plans to incorporate some sort of external graphics, such as a broken cd or the pattern of an oil spill, I ultimately decided to use as background blown-up versions of the backgrounds of the photos themselves. This way, the photos, as well as the close-ups of the clothes, blend more or less seamlessly into the page.

the final layout, as it appeared in the magazine

Overall, I am very happy with this spread turned out. It is definitely my favorite spread that I’ve done for Infinite so far. In addition to just resulting in a cool end product, the spread also taught me a lot about both the creative process and teamwork. I had originally started with a lot of ideas that I wanted to cram into one project: there was the grunge influence, the idea of broken things, of discarded technology, the aspect of sustainability and upcycling – all of these things on top of the vision I had for the clothing itself. As the semester went on, though, I realized that not only would it be too difficult and time-consuming to give all these ideas space in the spread, it would also take away from the main focus, which should be the clothing. Though it was difficult to let go of these pieces of the spread, I’m glad I did, and I think the end result is stronger for it. Another takeaway for me was that it is, in fact, hard to do everything yourself. Although I gained a lot of valuable experience in making, photography, and graphic design, handling all these components of the spread myself was definitely time consuming. I think, in general, I have a problem where I live by the motto “if you want something done well, do it yourself,” and not only is this unsustainable, it is also often untrue. Moving forward, I want to have even more collaboration in my spreads, while staying mindful of the fact that there’s a fine balance between easing my load and making the spread too difficult to manage.

This semester, for Issue X, themed “dimensions,” I am once again doing a spread. This time, though, I am co-leading it with a friend, in the spirit of learning how to delegate tasks better. For this spread, though, I will not be taking the pictures. Instead, I will try my hand at modeling, and let another of my friends, who is a professional photographer, take better pictures than I ever could. Generally, Infinite Magazine has been an incredibly important part of my MIT experience, and I’m excited to keep growing with it and keep helping it grow.