turns out that at mit, even the non-academics are incredibly hard and deeply rewarding

And here we are, in the fourth week of school. But hey! I did build that loft! And she is BEAUTIFUL: 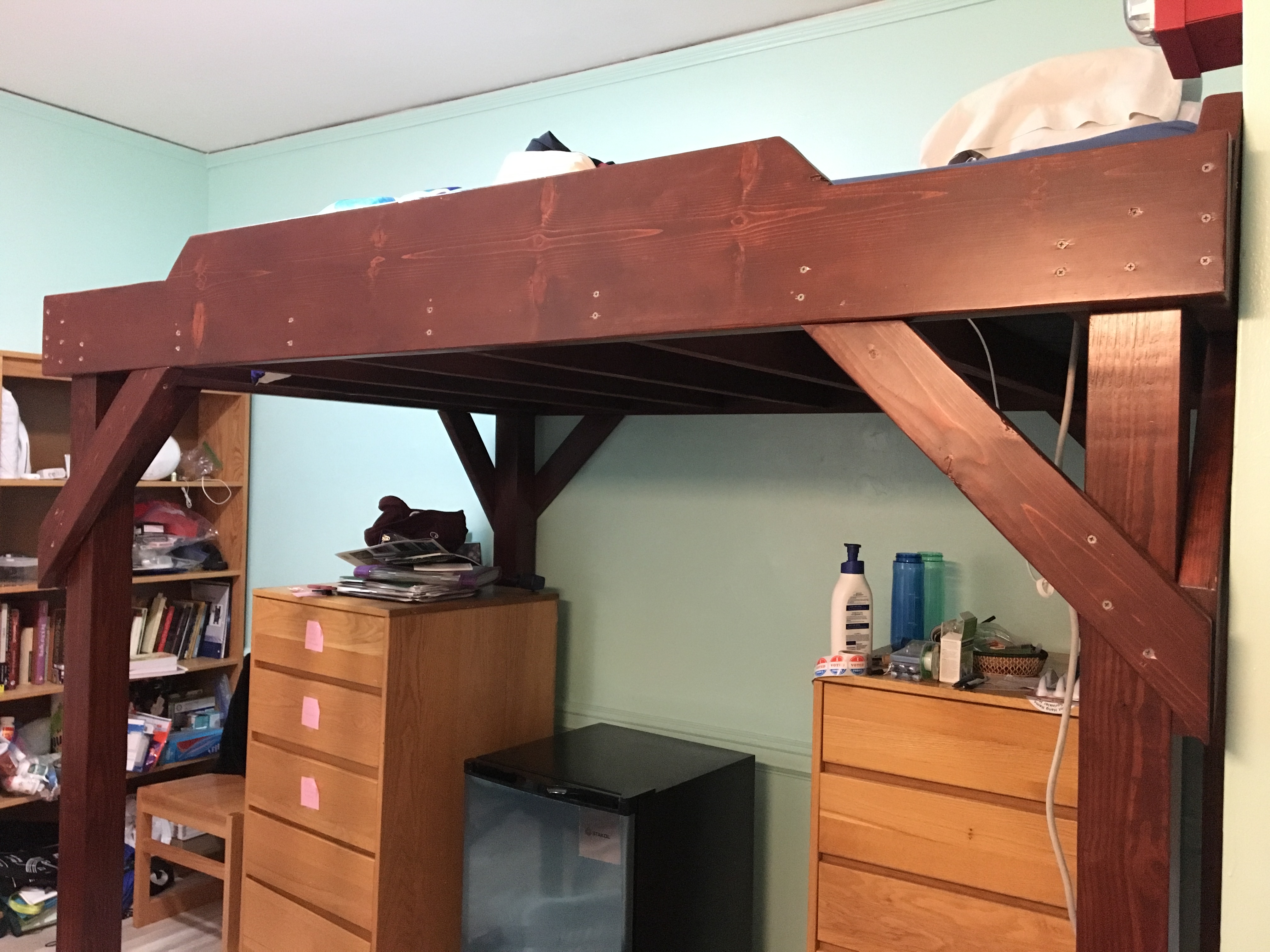 The inspiration for this loft started with a really, really old house. An inCREDIBLY COOL old house: the Gamble House, which was built in Pasadena in 1908 by Charles and Henry Greene.⁠02 Who, fun fact, got their architecture degrees from this fine institution! My parents and I were in SoCal last March Break (to visit my four-year-old twin cousins!!!!) and we heard about it through a friend. Because I am a huge architecture/woodworking/crafts nerd, I knew we had to go on a tour; I spent the whole time just f r e a k i n g  o u t about how cool it was and then immediately bought the making-of book, already dreaming about all the things I could build in their beautiful Arts & Crafts style. I still have the loft designs I scribbled on a napkin in the car on the way home.

Six months later, it turns out that, well, it’s difficult to build extremely beautiful and fancy things when you are

But all those things considered, I think I didn’t do too badly. One of the features that immediately caught my eye was how every single thing in the Gamble House is rounded (even the mf-ing bricks); there are no sharp edges. You can run your hand over every piece of the house, and it feels like a soft, smooth wooden hug. I didn’t exactly have the proper tools to pull this off (ideally, a wood router), so instead I just used an orbital sander⁠03 An electric spinning tool to which you attach a piece of sandpaper so you can sand wood faster and without getting carpal tunnel to veeeeeeery carefully sand down each individual sharp edge until it blended into a soft corner. This was… difficult. 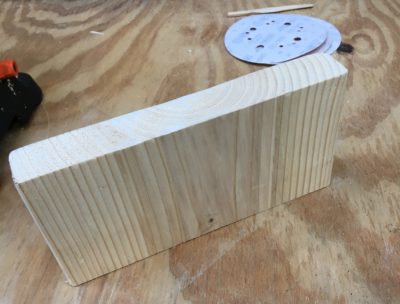 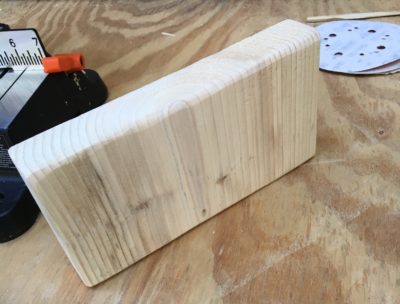 Before and after orbital sanding the edge of a piece of test wood. I liked the way the result softened the piece, but really disliked the uneven look (which I mostly managed to refine in later iterations).

Another thing I loved was the richness of the wood: everything in the Gamble House is made of very dark-coloured wood, but it shines so beautifully that looking at it immediately brings to mind the warmth of a low fire. Unfortunately, I make student money and am not in a position to just order up a pallet of beautiful teak or mahogany, nor do I have anywhere near the skill required to do those materials the justice they would deserve. So instead, I bought the cheapest dimensional lumber available at Lowe’s and then sanded, stained, and varnished the heck out of it.

Lastly, I really loved the shapes of things in the Gamble House and the way they fit together. That one particular shape you might’ve already noticed in the photos above is called a cloud lift: the Greene brothers used it everywhere, and I’m in love with the way it turns a simple object into a just very slightly whimsical and elegant design. In the car on that napkin, and later on graph paper, I drew out cloud lift lofts, over and over, trying to get it right and figure out what the relative lengths of everything had to be to make it look like the ones I had seen. And then I switched cutting tools like three times trying to figure out how to actually cut the wood that way. And then I gave up on doing the most complicated and best looking version, simplified it, and switched cutting tools again.

This all took a long. ass. time. And meanwhile, I was trying to

So… it’s been a long time. There was a week or so, after I realized that finishing “before school starts” was an illusion of the highest order, when I planned to just post before the loft was done. Except, surprise, I was spending all my available free time, energy, and mental space working on the loft!

And to be honest, it was really hard. Of course, I’d started out with lofty goals⁠04 NO PUN INTENDED I SWEAR and had had to scale down, but I hadn’t anticipated having to scale down, and down, and down. And things went wrong, because of course they do; but unlike in a class, where I can always go to office hours or ask my TA, sometimes I was just in the basement, alone, at midnight, trying to varnish the wood, getting dust in it and wiping it off over and over, feeling like I would never be able to finish successfully. (Although, thank god there was someone with me the time I accidentally spilled the wood stain everywhere, and thank you so, so much for helping me clean everything up.) It took so long to get anything done, and afterwards there was always another step, and another mistake to make that I wouldn’t see coming or be able to fix, and another night of falling into bed exhausted, having neglected everything else I was hoping to get done that day and feeling unsatisfied with the work I had accomplished.

Spoiler alert: there’s still some dust in the varnish. And I’ve made… well, I’m in the process of making my peace with that. I can tell you so many things that are wrong in the pictures of my loft: so much I should probably fix in the future, and so much that I didn’t see coming in the past and will never be able to fix now. But I’m trying to set that aside, and appreciate that I turned a pile of plain, straight, white, splintery wood into this: 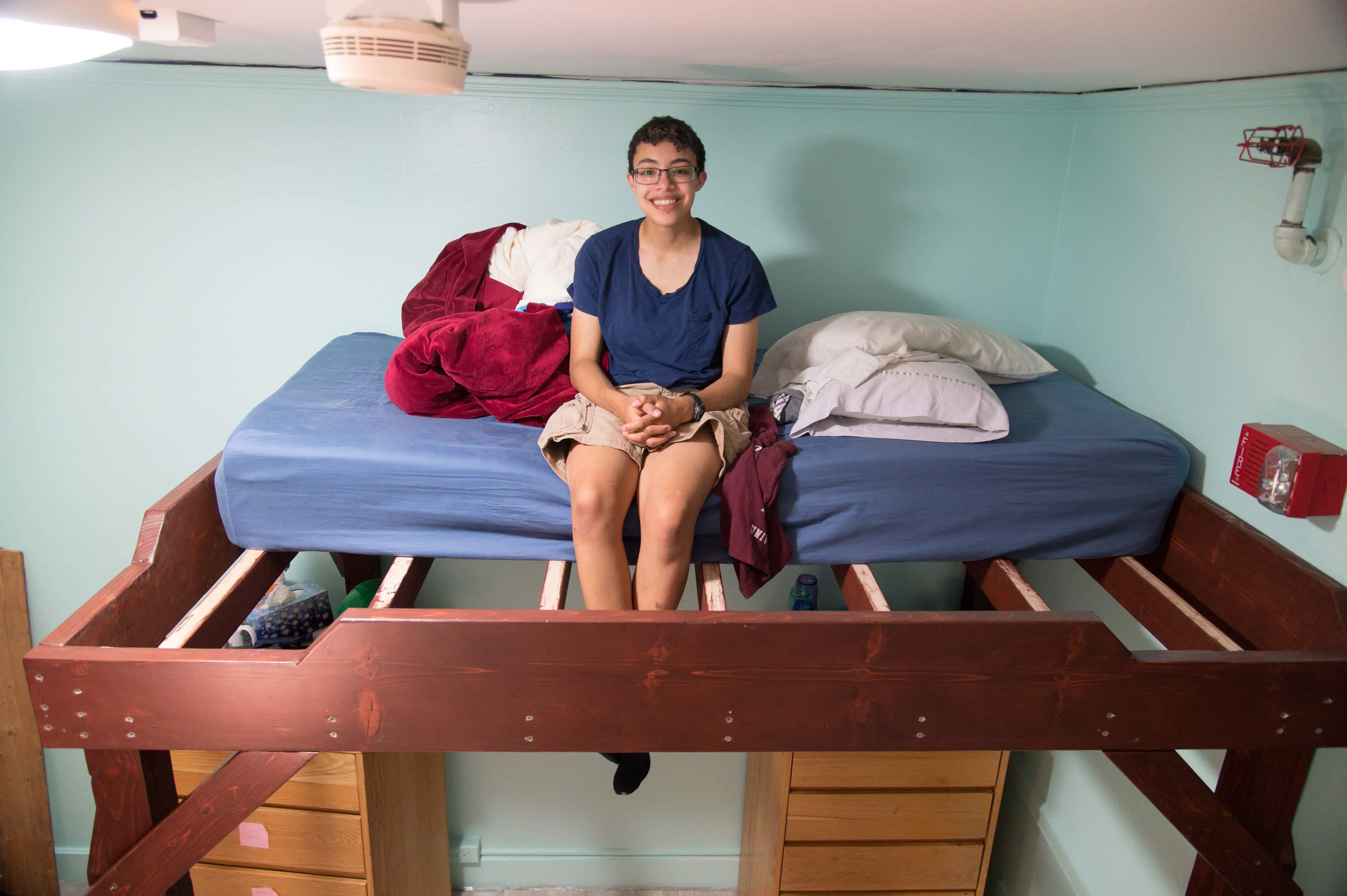 The empty space is about 18″. There’s going to be a shelf there soon! Photo credits go to Maxwell Yun ’21.

And now I can sleep easy. 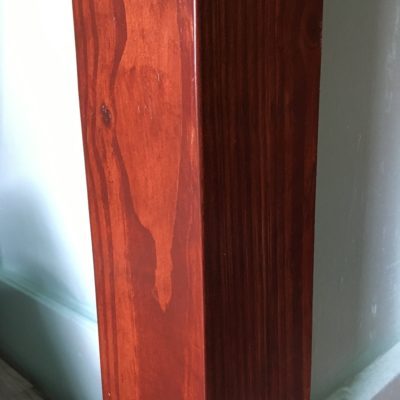