ASTRONOMERS! Learn to moonwalk. You'll need it some day.

David Helfand: “Unfortunately we don’t have time for a formal Q&A session, but I’m sure that Neil would be happy to stick around for a few minutes and answer questions if there are any.”

We swarmed to the stage while Neil walked to the edge and crouched down to shake hands with ardent fans. My friends and I shoved cameras at each other and posed: 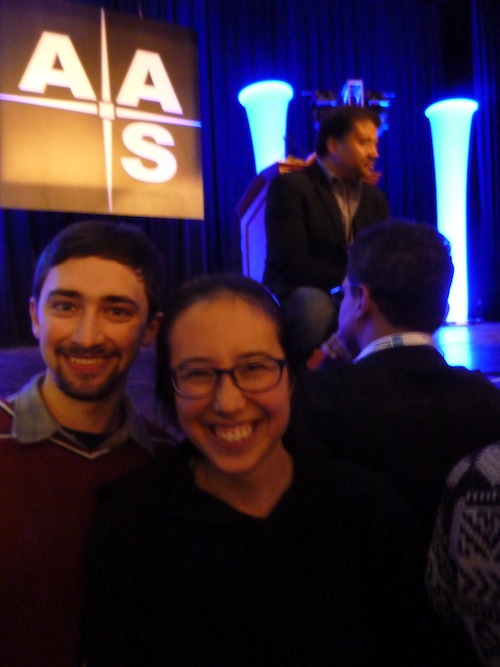 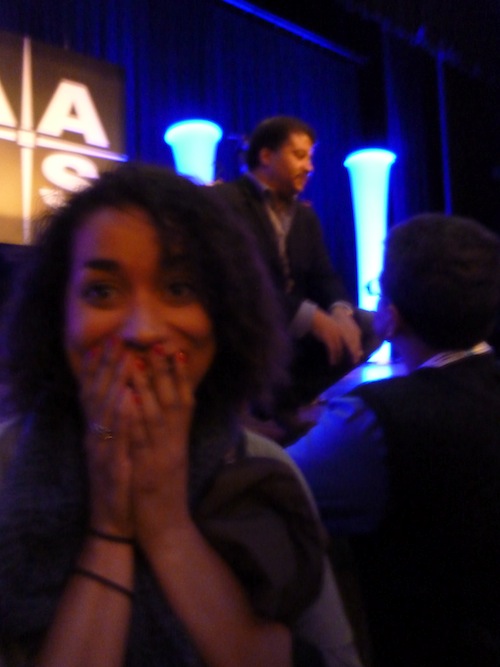 Neil looked around the crowd, and my hand went up first. He made eye contact and pointed at me: “yes! question?”

Neil deGrasse Tyson (NEIL DEGRASSE TYSON!!!): “Ah, excellent question, and one that is very near to my heart.”

Random astronomer: “Can you repeat the question? We couldn’t hear it from over here.”

Neil: “The question was, and” – he glanced at me – “let me know if I have this wrong. The question was about how outreach is valued in the professional scientific community.”

I nodded. He looked straight at me while giving his answer, and I could sense camerapeople standing all around me. My heart was pounding so loudly in my ears that I’m not sure if I heard anything he said, but here’s what I remember.

Neil: “So, Carl Sagan made some mistakes…”

Neil: “but he was the first [to do highly-visible, large-scale public outreach] so he was allowed to make mistakes. But I’m not the first, so I’ve been able to learn from his mistakes. Carl often didn’t assign credit when he described results from astronomy research. A lot of the people watching his programs thought that HE was the one making all of those discoveries. After he passed away, newspapers wrote things like ‘the only award that eluded him was the Nobel Prize!’ which they would only have said if they thought that all of the discoveries he talked about were his discoveries. This was work that other scientists might have spent decades of their lives working on — and Carl was getting all the credit. That made a lot of people resentful.

When I describe science research, I’m always careful to attribute it to the group who worked on the project. When a newspaper calls me up and asks for comments, I always direct them back to the group who did the work. And then I might make a comment that just seals a ribbon on the group’s comments.

Also, I never talk about my own research. I don’t use my platform as an opportunity to advertise my personal results. My specialty is galaxies, but almost nobody knows that. I talk about whatever I think would captivate the public the most, and I call up colleagues if I don’t know much about it.

I’ve never felt any antagonism from the professional astronomy community, and I think that that’s because I always give them credit for their work.”

At this point, it was nearly 10 pm. My friends and I had arrived at 7:30 (with our Mexican take-out food in hand) to claim second-row seats, which turned out to be a fabulous idea because the auditorium filled up. In the AAS meeting schedule, the event was advertised as the following:

Tales from the Twitterverse, and Other Media Excursions

The public’s access to our field has historically occurred through traditional conduits of communication such as television documentaries, planetarium shows, and media reports. But in the past five years social media has arisen as a means of attracting people who would never have imagined they had an interest in the universe, or in science at all. The results are stunning and unexpected, with millions of people responding to various offerings of the universe made in these media. Twitter and Facebook lead the way, but other Internet social media have proven potent as well, including YouTube, Reddit, Google+, and, more broadly, the blogosphere. We give first-hand stories and accounts of forays on this landscape and offer suggestions on how such efforts may benefit the long-term health of modern astrophysics from having cultivated public support at its deepest levels.

Defending this thesis involved a discussion of memes (you know that you’ve really made it when you’re a meme!) and I can report that it is truly bizarre to watch Neil deGrasse Tyson present memes of himself. Like this one: 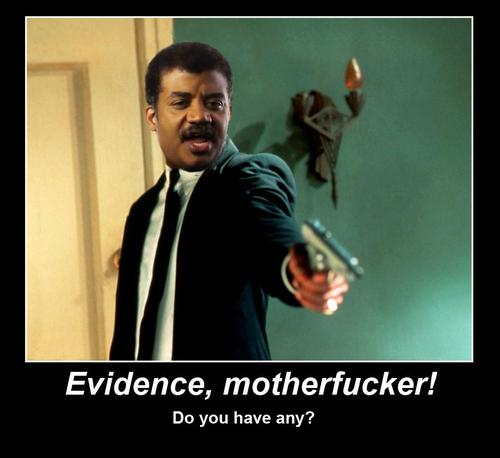 Apparently he does pay attention to the memes people make of him, so I encourage you to go out and be creative — and maybe your artwork will feature in his next presentation about social media. :)

He also told us about the time he did a few calculations to “find” Superman’s home planet within the exoplanet catalogue, and ended up in a comic: 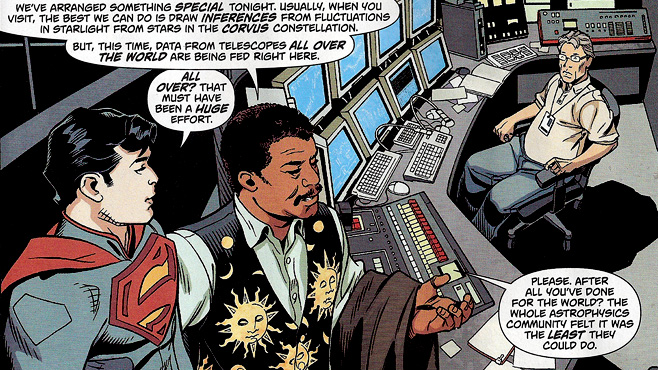 If you have sharp eyes, you’ll notice that he was wearing this vest on stage.

He also talked about Facebook. If you have a Facebook page, you’ve heard of the page “I Fucking Love Science.” IFLS has just under nine and a half MILLION Likes, and originates from Neil Tyson’s stint on the Daily Show.

He explained that, before getting on the show, he spent a lot of time studying Jon Stewart’s verbal habits. He paid attention to how many sentences Stewart usually grants a guest on his show before inserting a witty comment. He paid attention to what kinds of words or phrases Stewart particularly likes to pick up on. So, when he went on the show, he made sure to describe astronomy using sexually suggestive language, which prompted Stewart to say “WHY IS IT THAT WHEN YOU TALK ABOUT SCIENCE YOU TURN ME ON?” and then, “I FUCKING LOVE SCIENCE.”

Neil has a busy schedule, and after I asked my question one of his AMNH colleagues got up on stage and began dragging him off of it. As he was leaving, another member of the audience asked what he thinks the US role is in influencing international science policy, and in between steps he shouted something about how he wouldn’t claim that we have enough of an understanding of other cultures. His colleague tugged even harder on his arm, and Neil moonwalked off the stage to shrieks and applause. “ASTRONOMERS!” he yelled. “LEARN TO MOONWALK! YOU’LL NEED IT SOME DAY!”

He didn’t make it to the door, because so many people swarmed around him holding out their scientific poster labels and official conference badges for him to sign. It was the scientist equivalent of a rock concert.

My friends and I let him go, though, and we all went back up to our rooms to post pictures of the event on Facebook. With all that discussion of social media, it seemed like the appropriate thing to do.