our most remarkable feat of engineering since...mit

In the week following our last few days on campus due to the COVID-19 outbreak, a group of MIT students came together to build a 1:1 scale replica of MIT in the game Minecraft. And given how dedicated, ambitious, and creative MIT students are, it’s no surprise that the effort was a massive success. In a span of a few weeks, a group of around 300 people spent over a month’s worth of hours helping create MIT campus. Now, over 400 unique members of the MIT community, from prefrosh to grad students, are helping contribute to the initiative.

My peers continually amaze me, but this project had me SHOOK. I got Minecraft a week ago and had never played it before in my life or even held the slightest bit of interest in it, but now that I’ve seen how impactful it is, I’m hooked.

When I first logged into the MIT server, I was completely awestruck. I took in the steps leading to Lobby 7 that I had climbed every day to attend class, marveling at how realistic they seemed, before turning to cross Mass Ave. I headed toward the Student Center and veered left to approach the park where Bexley once stood; I had spent a blissful, sunny day there right before we were all informed that we had to leave campus. Seeing everything preserved so accurately was overwhelming, to say the least.

Being able to feel immersed in the campus I know and love from my own computer is quite the feat, and I’m so proud of my peers for what they’ve accomplished. Minecraft might be just a game, but it’s enabled a group of individuals to bring MIT to life.

The Project So Far

Ideas about virtual!MIT started in the Busy Beavers Discord server⁠01 our campus-wide Discord server that aims to facilitate social interaction while we're away from campus shortly after everyone returned home from campus. After Jeffery Yu ’22 set up a small server on his home computer and someone made a base plot for the map, the project took off with full force.

Eventually, SIPB⁠02 Student Information Processing Board Chair William Moses ’18 found out about the initiative and offered a server to host everything, as well as some individuals to help with running it. From there, lots of MIT students started joining and building things both Minecraft and server-related. A lot of maintenance is required for something of such a huge scale, so the ways in which people can participate in the project are varied. Moses has built a few things within the game but mostly focuses on server development: automated backups, dynamic maps, teaching people how to do things like adding permissions and creating tools, and task delegation. Now, there are significant numbers of people who are helping with expanding and maintaining the server on both the internal and public-facing sides.

So far, a remarkable number of buildings and areas, including Lobby 7, Lobby 10, Maseeh, McCormick, the Green Building, the Z Center, and even the Banana Lounge, are either complete or close to being completed. This is really impressive considering how huge the undertaking is—given how limited the materials Minecraft gives you are, the amount of detail that’s been put into some of the buildings is incredible. It takes a lot of creativity to replicate certain designs and bring complex structures to life.

Check everything out here, and read the MIT News article about it here!

The server, aside from being an amazing and fun endeavor, also has a lot of prospective uses for the broader MIT community. Besides being a place for students to hang out, reminisce, and feel closer to home, there are opportunities for games⁠03 capture the flag!! and virtual events to be held on the server. Indeed, once the map is complete, there are plans to clone it to the survival mode⁠04 the original server was created in creative mode, aka you just build things; there are no monsters and you don't have to look for resources to stay alive. survival mode, on the other hand... server and play games across campus with it. Also, the MIT Alumni Association has reached out about having “virtual tours” at Minecraft MIT, and students can give tours to prefrosh through the server as well.

Since Minecraft MIT is essentially a 3D model of MIT, there’s a lot of opportunity for exploration. Shayna Ahteck ’23 remarked that they might want to figure out new ways to get to places. I’m also pretty excited to see all the places I never got a chance to visit while on campus :)

Larger events like CPW and commencement are a possibility as well! Of course, the opportunities virtual MIT offers are wonderful, but it’s important to acknowledge that these can’t serve as “official” replacements for these activities and that the impact that COVID-19 had on students’ ability to partake in them is tremendous. Nevertheless, the Minecraft server is always available to help support students and remind them of what shaped their MIT experience.

A lot of progress has been made, but there’s still quite a bit left to create in the server—after finishing all the buildings, participants are eager to expand the project and are looking into combining the MIT map with those of other Boston-area college campuses. Since campuses are pretty close by, we could make one huge Boston-area-colleges map!

Some people are also thinking of building small spots they regularly visit around campus, such as Flour, and then proceeding to create the rest of Cambridge and Boston.

There’s also the potential of contributing to the very ambitious 1:1 Minecraft “Build The Earth” initiative. This project was started by a player who used data from Google Earth to generate Minecraft terrain on a 1:1 scale. Tens of thousands of players have taken advantage of quarantine to contribute to the project!

On a smaller scale, participants are planning on recreating building interiors at a comfortable scale (at a 1:1 scale, blocks are around a meter long, but walls aren’t typically one meter wide). This would help make digital dorm and floor tours more accessible.

Thomas Murphy ’19 remarked that he’d like to use a GoPro to scan every floor of every building so he can add as much detail to the Minecraft versions as possible. “There are so many things I’m building where I don’t remember what the real one looks like and all I have is sketchy memories,” he says. “I’ve been in these rooms hundreds of times, but I can never remember.” Given, it is pretty difficult to know where a room’s blackboards are, or if it has single or double doors, when you weren’t focusing on such details while taking classes. Murphy remarked that access to MIT building floorplans and Google Maps/StreetView has definitely helped expedite the building process.

A lot of participants want to add easter eggs ⁠05 secret features/hidden stuff in the server. MIT is known for its hacking culture, so this comes as no surprise; we’re always looking for new areas and structures on campus, so hidden features in the Minecraft server would be a lot of fun for curious students. Some people already added a police car on top of the virtual Great Dome! 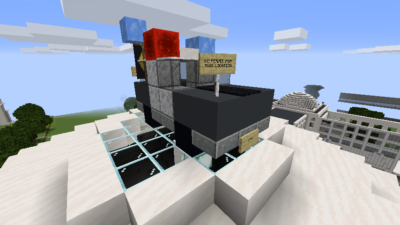 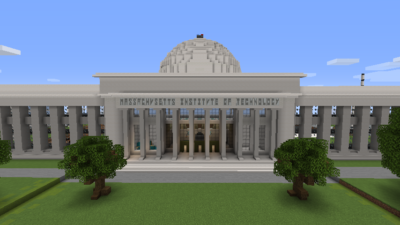 The opportunities to expand this project are endless. From tunnels to elevators to landscapes, students are intent on rendering as much detail to the virtual campus as possible, and I have no doubt that this all will continue even in fall!

How You Can Get Involved

As of now, the server is restricted to the MIT community and prefrosh, but a read-only version for the public is coming soon! Check out http://icecream-machine.mit.edu/ for more information on the project and a live map of the server, and email the moderator team at [email protected] if you’d like to connect, be involved, or get permissions.

Minecraft MIT is really, really amazing. Being able to walk around campus and see the places that are important to you means a lot, especially when you can do that alongside your friends. If anything, virtual MIT is a wonderful archive of many students’ MIT experience, and I’m so excited about all the possibilities for expansion it brings. Stay tuned to find out how it grows from here!

Update: Someone started building my floor in Burton-Conner and I’m beyond happy!! Who knew that arranging some virtual blocks in the right way could bring so much joy :’) 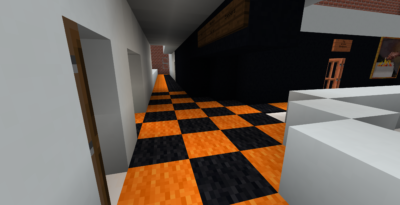 i missed those orange and black tiles SO much