If you are under the age of 25 (and maybe also if you are over it), you have undoubtedly seen endless bingo memes on people’s instagram/facebook/snapchat stories. For the uninitiated, you will quickly pick up on how it works as you scroll through this post. Personally, I just think that these are super fun and hilarious — and at the very least, you have to admit that they are WAY better than drawings of fruit.⁠01 This was the previous instagram meme, if you don't know.

So, I hereby present: MIT bingo two ways, as done by the MIT admissions bloggers! The comments below each bingo are from that blogger. Peruse at your leisure ^-^ 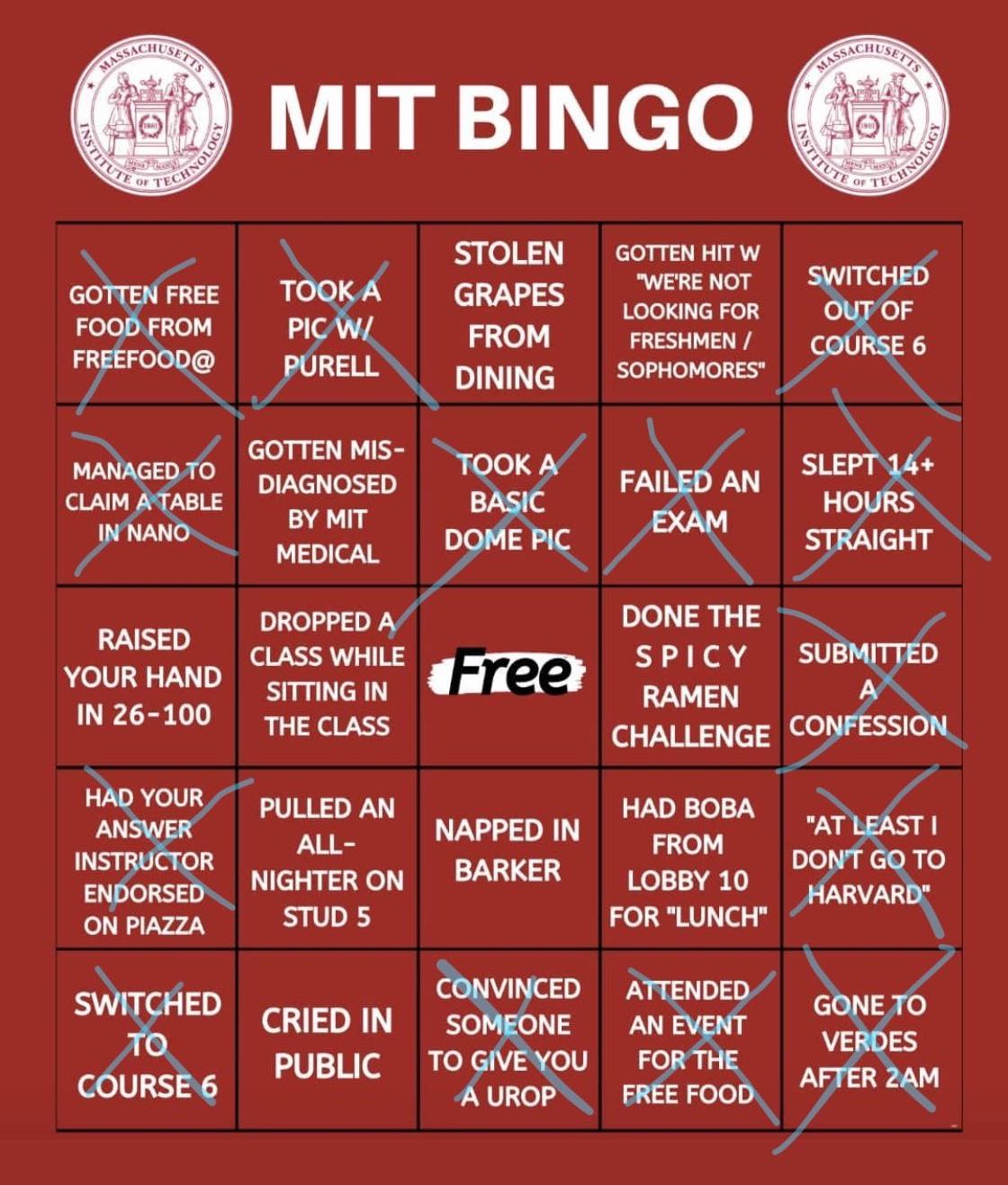 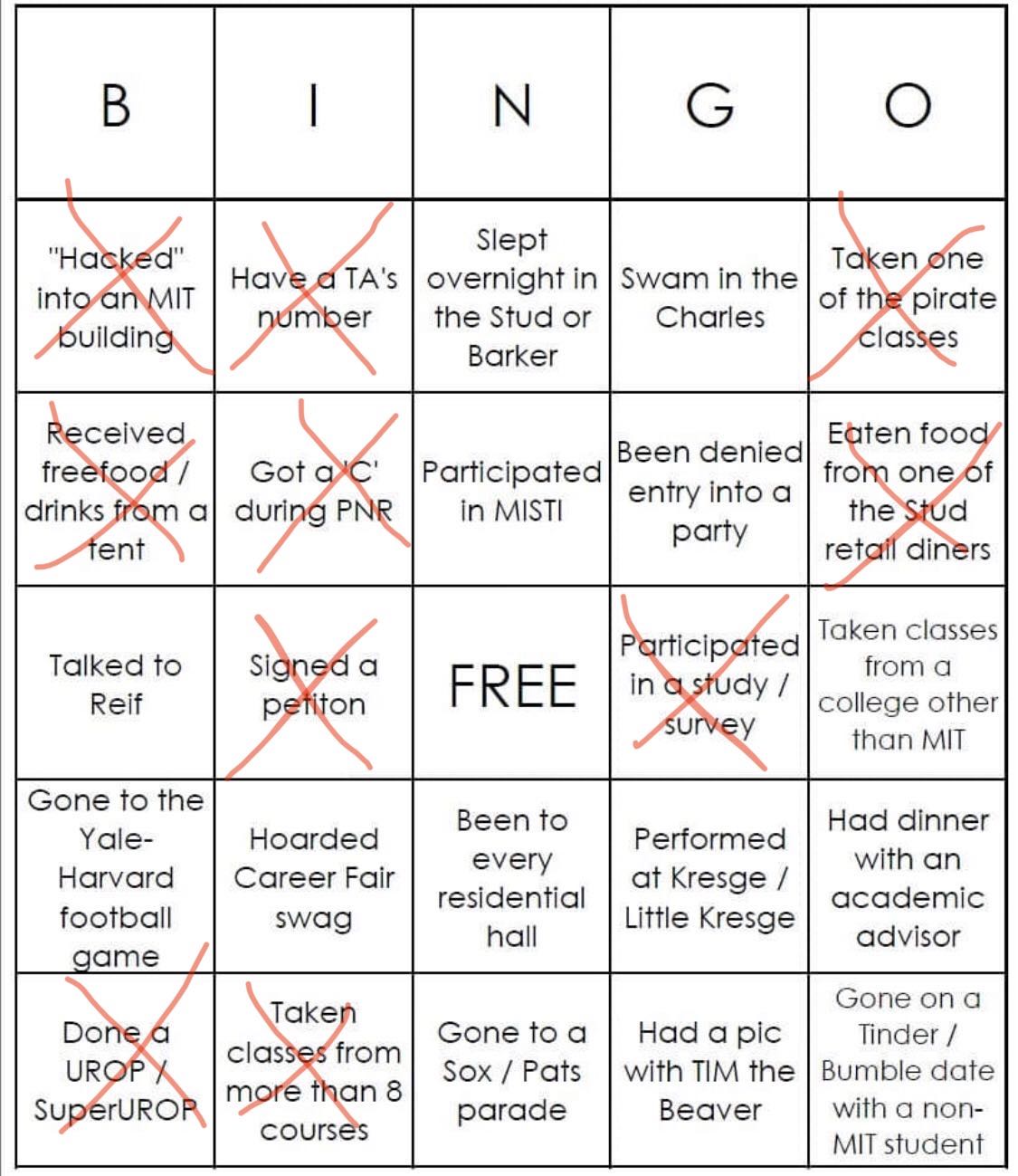 “been to verdes after 2 am”: I had a radio show from 1-2 in the morning my freshman fall and would often stop at verdes to shop in a completely silent store.
“failed an exam”: I got a 12 on a 5.12 exam even after tutoring. 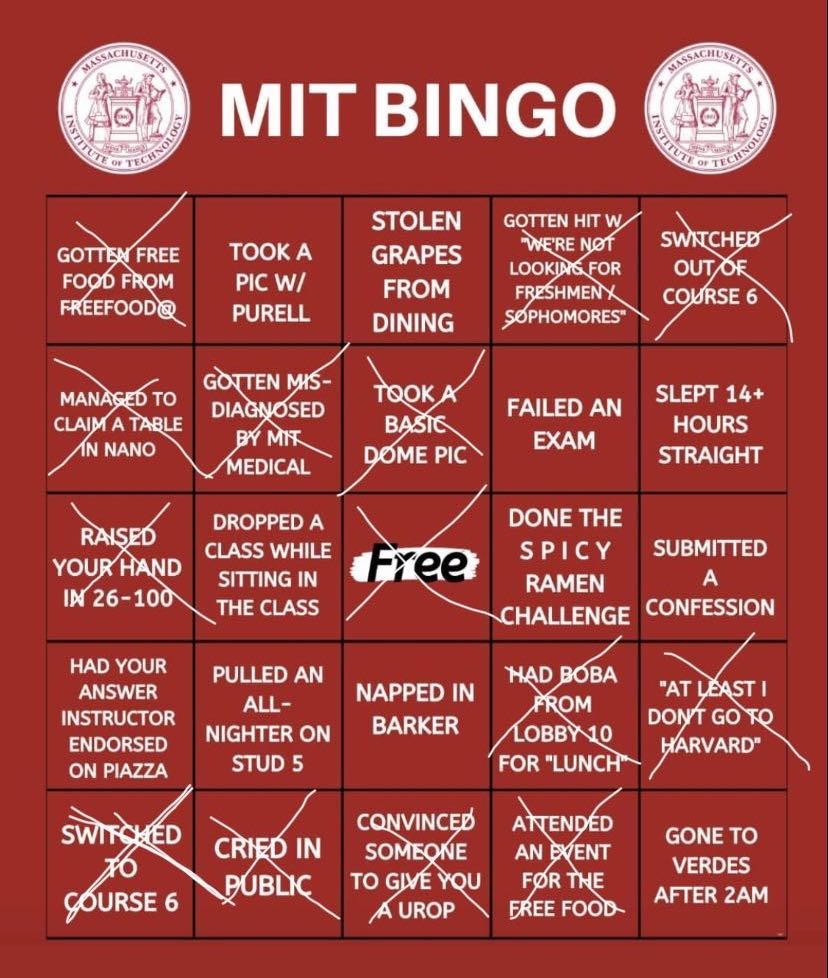 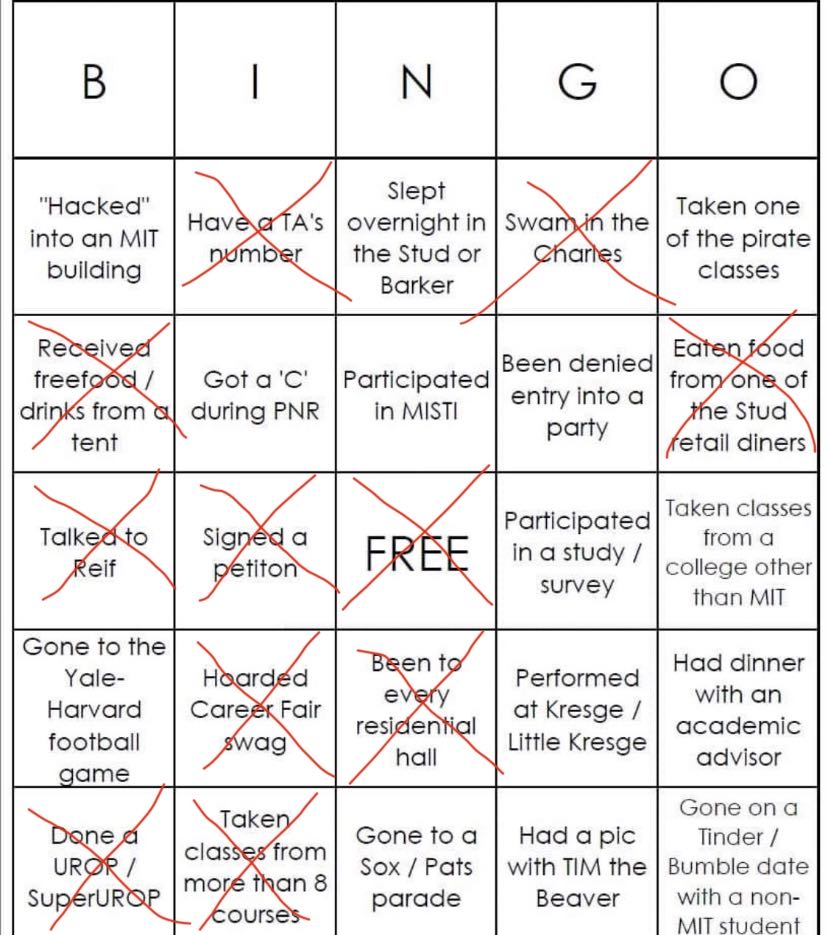 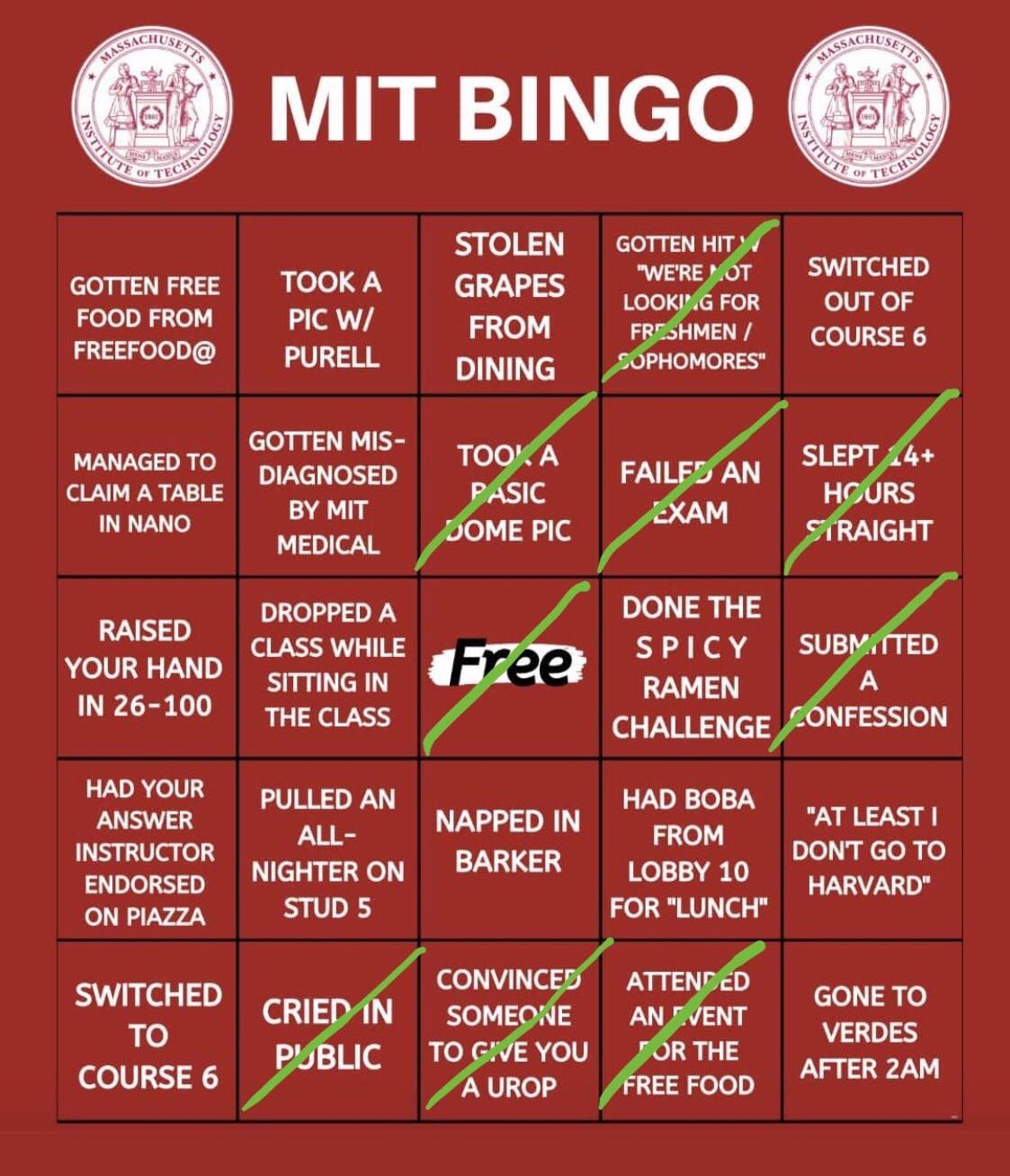 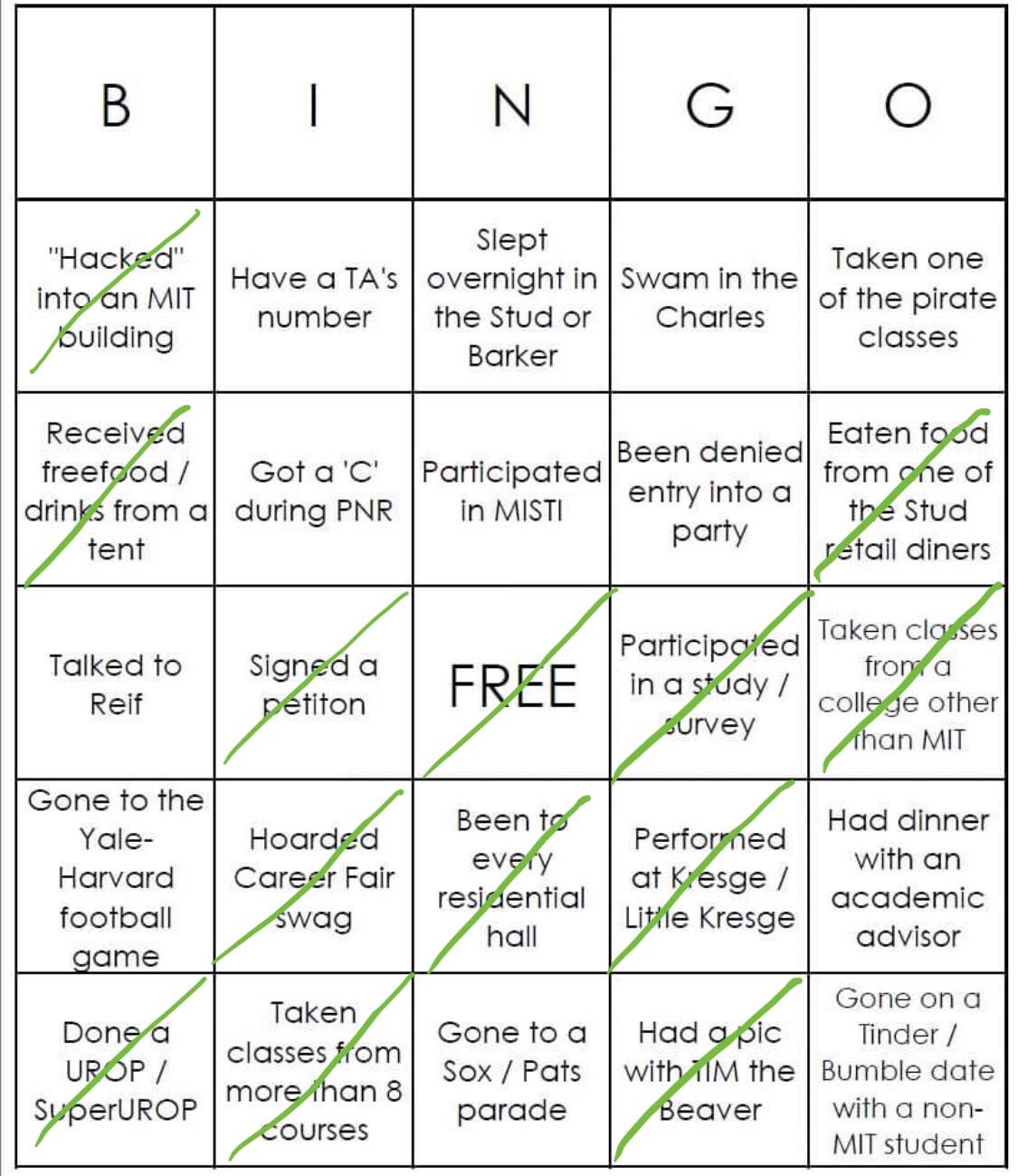 -I got a literal 5% on 6.009’s 2nd exam
-An AMAZING TA stayed almost 2 hours extra after office hours ended to help me finish one of my 6.009 labs, so I submitted a confession in mostly cap lock to thank him
-I loved cross registering at MassArt twice in sophomore year!
-The one time I “performed” at Kresge was when I, along with the rest of RingComm, presented our designs for the 2020 brass rat! It was deafeningly loud and something was wrong with our microphones so literally no one heard us lol 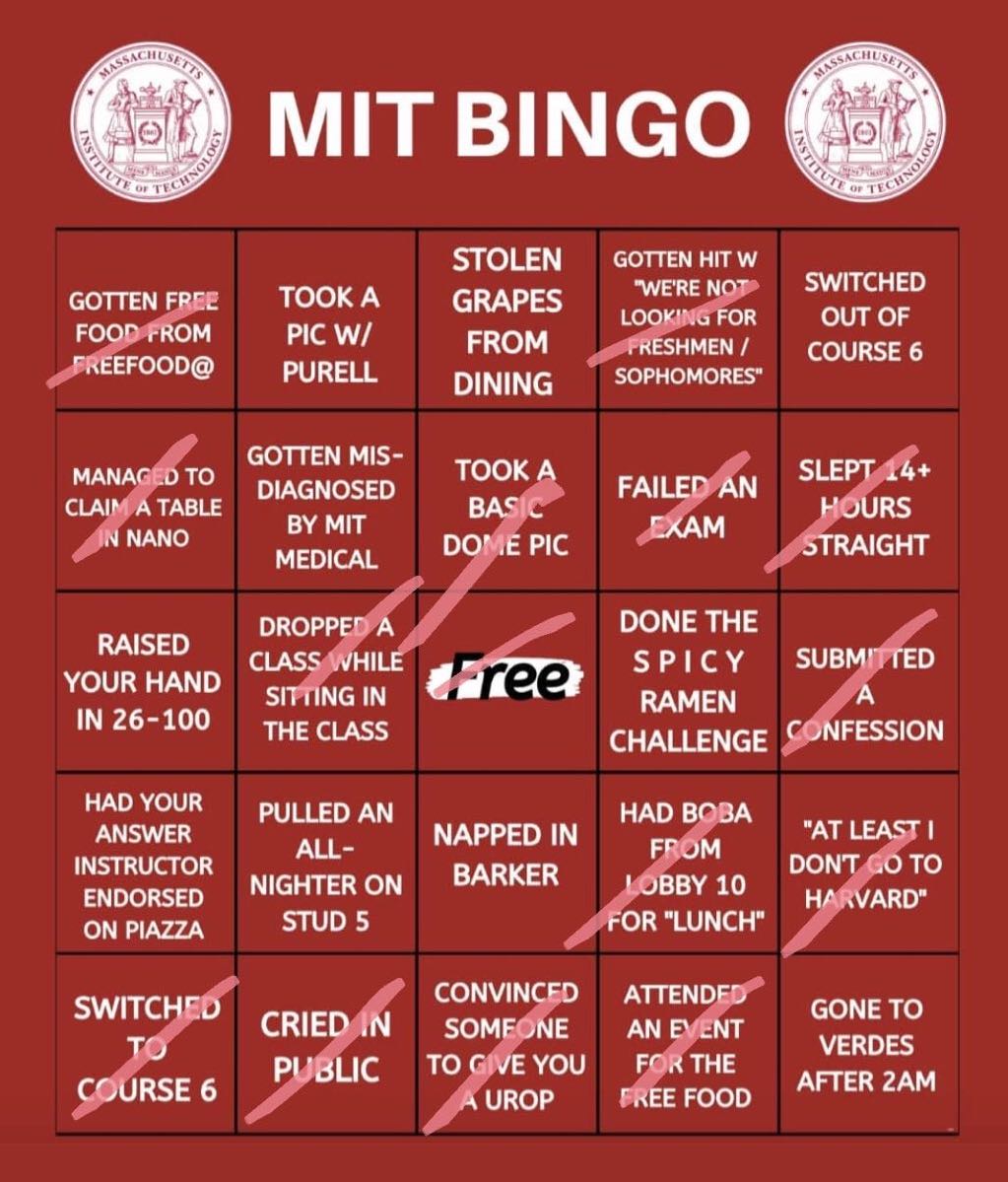 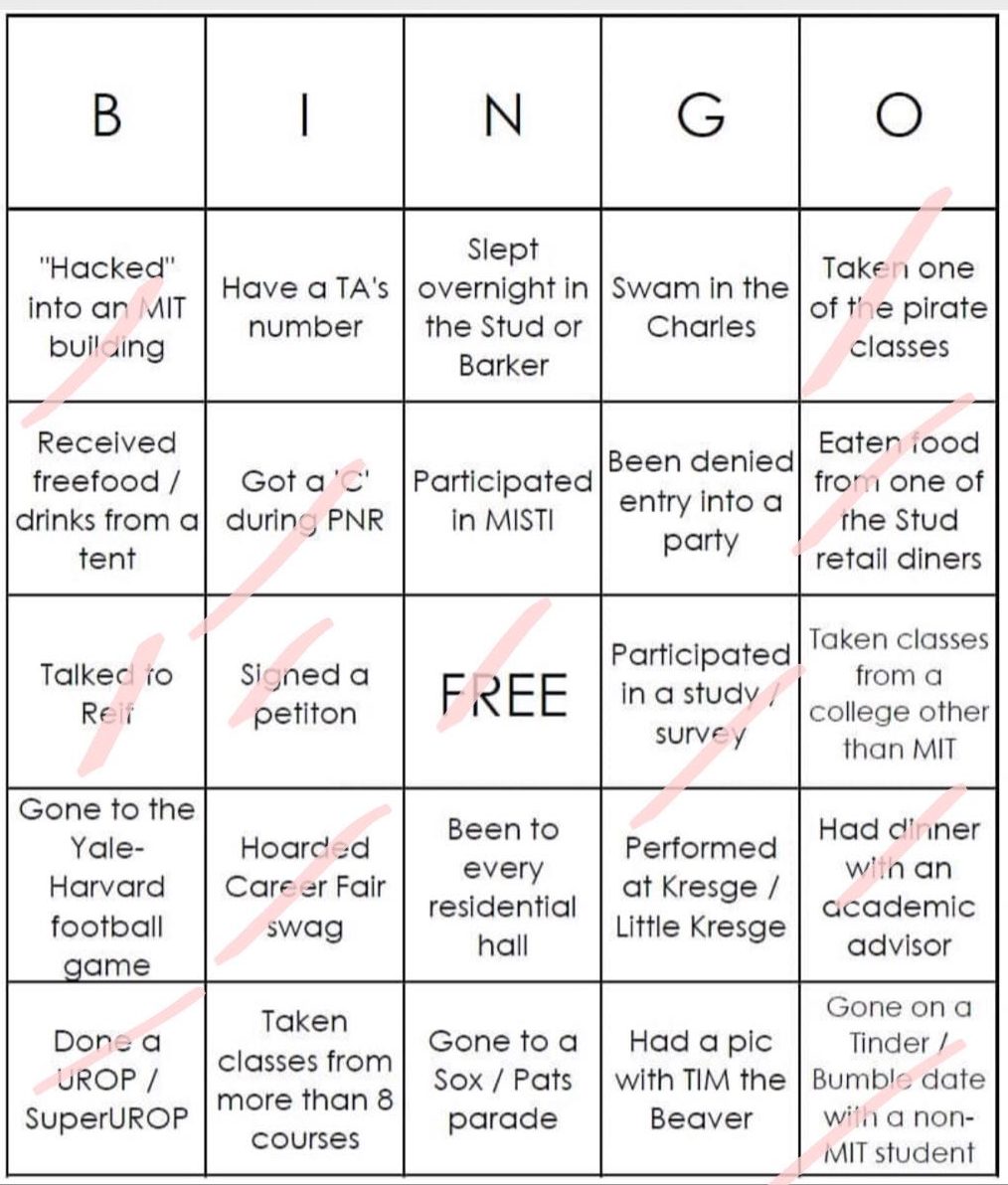 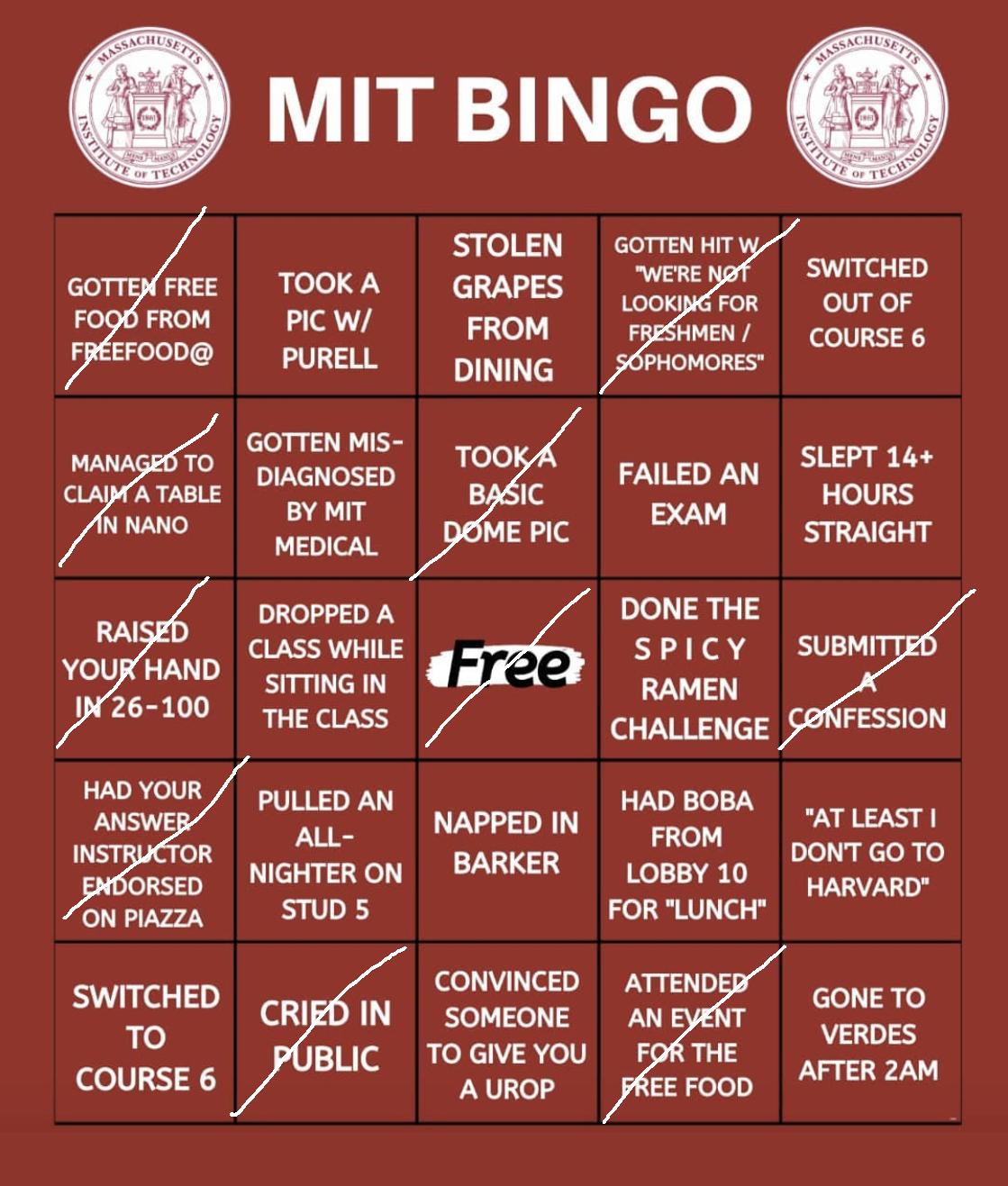 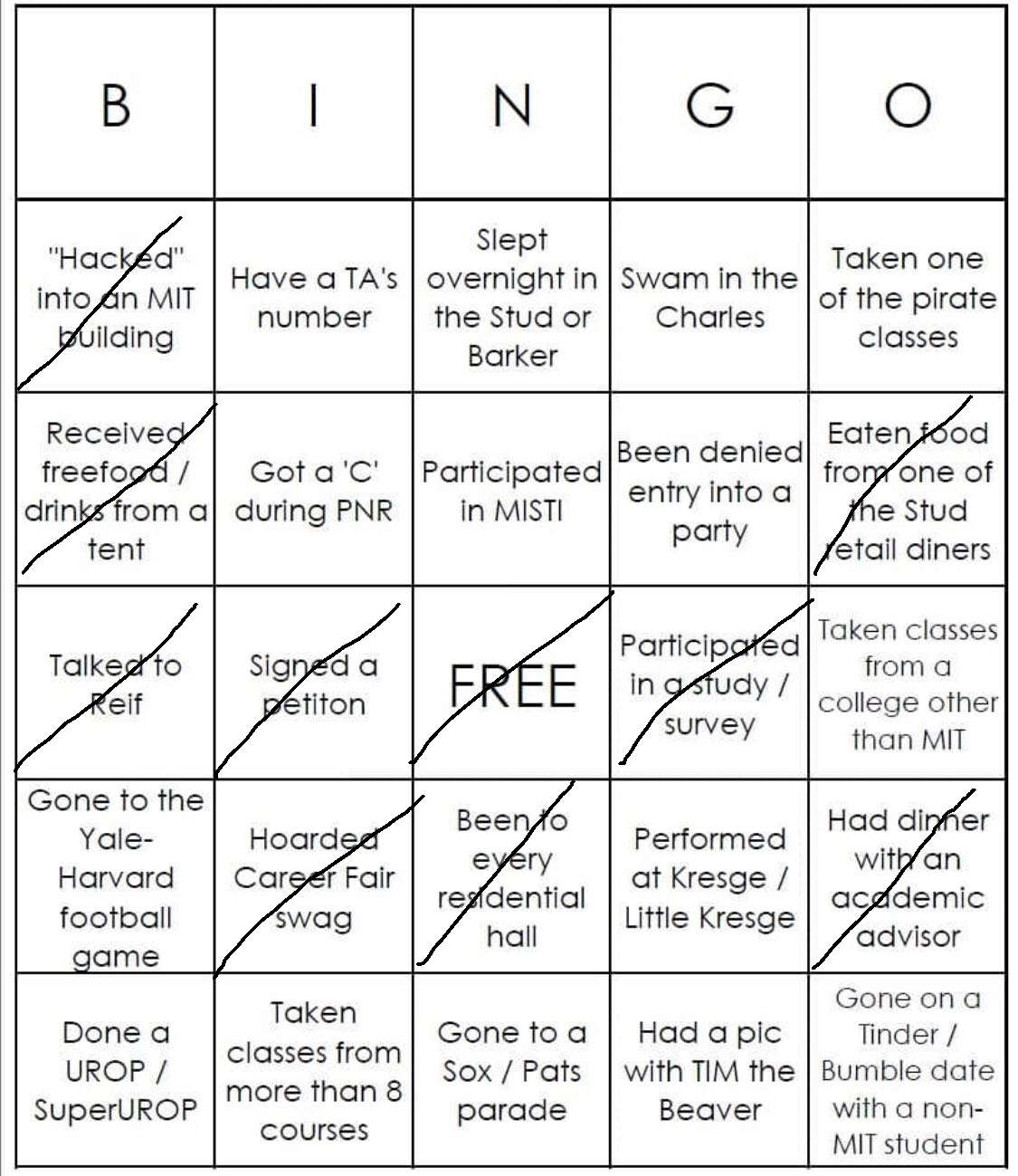 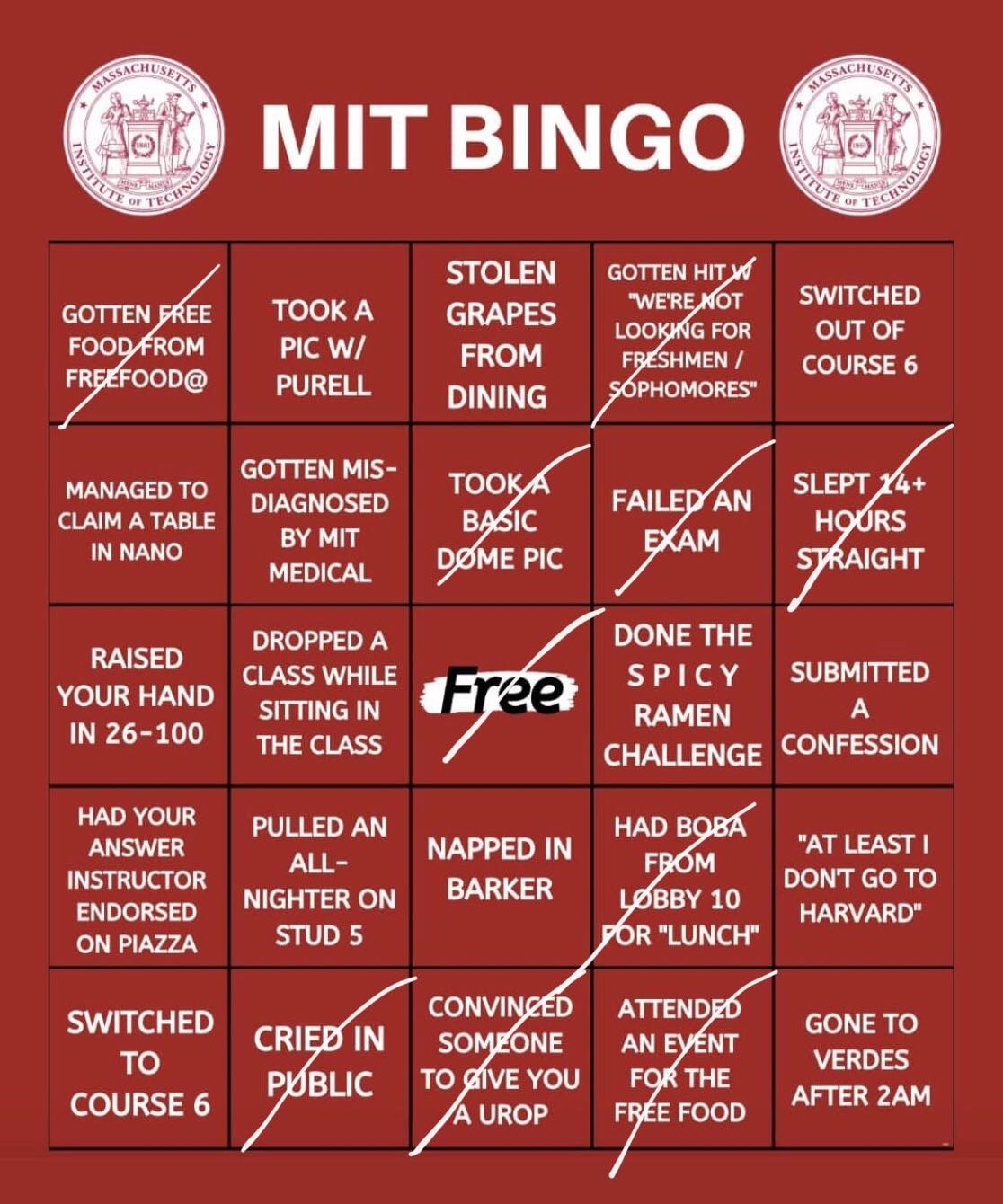 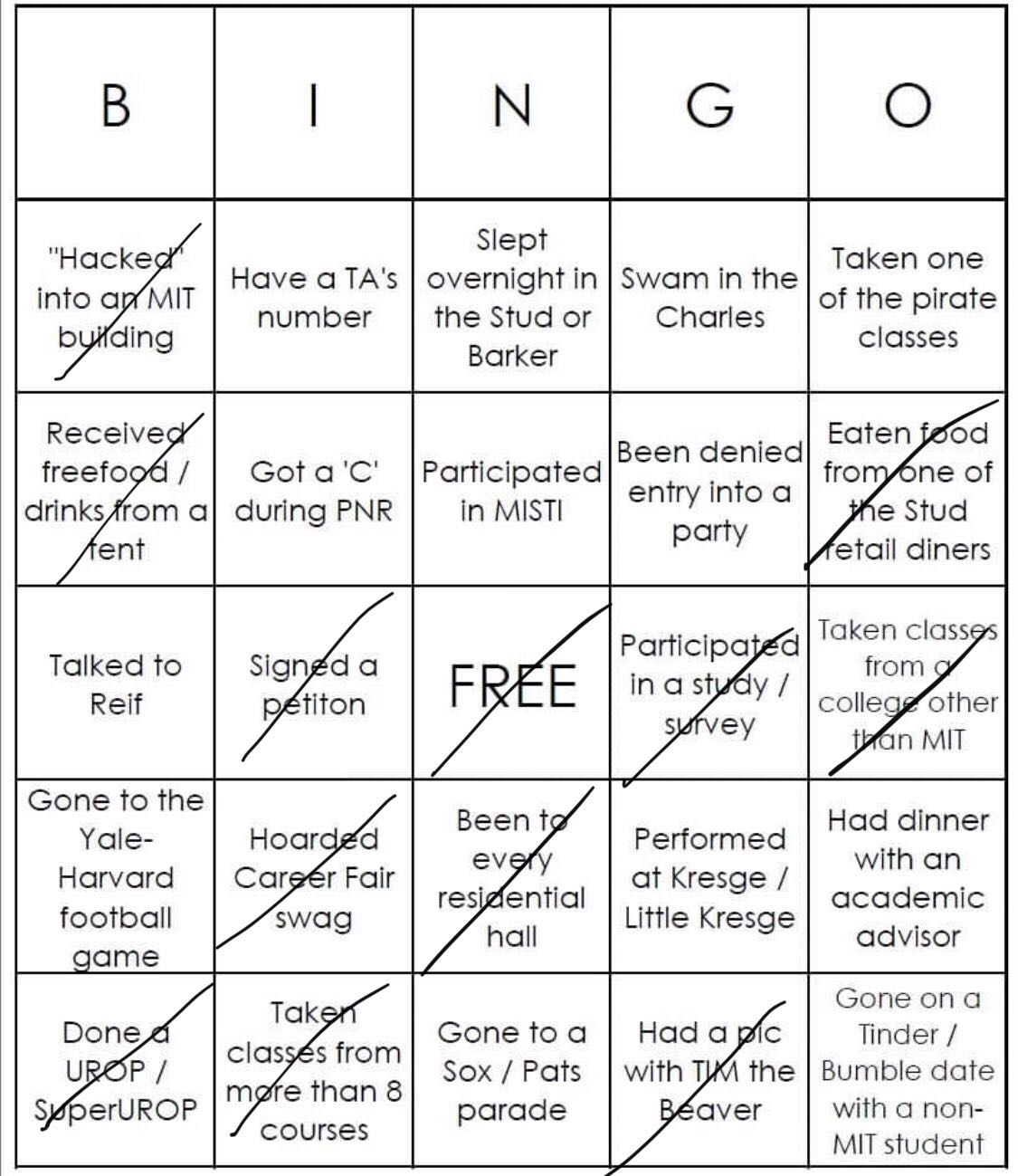 “Cried in public”: In freshman spring I was in 2.00b and one morning nothing went according to plan. I needed to bring back a heavy box of supplies I had taken back to my dorm to work on the project over the weekend, and also get an extra part from a hardware store before class started. It was getting close to the playsentations, so getting to class on time with the supplies was really important because my team wouldn’t be able to continue working on the project otherwise, and getting the new part was also really important because it was blocking progress on an important component on our project and I told my team I would get it. That morning, I accidentally overslept, but realized I still had a chance to get everything done if I caught the shuttle. I ran outside in the pouring rain without an umbrella carrying my box, tried to catch the shuttle at Next, missed it by a few seconds, tried to run to the next stop at Simmons, missed it by a few seconds again, and then kinda just collapsed out of exhaustion from the running/heavy box carrying, which made some of the not water-proof supplies fall out of the box. At that point I realized I might have just ruined some of electronics from our project, wouldn’t have time to get the new part, and would probably be late to class, which would mean my team would have to waste some of our precious scheduled group time with the instructors at a really crucial part of the semester. And that’s when I just started crying on the wet pavement in the rain, as I tried to catch my breath, collect the things that fell out of the box, and cover the box with a tote bag I lucky had in my book bag. But in the end, we got our project working in time for the presentation, so it all worked out! 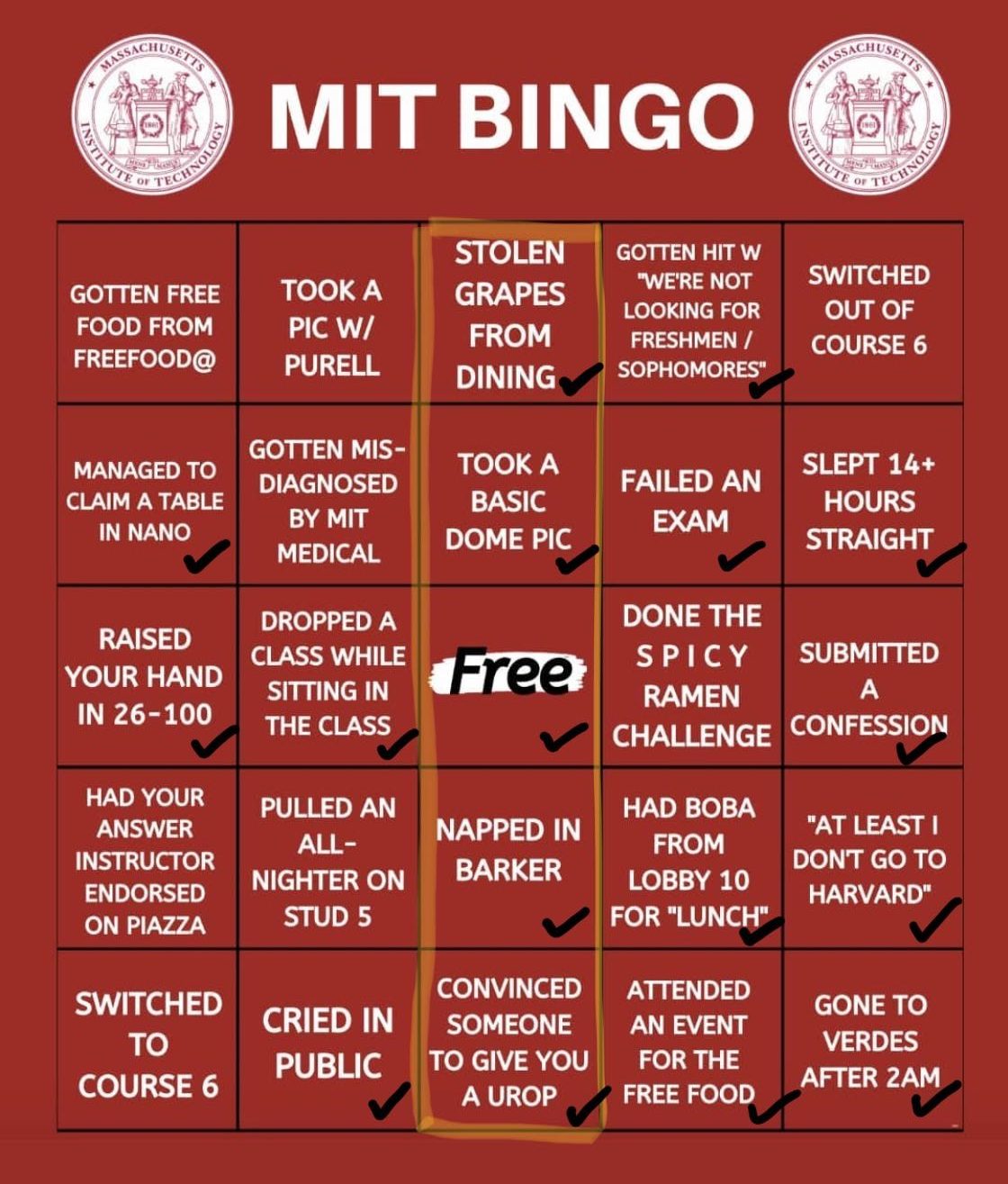 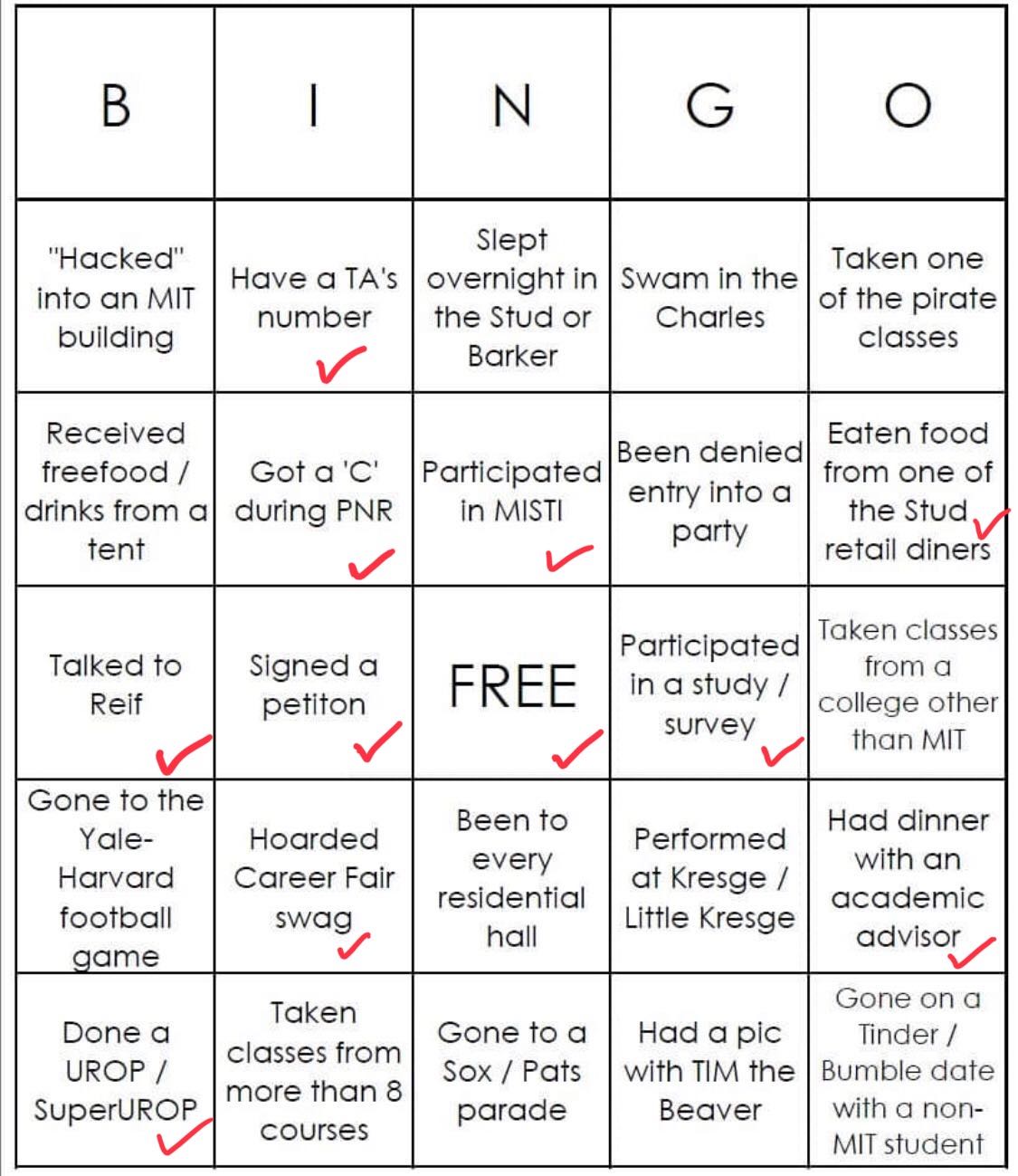 After several recruiters politely told me that they were looking for sophomores and upperclassmen, I said screw it and turned all my attention to getting as much free stuff as possible to get at least something out of my first career fair. I would pretend to be reading a form, grab my desired item from the desk, and walk away as fast as I could while avoiding eye contact. In the best case scenario, all of the recruiters would be occupied, so I could take all the merch my heart desired. Towards the end, I was holding so many bags that it was difficult to make my way past the lines of people. In hindsight, it was honestly just embarrassing to see the amount of things I shamelessly collected. I had so many stickers, socks, water bottles, notebook, pens, glasses. Heck I think I had more than 40 shirts. No one needs 40 shirts. Ever. And all of that stuff needed space. Most of it just got donated or thrown away. I never thought I would get to a stage where I would think twice before saying yes to free stuff but here I am. I’ve learnt my lesson. 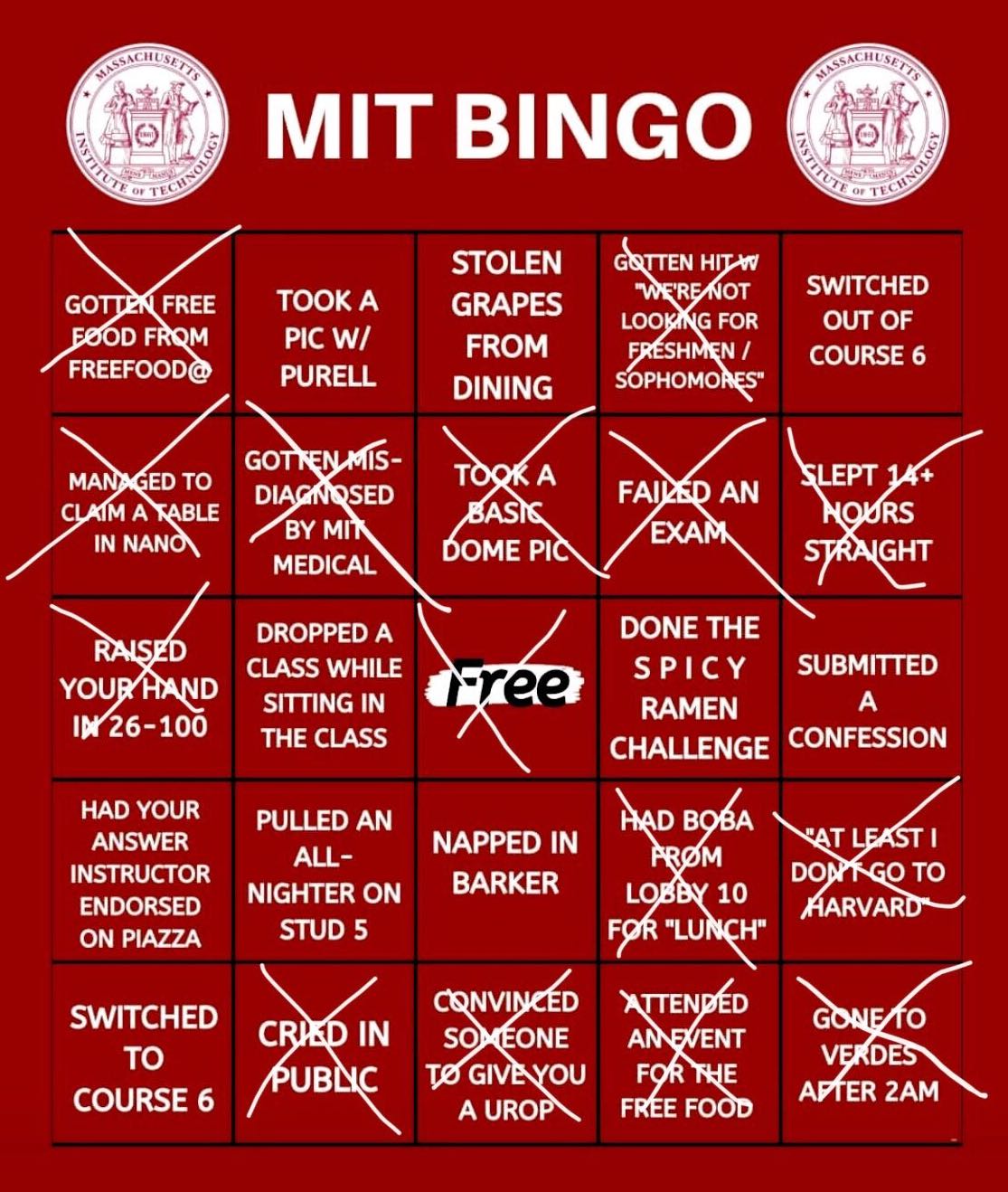 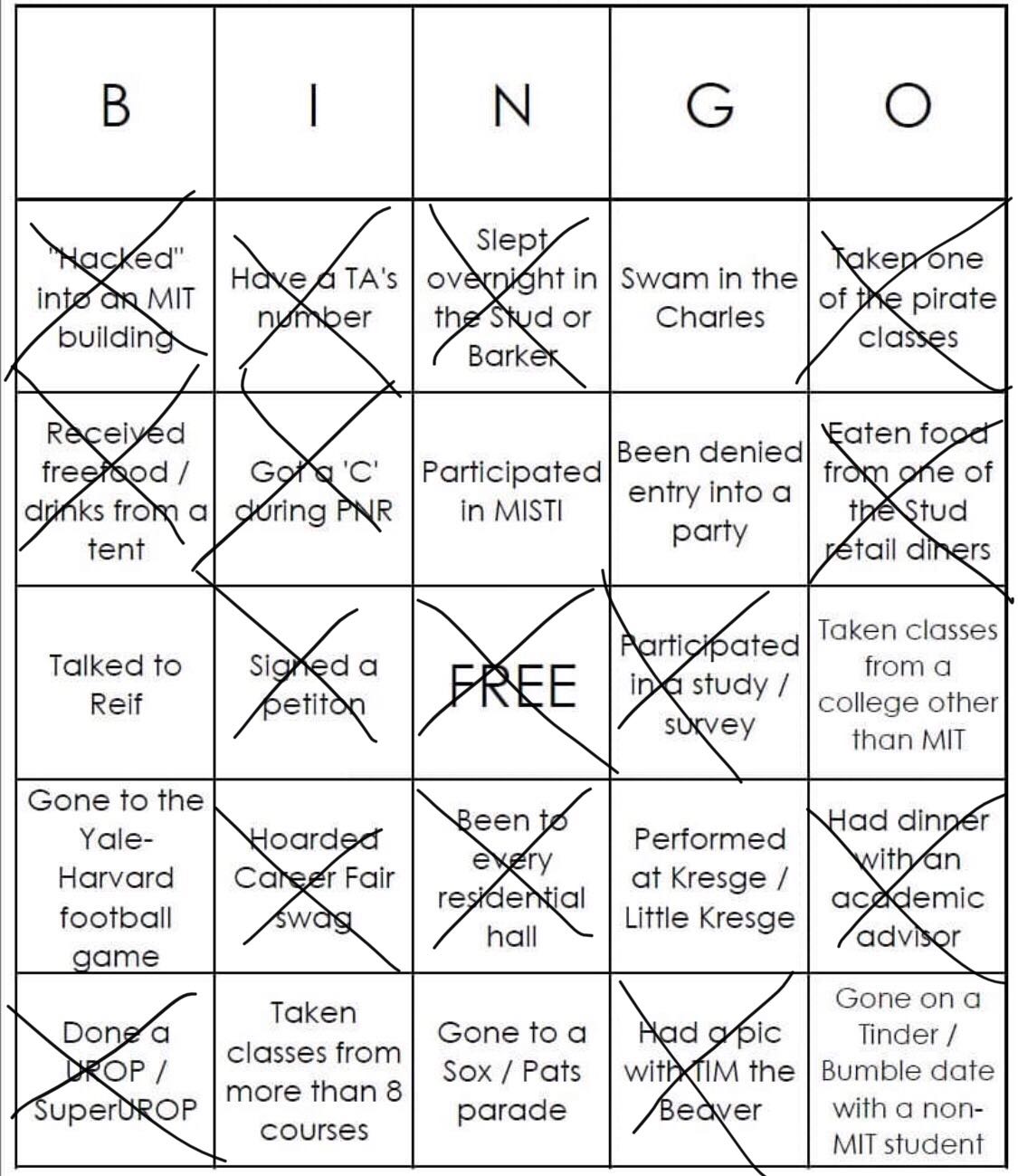 I MISS TENT PARTIES. I only got to go to one, but it was such a fucking wild night. Literally all of MIT was out in the tents getting absolutely schwasted together, and there was amazing food, and pretty hype music, and it was just overall such a fucking great time. 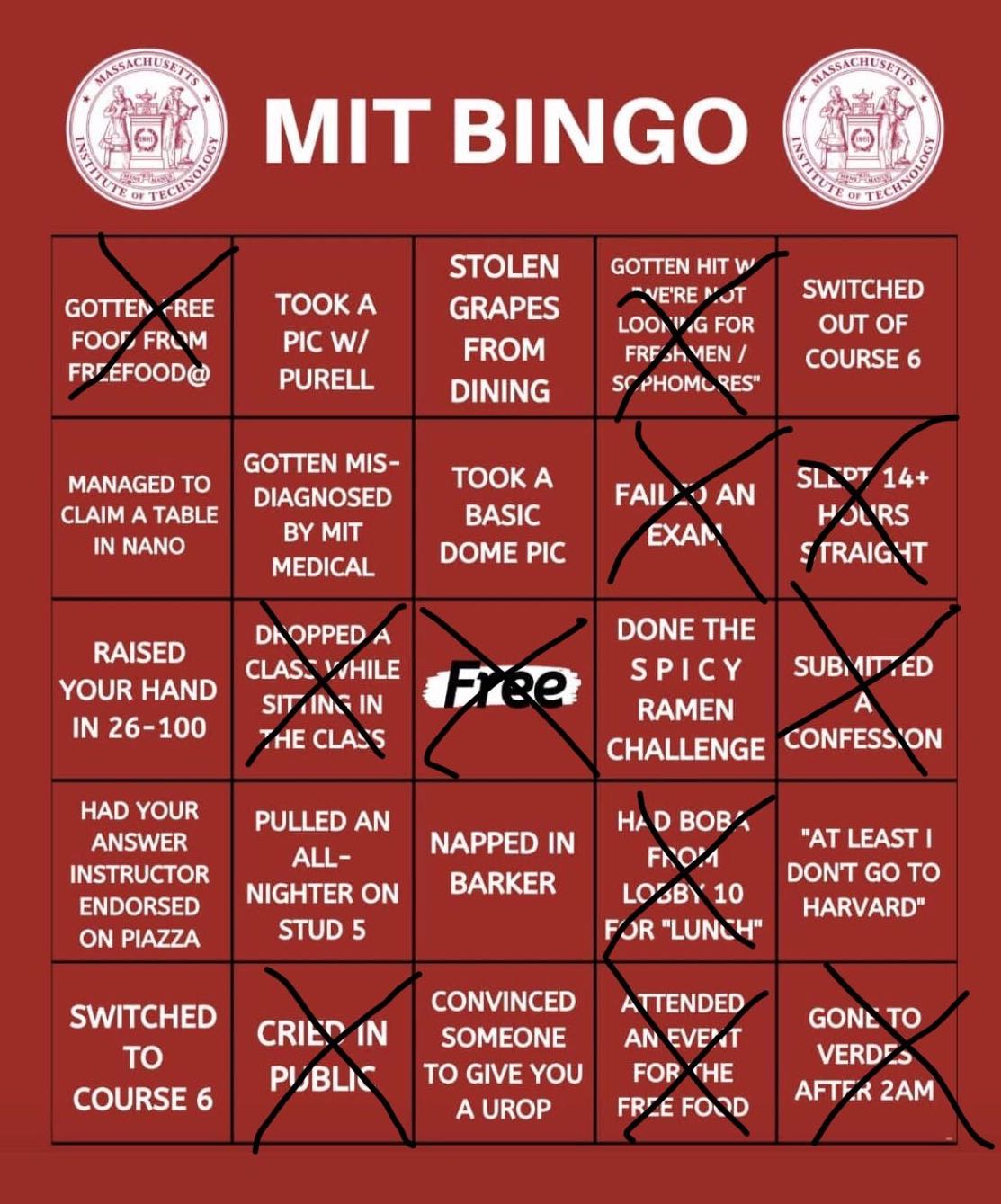 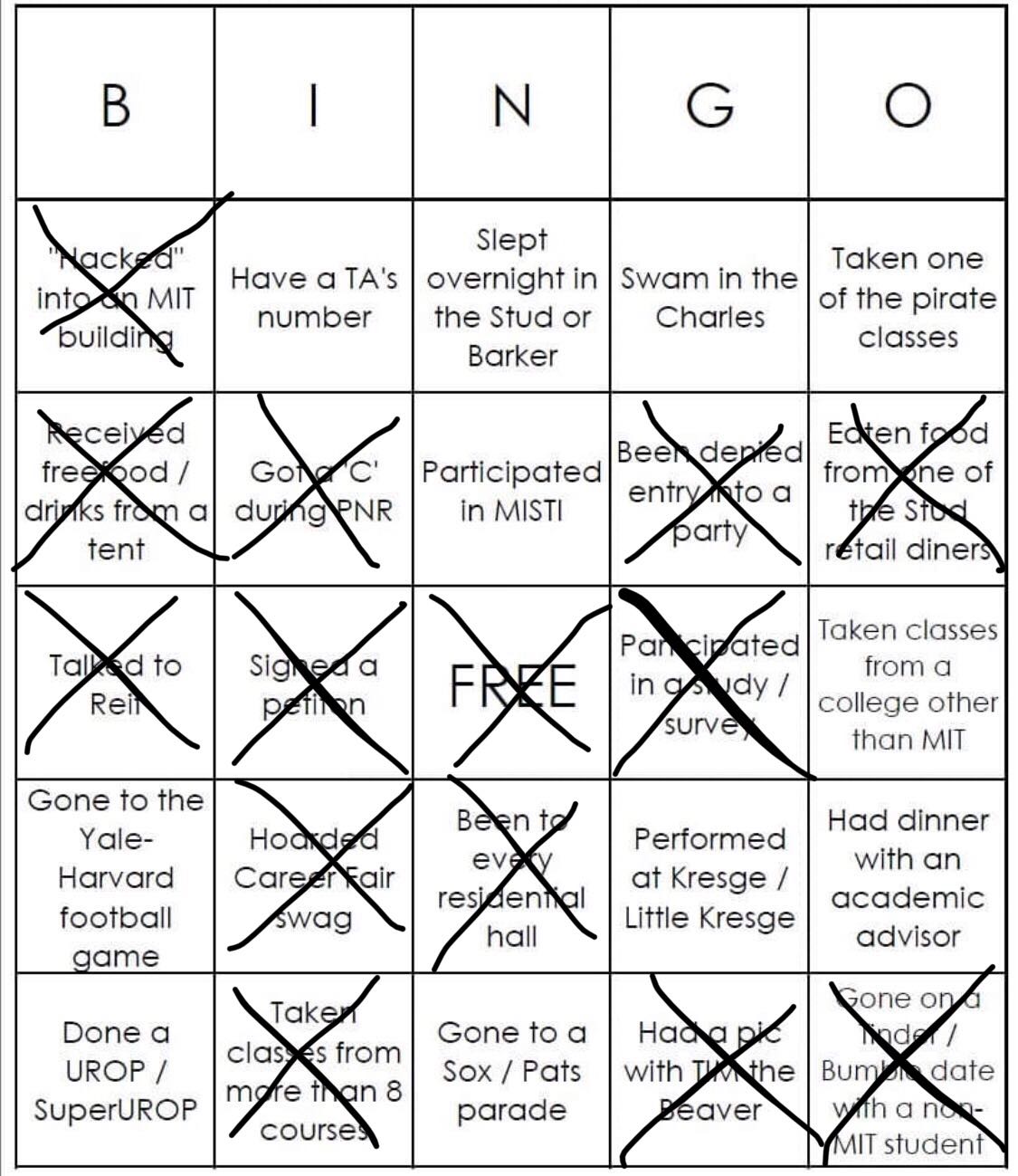 As a frosh, me and a few other people in my class got really into free food chasing, ie, we’d jump out of our seats and rush over to wherever the food was (given it was on the East Side of campus) and bring back the trays to the Senior Haus desk for people to eat from. We weren’t even particularly hungry most days, I just kind of liked the thrill of racing against the clock and other students to try to get somewhere first, and I liked when people would get excited over a “free food at desk email”. The one caveat is that often, the food on the list was of… questionable composition. It wasn’t bad or anything (maybe a little bit sketchy), but some notable things I remember at desk: just handfuls of coleslaw, only plantains and black beans, so much cold Bertucci’s pizza, and endless trays of basmati rice. (Also we knew if we saw people with no shoes quickly walking in the same direction that we were probably in trouble and wouldn’t make it.) 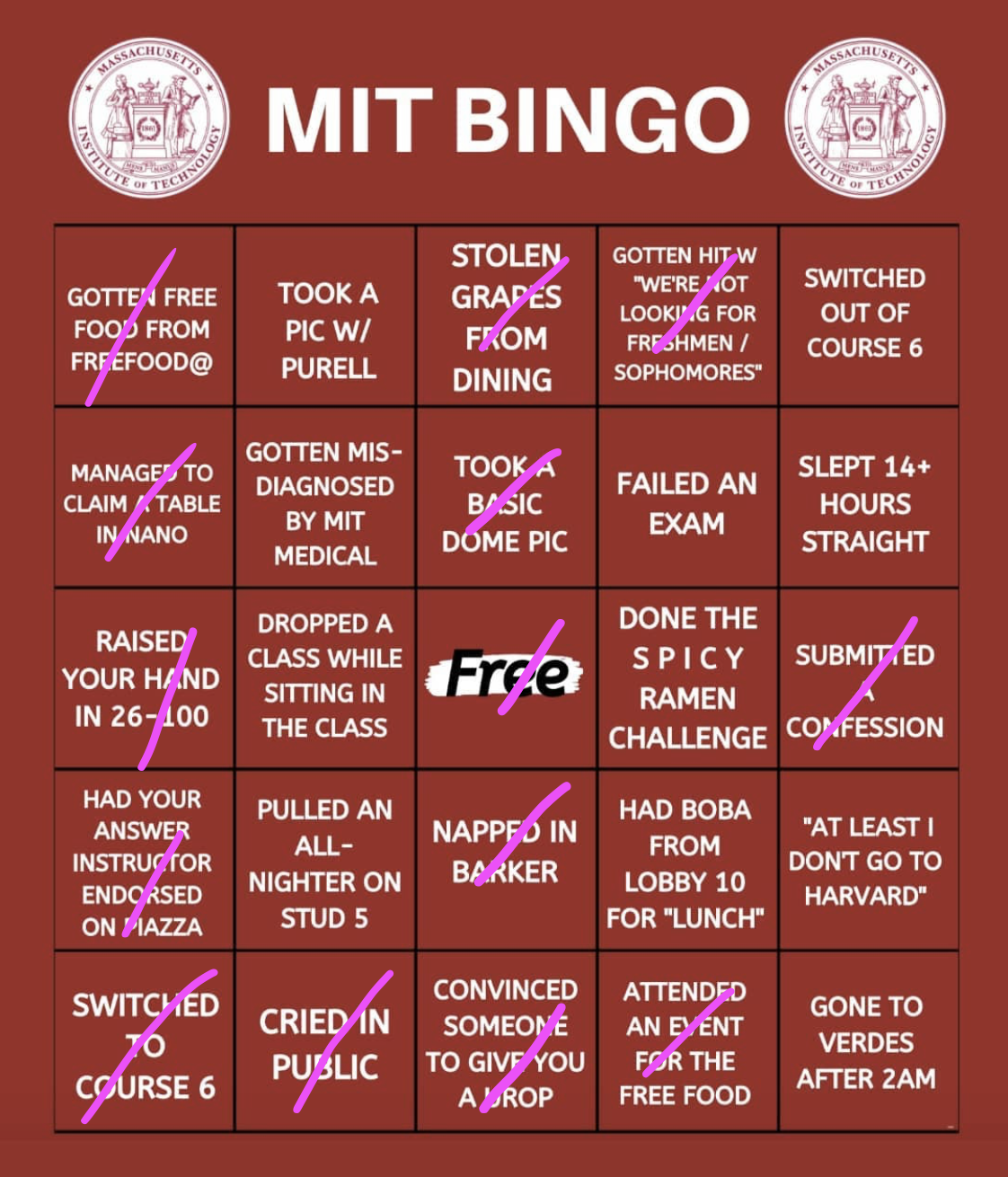 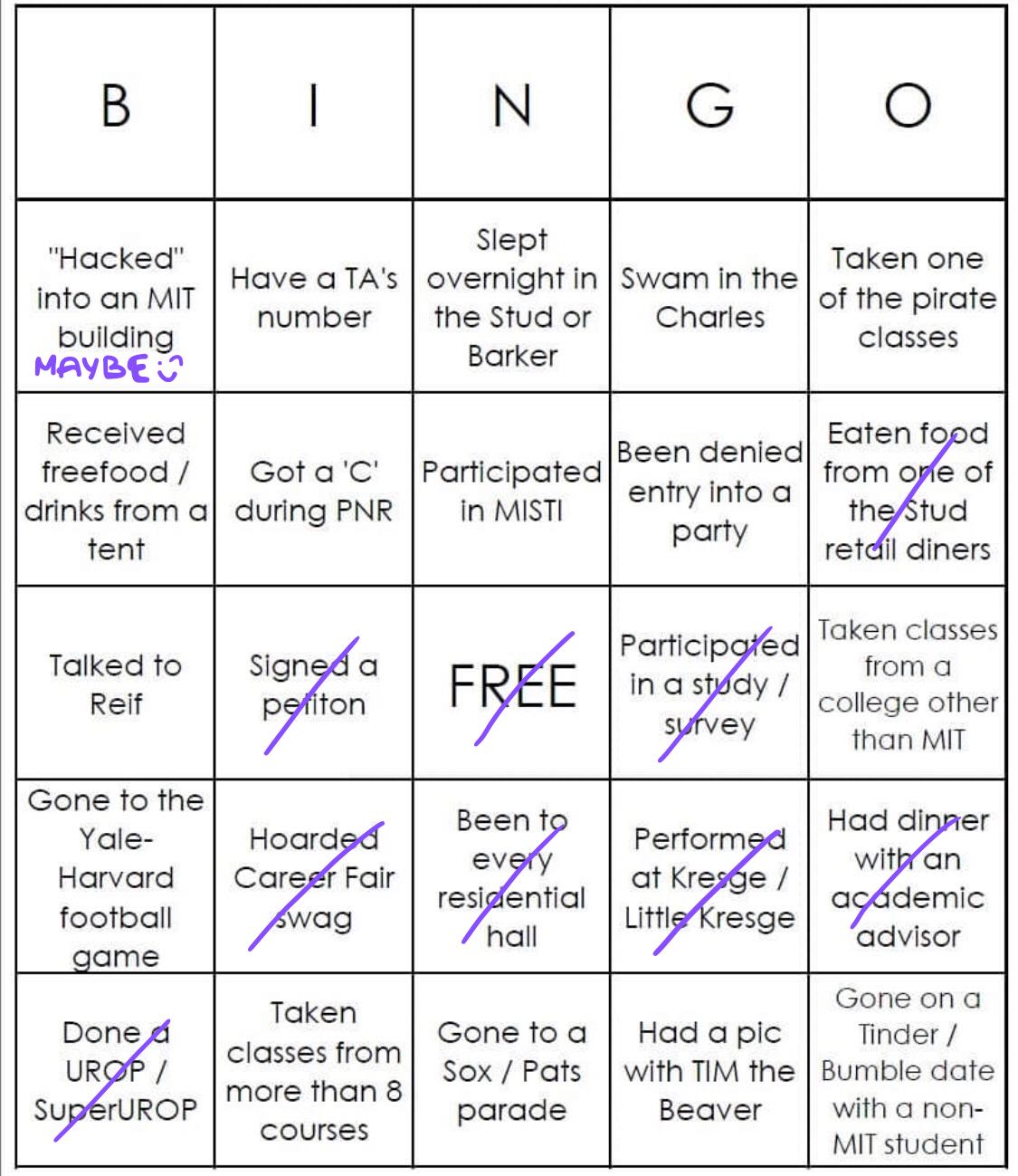 I think it’s funny that I have two bingos on one card and zero on the other. The white bingo card seems to have been more difficult for us in general, though.

The two things I’m most proud of: raising my hand in 26-100 and having visited every dorm. Things I’m still hoping to get around to doing: sleeping 14+ hours straight and taking classes from more than 8 courses (I’m at 7 right now, darn it.)

Hope everyone is doing okay, or at least, doing as best as you can under the circumstances <3