An organ, three harpsichords, and lots of learning

“The less learned cannot fail to be pleased, though without knowing why.”
-Wolfgang Amadeus Mozart

In other words: I’ve had a lot of exposure to music composed between 1600-1800. I’ve listened to, or played, music by Monteverdi and Hayden and Mozart and Bach and Handel and Haydn.

But I’ve never studied it. I am completely aware (and a bit embarrassed) that if you pinned me against a wall, forced an earbud into my external auditory meatus, hit “play” on your iPod, and yelled WHO COMPOSED THIS PIECE OF 1600-1800 MUSIC ?!?! I wouldn’t be able to answer unless I actually knew the song. I certainly wouldn’t be able to say “ah, well, I hear this technique and that technique, so it must be Mozart.” I couldn’t tell you off the top of my head how to distinguish between any of the composers I just listed above. And at a concert, I think the most intelligent thing I could say is “ah, that’s pretty!”

(There’s nothing wrong with saying a piece is pretty — but I’ve always wished that I could say more. I’d like to recognize the techniques and characteristics that make a piece distinct.)

If I had my way, I’d take all of them as a grand tour through the highlights of western music. My senior year of high school, one of my favorite classes (if not my favorite class) was AP Art History, which was super hard but made me a much happier human being. Buildings looked familiar! They had characteristics I could recognize and identify with a particular movement or location or time period. It’s like learning to recognize the constellations and their mythological stories: everywhere you go, you see familiar friendly faces that you can say something about, and which recall stories.

If I had my way. But class time at MIT is limited, and it’s too late for me to take all of those classes. So I’ll have to settle with 21M.235 this semester, and maybe 21M.250 next semester. By the way, I should mention that 21M.235 is a HASS-A. MIT’s HASS requirement means that, on average, every student needs to take one humanities, arts, or social sciences class per semester. The requirement addresses depth (each student must fulfill a concentration) as well as breadth (each student must take one “Arts” class, designated HASS-A, one “Humanities” class, designated HASS-H, and one “Social Science” class, designated HASS-S).

Three highlights from the class so far:

1) Playing the organ in Kresge Auditorium

3) Showing off by taking a test

1) Playing the organ in Kresge Auditorium

This is not a performance class, but most of my classmates are musicians, which isn’t surprising for any class of MIT students, much less for a class that has music-reading ability as a prerequisite.

This class trains us to listen to a piece of music, and discuss it in many dimensions. One of the most obvious dimensions – so obvious I usually forget about it – is the instrument the piece was written for. The harpsichord, for example, cannot sustain a note. You hit a key, it goes “bing!” and that’s it. A note is a binary thing: it’s “on”, or it’s “off.” It doesn’t make sense to talk about dynamics. In total contrast, the piano can sustain notes, and how hard you press is correlated to how loud the sound is. This completely changes the set of effects you can achieve through writing notes on a page.

Professor Neff is very fond of organ music, so during Week II of class (“Organ Music, Oratorio and Cantata”) she took us to MIT’s Kresge Auditorium and played the organ for us.

Here’s a picture of the Kresge organ: 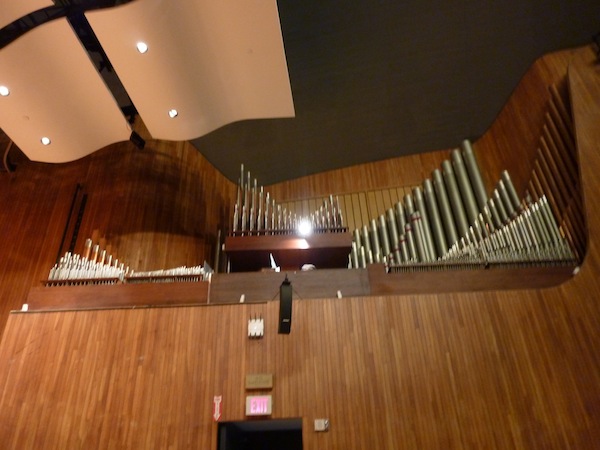 It was built in the 1950s; the largest of the silver tubes is 32 feet long (THIRTY TWO FEET LONG. THIRTY TWO!) and the shortest ones are six inches long. It’s hard to tell from the picture, but there are wooden flaps (called slats) against the wall behind the organ. The organist uses a pedal to control whether these flaps are open or closed, and in so doing controls the color of the sound. The organ is off to the side of the auditorium, at the front near the stage, and air is pushed through the pipes using an electric motor. In a Baroque church, the organ would have been at the back, and an instrument this size would have required 6-10 small children to essentially run on a 17th century Stairmaster to keep air flowing through the pipes — this made achieving a consistent sound really hard.

Prof. Neff led us up through a narrow stairwell to the organ. I sat down, and played a few chords. It was very empowering. Views from the organ: 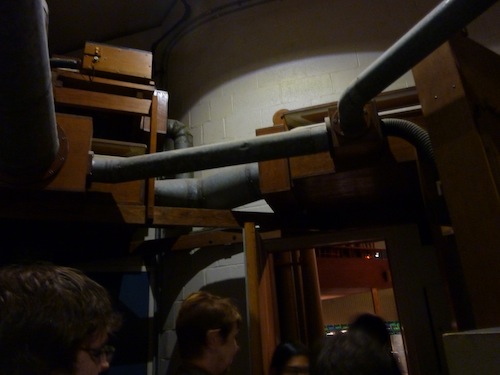 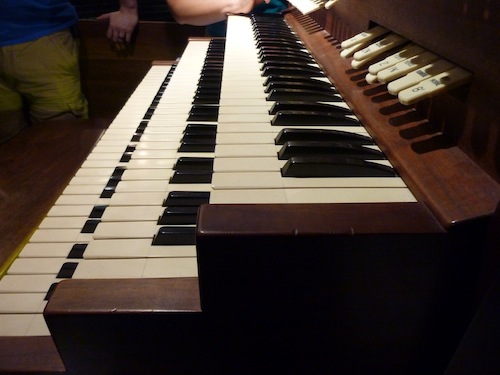 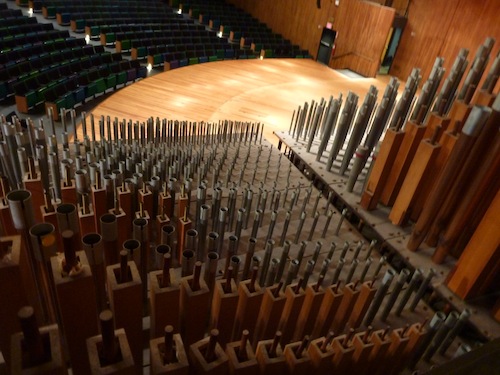 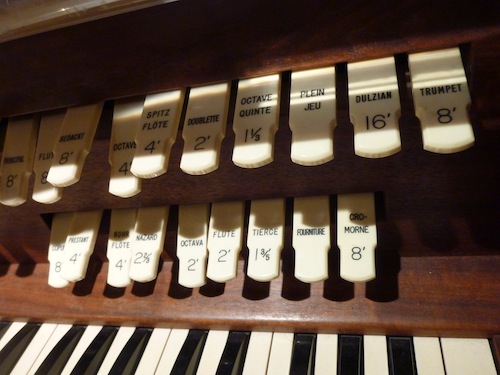 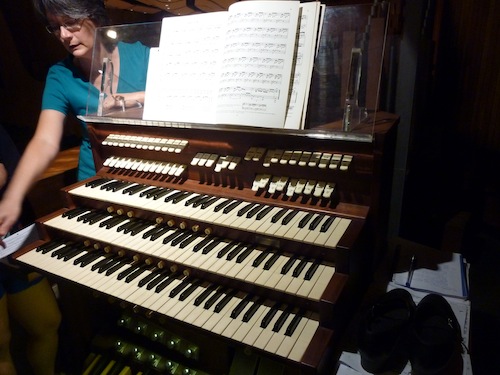 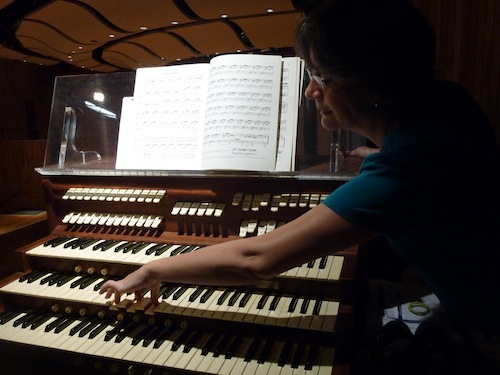 If you want the privilege of an expertly-guided tour of Kresge’s organ, I strongly suggest taking 21M.235.

One class, Prof. Neff brought in an internationally-renowned French Horn & harpsichord player. We spent the hour and a half class block with her in Killian Auditorium. She alternated between talking about the history of harpsichords, and performing for us. I don’t think I’d ever actually witnessed someone playing the harpsichord; I’ve just seen harpsichords in museums.

There are references to harpsichords in records dating as early as 1397. It rose to popularity in the 16th, 17th, and 18th centuries, and died out around 1812. There exists, however, a small and tight-knit international community of harpsichord enthusiasts: our guest’s teacher actually re-quills his harpsichords by hand, which involves cutting up goose feathers and trimming them to exactly the right size. An expert named Mark Lindley has a website about harpsichord temperaments (methods of tuning) – he travels the world and crashes with lots of harpsichordists.

“If you want to build harpsichords,” she said, “you have to be pretty OCD.” She told us that a couple of years ago there was an MIT student who spent a lot of time in the Hobby Shop building a harpsichord; not sure what came of that project.

MIT has three harpsichords on campus. There’s an Italian, which we purchased in 2011 but which was ruined by water a month ago. There’s a single French in 4-364 (a classroom) and a double French, which is the one we were playing with in Killian Auditorium. If you want to become a harpsichord master, come to Boston, because “we are very lucky in Boston to have a world-renowned keyboard-restorer”. Someone at BU leaned on an instrument and it fell to the floor and shattered into a million pieces, but this keyboard-restorer put it back together.

Our guest began in England with William Byrd. He was extremely skilled and popular, so he got to be 1) Catholic and 2) survive, no mean feat for someone living in England around 1600. She played a piece that people would sing while an unfortunate individual was being led to the gallows, and I admit that the context makes it difficult to store the piece in my cabinet of “Fond Memories”. Without knowing the context, though, I thought it was beautiful.

Unfortunately, we didn’t spend long in England, and moved right along to Italy. She played two toccatas by Frescobaldi, who was slightly younger than Byrd and a star all over Europe. Personally, I way preferred the Byrd, which is possibly my nine-years-living-in-England speaking but more likely just the fact that Frescobaldi’s music has no obvious organization to it. It was supposed to be very improvisatory, and the sections of the piece operate completely independently of each other. Directionless music makes hard listening.

From Italy, we went to France: Méditation sur ma morte future by Froburger (if you don’t know French, that title means: “meditation on my future death”. Cheerful stuff!), a wild piece whose title I failed to write down, a chaconne by Louis Couprin, and an unmeasured prelude by Élizabeth Jacquet de la Guerre. The score of the wild Couprin piece made a strong impression on me (she showed us the original score) — it looked like Couprin wrote a whole bunch of whole notes down (each note was represented by an empty circle) then tried to play connect the dots between the staffs. There were manic arcs from each note up to a note on a higher staff. Very bizarre. If someone handed me that to play, I would start banging my fists on the keyboard.

We also learned that one can purchase a little “apartment” harpsichord: the harpsichord equivalent of an upright piano. Tempting! Dorm room accessory, anyone?

3) Showing off by taking a test

Tests in this class consist of 3 sections: (1) Defining vocabulary terms, (2) Identifying a piece & composer & genre by listening to a 30-45 second segment, (3) Writing a short essay.

Professor Neff is kind enough to provide us with all the possibilities beforehand, so it’s a matter of systematically going through the study guide and achieving familiarity with everything on it. For those interested or particularly musically inclined, below is the study guide for our most recent exam:

It is so. cool. to look over a study sheet and realize that you could define any of those terms, recognize any of those pieces, and write a paragraph or two in response to any of those essay prompts. Particularly when you started the semester unsure if you could name a five pieces composed between 1600 and 1800. And particularly when you’re majoring in physics and minoring in astronomy, plan to go onto graduate school in astrophysics, and realize that the opportunity to become versed in Baroque classical music is very precious indeed.