Mustaches in the airport, Daleks in the library, and Food in many stomachs by Anna H. '14

(DISCLAIMER: Unless otherwise specified, photo credit for this post goes to Xiaoyue Xie ’15)

Because many MIT undergrads live in the same dorm for all ~four years, communities are tight-knit and develop traditions that outlast any particular generation of residents.

I live in French House. Nous avons beaucoup de traditions. Towards the end of fall semester, we hold Dîner de Noël, a fancy formal dinner. We decorate the lounge at the bottom of the New House 6 staircase: 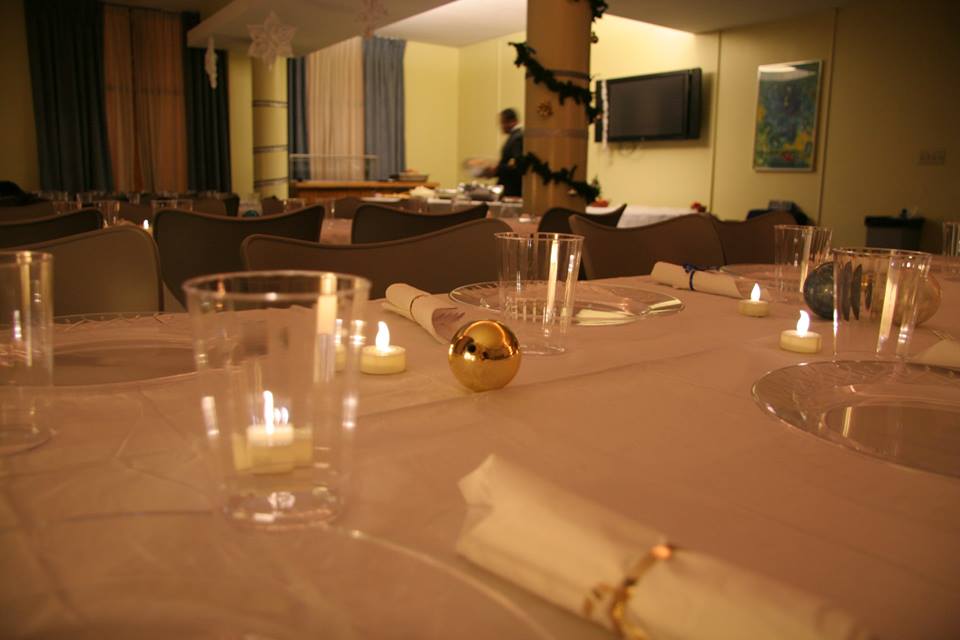 And, as is our nature, we do all the cooking. This year, the menu included: 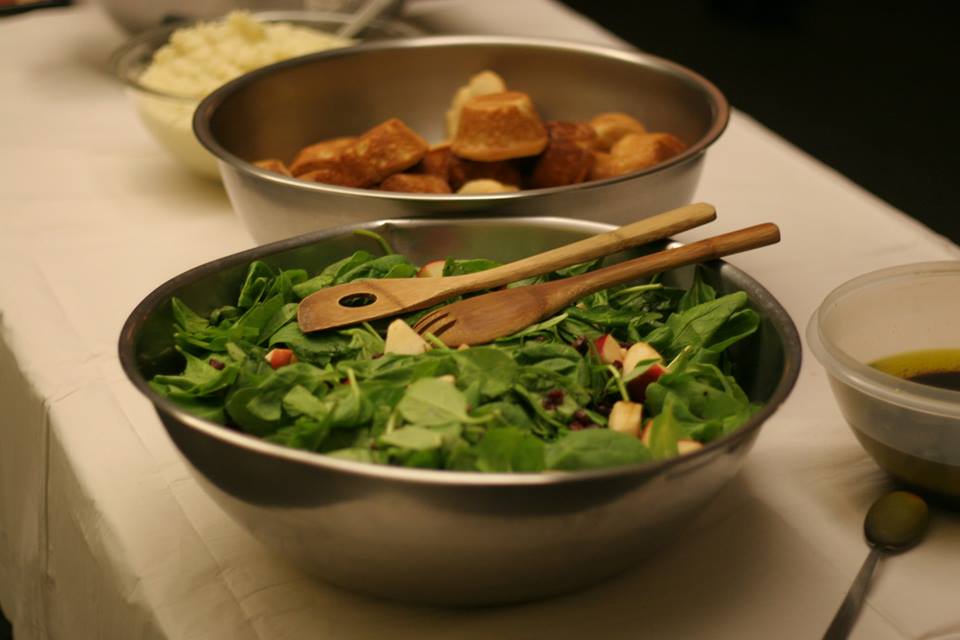 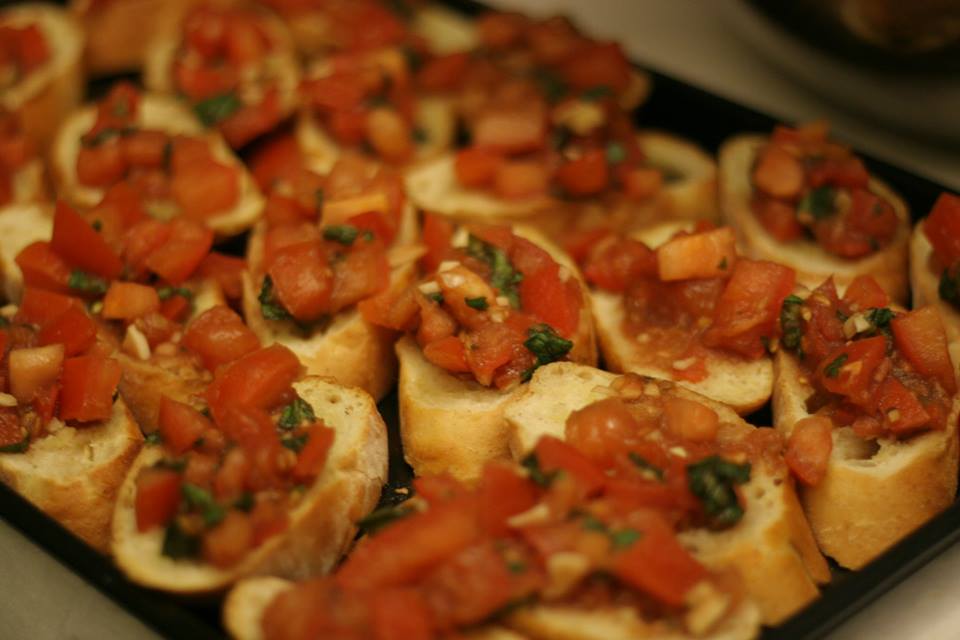 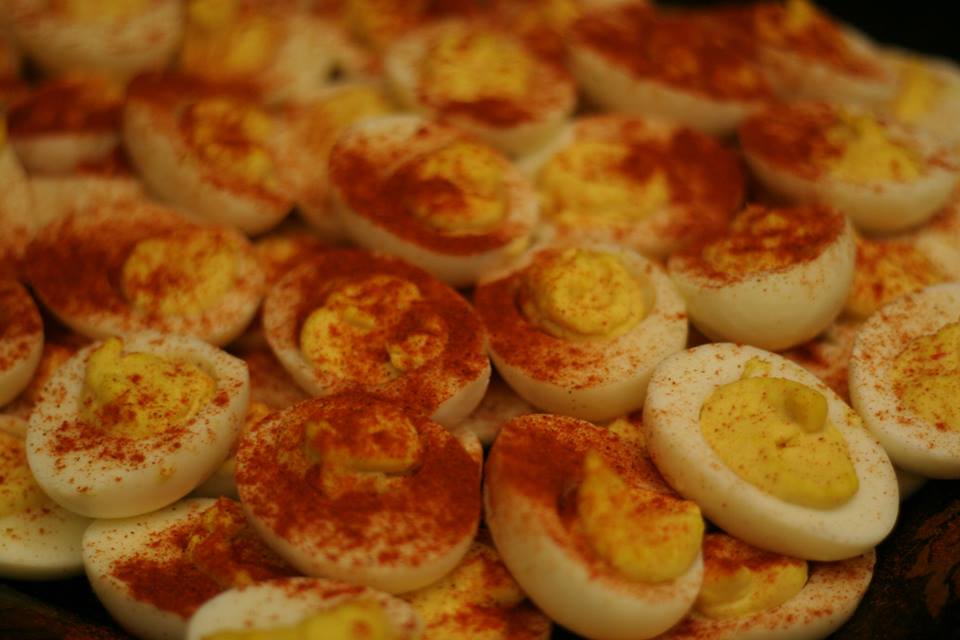 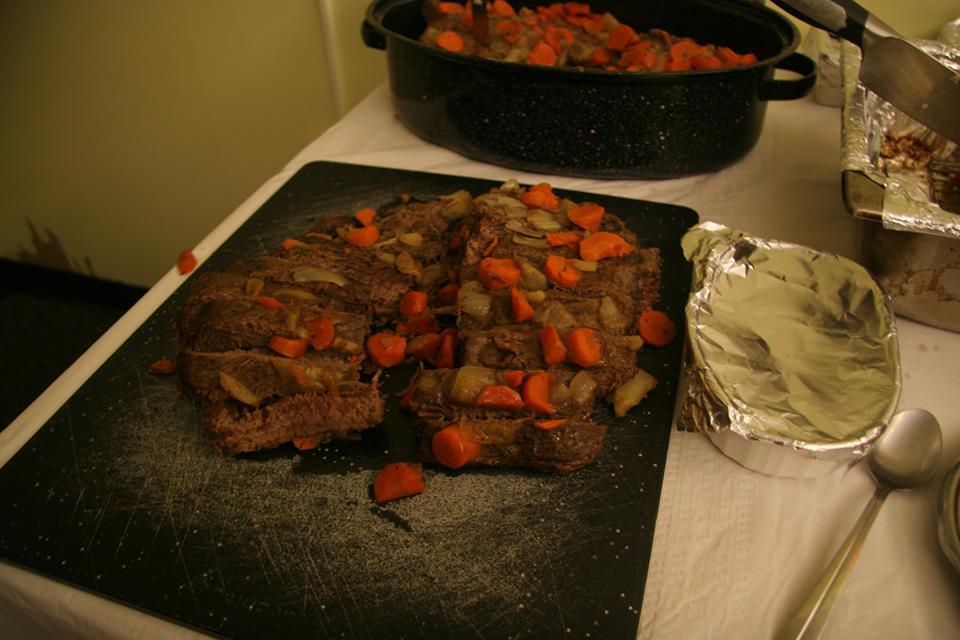 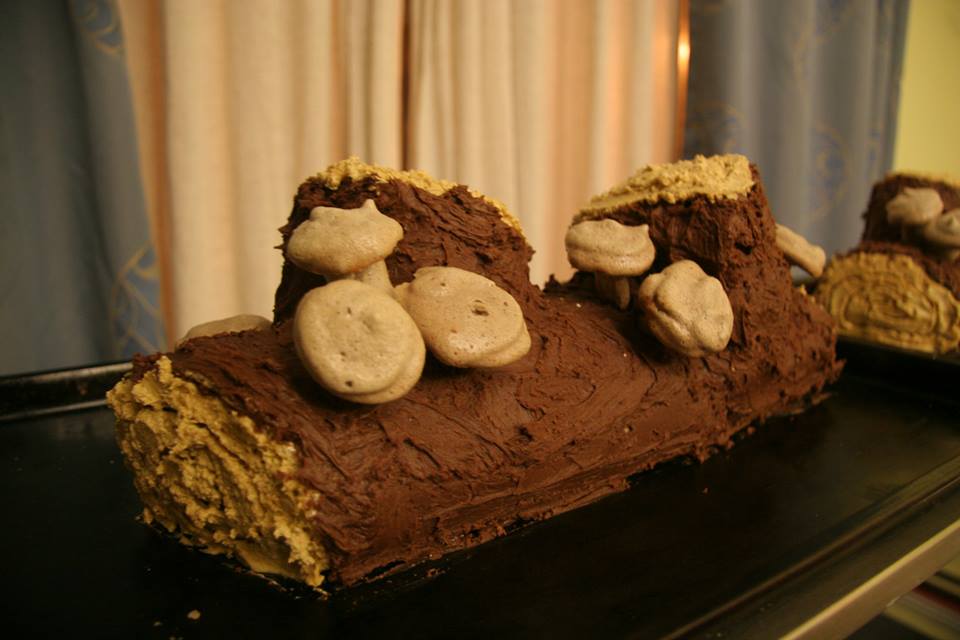 At this point, you’re wondering WHO COULD POSSIBLY EAT THAT MUCH FOOD??? The answer is: 25 undergraduate residents + 1 GRT, 4 dates, 1 brother, and something like 7 or 8 alums.

In the weeks leading up to Dîner de Noël, we have a Secret Santa gift exchange. Each resident spends ~$20-$30 on some number of gifts for a randomly-assigned other resident. At the dinner, we make two guesses about who our Secret Santa is, unwrap our final present, then get one more guess. Secret Santa reveals him or herself, and there is much love and hugging.

I was Secret Santa to Caitlin ’15. We share a love of Doctor Who and Lord of the Rings, and Caitlin plays the harp (yeah, she’s awesome) so I got her a pair of TARDIS earrings and “Into the West” harp music. I managed to keep my identity a secret :) 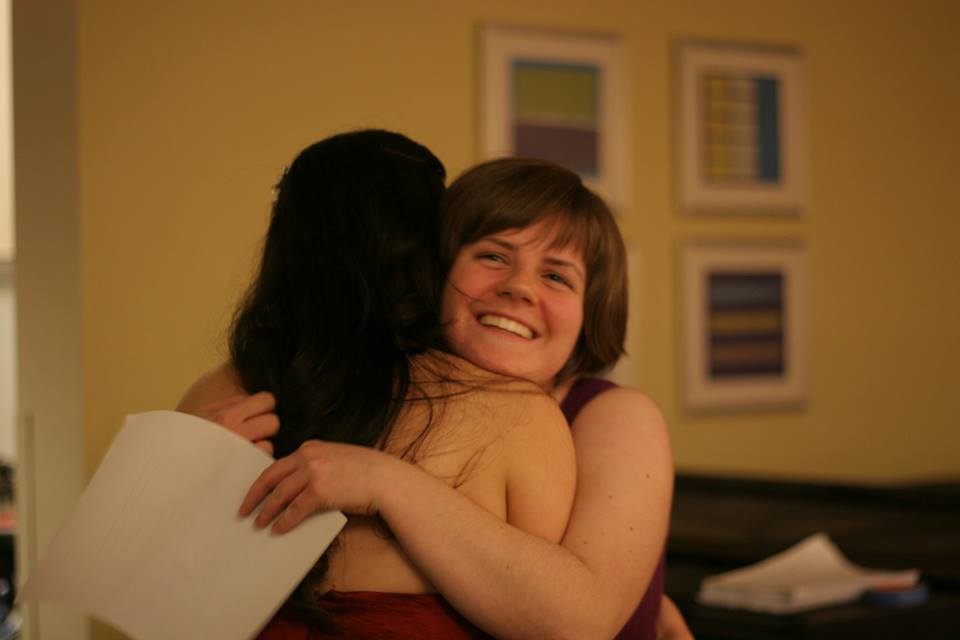 I LOVE YOU CAITLIN!

Then, it was my turn. My clues were:

0) Secret Santa probably plays an instrument, because all my gifts were wrapped in music-themed paper. This doesn’t really narrow things down in French House (or at MIT generally).

1) Secret Santa knows that my boyfriend has facial hair, because he or she gave me this button 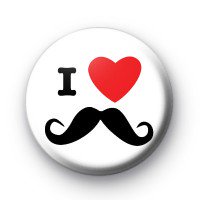 I pinned the button on my backpack. Last week, I flew back home to London, and while I stood in line to board the plane some man behind me yelled (over the heads of the people standing between us) YOU LIKE MUSTACHES????

The other travelers looked amused.

2) Secret Santa knows that I like Doctor Who, because he or she gave me a Dalek stuffed toy.

I clipped the toy to the front of my school backpack, and went to the library to scan receipts. After e-mailing the scanned receipts to myself, I put on my coat to leave and squashed the toy, which blurted out (very loudly):

It makes noise?!? Despairing, I started jogging for the door, while the Dalek announced to everyone in the library (who presumably wanted nothing more than Silence in the Library) that YOU MUST BE DESTROYED!!!!! 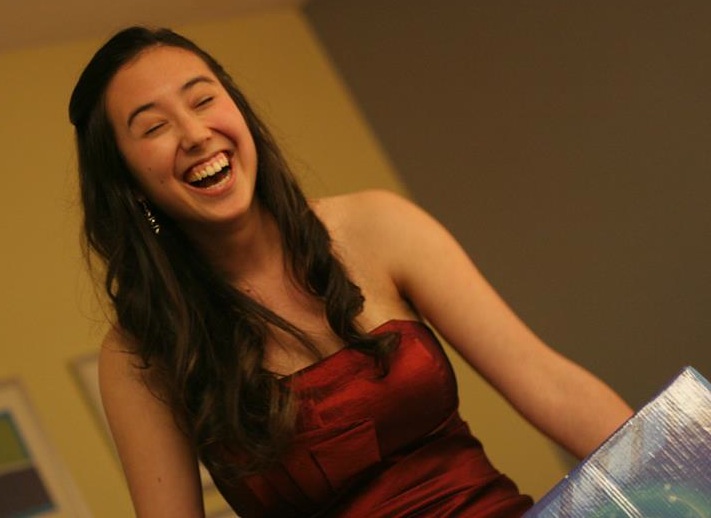 It was a telescope, and I spent the rest of the ceremony totally distracted with assembling it. After my third failed guess, Adam ’15 revealed himself. 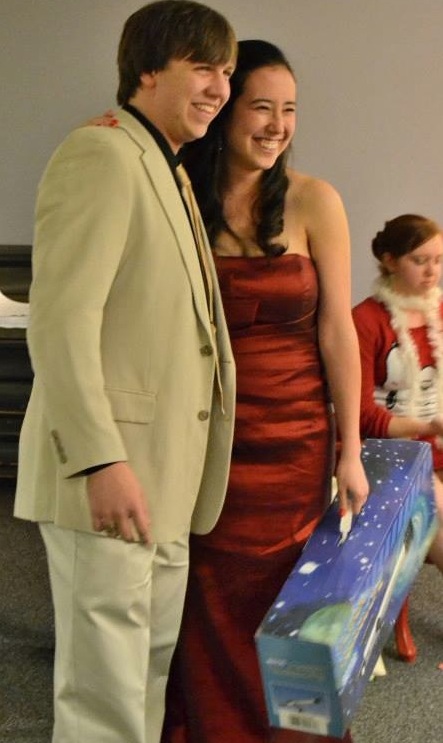 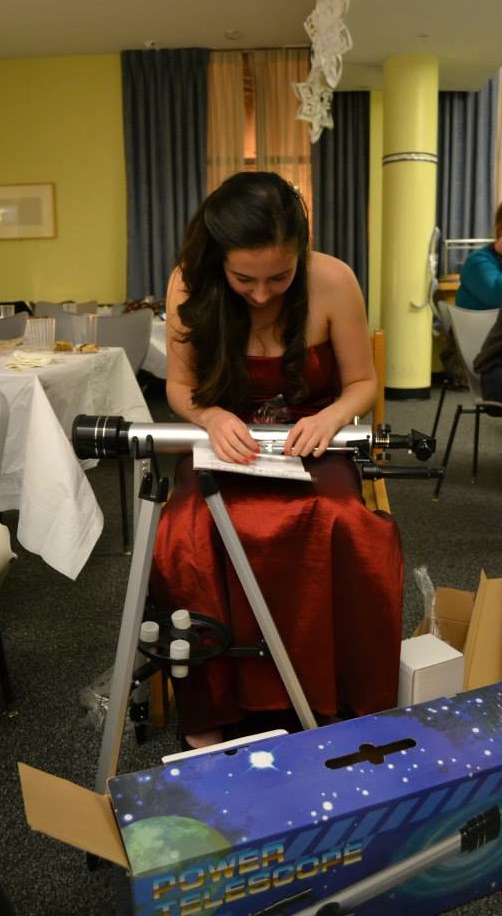 I was amazed by how personal each gift was. Because each Secret Santa obviously dedicated a lot of thought to the gift exchange, the following (incomplete) list will give you a strong sense of French House personalities and interests:

Cappuccino-flavored gelato
Soot sprite (from Spirited Away) slippers
A leather coin purse
A fox plushie (referring to this)
A keychain multitool
A bread cookbook
A chocolate passport (a selection of dark chocolates from countries including Venezuela, the Dominican Republic, Ecuador…)
Friendship bracelets
A shirt showing people high-fiving, with the caption “Asymptotic High Fives! The Fun Never Ends“
A tie clip in the shape of a saber (the fencing weapon)
A super pretty green scarf
An Italian cookbook
A CD of big choral works
Chocolate
A squirrel Christmas tree ornament
Ninjabread Men cookie cutters
A super soft stuffed toy crab wrapped in crab wrapping paper
A stuffed toy Totoro
“Pigsplosion” all wrapped in pig wrapping paper, including a squishy little pig, a pig mug with a little pig spoon, and a big stuffed toy pig
Doctor Who poster
Stick-on glow-in-the-dark stars
A homemade TARDIS with a planet mobile kit inside
A shirt with maps on it
A 3D-printed box containing a (real) Venus fly trap
*     *     *

After dinner and festivities, tradition is to take lots of pictures and sing carols. We took the usual Course 8 picture: 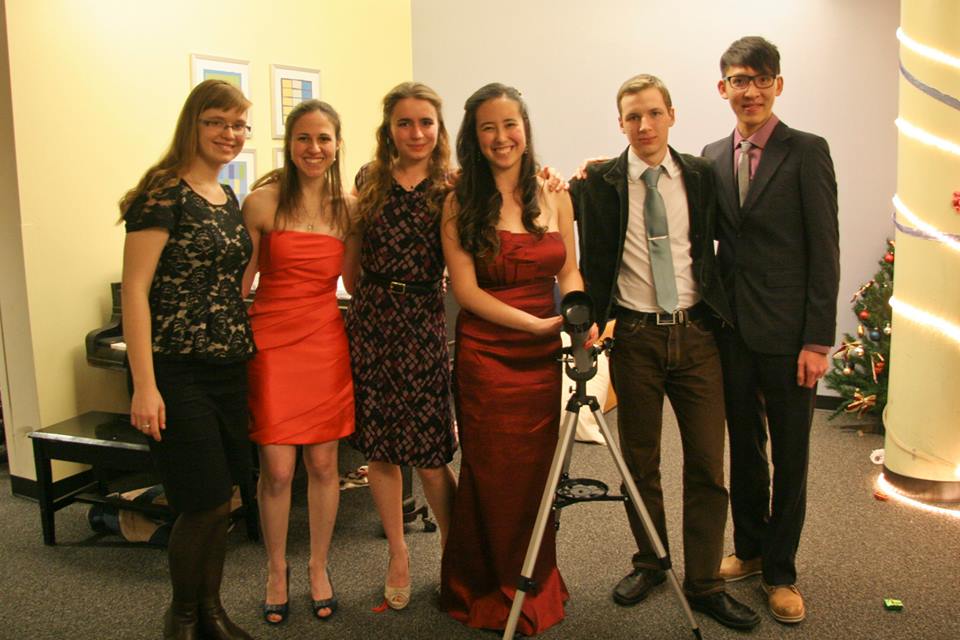 And my sister and I took a picture :) 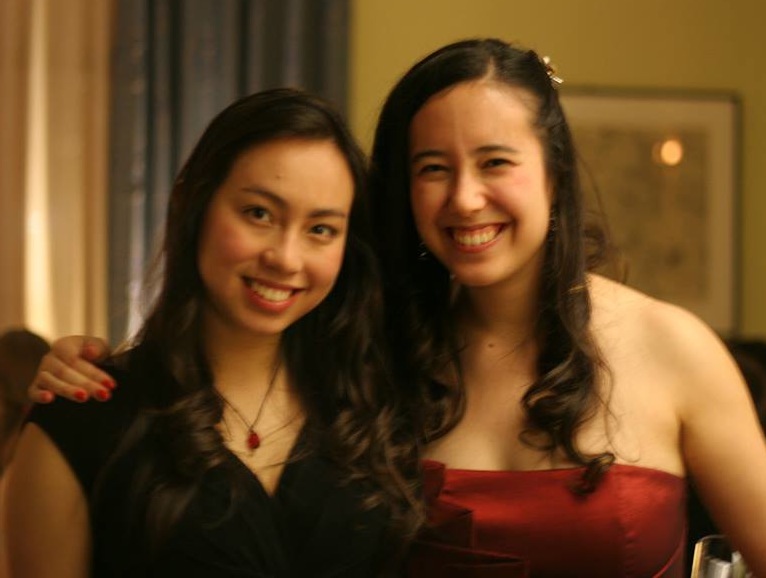