Have you ever had your car pulled out of a parking lot muddy field by a tractor? 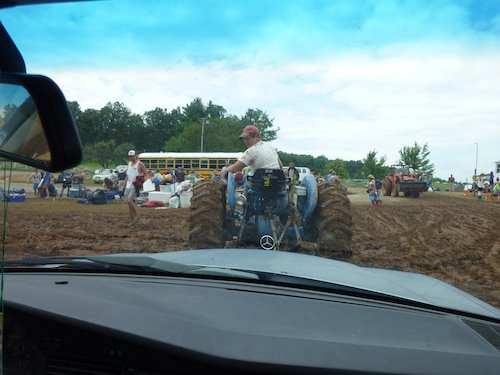 (For reference, this is what I mean by muddy: 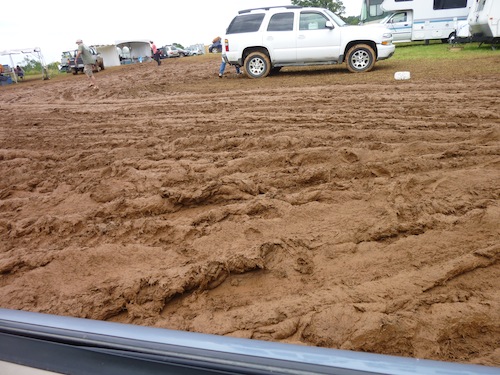 It’s kind of fun to sit in your car while it wags around, a tractor’s tail.

Raphael and I left Charlottesville after work on Friday. We rolled down the windows, rolled back the sunroof, and cruised along I-81S past a flurry of state forests. We made a quick stop in Christiansburg to ask for directions; I hopped out of the car, crinkled folded map in hand (neither of us have a smartphone), and hailed a group of passers-by.

Me: Hello! We’re trying to get to Floyd; could you help direct us?
Woman: Oh, you’re trying to get to the festival!
Me: Yes!
Woman: Oh, dear.
Me: …
Woman: Be careful.
Me: …
Man: This is the road right here — just keep going.
Me: Oh, okay — thank you!
Woman: BE CAREFUL!
Man: And watch out for the Mad Russian once you get to Floyd — gives a lot of speeding tickets.
The what?
Woman: You have fun now! But BE CAREFUL!
Wait, the what?
Other woman: You’re not her mother!
Okay. Time to go.
I reported back to Raphael, and we continued on our way, keeping a wary eye out for someone looking both mad and Russian. Along the Blue Ridge Parkway (a snippet of its 469 miles) we pulled over to admire the sunset. 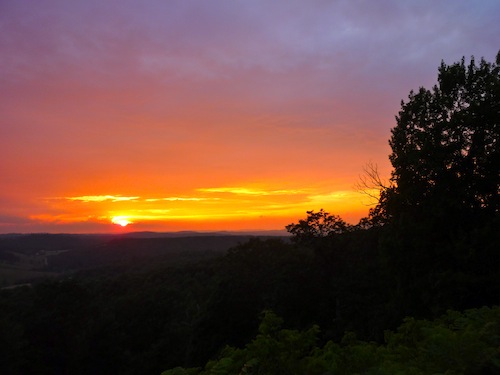 I took a stroll and Raphael snapped a picture. My hair felt orange. 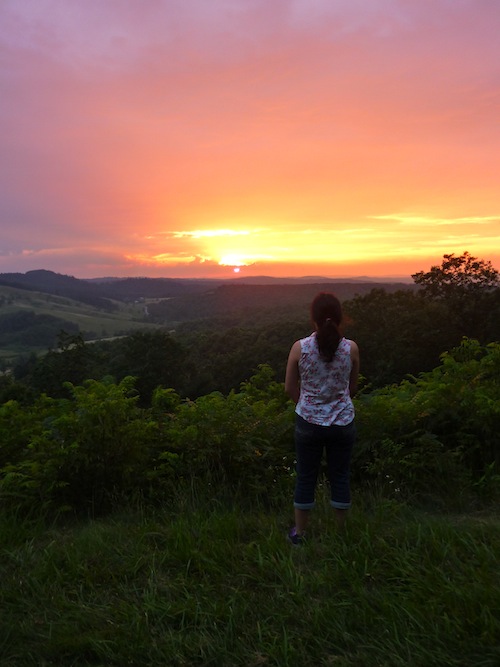 We made it to a campsite without any Mad Russian experience. We pitched our tent in the dark, did some reading (I’m most of the way through this) and fell asleep, marveling at how “smooth” our trip had been and how “lucky” we were. Famous last words.

The next morning, I woke up to the sound of heavy raindrops crashing into our tent.

I thought: “Good thing we put up the rain fly.”

I thought: “Why do my feet feel wet?”

We didn’t tighten the edges of the rain fly enough. There was a swimming pool at either end of our tent, exactly where Raphael had put his clothing soaking wet rags. He went the rest of the day wearing nothing but a rain jacket, rain pants, wool socks, and hiking boots. I was spared; I had lined my clothes along the other two edges of the tent.

A little damp and a little distressed, but eager to get to the festival, we packed everything up and drove to the parking lot indicated on our ticket, where we were redirected to another parking lot because this one had been deemed unsafe to drive in. Then, we sat in the car for half an hour behind a zillion other cars who had presumably just been told the same thing. THEN, we sat in the car for forty minutes in the mud, inching forward slowly, waiting for the all-clear to proceed. I decided to get out and exchange my ticket for a wrist-band while we waited; I hopped out of the car, and landed ankle-deep in mud.

Goodbye, purple Nike sneakers. You’ve been good to me.*

*They’re actually doing okay; I dumped them in the bathtub when I got home. Definitely a near-death experience for them, though.

Turns out that they ran out of parking spots (who planned this event??) — the “all-clear” finally came when they opened the gate to the next-door parking lot field. Instructions: drive through this swamp of mud, uphill through more mud, and park your car! Raphael performed some heroics; with one foot on the gas, he opened the door, and pushed off from the ground with his other foot while a car cheered us on and gathered behind the car to heave, not worried about the fact that they were being sprayed with mud from the wheels.

Not realizing that any of this would take as long as it did, we were running 45 minutes late to meet our friend, who was already at the festival. We rushed out of the car in the rain and climbed on a yellow school bus, which took us to the festival entrance. Chaos: tents, mud, food, rain, people falling and sliding and dropping things. I bought a poncho gigantic yellow tent that I supported with my head. Our friend had long left our meeting point, so we gave up on finding him and went back to the car to grab our camping equipment and dry off.

We lined our wet clothes along the dashboard and turned the heat on full (it worked amazingly well.) Both of our phones were dead; while I figured that we would just grab our chargers and find an outlet at the festival, Raphael decided that he was due for a Feat Of Heroism. With a “hey, this is also 12 volts,” he pulled out the car’s CD player, opened it up, cut two of its wires (“these don’t do anything anyway”), charged his phone, called our friend, arranged a meeting time and place. 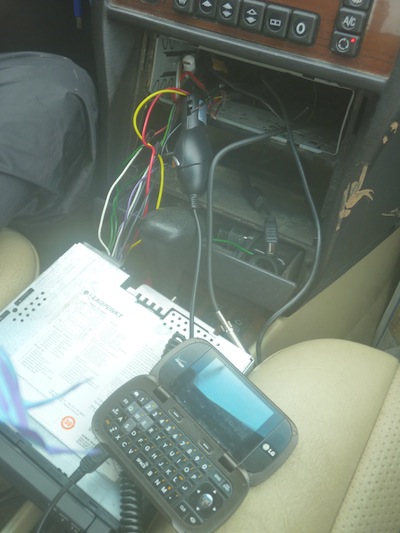 Back to the festival! Clunky bags over our shoulders, we braved the rain again, and wedged ourselves into a yellow school bus alongside thirty-ish wet, muddy, cheerful people. They waved around handheld radios, laughing and exchanging call numbers. Every other word was “EXCITED!” or “FINALLY!” or “MUSIC FESTIVALS!” until the bus had finally inched to the festival entrance, and we all piled out back into the mud. A dirt mud road wound between stands and tents and poncho-clad festival-goers, and opened up onto a big open field mudbath — tents sold fried noodles, breakfast burritos, ice cream, coffee; rain drenched exposed faces and clothes and the hair of people who had given up and had taken off their raingear long ago. People slipped and fell and lost their shoes in the mud; they lost cellphones too, probably, and wallets. Tents were packed together off the road in thickets; you slid or stumbled to get from one to the other. Or fell. 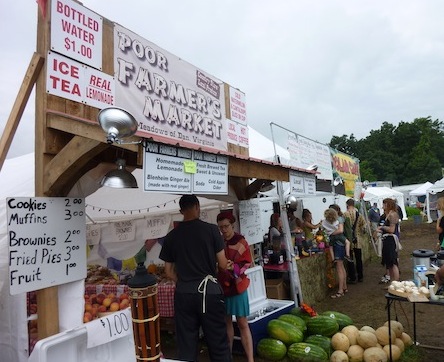 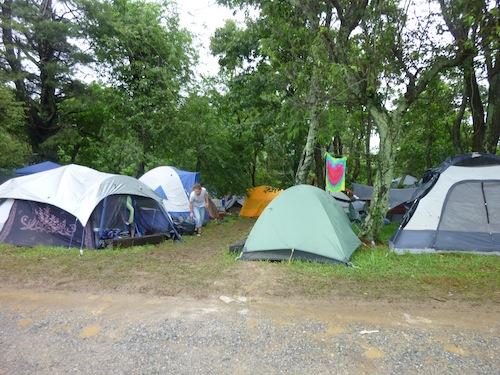 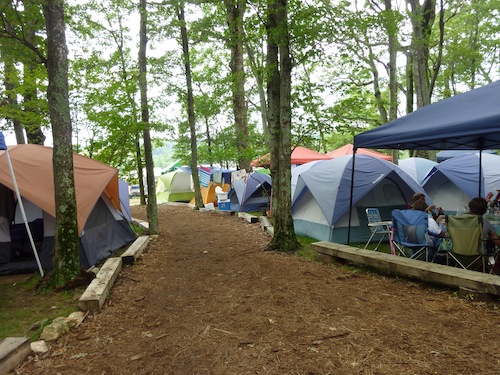 By the cluster of port-a-potties, there was one of the coolest vehicles I have ever laid eyes on. 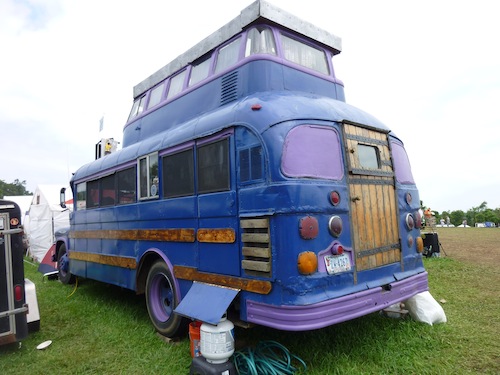 Was sorely tempted to steal it and drive it back to campus. Resisted. Anyway, we waited around the central fountain, took a picture (smiling, in spite of it all!) and met up with our friend. 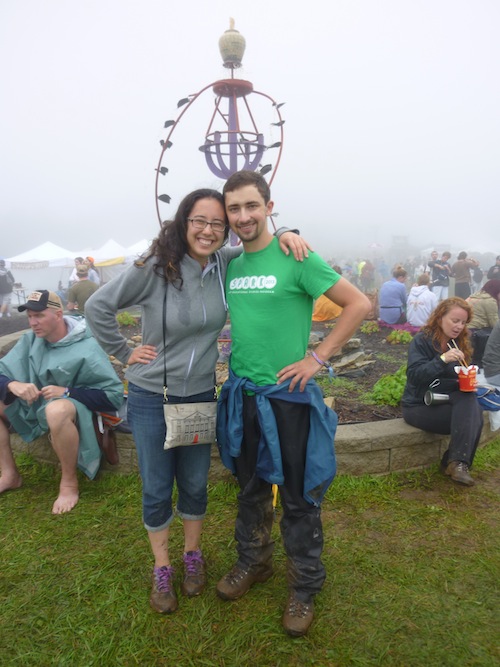 Turns out that our friend, and the other grad students, brought a home-made wooden painting of Carl Sagan, which they waterproofed and mounted on a stick. Here’s Raphael with it (and my friend Trey photobombing in the background): 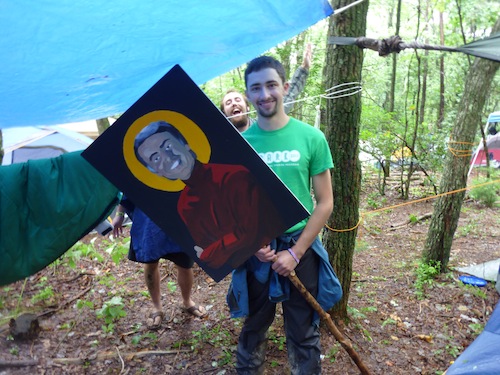 We carried Carl Sagan around the festival, and to the The Devil Makes Three concert that night. A couple of people literally fell to their knees and rocked back and forth yelling HAIL SAGAN! when they saw us — people took pictures of us, high-fived us, asked who that was (we enlightened them.) During the concert, we pushed our way through the audience yelling “HAIL SAGAN!” and “BILLIONS and BILLIONS of STARS!”, reaping the high-fives and the “HEY, I SAW YOU GUYS EARLIER!”s and the “THAT’S AWESOME!”s. It was kind of surreal; I felt like I knew the whole crowd.

There were over 15,000 people at that festival, and when it came time to leave and we saw the line ahead of us for the buses, we believed the figure; we read science fiction books to pass the time. Eventually, we made it onto the bus, which took us back to our car. Getting back out to the road felt a LOT like that one Mario Kart track: Raphael hit the gas and zipped from one patch of grass to the other, trying to avoid the deepest parts of the mud — but alas, the mud could not be beaten.

So, a tractor pulled us out. The festival organizers had brought over all the farmers in the area to help out — they seemed to be enjoying themselves. When we finally got back to civilization and stepped on the sidewalk, it felt weird to walk on solid ground; I had gotten used to heaving my feet through shin-deep mud.