Last December I blogged about judging Trashion 2014, an event where MIT students design and model unconventional outfits to raise awareness about environmental sustainability. In that post, I wrote:

Recently, my evaluative assistance was again requested, this time by Rachel W. ’16, founding President of MIT Women in Aerospace Engineering (WAE). WAE is a student group that, through a variety of programs, seeks to foster a community and encourage relationships among women in aerospace engineering and to build outreach initiatives within both MIT and the broader community.

On Monday, WAE hosted the Boston Qualiflyer for Red Bull Paper Wings. If you haven’t heard of Paper Wings, it’s basically a promotional event for Red Bull based around competitive paper airplaines. There are three categories to the event: distance, hangtime, and aerobatics. Each contestant is allowed to enter any or all of the categories at each qualiflyer. Distance and hangtime are measured by Red Bull staff, but aerobatics is evaluated by a panel of judges on the basis of creativity, aesthetics, performance, and so on. 12 national finalists earn a spot in the Global Finals at Hanger-7, in Salzburg, Austria, the legendary mansion/museum/multifunctional venue of Red Bull founder Dietrich Mateschitz. And that’s how, on Monday, I found myself sitting between Professor Raul Radovitzky and Tim Beaver, watching students from all across New England and upstate New York throw paper airplanes for three hours inside Lobdell Dining Hall in the MIT Student Center. 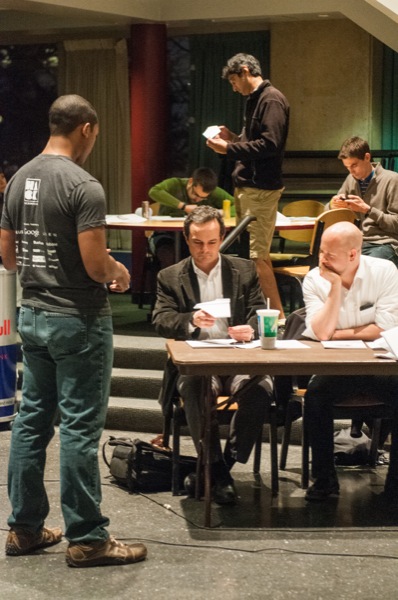 You may quite reasonably ask yourself: how does one judge the aerobatics of a paper airplane? According to Red Bull, the relevant criteria are:

In practice, what this meant was that competitors in aerobatics would bring their planes to the judges table. Prof. Radovitzsky would hold it up for his inspection, and attempt to balance the plane on his finger to locate its center of mass. I would observe this, although I was most interested in the performance of the flight and of the flyer. Tim…mostly danced. 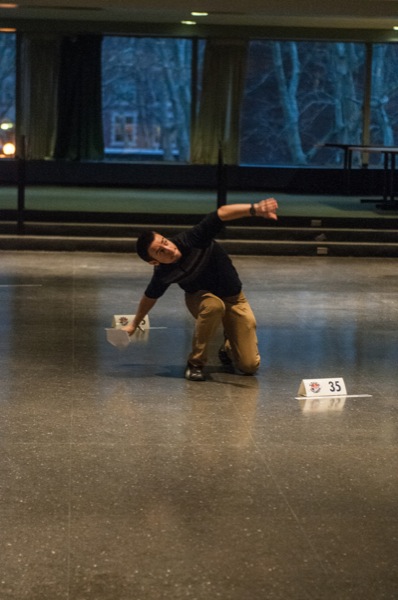 I met students from MIT, Harvard, BC, BU, NEU, and RPI; there may have been more colleges represented who didn’t compete in aerobatics. One of the students I knew was an MIT freshman, Andy T. ’18, who I’m told is the only freshman currently enrolled in Unified Engineering, a central class in Course 16, Aeronautics and Astronautics. Andy finished near the top of all three categories at the Boston Qualiflyer; he was one of 3 students who had to be taken to the MIT basketball court for the distance competition because Lobdell wasn’t long enough. I asked Andy about his history with paper airplanes and how it had factored into his MIT education. Here’s what he told me:

I remember beginning to fold paper airplanes at age 5, at Seaton Day Care in Fox Point Wisconsin. My friend Zach and I formed a little team at the day care; during indoor recess we would create all kinds of crazy planes, some of which my dad showed me how to fold the day before. We would test them out, then give/teach them to other kids. This is perhaps my earliest memory, or at least the only thing I remember from day care. Years later, having not seen Zach since I left Seaton around age 6, he and I sat next to each other in AP Calculus. A few weeks in, we had some free time during which I made one of my favorite planes, the trick glider I used for the Red Bull aerobatics competition, and then we realized that we did the same thing together 10 years previously!

Wait–I also remember throwing up after eating too many squishy cooked carrots and mixed veggies (gross). Day care was rough.

Throughout elementary and middle school, I learned a few more types of paper airplanes from books. I also took the standard delta-wing and combined paper fan folding to create wing “ruffles,” which I found helped stabilize the plane. Now taking course 16 classes (Unified), learning the aerodynamics of flight, I realize that these ruffles help to give an otherwise flat wing a combined winglet-dihedral type of roll stabilization!

Although I discovered wing ruffles around 2nd grade, and my dad commented that perhaps I would like to someday become a professional plane designer (i.e. aerospace engineer), I had never seriously considered the idea until last summer. I came to MIT desiring a technical education in building things, like Q in James Bond. Around age 7, I had played the video game on N64 and seen the Bond film Goldfinger, and it made a lasting impression…since then and until high school, I had dreamt of building cool gadgets for either the CIA or myself. These desires motivated me to choose robotics over band in high school and ultimately wind up here looking to major in mechanical engineering. 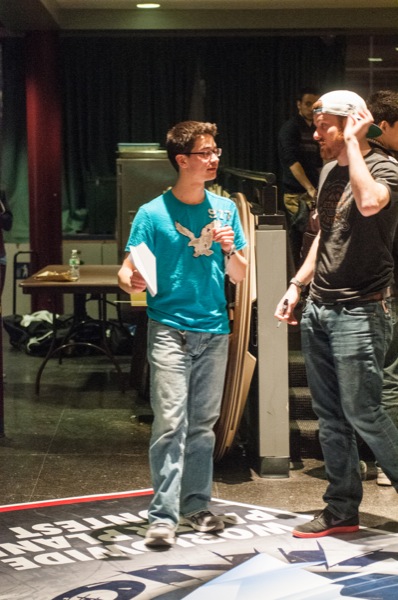 Last summer during Interphase, I spoke with a math TA about majors, and she encouraged me to think about 16, since it is “the same theory as course 2 but way more fun and interesting.” At this point, I had already decided the most exciting application for building things is space exploration and colonization. So here I am, enjoying all the excitement of Unified, building and designing real RC airplanes as well as paper ones, and absolutely loving it. So far, my experience has been that course 16 is rigorous and demanding as all MIT courses are, but I doubt that many others have as much fun during lectures or outside of them. Course 16 is like a big family of excited kids gazing at the stars and dreaming of the future. It is also like a powerhouse incubator with the resources and ability to get there.

We have launched weather balloons high enough to see the curvature of the Earth and chased them all over the state, cut airfoils and constructed planes from scratch as well as rockets, met astronauts such as Buzz Aldrin and Michael Collins, asked questions to industry leaders such as Elon Musk, enjoyed breakfast and igloo parties with professors (specializing in fluid mechanics–orange juice, and materials/structures–snow blocks), traveled through the world’s largest building by volume at Boeing’s assembly plant in Seattle, visited the Dragon at SpaceX, James Webb at Northrop Grumman, and Voyager at JPL, and we spent an entire lecture watching fast planes to learn the physics of scramjet engines and shockwaves.

It has been hard and rewarding; I have received F’s as well as A+’s (160%). The science is applied, the degree is flexible as one desires. Overall, I think it was a fantastic choice.

Another person I ended up spending a lot of time talking to was Aurora. Aurora is 8, and has wanted to be an astronaut since she was old enough to say the word; she met Rachel from WAE at an Aero/Astro event, and Rachel has been mentoring her ever since. Aurora was the youngest contestant by about a decade at the competition and probably the most enthusiastic, as you might have guessed from the flight suit she wore to the event (she is starting pilot lessons this year through the Young Eagles program). When she wasn’t throwing paper airplanes, she sat near me at the judging table, where she held forth, confidently and knowledgeably, about the finer points of the various space missions that have taken place in her life. 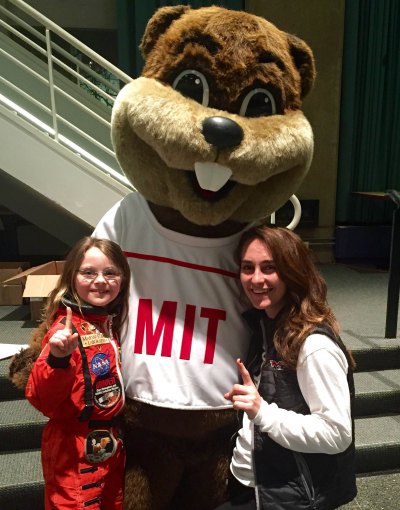 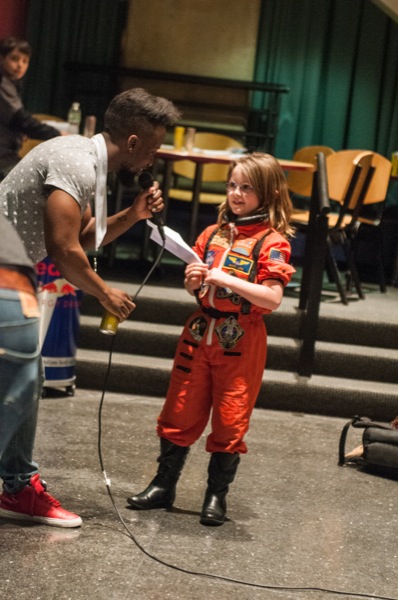 By the end of the event, Ian P. ’17 had been crowned champion in the distance category, and his flight of 126’4″ had earned him a trip to Austria. I asked Ian the same question I asked Andy but got back a slightly different answer:

Sure. I was studying for a 5.60 exam coming up and my friend Nolan Kruse said we should go chuck a plane at “that thing” as a study break. [Rachel] said we should check out the contest earlier last week, so we both went. My strategy was to fold a mediocre plane and throw it as hard as possible. I have no history of plane folding ability, so I’ll give credit to Nolan, for his motivational words, and to me for my lack of concern for the health of my shoulder.

The opportunity is amazing. I really just threw a piece of paper and they told me “you’re going to Austria,” and I was just kind of confused that all it took was a decent arm. It’s got to be the most lucrative useless talent that I never knew I had. 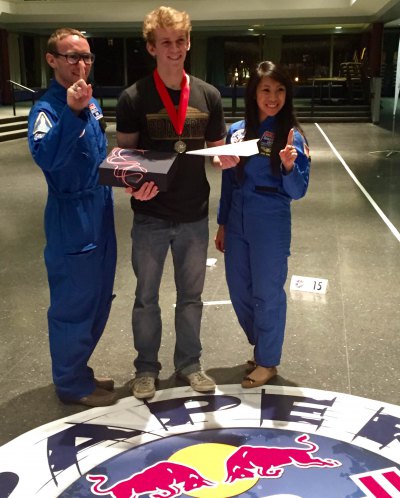 So that’s how me, Tim Beaver, an MIT professor, and an 8-year-old prospective astronaut spent our Monday night at MIT, while a sophomore won an unexpected (but not unwanted) trip to Austria. Thanks to Rachel and the WAE team for organizing and inviting me and Walter for the photography, and congrats to Ian!