five college students doing burpees on gravel at 1 am vibes

Guys, in spite of everything that’s happened, I’m having a college experience and it’s absolutely wild.

Me and six other friends from my living community are living in near MIT in a place we’ve dubbed “soft house,” since, well, “soft” sounds like “soph.” IT’S SO GREAT.

Living with six of my closest friends is more fun than I could’ve imagined. We’re all equal amounts dedicated to working and having fun, so we grind out psets on weekends and then party after. It’s great to be surrounded by hardworking people because it motivates me to not laze around or procrastinate by watching Harry Potter for the nth time. On a normal day, there are at least four of us working in the kitchen at all times, with others joining now and then based on their schedules. It’s great since we can take meetings in our rooms and then hang out with everyone else whenever we want.

We also work out together!! One of the guys I’m living with is in ROTC and was assigned some kind of fitness training role, so he started leading workouts for us. The first night I tried, we did it outside at 11 pm, and it was actually incredible. I hadn’t worked out in more than a year, straight up, but now I’m a routine of doing it every night with the others. I love it!! Our large backyard area is really conducive to doing strenuous workouts at ungodly hours and I couldn’t be happier about it.

Occasionally, we do massive family dinners. I’m not usually part of communal cooking because I like having a bit more flexibility, but when we do make things in a big group, it’s wonderful. Last Friday night, we made dumplings while blasting Hamilton and it was honestly some of the most fun I’ve had in months. An amazing thing about this area is that it’s full of college students, which means that at least one person in our vicinity is blasting music on weekends and we don’t have to feel bad about doing the same. 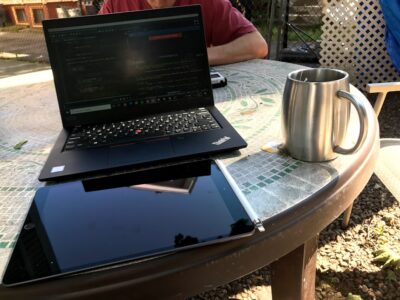 Words can’t express how much I enjoy living in this house. Since I knew my dorm, Burton Conner, would be closed for renovations, I was planning on moving somewhere like this even before COVID hit. But considering everything that’s happened since March, now that this has been realized, it seems like a dream come true. I don’t have a single qualm about being here and I’m beginning to feel like moving back into my dorm when it opens up might be difficult to adjust to…I definitely miss living in a dorm since I was surrounded by so many people, but having space to myself is nice. REALLY nice.

One thing that’s interesting about living in a group like this is having to be organized about meeting everyone’s needs. Our meeting for the chore division established a regimen that mostly worked for a couple of weeks, but some people started taking on the burden of cleaning communal spaces more than others, so we had to sit down again and have a discussion. We also have to have semi-regular house meetings to talk about things like our stances on having people over, since some people are comfortable with it if the guests have been tested, while others are in favor of keeping contact just to people in the house. We’re getting better at working things out, though. Sometimes, when things are contentious, some of us pull up to house meetings with agendas, which is kind of hilarious to think about; you can really tell when people are exec members of various clubs.

Living in a house is entirely different from living in a dorm. For one, you’re in closer quarters, so you learn more about your roommates than you ever would if you were just sharing a suite. You also have to operate as a unit, so there’s a lot more centrality in decision making. It can be stifling at times, but I mostly enjoy it.

Being here is such a blessing. There’s always someone to go to Target with me, or to go work in the nearby park with me when the weather’s nice, or to drink/spill tea with me in quick breaks between classes. Last year, I had a much more diverse set of interactions with people, but given the circumstances, I’m having a great time spending the majority of my day with the same group of people. Sophomore year is HELLA rough and I don’t know how I’d survive it if I weren’t living here.