this is and is not a metaphor

I have a sourdough starter! His name is Aulus.⁠01 a Roman first name of disputed etymology, like most Roman first names, but thought perhaps to come from the verb <em>alo</em>, to feed, nourish, and develop. This is also where alumni comes from, since they are those who have been nourished by the university.

(Me: “Mom, if you were my sourdough starter, what would your name be?”

My mom: “Shuli, obviously. That’s what I name everything important.” 🥺)

I realize it’s not exactly a novel hobby, in certain circles, to have begun a sourdough starter during tHeSe UnPreCeDenTeD tImEs. Nevertheless,

It turns out that having a sourdough starter, like having a pet, is very good for me. But also a bit tricky.

For the first week, I was just feeding him the regular flour we use for everything else. Every morning, I would wake up and come down to check on him. There would be some bubbles. I would add flour and water, carefully, using our kitchen scale. Over the next few hours, there would be more bubbles. But, he never rose! I read so many articles on sourdough starters. Sooooo many. And they all seemed to imply that it should be rising. Aulus and his growth, or lack thereof, occupied all my thoughts.⁠02 this is a good thing, since there is not a lot else enjoyable to think about right now I said, maybe they’re just exaggerating. Maybe it’s OK if it doesn’t rise? After all, they also say there should be bubbles. And I have bubbles.

But after one whole week of no progress, I had to face it: my baby boy wasn’t special and proving all those articles wrong. He was struggling. I had let my pride for him and his bubbles overshadow the fact that he truly needed help.

So, I made some fake sourdough bread (you add yeast so that it actually rises, although admittedly mine didn’t rise quite as much as I would have wanted). It was delicious! But it wasn’t really sourdough. I decided that the issue was with the flour. Mine was bleached, aka, some part of the wheat had been removed. It turns out, the part that’s removed is the part with all the yeast that’s supposed to be, you know, making the bread rise. Oops. 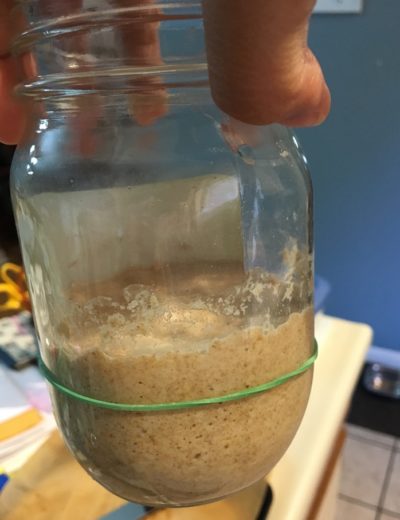 I switched to whole wheat. Another week of patiently feeding… but this time, rising!!!! And to be honest, totally different looking bubbles. Those earlier bubbles were fake. I was so happy — but I was so nervous. Was he too cold? Did he need to be warmer? I tried different setups to keep him warm. Was he too warm? Did I need to cycle my heating lamp on and off? He grew, but then he fell quickly. Was that too fast? Did it indicate something was wrong?

And look at this beautiful, beautiful bread:

Idk, man. Sometimes you think you know what you need… you’re making progress… you’re paying close attention and doing everything you can… but you start to feel like you’re stagnating. Sometimes, you have to really reflect on what nourishes you and what only fills you up. Sometimes, you have to make a big change in order to grow. But you should always have faith: you will succeed. And then you’ll be delicious 😋😉