Teach ‘til you drop, then draw the Mona Lisa while blindfolded. by Anna H. '14

1330 hours of classes. For those of you who can’t instantly divide numbers by 24 in your head, that’s 55.4 days. That’s nearly two (non-leap year) Februaries.

Before I go on, I need to comment: this was the day of the Doctor Who 50th Anniversary Special release, and Splash was overrun by Doctor Who fans. I was wearing earrings that said “wibbly wobbly timey wimey” and my audiences were littered with sonic screwdrivers and Tardis t-shirts. I managed to slip in a reference during one of my classes, to thunderous applause.

My first class was at 10am on Saturday. I showed up at 9:40 (we’re supposed to arrive half an hour before our first class – sorry, ESP admins) and received a hard copy of my schedule for the day.

Here is a Google calendar representation. 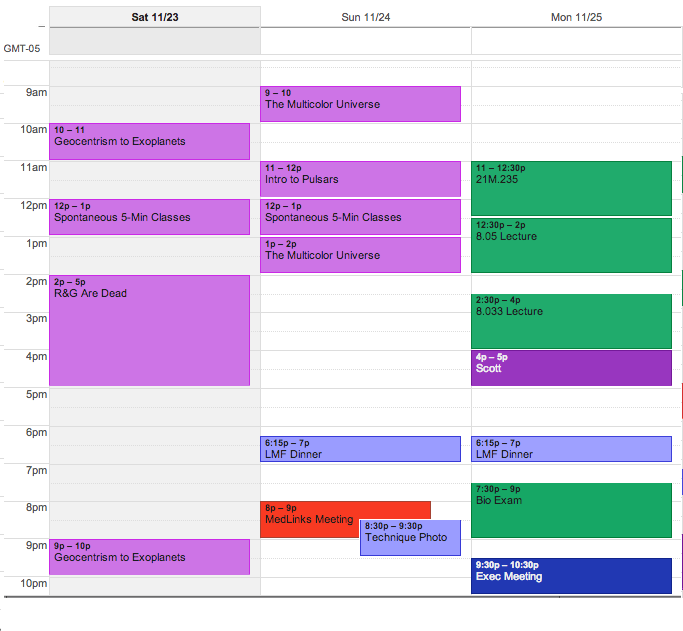 Note that I had a biology exam Monday night. Good life choices, Anna!

As you can see from the schedule, I taught most of my classes in 26-100, which is MIT’s biggest lecture hall. Movies are shown in there. The 2013 Ig Nobel Prize lectures were held in there.

It was totally surreal to lecture where Eric Lander lectures. It was also totally surreal to try and 1) turn on the lights and 2) make the projector system work, because despite 26-100 being a gigantic lecture hall, nobody thought to make these systems usable by the average human. I spent about ten minutes running around looking for the light switch, then ten minutes running around looking for the right plug (THERE ARE SO MANY PLUGS AND CORDS IN THAT ROOM) and then it was already five minutes into my class so I had to give up. I called ESP security (the team of MIT student volunteers who really make Splash go) and they sent help while I improvised a non-Powerpoint version of the beginning of my class. (Those 5-min improv classes came in handy!) Emily T. ’15 came in and magically found the light switch, and Ian M. ’14 magically made the projector work.

ESP SECURITY: I LOVE YOU SO MUCH. THANK YOU.

Geocentrism to Exoplanets was about the progression of humanity’s understanding of our place in the grand scheme of things. We started in the modern era of astronomy, and I presented some of the most recent highlights of exoplanet science. We then took a big step back to 1923 (when Hubble discovered that there are in fact other galaxies) then another big step back to the discovery that the sun is just another star, then even further back to 16th century Poland, where Copernicus was writing to suggest that the Sun and not Earth is at the center of the universe. With that context under our belts, we returned to exoplanet science. I talked about the first discovery of exoplanets (which entails talking about pulsars, which I’m always very happy to do) then showed examples of exotic planetary systems that have been discovered: the Tatooine-esque binary star system, for example, and the planets that share an orbit.

Spontaneous 5-Minute Classes on Whatever You Want was exactly what it sounds like. I wrote about it here. As expected, there was a good twenty-minute period before class started when I had an existential WHY DID I SIGN UP FOR THIS? crisis, but the class itself was a resounding success and everyone had a blast. Davie ’12 and I managed to procure a bunch of miscellaneous props (a foam sword, a beet, and a sheepskin, among other things) and the kids were all too eager to suggest ways for us to publicly humiliate ourselves.

Here were some of their submissions:

Yes, “how to pick up chicks” was submitted several times. Ah, High School.

Davie got “Elephants,” “Colors – How do they work? (why do they exist?)” and “How to be a sloth.” He also combined “The Architectural styling of I. M. Pei,” with “Murder (any insight on topic)” to deliver a fantastic 5-minute class about how I. M. Pei’s buildings could kill you.

I got “The banana and how it changed history,” “How to swordfight,” and “How to pick up chicks.” I pulled out the random foam sword that we had lying around, got a volunteer from the audience (he happened to be a fencer) and taught them all how to fence foil and sabre (Thank you, MIT PE!) For “how to pick up chicks,” I did some quick thinking then said:

“So, I actually have a lot of personal experience picking up chicks.”

Cue gaping. I noticed that one girl had her iPhone out, and was filming me. Great.

“In fact, I picked up a lot of chicks while I was in elementary school in Singapore.”

“I did it in the local science museum.”

I really enjoyed drawing out the silence between my sentences.

“There was an exhibit – an incubator, and in the incubator there were chicken eggs waiting to hatch. When the chicks hatched, the museum attendants let you pick them up.”

Laughter. One kid yelled, “I SEE WHAT YOU DID THERE!” and I got a round of applause. I continued with my cop-out, explaining the delicate art of how to pick up a chick without strangling it.

During our second class session, we had about three times the number of kids (from ~40 to ~120) so I’m not going to write up all of their submissions. I received something like “Tell us all about the trombone” – I played the trumpet for eight years and had plenty to say about brass instruments. I also received “Black Holes,” which was totally cheating since I’m an astrophysicist. I guess the universe thought I had it too easy, because I then got “How to draw the Mona Lisa blindfolded,” which of course had to involve drawing the Mona Lisa on the chalkboard while blindfolded. Here is the real Da Vinci painting: 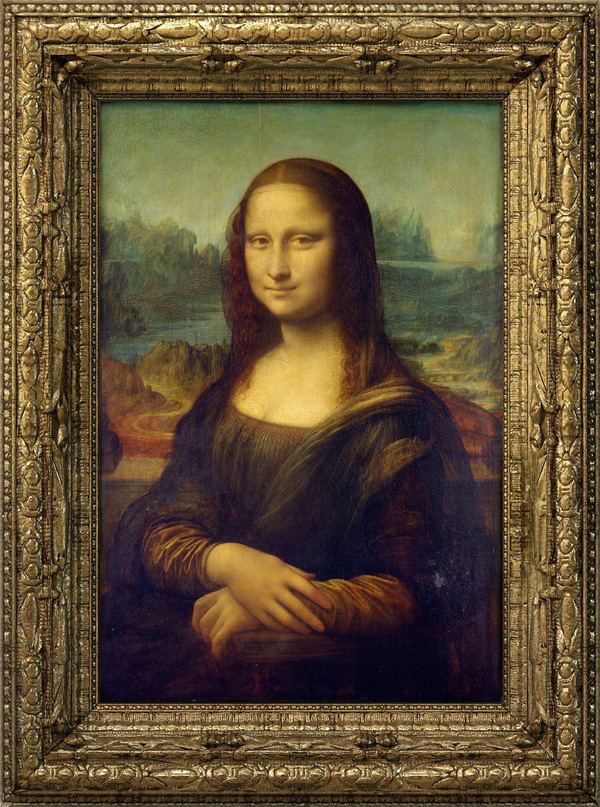 Here is my blindfolded chalk drawing: 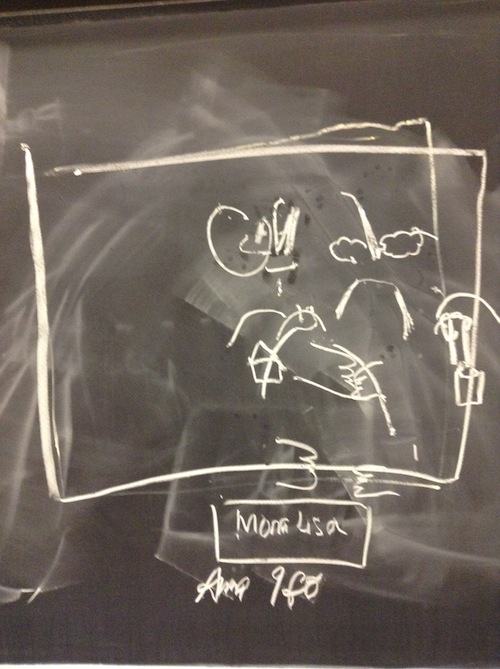 I’d say I got it pretty close.

Dramatic Reading: Rosencrantz and Guildenstern Are Dead was also exactly what it sounds like. Eight high schoolers, Davie ’12 and I did a full reading of Tom Stoppard’s play. We modeled it after MIT’s literature department’s annual marathon, which brings together a group of students and professors to read a play in its entirety. At natural breaks, we switched up roles, so that everyone got to read about an equal amount. This drew a very different crowd from my astronomy classes.

The Multicolor Universe was a class that I’ve been wanting to design for a long time. Essentially, one can do astronomy at every wavelength of the electromagnetic spectrum: x-ray astronomy, infrared astronomy, ultraviolet astronomy, etc. I happen to do radio astronomy, but am hoping to broaden out in graduate school. Here’s the first slide of my class: 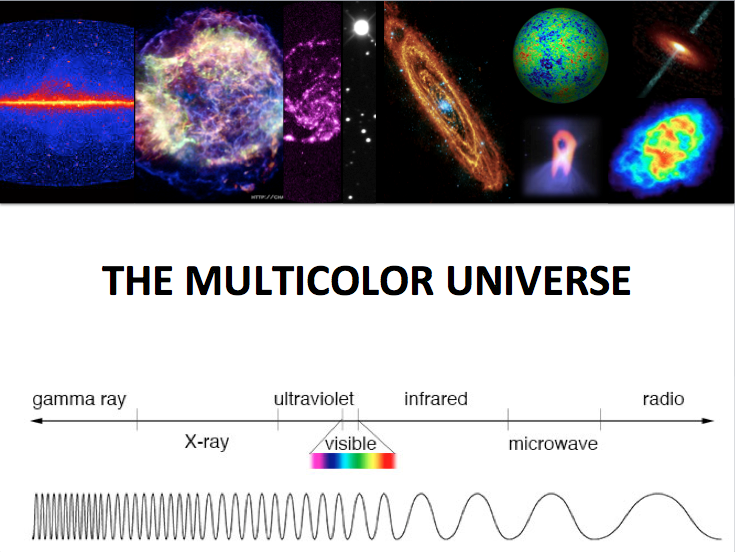 And the second slide: 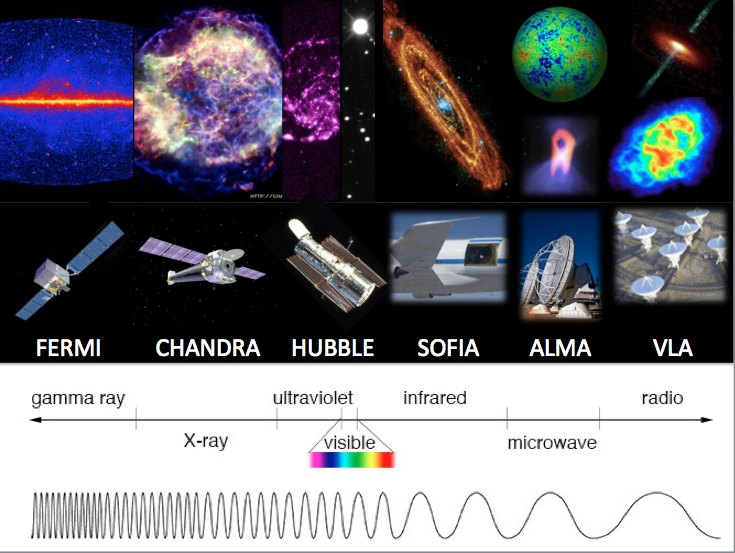 We talked about the different kinds of objects and phenomena represented by different parts of the spectrum (ex. warm gas and dust in the infrared, gamma ray bursts in the gamma ray, black holes in the x-ray) as well as the different instruments and telescopes used to collect that data. Some are ground-based, because some parts of the spectrum make it down to Earth’s surface, but others must be space-based, because the atmosphere blocks dangerous wavelengths like gamma rays from frying us.

In between classes, I hid in the library and frantically taught myself about lymphocytes, antibodies, the cellular and humoral immune responses, familial hypercholesterolemia, mouse chimera, oncogenes and tumor suppressor genes, viruses, why vaccines work (memory cells!!!), and single-nucleotide polymorphisms. I had my biology test last night, and I think it went fine, despite the weekend’s chaos.

I’ll finish with some special moments.

This was a very special weekend.