THIS IS SO EXCITING I THINK I'M GOING TO CRY

I’m sitting on a JetBlue flight from San Francisco to Boston, listening to the Prince of Egypt soundtrack (Hans Zimmer AND Stephen Schwartz. Oh my goodness.) The couple to my left don’t speak much English, but seem very nice; the lady offered me one of her crackers.

We’re flying over what I initially mistook to be stiff clouds, but which turned out to be very impressive snowy mountains. I have zero geographical awareness of Mountains In The Continental United States, so I stopped a random woman walking down the aisle and asked if she knew where we were. She looked a little affronted, and suggested that I ask the stewardess.

I stopped a stewardess, who had “YOLO” written on the back of her notepad. “Oh,” she said, “I think they must be the Rockies.” I thanked her, but before she had the chance to escape, the man across the aisle from me (who has a very bright yellow bag tucked under the seat in front of him – it looks like it’s made out of the same material as those HI I’M HERE PLEASE DON’T HIT ME cyclist jackets) took out his earbud and asked whether I was asking about the mountains outside. I said yes. “Those are the Sierra Nevadas,” he replied, with sort of a snooty glance at the stewardess. “We’re not far enough to be over the Rockies.” He then explained that the Sierra Nevadas run along the northern part of California, that they’re shallow on the west side and “very jagged” on the east side, that this is where Yosemite is. I thanked him.

Now that I’m done chatting with my neighbors, it seems like as good a time as any to crank out some thoughts on the past week.

First, some background. Over the summer, I did astronomy research at the National Radio Astronomy Observatory (NRAO) headquarters in Charlottesville, Virginia, through a National Science Foundation (NSF)-funded program under the Research Experience for Undergraduates (REU) umbrella. It was a great success: I found a new pulsar and baked a really cool cake. I had another project, though, which I didn’t talk much about in previous posts. Essentially, I worked on a new way to obtain precise “rotation measures” for each millisecond pulsar (MSP) in the globular cluster Terzan 5. The “rotation measure” describes how much the linearly-polarized component of the pulsar’s signal rotates on its way to Earth, due to the Milky Way’s magnetic field. I managed to get much better precision than the current software, which is awesome, because the eventual goal is to get the value for each MSP in the cluster and then have fun comparing them and playing with physics.

I had the opportunity to present those results in poster form, at the American Astronomical Society’s annual winter conference in Long Beach, California. MIT and the NRAO split my travel, hotel, and living costs, which – well, you can imagine how awesome that was.

In preparation, I made my poster, and poked around for contact information and advice. I chatted with my supervisor from the summer and my current UROP supervisor, who all gave me suggestions for how to make the most of the event. I also got a list of names from Dumbledore, of MIT alumnae-turned-astronomers at various institutions. I e-mailed all of them; a few weren’t at the conference, but offered to chat with me via Skype, which was nice. A few were in the area at the time; one arranged to meet me for coffee since she was at the AAS anyway, one drove down from Caltech to meet me (which blew my mind) and a few didn’t get back to me about meeting in person, so I ended up hunting them down in the big poster room through a combination of nametag-scanning, facial recognition (I stalked them all on the Internet beforehand) and luck. I have now mastered the art of shaking hands.

While chatting with an astronomer who works at the American Museum of Natural History (AMNH), some random stranger came up and slipped a card into my hand. Bewildered, I looked around for an explanation, and the AMNH guy told me that the card was my invitation to the big party happening on the last night. More on that later.

For now, let me show you the hotel: 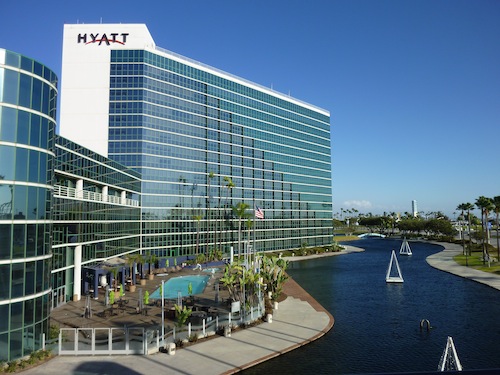 SO MUCH BLUE SKY. Yay!
When I arrived, I
1) Checked into my room, and
2) Realized that I left my crutches on the airport shuttle (NOOOOOOOOOOOO) and called the shuttle company, only to be told that the crutches weren’t on the bus. Um. LIES. Definitely lies, since the next morning they had been returned to the hotel front desk. Whatever. Anyway, the view out my window: 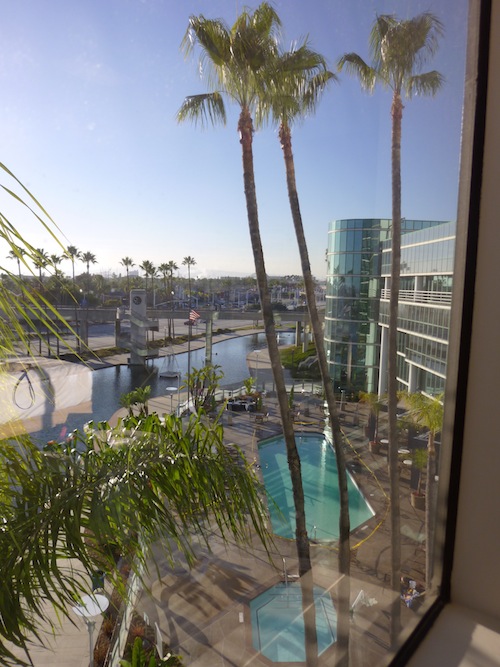 After resting a bit, I limped down to the lobby to take advantage of the free wireless service (not available in rooms, unfortunately). A few minutes after I arrived, a guy walked in holding a poster tube, and I figured I ought to make a friend.

Me: Hello! I guess you’re here for the AAS?
Guy: Yes, but this is actually my student’s poster; I’m just hanging onto it for her.
Me: Oh, a student? Are you a professor?
Guy: I direct the Harvard REU summer program.
Me: OH! I’m applying there!
Small world. Small hotel lobby, I guess. We proceeded to bond over being from England, and he shared his thoughts on how to pursue joint research-public outreach interests. That was the first of many new connections and friendships, the making of which I became convinced is the primary purpose of a conference like this; a few days later, I went out to lunch with him, an MIT alum, and all of the Harvard REU alums who happened to be at the AAS. It occurred to me sometime towards dessert that I’d never actually been to the Harvard REU; no one seemed to notice or mind.
Back to the conference center: 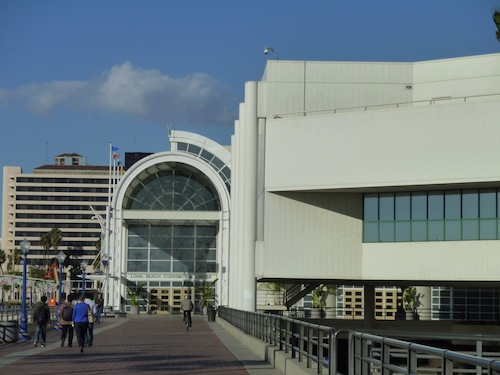 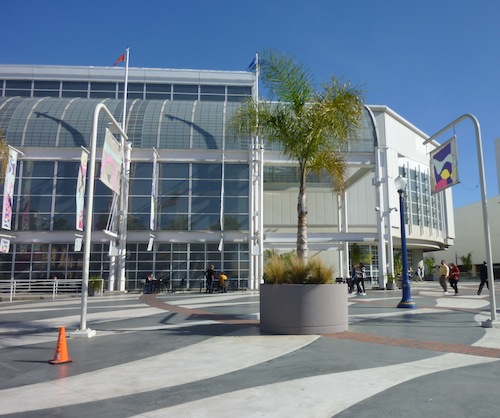 There were 3,000 astronomers in there, which became apparent the instant I walked in. For those of you who don’t know anything about the astronomy field – that’s a pretty significant percentage of the population. While standing in line for my registration badge, I met a helicopter medic / amateur astronomer, and an astronomer at the Space Telescope Science Institute.
I presented my poster on the first day of the conference. 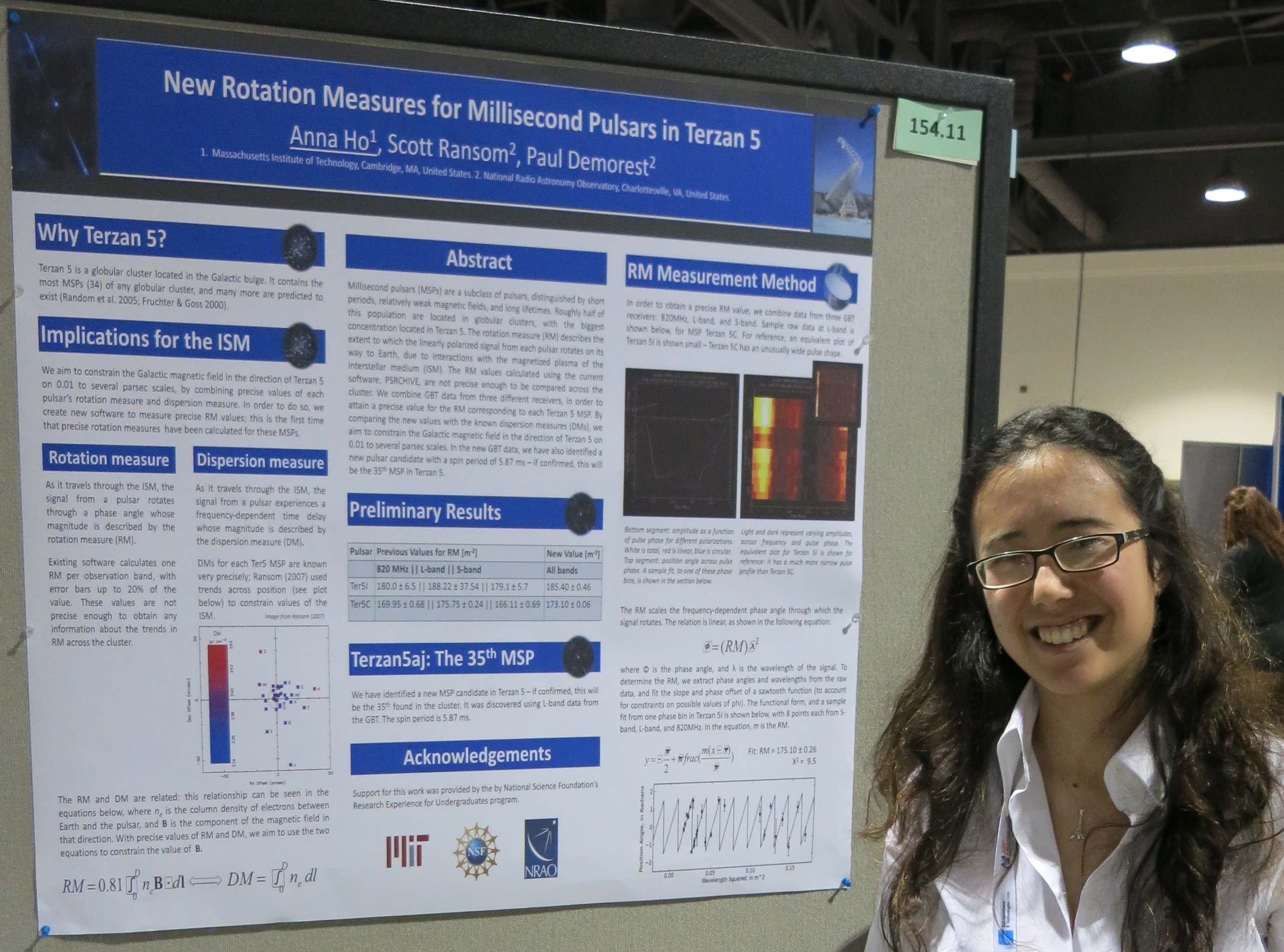 Yes. I can’t tell you how much it meant to me to feel so welcomed. People were interested in my research, in me, in my interests, but also in just hanging out with me. Through conversations with professors and other undergrads and some grad students, I reinforced my new-ish desire to go onto graduate school and get my Ph.D. in astronomy. I sent a very happy e-mail to my mom, and she said “That’s wonderful! How you feel about your colleagues near and far is REALLY IMPORTANT in my view.” So – let it be known: I LOVE MY COLLEAGUES. and my old friends, and my new friends.

I’ll be back next winter.