I think I spent them well.

My summer internship ended on Friday, August 17. Today was the first day of classes. I therefore had eighteen days’ worth of summer to spend.

Actually, I take that back. Two of those days were taken up by a wedding (turns out I’m That Person Who Cries For The Entire Ceremony), eight of those by associate advising and freshman orientation responsibilities (including an awesome evening of teaching that I will post videos of soon), and one by class registration/textbook shopping/pre-semester club meetings. That’s not to say that I didn’t absolutely love every second of the wedding, and the advising, and the teaching (I really did) – but in my opinion, one of the magical characteristics of SUMMER that distinguishes it from THE SCHOOL YEAR is that my calendar looks blissfully white and empty.

During the school year, my calendar looks, to quote my friend: “like a clown threw up on it.” You get the idea. There are classes and clubs and psets and tests, and even when there’s nothing specific “scheduled” I get this looming feeling that there’s something I ought to be doing. That’s not to say that I never have time to do fun stuff – but I have time to do fun stuff because I believe it’s important to make time for fun stuff, so I schedule it in.

Essentially: there are no empty calendar days during the school year. But those seven days at the end of the summer: white. I could wake up in the morning and think: “what do I feel like doing today?” and then do it. The rest of this post has nothing whatsoever to do with MIT life. It has to do with the non-MIT life: the pre-MIT life, the between-MIT-semesters life, the free time commodity. Here’s how I spent it: with my grandma (who likes Hilbert Spaces), hiking and ziplining through the Maine mountains, at a Renaissance Fair, and roaming Boston with two very old friends.

With my grandma, who likes Hilbert Spaces

During and for the few days following the wedding, I lived with my grandma in her Manhattan apartment.

My grandma is awesome. She is a retired math professor, who was willing (and had enough faith in me!) to give me a calculus lesson when I was nine. She still takes and teaches classes (one of her most recent classes was a multidisciplinary course on the concept of infinity, as expressed in mathematics and in poetry) and is one of the sweetest, most intellectually active people I know.

In the days following the wedding, after the rest of my family left, she took me out to lunch and dinner, made me breakfast (despite my insistence that she really didn’t have to do that) and took me out to get a pedicure (my toenails look pretty now!) I told her about pulsars and she told me that she likes Hilbert Spaces. My grandma likes Hilbert Spaces. My grandma knows what Hilbert Spaces are, period. In sum: she’s the best ever, and I’m glad I got to spend some time with her :)

From my grandma’s flat, I took a train back to Boston, where my friend Stephen picked me up. Stephen’s the guy we made the epic galaxy cake for; he lives in Maine, and invited friends to go visit at the end of our NRAO internship. It turned out that I was the only person who could make it, but a few of his extended family members were there, too, so it was still a party.

Maine is stunning. Stephen gave me and a couple of visiting family members a tour of Portland – 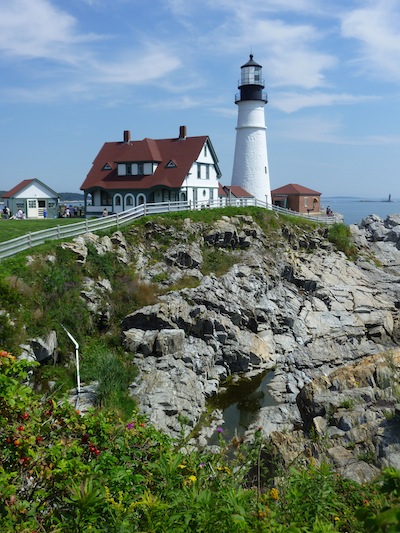 The Portland lighthouse. All I could think about were pulsars. 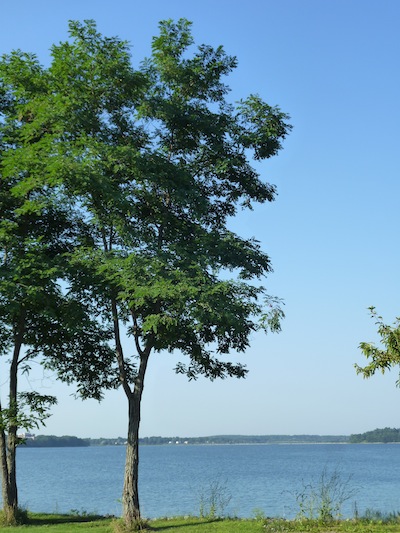 Elsewhere in Portland. I don’t actually remember where, exactly. But it was beautiful!

We also took a zipline tour. A ZIPLINE TOUR! As in: touring the gorgeous Maine mountain scenery BY ZIPLINE! Zipline is the way to travel, let me tell you. I even managed to zipline upside-down on my last attempt, although I never quite got the backflip-off-the-platform down (I tried!) 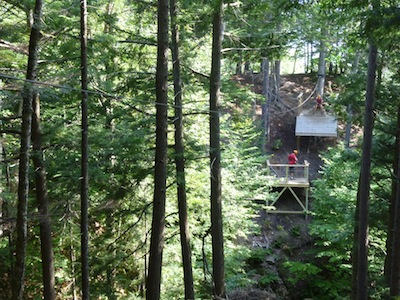 The general idea (it was hard to get a good picture, sorry) – basically, you clip into that rope, glide through trees and across drops and over streams, whoop a lot, and thank your lucky stars that you aren’t afraid of heights. 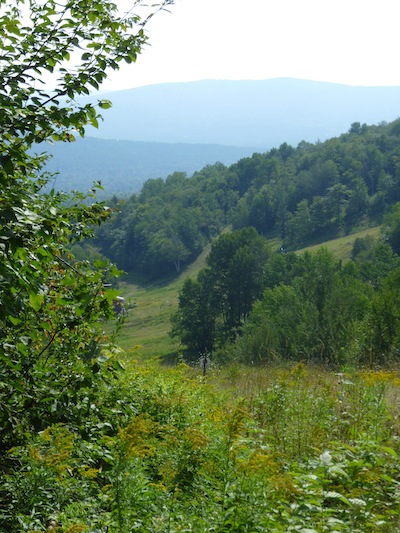 I took this picture while waiting my turn on Zipline #4 of the tour. I ended up doing this one while spinning – the tour guide wound up the rope, and as I ziplined across, I unravelled. 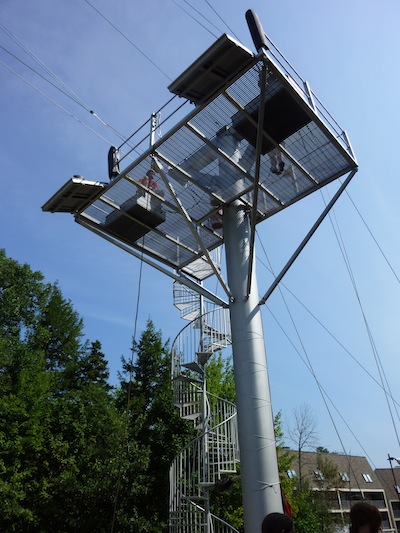 The last zipline course on the tour: the super-tall, super-long one. The one I did upside-down. It was awesome. 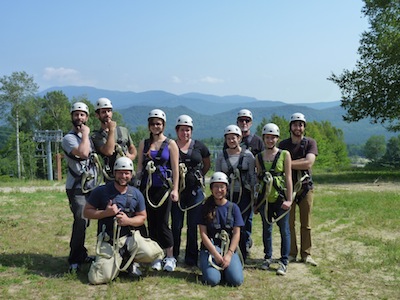 The zipline tour group – I’m kneeling in the front. Turns out that ziplining is a really good bonding experience.

Other Maine adventures included stargazing, a baseball game, a shooting lesson, and a trip up to a ski resort, where we went hiking. I discovered that 1) I’m a pretty good shot, 2) I like revolvers better than Glocks, 3) I have very little arm strength – and rediscovered my love of fresh air. 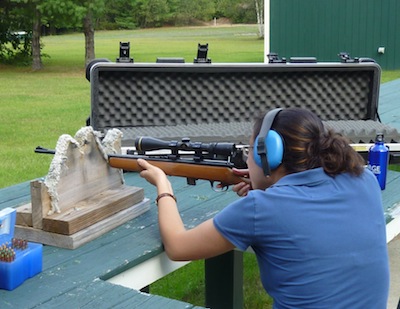 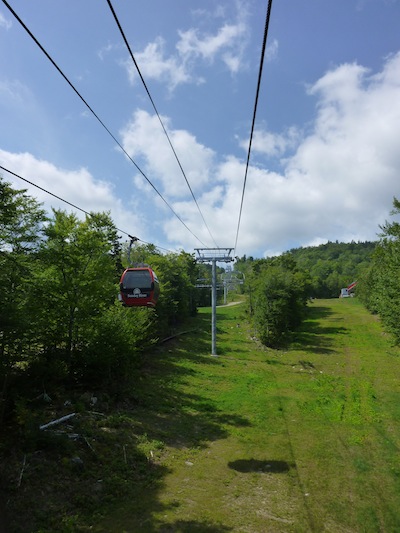 The ride up to the ski resort. My first chairlift! It was SO excited. I think I took as many pictures while on the chairlift as I did during the hike. Forgive me – I grew up in a city, okay? 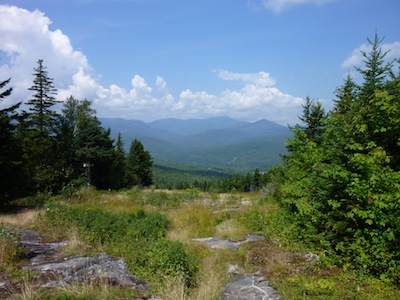 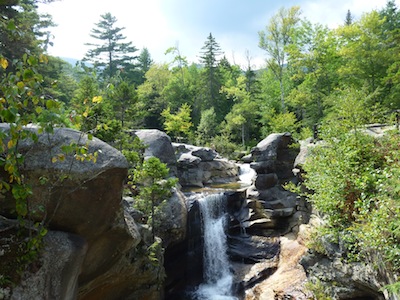 Stephen drove me back to MIT, where I unpacked and braced myself for a week of orientation madness. I won’t talk about that here, though, because this post is about the totally relaxing non-MIT parts of my late summer adventures.

If you haven’t been to a Renaissance Fair, no words can really do justice to how otherwordly it is. For a day, I was a princess roaming around a (quasi-) Renaissance village, watching jousts and being greeted “good day, milady” by random people. I will let pictures do the rest of the talking. 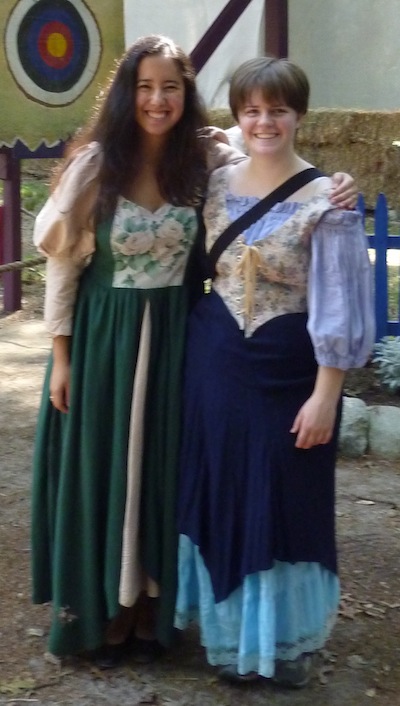 Me and Caitlin at the beginning of the day, just after renting our costumes 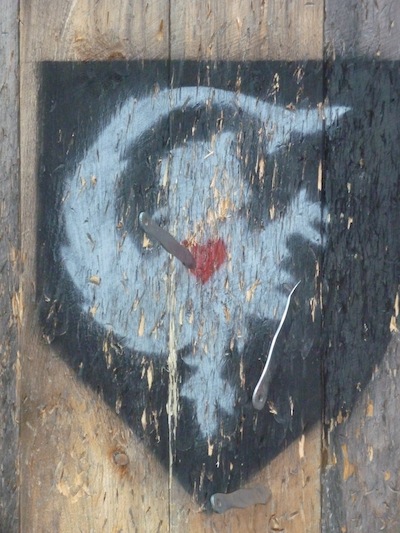 First stop: knife-throwing. Apparently I’m a natural, or something. I got a certificate that says that I am now to be called “Lady Anna” – take heed! 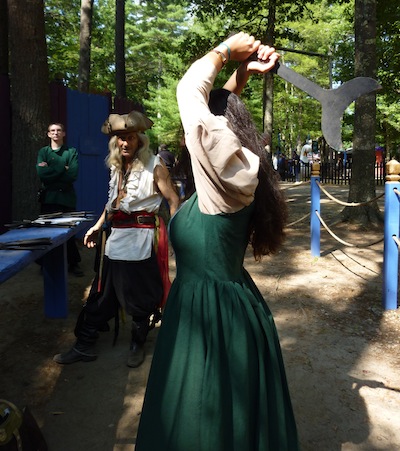 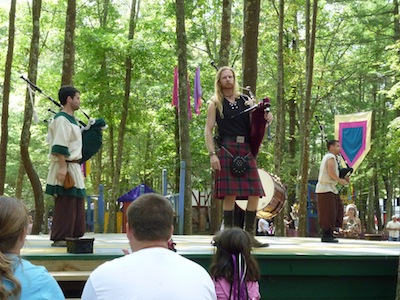 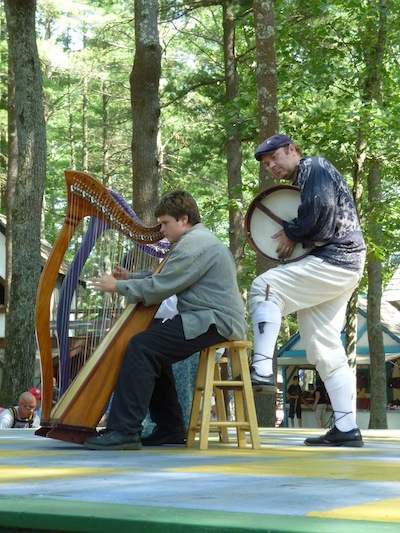 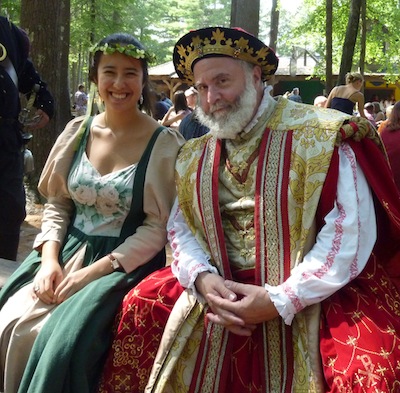 Turns out that King Richard is a pretty cool guy, who has A Thing for harp concerts. 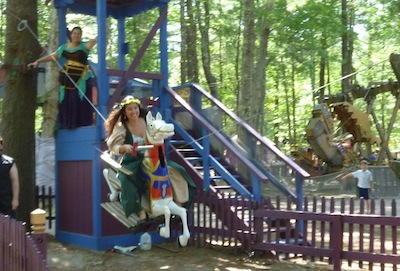 Why, yes – I AM jousting on a zipline, with a foam sword. I hear princesses used to do that. 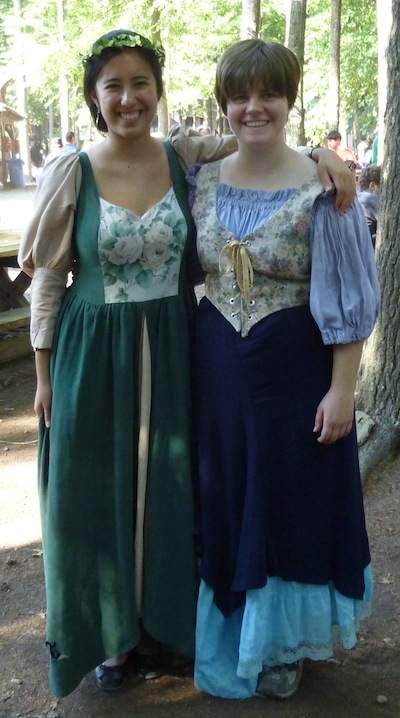 Me and Caitlin at the end of the day – sometime before then, I acquired a leaf headdress thing, and Caitlin acquired elf ears (which are unfortunately covered up by her hair – trust me; they’re awesome.)

I also learned the full details on how to jumpstart a car, since Caitlin and I returned to our rental vehicle only to discover that it had run out of battery.

I went out to dinner – and took an hour and a half long walk – with two friends from London. One I’ve known since fifth grade; he’s been my bff for a gazillion years. His family live in Cambridge, now, so fortunately that means I get to see him regularly. I hadn’t seen the other friend in about seven years – we were friends at the end of middle school and freshman year of high school, but he moved and we didn’t really keep in touch. It was a nice little reunion – and it’s always comforting to see old friends.

Actually, I find that to be the most relaxing way to spend an evening right before a college semester starts: hanging out with friends who knew me WELL before I even knew what MIT was – as Anna H. and not Anna H. ’14, the MIT student.

Today, summer disappeared and I had my first day of classes. I’ll tell you more about those later – I have some rough times coming up, in the form of the notorious Junior Lab. I’m excited, though. I have a research project in the astrophysics department, teaching and public outreach, new astronomy friends at BU, a new career plan, a BIG NEW ROOM, two new plants  – and lots of impending blog posts to tell you all about them.

That’s it for the entirely-not-related-to-MIT-life stuff for a while, though. The semester has begun! Welcome back.