thoughts from the bay area

i. my first extended stay in the san francisco (henceforth abbreviated as sf) bay area was last spring, when i lived in the city, specifically in the nob hill district near downtown. i didn’t know much about sf at the time, so i learned a lot – every time i wanted to visit a new district in the city, i’d read up on that area’s developmental history until i felt like i understood its general feel. i learned how the soma district is confusing to navigate because a silly surveyor decided to align it with a road 45 degrees offset from most of the city, how hunters point has heavy contamination from radioactive testing at a navy site that was never cleaned up properly, how the government tried to relocate chinatown to free up valuable land near downtown but stopped because they were afraid of upsetting the chinese government, and so on

ii. of course, any exploration into sf’s development must eventually touch on its ongoing housing and homelessness crises. this is an expansive and very complicated subject that i don’t think i’m qualified to write about in detail, so i will try to give a concise summary based on my understanding of the topic and link you to some of the articles i’ve read

space in sf is fundamentally constrained by its position at the 7 mile x 7 mile tip of a peninsula. furthermore, the city enacted strict regulations in the 1960s, such as banning buildings more than four stories tall in most places and making it easy for neighbors to block construction projects. cheaper forms of housing actually decreased in quantity over the late 20th century because tens of thousands of smaller properties such as sros were demolished and replaced with larger apartments that housed fewer, but more wealthy, tenants. finally, the movement of tech companies to the bay area has resulted in a large influx of upper-middle-class tech workers. the result of all these factors is rapidly rising housing prices and widespread gentrification, with many working-class sf residents being priced out of the limited supply of housing

it has become common to see tents on sidewalks in arbitrary streets, especially in the denser and lower-income districts of sf such as the tenderloin. one of the newer policies the government has been trying out is designating blocks of the city as supervised campsites. on one hand, i am glad that the campsites exist, because they make the streets safer for pedestrians and traffic while making survival easier for people experiencing homelessness. on the other hand, it is incredibly sad that these measures are necessary to begin with 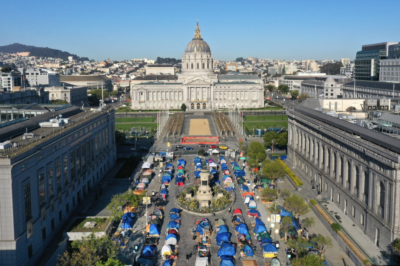 iii. in may i was hanging out with one of my friends at school. we walked through an area around central square that was undergoing rapid development and gentrification largely as a result of being near campus, so i pointed that out and mentioned that the same would likely be true of whatever area of new york they moved to after graduation. and then my friend, usually one of the most empathetic people i know, said well, that sounds bad for the people being displaced, but it won’t affect us, right?

i wasn’t expecting a statement of such blatant disregard and didn’t know how to respond to it, so i mumbled something about how it would affect us in the form of increased crime and homelessness rates. i don’t think that was very convincing though, and for a long time afterwards i wondered if i could’ve said something more persuasive

iv. a few weeks ago i visited salesforce park with a friend. we got into the elevator and saw a man already waiting inside. he looked disoriented and appeared to not be having a good time in general – for instance, he had trouble staying upright and didn’t seem to understand how to use the elevator buttons. the man pointed at my friend and said you a queen, and then he pointed at me and said you a n*****, you a black man

i subscribe to the belief that people are usually mean to others because of personal distress or suffering that they aren’t able to properly resolve. so when the man said you a n*****, i was disturbed, not because i felt personally insulted, but because i wondered what he was experiencing that made him feel the urge to say that

of course, there could’ve been any number of reasons for the man’s behavior and i’ll never know what the real reasons were. perhaps he was mentally unstable or hallucinating. perhaps he had a long-standing grudge against people who look chinese. perhaps it was something as arbitrary as him not liking my clothes or backpack or hair. there is another potential reason i want to highlight, not because i think it is the most probable one, but rather because it relates to an issue that has been bothering me for the past year – that issue is the growing divide between the tech world and everything else

some long-time sf residents hate tech workers for the changes they have wrought on the city. internet discourse on sf is littered with comments like this one, where an sf native on quora explains how he takes comfort in the possibility that tech newcomers might be beaten up while walking around at night; a few years ago there were widespread protests against google busing employees between sf and the office every day; and so on. i think it is difficult to fault these people for reacting in this way, because tech has objectively made many of their lives much harder. this is maslow’s hierarchy of needs at work – i can say as much as i want about emotional or cognitive health and the importance of approaching strangers with openness, but all that matters very little for someone without physical or economic security. so if i had to guess why the man called my friend a queen and me a n*****, resemblance to tech worker stereotypes would also be one of my guesses in addition to all the obvious ones

v. here is what i wish i had told my friend. but it won’t affect us, right? they asked

to which i should have said: even if you never have to live through it yourself, you’ll be watching people around you suffer every day. and even if you don’t mind seeing people suffer, you’ll still face the problem in a hundred other ways. you will experience it as a city that blocks your buses and despises your appearance and prays against your safety. you will pay for it by living in a world that hates you

vi. i am an undergrad at mit, and it is a foregone conclusion that most of my friends will move to the bay area or new york after graduation to work in generic b2b sass tech and quantitative finance roles. i don’t want to dismiss these jobs as useless, but they’re definitely much lower impact than the kinds of problems mit students could be solving with their intelligence

the charitable take on this is that my friends have found a way to decouple life from work, and are pursuing income-maximizing jobs so they can focus on improving their actual lives. the uncharitable take on this is that they have not found a problem they are more passionate about than the accumulation of wealth. of course i am generalizing and simplifying, but i think both of these views are true for the most part

i have known about the relative wages of different jobs for a few years, but i still cannot wrap my head around how my classmates and i can make so much money sitting in front of computers and producing essentially nothing of value while other people work long hours and still cannot afford basic shelter. and i mean “nothing of value” quite literally – two years ago i was at faang building a product that has mostly gone unused; last year many people i know did trading internships that, in their own words, amounted to playing a series of betting games; and this year one of my friends worked 30 minutes a day in a full-time role at bloomberg while getting good reviews from his manager

vii. several people, living in different cities in the us, have told me that it is common to hear locals in their area compare the influx of new tech and finance employees to an infestation of bedbugs. i dislike this analogy, because i think it is unnecessarily dehumanizing and misleading. the comparison i prefer to make instead comes from the great gatsby:

“They were careless people, Tom and Daisy — they smashed up things and creatures and then retreated back into their money or their vast carelessness or whatever it was that kept them together, and let other people clean up the mess they had made.”

sometimes this is how i feel about myself and my friends – hiding behind wealth, apathetic towards the world, upending lives without noticing. basically every high schooler in the usa is required to read the great gatsby and most of them come out of the experience disliking tom and daisy, but i worry that somehow, only a few years out of high school, we are forging an entire class of adults in their image

unfortunately i have no solutions in this blog post, only complaints and laments. i wish i knew how to solve the absurdly complex problems of macroeconomics and wealth inequality. and just as much as i wish i could solve systemic problems, i also wish i could better affect the people i see every day. i wish i could pull tom and daisy out of their vast carelessness, and i wish i could pull the man in the elevator out of his vast suffering