some thoughts at the end of the semester

I’ll be honest, I lost track of time somewhere around the end of March; I feel like classes started really ramping up, everything started happening all at once, I started getting overwhelmed. I remember being surprised at it being April, now, it’s the middle of May, and it seems like no time has passed. At the same time, all my energy from the beginning of the semester has dissipated, and not even the good weather can replenish it. All I want to do is lie in the sun and read a book, but… finals.

With the end of the semester coming up, I’ve been reflecting a lot about being on campus, and my freshman year in general. I don’t really have any coherent thoughts, yet. But in this moment, I feel a lot of resentment for the situation, more so than before. Now that the end – of the pandemic, of this weird in-between state I’ve been inhabiting – is basically in sight, it feels worse. Or maybe it’s because the novelty of actually being on campus has worn off. Or maybe it’s just because I’m burnt out at the end of the semester, stressed about grades, annoyed at myself for taking too much on, worried about not getting the opportunity to rest enough before I dive into my summer plans, regretful over not socializing as much as I had wished I would.

Either way, it feels terrible. Yeah, it’s nice to be on campus. Really nice. But the longer I’m here, the easier it becomes to picture what it should be. What my freshman year should have been. I often compare the 24’s to the 23’s and wonder who had it worse. I’m jealous of the 23’s for having at least experienced a normal freshman fall, for having had time to form friendships and find communities in person. But one argument that had made me feel better is that, hey, at least I don’t know what I’m missing. I’ve never had the “MIT experience.” I’ve read about it, sure, heard about it from upperclassmen, but that’s not the same at all. For me, MIT has just been this: Zoom classes and struggling to meet people outside my pod.

The ignorance has been blissful, at times. It’s too easy to forget, more than a year into the pandemic, that Zoom classes aren’t the norm. My roommate and I have to regularly remind each other that, wait. This sucks. This isn’t how things are supposed to be. Classes aren’t supposed to just be recorded lectures I cram the day the pset is due. Recitations aren’t supposed to be something I play in the background while finishing another assignment. It doesn’t actually normally take this much energy to see friends from other dorms, and wait, people actually eat in the dining hall and not while staring at their computer screens?

It had been easy to ignore, at first, how things are supposed to be, but now that I’m here, I can imagine it too clearly. Walking down the empty infinite corridor, I can imagine it filled with people. I can imagine walking to specific classes. I can imagine having an hour long break between, say 6.006 and 18.600,⁠01 algorithms and probability, two classes I'm planning on taking next semester and sitting on a lime green couch or on a ledge of building-whose-number-I-don’t-know by Killian. I can imagine taking my lunch outside, maybe walking to Starbucks to get coffee, and then sitting in the little courtyard behind the nano building with some friends. It feels so close, and that just makes it feel so much more out of reach.

When I first got to campus in February, the posters from March 2020, the empty classrooms, it all just made me sad, filled me with a sense of loss and longing for something I never really knew. But now I’ve gotten used to the space. MIT has announced a “return to normal” next fall. I’m getting the second dose of the vaccine in a couple of days. I genuinely think things might be okay soon, so I’m letting myself be hopeful for the first time in a long while. And yet, having this end in sight makes it so much harder to be okay with the reality of the current moment. I feel like I finally know what it is that the ’24s have lost this year, and it hurts. I know that it was necessary, and it’s not even that I think MIT should have done something differently. I’m just so, so tired. And sad. 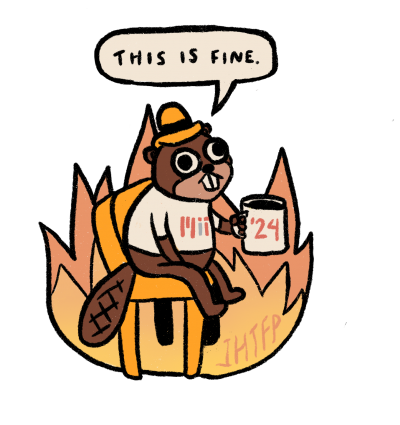 Though this is primarily a sad post, I don’t want to end on such a negative note. The truth is that the end is in sight, and even if that makes things hard right now, at least I have that to look forward to. I’m really, really excited for next semester, and more immediately, I’m excited for the summer. I’ll be spending it in Boston, along with so many of my friends. Plus, the sun has been out more often. Things are looking up.

Hi! I’m Masha (short for Maria, and yes I know it's not actually shorter in English). I’m from NYC, born and raised, though I left a part of my soul somewhere in the outskirts of Moscow, Russia; so I’m excited for Boston winters and maybe actually seeing some snow on the ground (looking at you, New …
Keep Reading