In the past few weeks, I’ve been pretty busy with SCUFFY,⁠01 Support Communities For First-Years ESC,⁠02 Exploring Support Communities and other general freshman orientation/recruitment events. It’s been a lot of fun, but also quite emotionally taxing.

From August 23rd to the 30th, dorms hosted events to introduce frosh to their culture and subcommunities, which was the equivalent of a virtual REX.⁠03 residential exploration, usually what happens in the week first-years get to happens Then, frosh were placed in dorms based on a ranking form they filled out. From Aug 31st to Sep 8th, 2024s explored subcommunities within dorms, which was followed by their placement into a community.

Before SCUFFY began, I spent a bit of time working on Burton Conner’s website, which is a true work of art. I honestly could not be happier with how it turned out…I feel like we captured the memey, spontaneous, chaotic energy of BC perfectly. I’m a big fan of the “testimonials” section and even wrote my own, but decided to not include it in the final version of the website…

burton conner…my god, is she a beauty. from b to shining c, burton conner offers many delights; hilarious people, suites that feel like home, and amenities that will make you positively QUAKE with wonder.

let’s be real though—you can’t live there for a good while, and neither can we. but although we can’t seduce you with descriptions of our mice-infested suites and amenities (which actually are just ok, hence the renovation), we can tell you about the culture and history that were created within them.

BC is home to nine vibrant communities that, ever since leaving MIT earlier this year, have found ways of staying together. we’re passionate about maintaining the traditions of the dorm we love so much and are eager to welcome you to our floor cultures. so…the renovation was never going to separate us, and COVID certainly won’t either!

you may be wary about your living situation in spring, and though we can’t offer you certainty on our physical dorm, we can assure you with confidence that by joining the burton conner community, you’ll meet dozens of dope as hell people who’ll stick by you for your entire time at MIT.

and living groups are about the people—not the infrastructure, right?

I’m also kind of hype about the Admissions Blogs section of the site—jeez, I hadn’t realized how much I blog about BC.

Helping with the website made me really freaking happy. I love that I’m so attached to my dorm community despite having lived there for only a few months!

Later, I represented Burton Conner in the Class of 2024 Discord. Most of the questions I got about BC—unsurprisingly—were about the renovation, but it was still nice to talk to some froshlings. I also repped my dorm in the DormCon channel in the Orientation Slack, but sadly, there were too many representatives and too few active 2024s to really make a difference.

On Sunday, my community, which is known as the Burton 3rd Bombers, held our first ESC event: Strange Meets. It usually is an event where we chill with freshmen at the Burton Conner grills and serve bizarre forms of meat, but we translated it into a “come meet the Bombers” kind of thing. It was cute, and we met a lot of dope frosh!

I spent Monday continuing the tradition of making a slew of absurdist posters to advertise for the event Deep Talks with Shallow People. The event has been held every REX in the past decade or two, and it gets progressively weirder each year, as seen here… 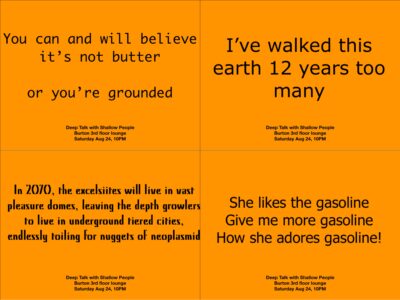 And here are the ones I made: 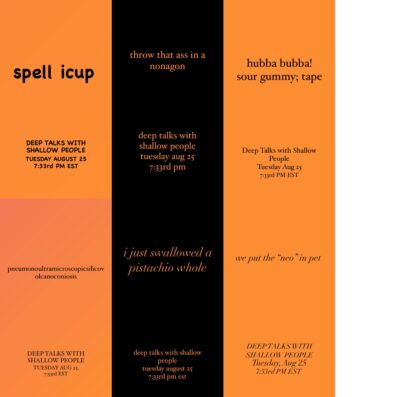 On Thursday, we had the event Where’s My Wallet??, which was created by my boyfriend two years ago. I thought I’d help continue the legacy, so I wrote two of the riddles and helped plan and run the event. It’s structured as a series of riddles/games that take freshmen through various rooms and suites on the floor. We decided to utilize the platform gather.town to do this virtually and repurposed a map already in use by another floor of Burton Conner. It worked pretty well until there were dozens of freshmen in the event who were swarming all the Bombers involved; things got a little chaotic and all order to the riddle-solving was lost. It was still fun, though! 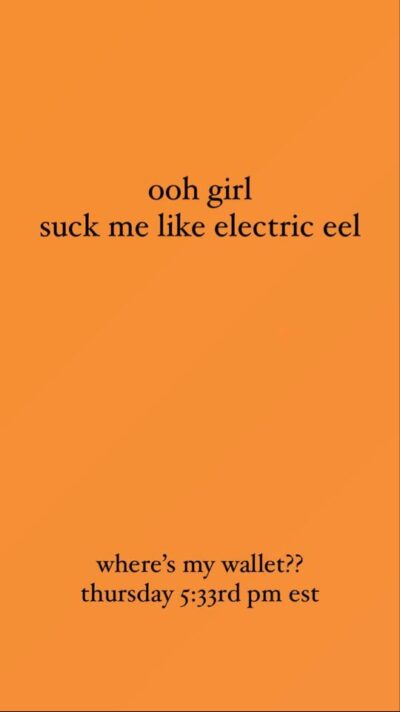 my favorite so far

Our last event—Bomber Guess Who—was on Sunday. We made a Kahoot with two truths and a lie for the freshmen (and some bombers) to play and it was a great time. Our usual event is a bit more interactive; a freshman is asked something relating to a certain Bomber and then has to choose which of 3rd people the statement applies to. There’s a lot of yelling involved that doesn’t translate well over Zoom. Oh, well.

(freshmen who came, I hope you haven’t lost all your respect for me)

On Monday, we launched into subcommunity exploration. My floor hosted a few events, including No More Table and Talent Show. The former, a chaotic, physical Deep Talks/game show-esque event created by two ingenious ’23rds during CP*, was scheduled incorrectly, so our attendance was crippled. The latter, which is a longstanding FLEX tradition,⁠05 my two roommates and i danced to My Neck, My Back last year for our talent show. great bonding moment and super iconic was held on the last day of SCUFFY, so we also had low attendance due to Zoom fatigue.

As for general, BC-wide events, we had two virtual FLEX sessions on Saturday and Monday. The first was a Zoom event with rooms representing each floor, as well as exec and the REX chairs. I wasn’t able to attend since I was busy with moving into my new house, but I heard that it went well. The second was a two-hour gather.town event where first-years could wander the floors and interact with different people. I’m really glad the experience of exploring BC could be replicated in some shape or form!

In the final leg of the SCUFFY process, first-years ranked their floor using a Google Form based on the one we’ve used in past years. And then boom, freshmen were sorted and SCUFFY was over! Wild.

I’m so drained after that process. It took a lot out of me, and I wasn’t even present for every event we hosted. It was worth it, though; a lot of freshmen told us they enjoyed how much effort we put into our events. I truly feel that our events were unique—how could they not be, considering how chaotic they were—so I’m glad we could offer interesting experiences to the freshmen who attended them.

And now we have an incredble class of freshmen! I’m so excited to get closer to them throughout the semester, and to finally meet them in person in spring.