Shenandoah National Park houses 200,000 acres of forests, rocky outcrops, meadows, stunning outlooks, and dramatic waterfalls – so, we weren’t about to settle for an official camping site. We parked outside the first ranger station, and filled out backcountry permits. The park ranger on duty reminded us to string up our food away from our tents, in case it drew interested bears. She also (very matter-of-factly) informed us that this was black bear mating season, and that black bears usually only attack people when it’s to protect their young.

Right on cue, shortly after we hopped in the car and took off along the scenic drive, the vehicle in front of us decelerated. We all craned our necks to see why; a big black bear was standing on the side of the road, and ambled into the forest as we pulled up. Survive bear encounter: check!

A couple minutes later, we reached the first of 75 overlooks; Raphael (the driver) pulled our car off Skyline Drive, and turned the ignition key.

The car didn’t turn off.

The car turned off.

I was a little spooked, but over-protective mating bears and minor car malfunction weren’t going to prevent us from enoying the scenic overlook. With courage in our hearts, we hopped out and took some pictures. 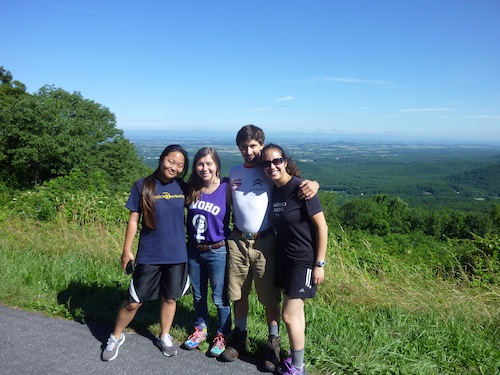 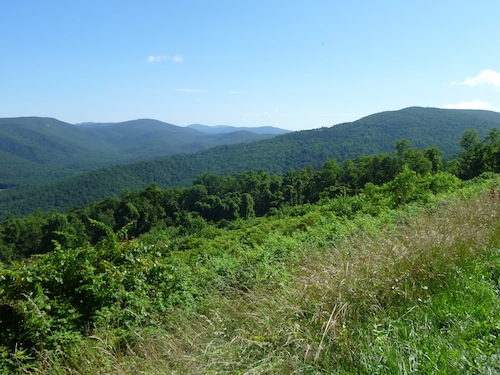 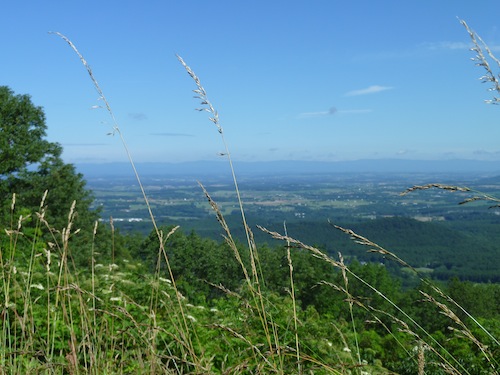 After we got back into the car, Raphael rolled down the windows, opened the sunroof, and put on a truly unique soundtrack. Trees and blue sky rustled by while some Australian men sang (very well!) from the car speakers that we should “Consider Having Sex With a Bearded Man” (a 2011 single), that “If Your Dad Doesn’t Have a Beard, You’ve Got Two Mums” and

“A wizard needs a beard
A pirate needs a beard
A hippy needs a beard
And you, you need a beard”
While The Beards insisted that there is “No greater crime against the human race / Than when a father takes a razor to his own son’s face,” we cruised up to a high flat area called Big Meadows. Apparently, Roy Sullivan spent time as a park ranger there. With him in mind, and a wary eye on some nearby dark storm clouds, Queen Victoria III, Jennifer and I wandered around the meadows while Raphael fiddled more with the car and examined the park map.
Me and Queen Victoria III (not pictured: the eight billion gnats swarming around us) 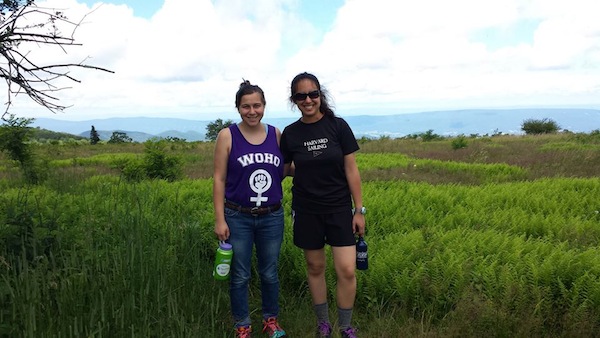 The ravenous bugs eventually persuaded us to retreat to the car. We finished Skyline Drive, and looped around the park on the highway, which (en route back to the park) took us through a pictureque town called Sperryville. 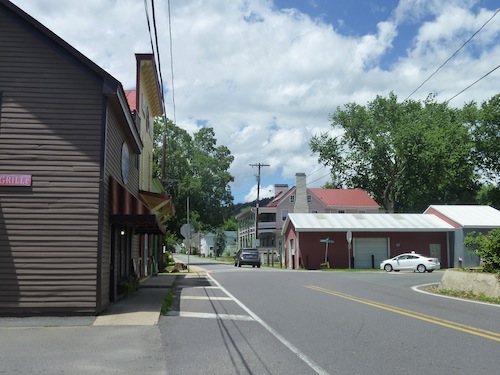 While Raphael, Queen Victoria III and Jennifer hid from the heat inside a pizza store, I took a walk, expecting to find Absolutely Nothing and finding instead a Civil War historical trail, which took me over a lovely little creek. The path was littered with signs about famous generals and armies and a slave named Caroline Terry. In case you’re interested: 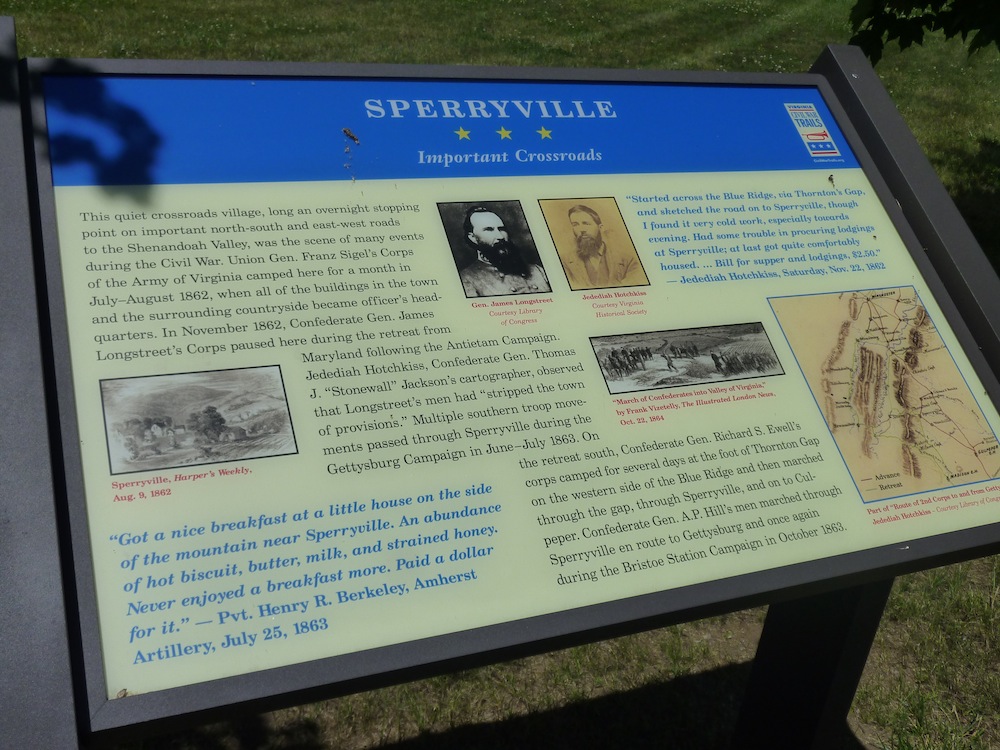 As I approached a quaint red-walled antique store, my watch told me that Raphael’s pizza was done. I jogged back to meet the others and, feeling very fond of Sperryville, watched the corner store and Rudy’s Pizza (“best pizza in Sperryville!”) and the Thornton River Grille and Caroline Terry’s old haunts disappear out the rear window.
Eventually, the road led us back to the edge of the park. Raphael performed some impressive parallel parking feats, and after hauling on backpacks filled with tents and sleeping bags and water bottles and trail mix, we hiked to the White Oak Canyon waterfalls.
We set up camp at the lower falls: 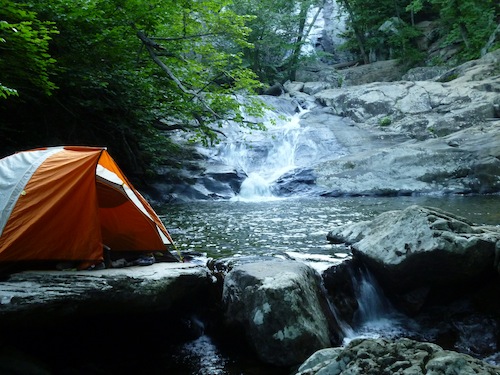 Jennifer stayed behind to watch our bags, while Raphael, Queen Victoria III and I started off on the steep, 3/4-ish mile climb to the upper falls. Aware that sunset was looming and feeling particularly energetic, I took a few pictures then scampered up ahead of my friends.

One of those pictures: 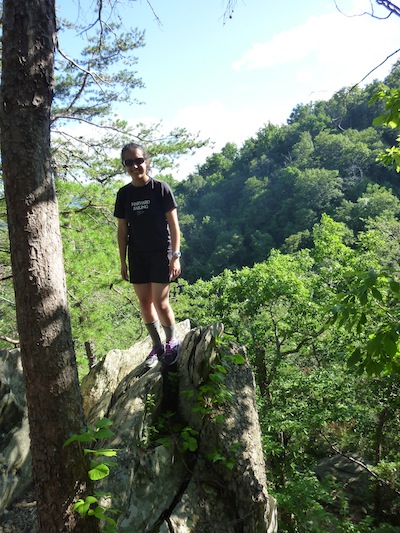 The ground was gravelly. I hopped on rocks even when there was flat ground to walk on. I had been accumulating sweat all day from the Virginia humidity, and the faster I moved the more refreshing the breeze; enjoying this alone time, I hurtled around a corner and there, a couple of meters ahead, a snake at least the thickness of my forearm lay stretched over the path. I stopped.

I thought: “That snake is at least six feet long.”

I thought: “I wonder what kind of snake that is.”

I thought: “I wonder whether it’s poisonous.”

I thought: “I wonder whether I should move.”

I thought: “I don’t think I’ve seen a snake that big, except maybe in the zoo. Or in the first Harry Potter movie.”

I remembered a field trip to the Singapore zoo way back in the day, when a little green tree snake slithered over my foot. I also remembered that if a snake chases you, you’re supposed to run in a zigzag pattern.

While I stood there staring at the snake and trying to come to terms with my dreadful survival instincts, Raphael caught up. As someone whose survival instincts are more obviously a product of natural selection, he spent 0.00 minutes reminiscing about anything; he saw me, saw the snake, grabbed my arm, said “come on. quickly. walk.”, and yanked me back around the corner and down until we bumped into Queen Victoria III.

“Your Majesty,” Raphael said. “There’s a six-foot snake over there. We should go back down.”

Her Majesty insisted on seeing the snake, though, so while Raphael hung back with a very concerned look on his face, she and I peeked back around the corner to catch a glimpse. It had moved; we finally spotted it lying a few feet off the path. All of us were content to take this as A Sign that it was time to keep Jennifer company, so we turned around and skidaddled back to camp.

As the sun set, we cooked dinner using Raphael’s stove and fuel (this is the kid who drove 2548 miles from Montana with a full set of outdoor survival equipment. He came prepared.) I took a hike to find a secluded place to pee, stung my leg on some nettle, and watched as the sun disappeared and the fireflies grew bright. I was shocked at how many there were; the air lit up with yellows and oranges that completely eclipsed the stars.

The next morning, I woke up to the sound of Queen Victoria III’s “HELLO?” outside my tent. Shocked at how late I’d slept in (it was 9) I threw on the same clothes I wore the previous day (yay camping!) and stumbled outside. After cooking and eating breakfast, we played in the waterfall. I scooted on my butt over the rocks, tempting fate, letting the water gush past my legs until WHOOSH-the coefficient of friction was too low to support my butt, and with a shriek I went careening down into the lake. And so began the use of the waterfall as an exhilarating (if slightly terrifying) slide. Jennifer got a picture: 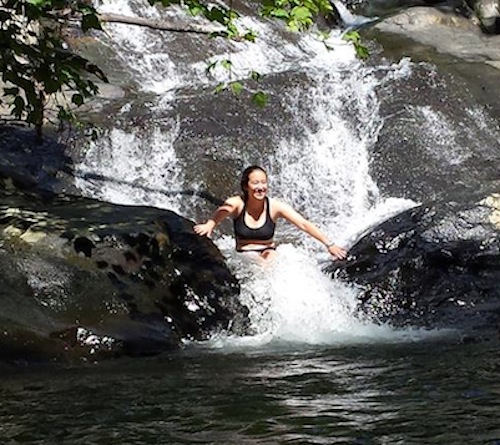 Time ticked on, the sun continued to rise, and eventually we hauled on our packs and hiked back to the parking lot. On the way back to Charlottesville, Jennifer peed for the first time in something like 24 hours (seriously.) and we nearly locked Raphael in a grocery store toilet by accident.

That evening, I saw “127 Hours” for the first time, and was very glad that I saw it after and not before our hiking trip.

Now, I’m back in the office. I got up at 6:45am, and Diana picked me up at 7 – we drove to a cafe and studied for the GRE for two hours before heading to the NRAO. It’s been an infuriating day; stuff is just NOT working, so I typed this up in a fit of desperation to do ANYTHING other than look at another frequency/amplitude/pulse phase plot. Apparently I’m not the only one who’s having attention issues, because a coworker from across the hall just rolled into our office in her wheelie chair.