This is what Websis has to say:

I’m on the train with my family, and Boston is now out of sight. I haven’t managed to process what happened on Friday, so for now I’ll just show you some pictures and tell you roughly what happened.

We were assigned station numbers based on major (Course 8 was Station 19) and asked to report to Johnson Track by 8:15am. I was at Johnson at 8, only to find a line stretching across the front of the student center and almost all the way to Mass Ave: 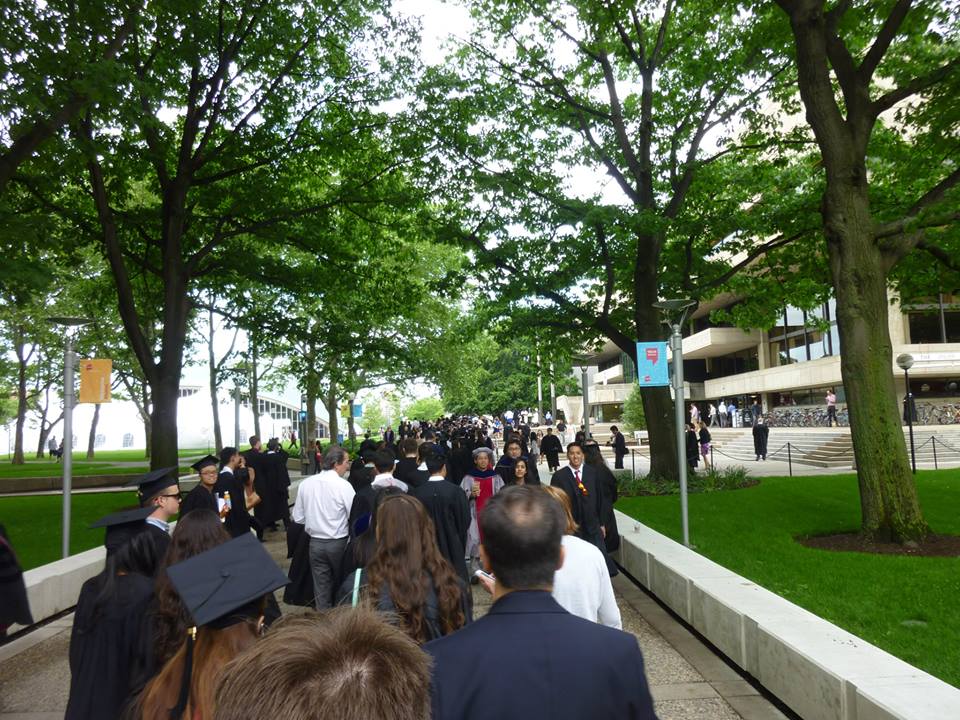 I was not pleased. But the weather was beautiful and I had waited four years to graduate from MIT, so I figured I could wait another 20 minutes or so.

Inside Johnson, I was struck by how many people in the Class of 2014 didn’t look familiar at all, as well as how much affection I felt for them all anyway. I pushed my way to the muffin baskets, which were against the wall and continually refilled by magic. I had been feeling nauseous all morning but forced two blueberry muffins down anyway.

At some point (I don’t really know how this happened – I don’t recall doing anything in particular) it was 8:45am and I decided to make one last break for the bathroom. I was in the last group allowed to use the facilities and when I hurried back into the main room I realized that I had completely forgotten the physics line number (18? 25? 49? 61?) In a total panic, I ran around the perimeter with visions of everybody leaving without me. Finally my brain resumed normal operations: it occurred to me to check a sign for my line number (19) and all was well.

We wore stickers on our regalia (I was #21) and stood in line accordingly. I was next to someone with the last name Huffman, and we quickly figured out that we’ll both be in Pasadena post-grad (he’ll be at NASA JPL). Hooray! A new friend :)

Course 8 was next in line to Course 9, so I managed to get a picture with Emad: 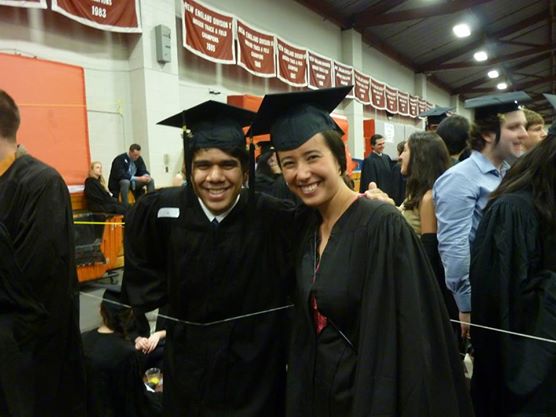 After an eternity (around an hour) we were cleared to leave Johnson. We cheered and filed out into the sunshine — only to be led to the outdoor track, which was in the opposite direction of Killian Court and graduation. One final fitness test before we could be cleared to graduate? Surrpise mile run? Were they walking us to the shore of the Charles by New House for a final swim test? Most people took the swim test during freshman orientation, so maybe they wanted to make sure we could still swim.

…such were the text messages exchanged between myself and my friends while bored out of our minds in line. 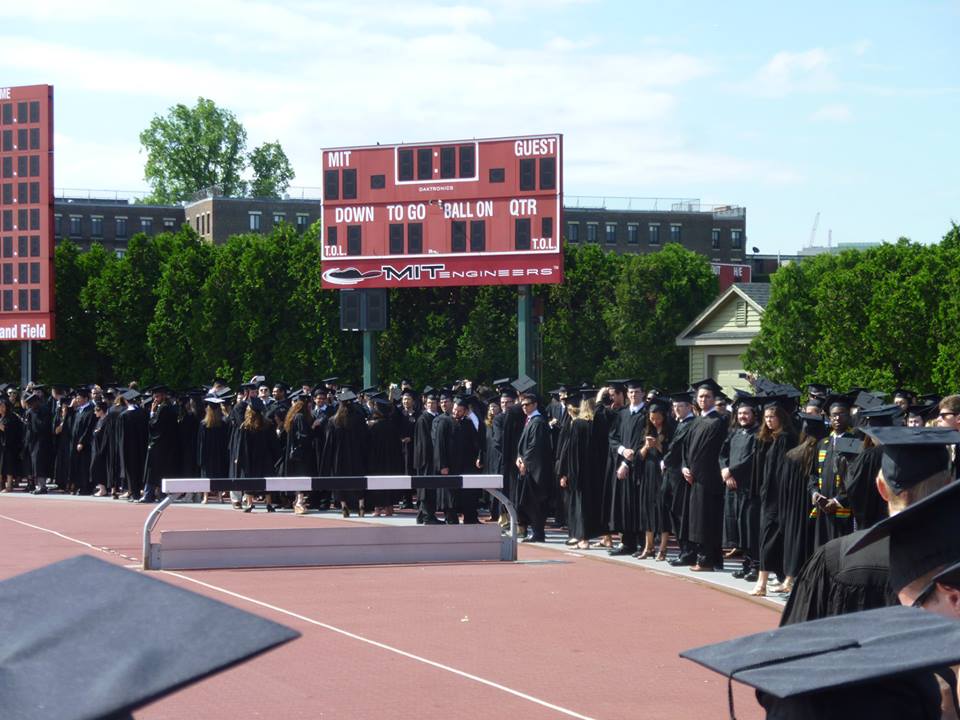 And then the line got moving again. We walked down dorm row as a class, across Mass Ave (I felt sorry for anyone trying to drive around MIT campus that morning), along Memorial Drive, and finally into Killian Court. The dome has never looked so grand to me. 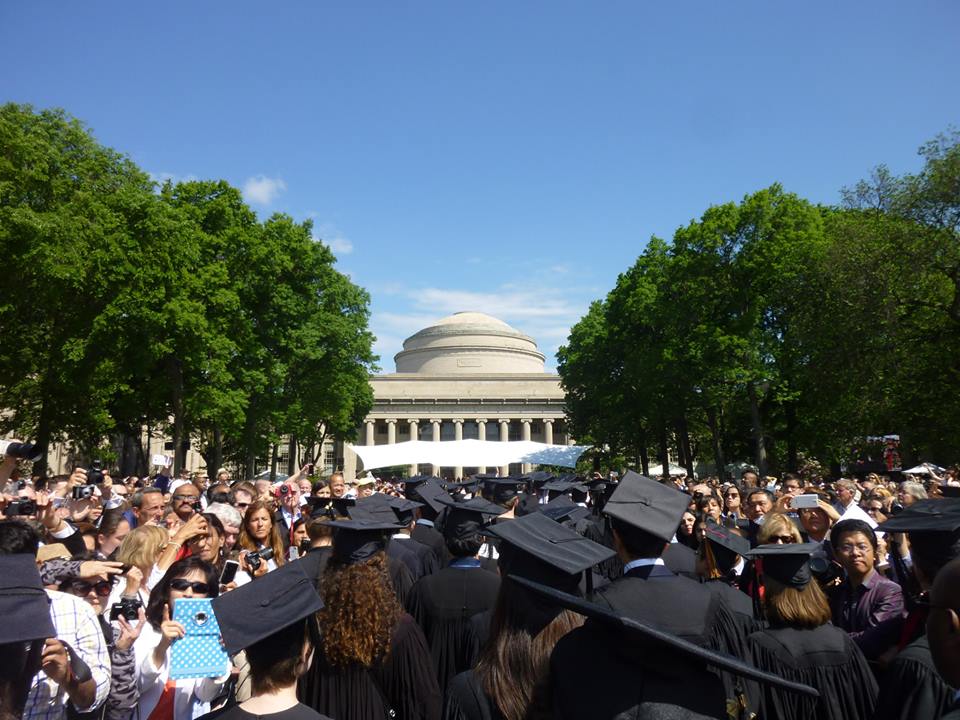 We filed into our seats. The commencement booklet had a leaflet that could be folded into a paper airplane (there were numbered dotted lines!) so we got busy.

The ceremony started at around 10:20. There were a bunch of speeches (Rafael Reif was SO GREAT!) and Anika ’14 (our class president) led us in flipping over our brass rat. Brass rats have the Boston skyline on one side and the MIT skyline on the other: undergrads wear it so that they’re looking out at the Boston skyline, and alumni wear it so that they’re looking back at the MIT skyline. As of that moment, I wear mine as an alumna. 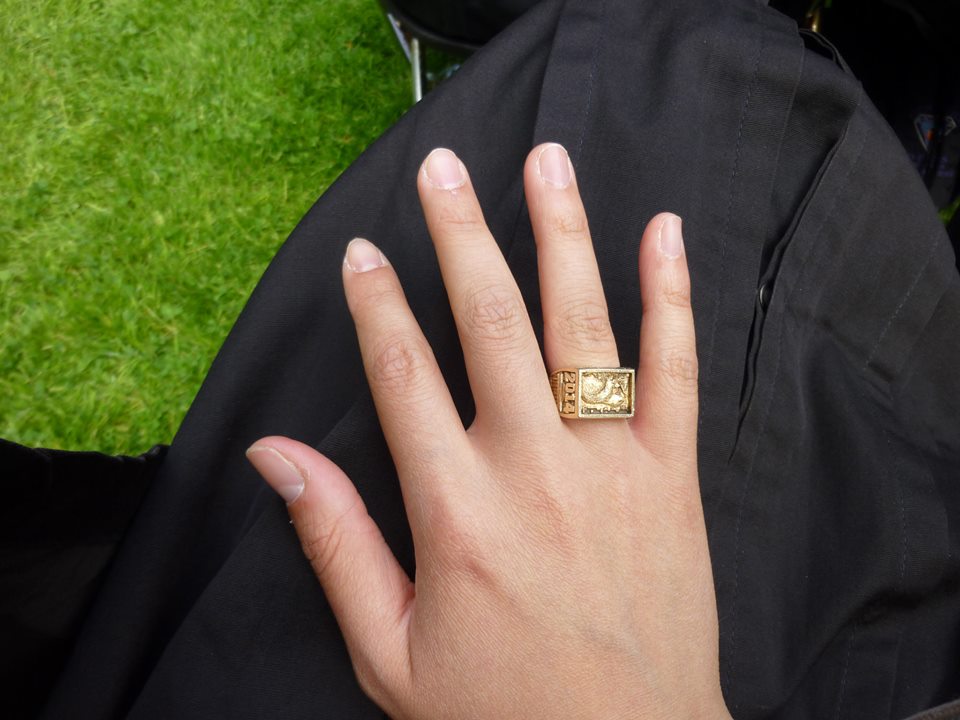 Then we started receiving our diplomas: School of Engineering first, School of Science nearly last. Each individual’s name was read out loud, so I had a long time to wait. I cheered and screamed for friends, took a few bathroom breaks, visited my family in the audience. I counted how many names in the booklet I recognized: about 17% of the class.

I was startled when my row was asked to stand up and get in line. “This is it!” someone in front of me said. The names in front of me were a blur, and then my name was called, and I walked passed professors in elaborate robes, waved at Prof. Bertschinger, accepted my diploma, shook President Reif’s hand, walked off the stage – 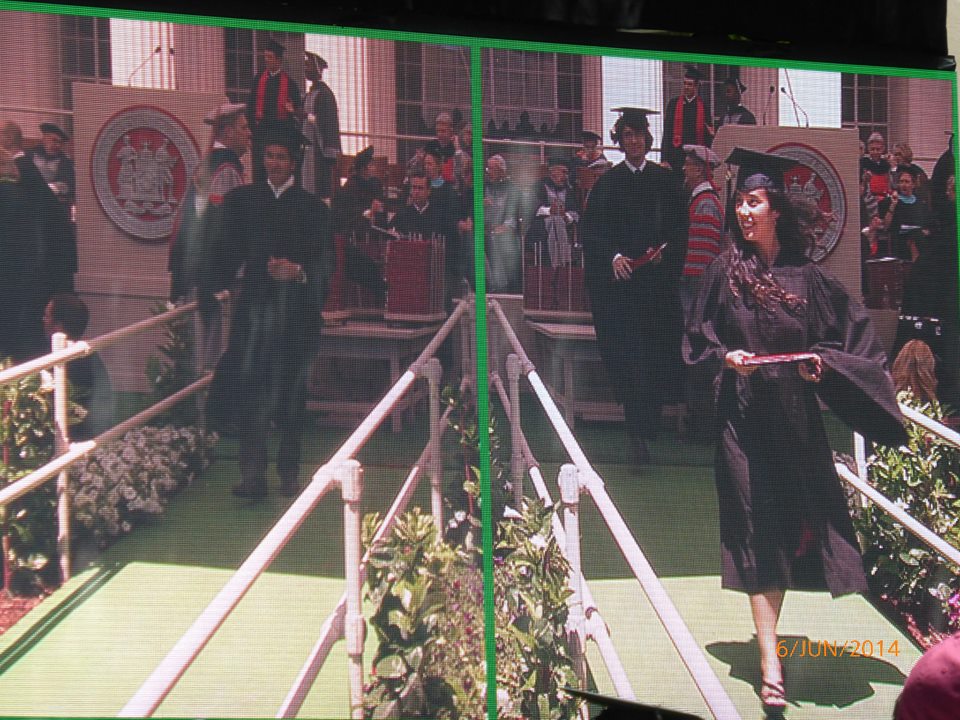 – and sat down again. 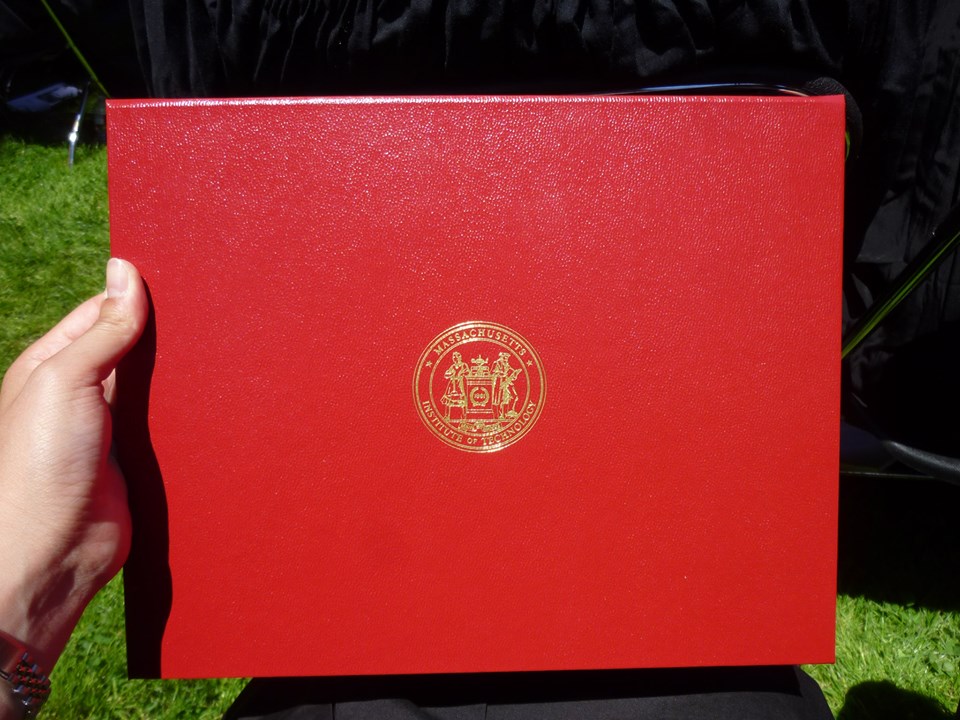 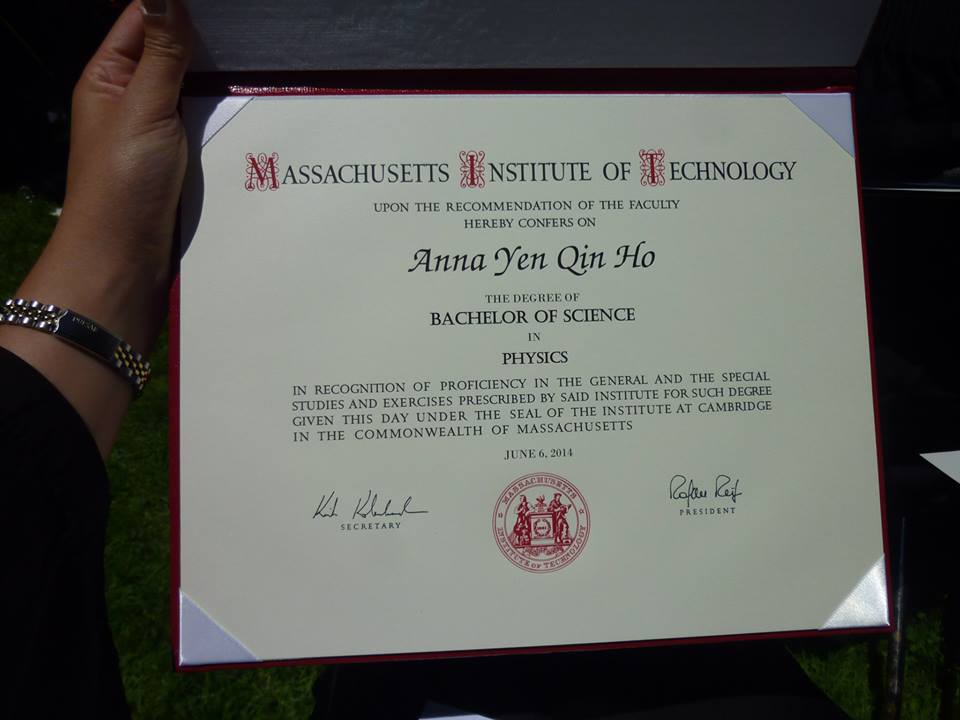 Chris shouted my name and I looked over – it was an enormous relief to see his familiar friendly face. He took a picture: 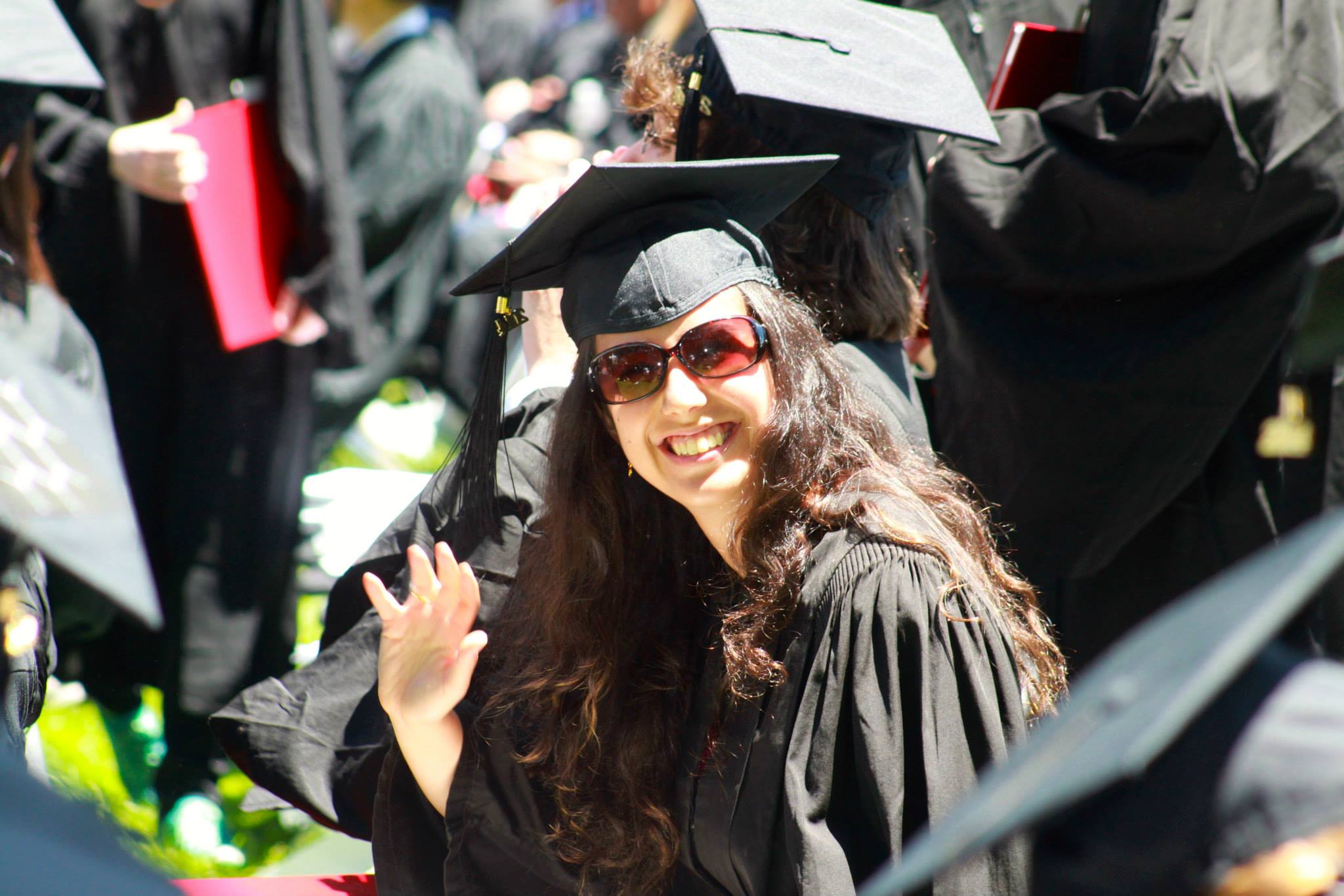 After that, the afternoon became a blur of camera clicks and cheek exercises.

With the French House seniors (left to right: Emma in Course 2, Sophie in Course 8, Sumin in Course 5, Elizabeth in Course 16, myself): 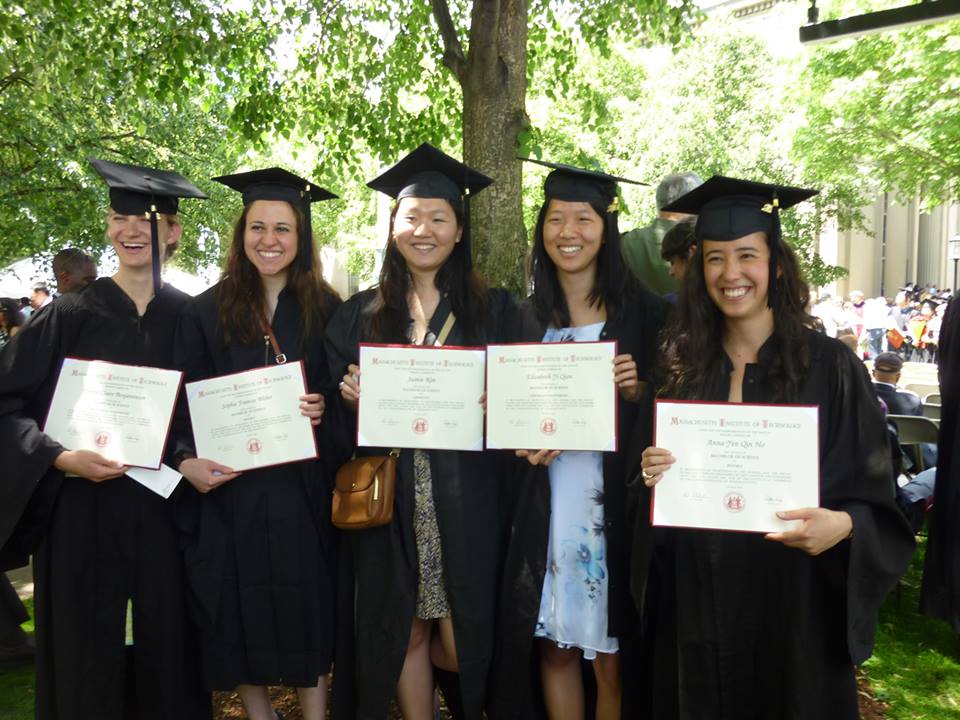 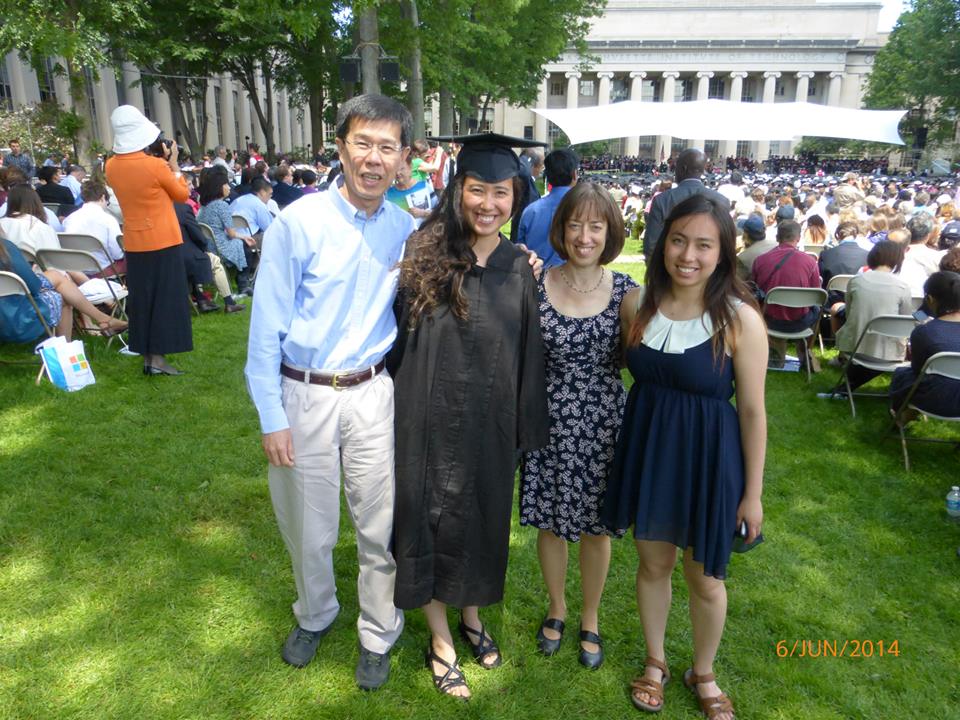 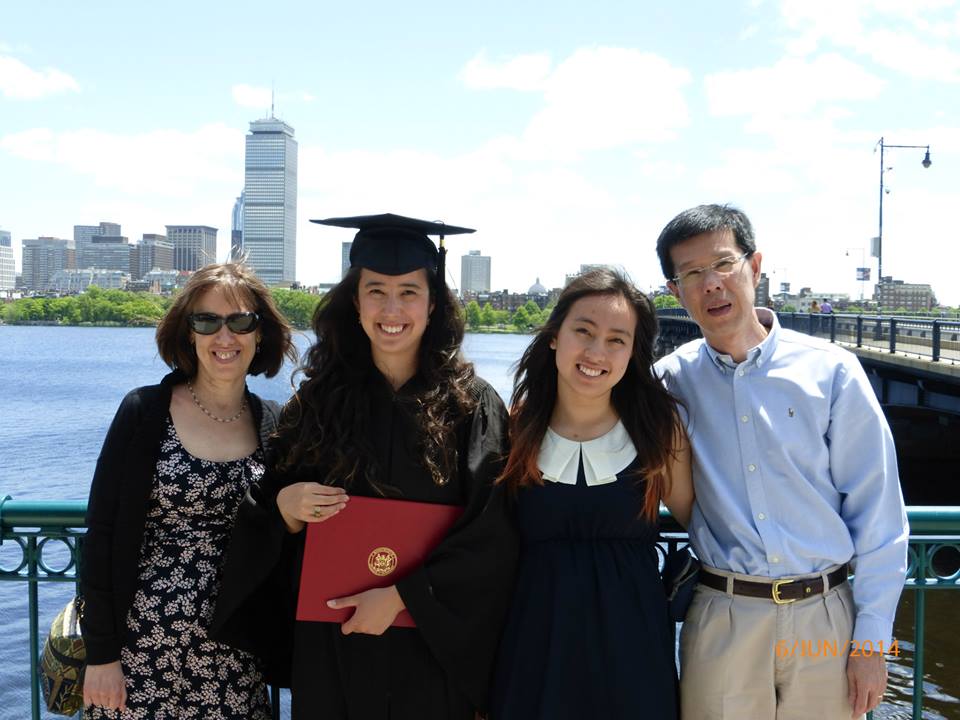 After lunch, we went to the Physics Department reception in the Pappalardo room. The room has pictures on the walls of MIT faculty-Nobel laureates shaking hands with the King of Sweden. One of those faculty is Wolfgang Ketterle, so it was a little surreal to see him wandering around the room. He doesn’t know me at all, but I figured “why the heck not” and asked him for a picture. I got my very dear friend Sophie (who also lived in French House!) to join us. 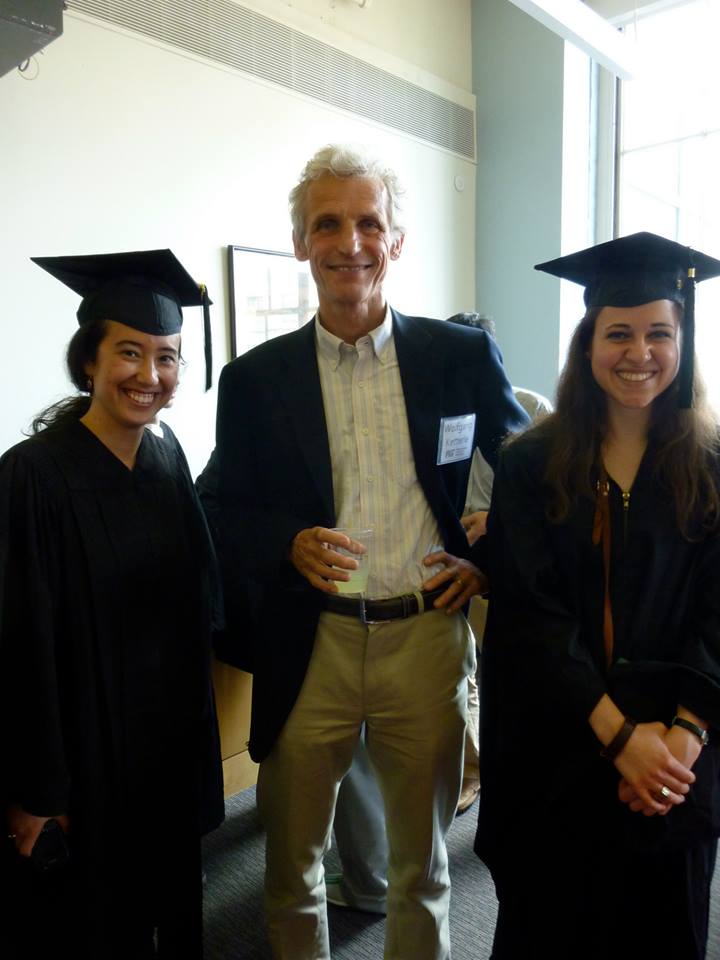 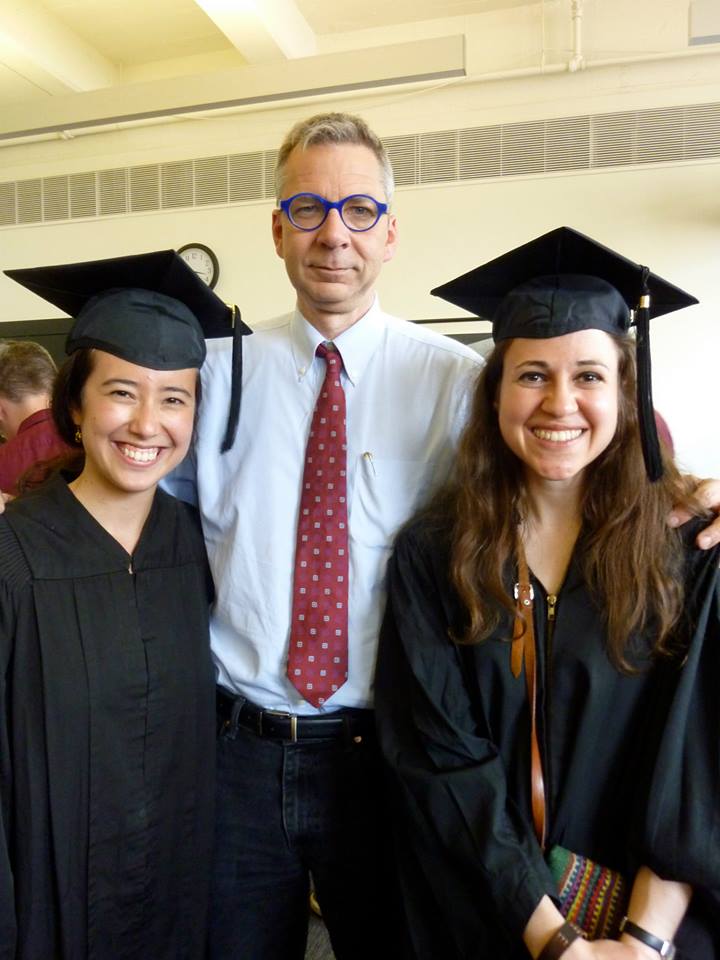 and, of course, I got a picture with Prof. Alan Guth, my academic advisor. 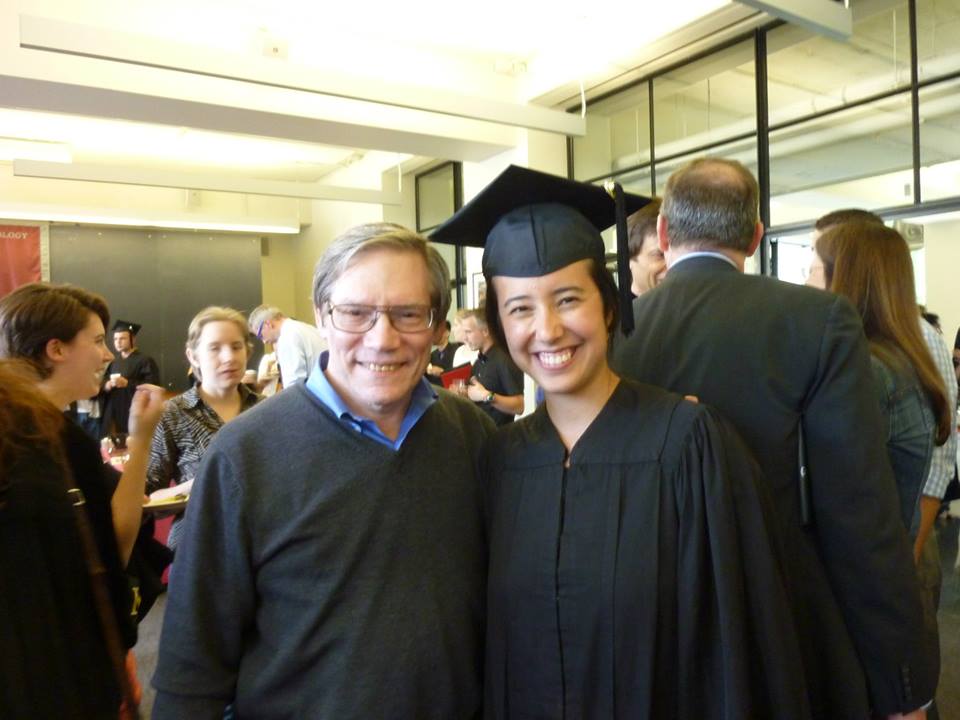 In Prof. Guth’s Early Universe class (8.286, which I took sophomore fall) I met Eric, who became one of my best friends and J-Lab partner: 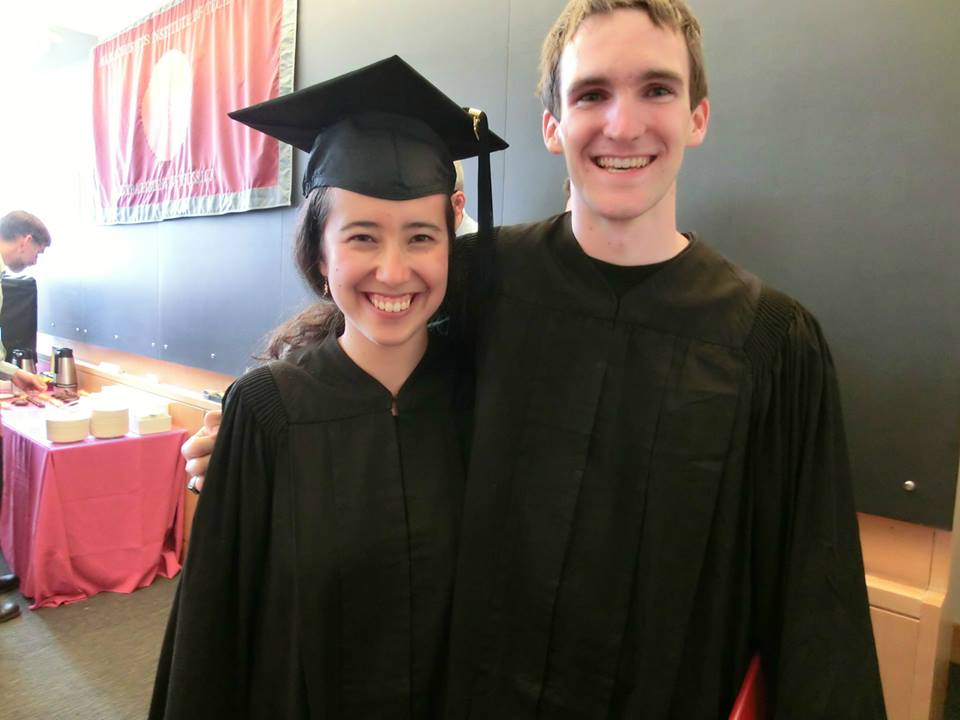 And there’s Sam, who I met during CPW as a prefrosh, before I had even decided to come to MIT. We met a party on the rooftop of Baker and for the rest of the night he supplied me with cough drops, a pool lesson, and conversation. He’s been one of my best friends ever since. We took a picture in the Faraday cage: 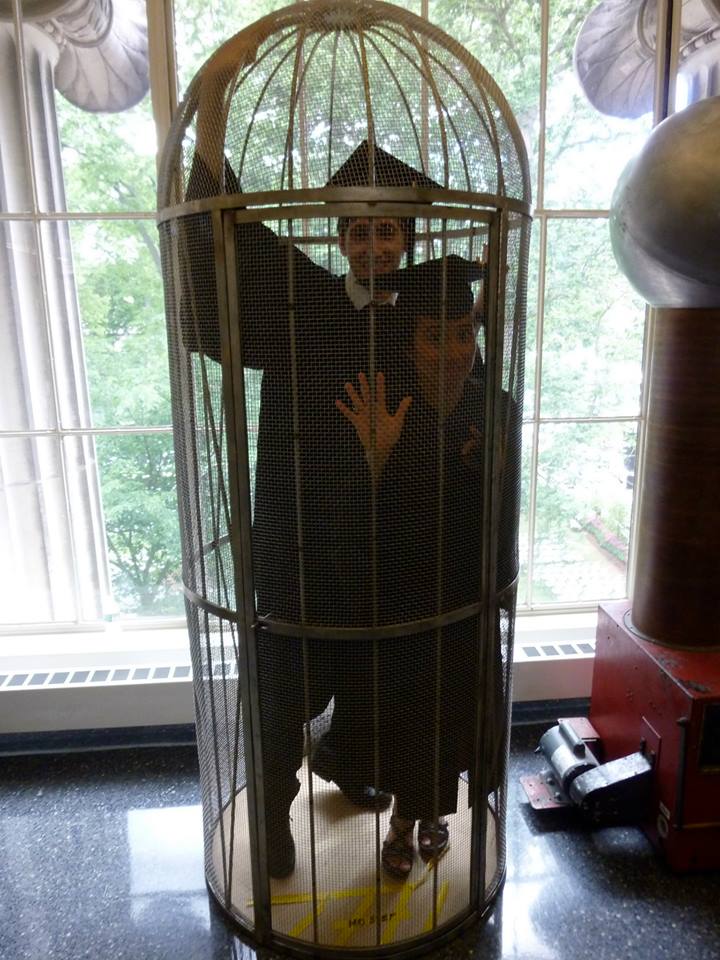 It’s hard to celebrate being done with MIT when it means saying goodbye to the friends who got you through it.