In my last entry, I mentioned that I had a bunch of things I wanted to do before I graduate and one was to get through this list. Last weekend, I made a little more headway on this goal by tackling Item #51: Eat at Mike’s Pastry.

Mike’s Pastry is one of many bakeries and cafes in Boston’s North End and is well-known for its delicious cannolis. Over the course of my time at MIT, I’ve had many treats from Mike’s Pastry – but, as I realized last week, I’ve never actually been there.

This is what motivated me to venture out to North End two Fridays ago and – for the first time, visit Mike’s Pastry. (I *actually* wanted to go to the North End mainly to eat at Giacomo’s Ristorante, which has ridiculously awesome Yelp reviews – Mike’s Pastry was kind of a ‘kill two birds with one stone’ dealio).

As expected, the cannoli (chocolate chip flavor!) was amazing :) Anddd, I’m probably going to go back this weekend (and maybe actually get into Giacomo’s this time).

One of my favorite aspects of the North End is its proximity to other fun/eventful locations – like Faneuil Hall and Quincy Market. The area is filled with little stores, street artists, places to eat, historical tidbits, and more. Faneuil Hall has special significance to me, because that’s actually where I became a U.S. citizen :)

(1) I had my first test of the semester this morning in 7.06 (Cell Biology). Meh. Not really that sure how it went.

(2) On a happier note, I had brunch recently with some of my favorite Camp Kesem peeps: 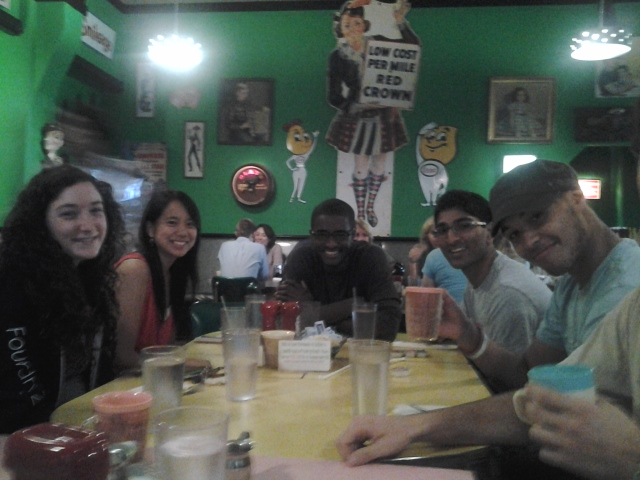 That’s about it for now – more updates after this weekend!