Another CPW has come and gone, and with it the throes of prefrosh staring wide-eyed with smiles plastered on their face being carted from free food and festivity time and time again. It’s always an energizing event for me, seeing all you guys excited to be here and the prospect of studying here reminds me that I’m pretty fortunate to have had the opportunity myself. That’s an easy thing to forget when you’ve got your head down in your work day in and day out.

Of course, CPW brings out the best in a lot of people: facilities pays extra attention to make sure things are just so, professors and students organize tons of events to show off all the nifty things they can do, and hackers – MITs clandestine purveyors of engineering spectacle–are no exception.

This year, there were a number of particularly impressive hacks throughout the weekend. For starters, Lobby 7, the entrance to MIT from the road, was transformed into a circus ring! 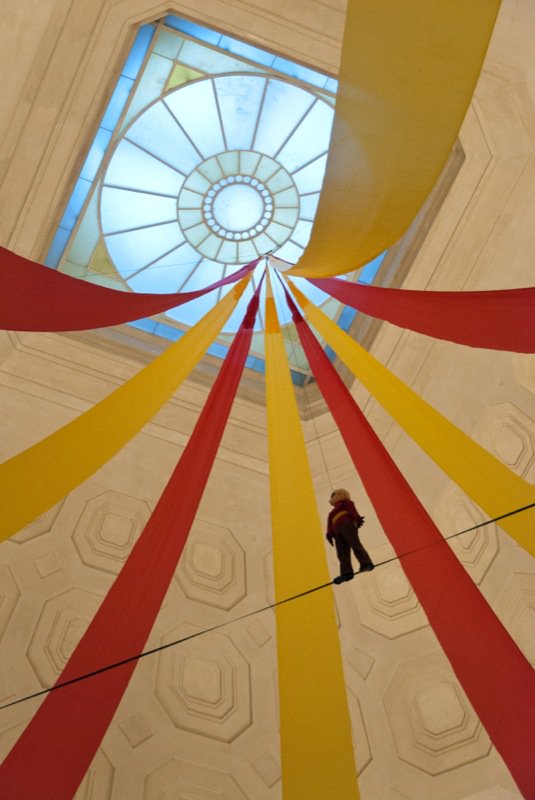 Here, you can see a tightrope walker balancing the challenges or work and play! 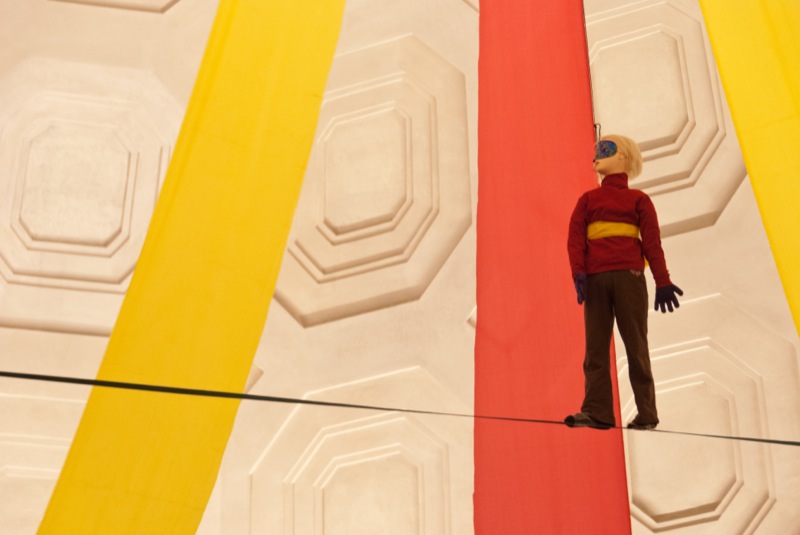 Not the determination in his eyes, the bravery and surety in his movements! His questionable fashion sense! No doubt, an excellent fit for MIT. 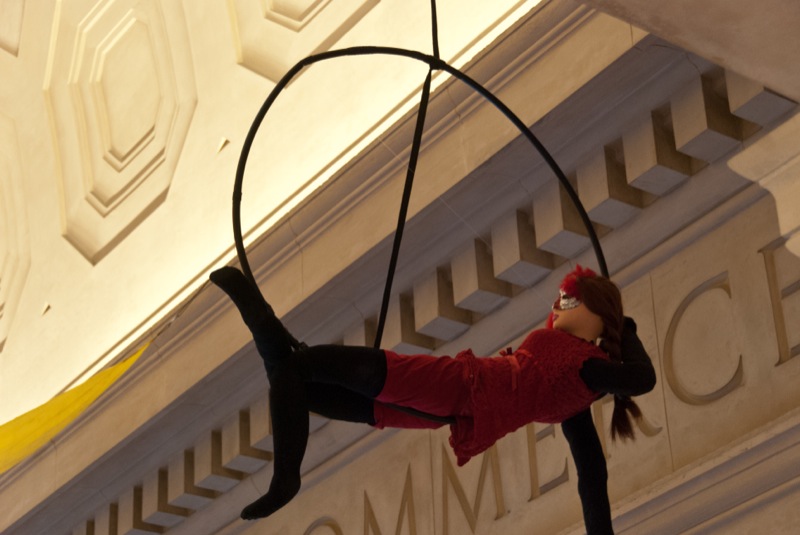 There was also a hoop artist 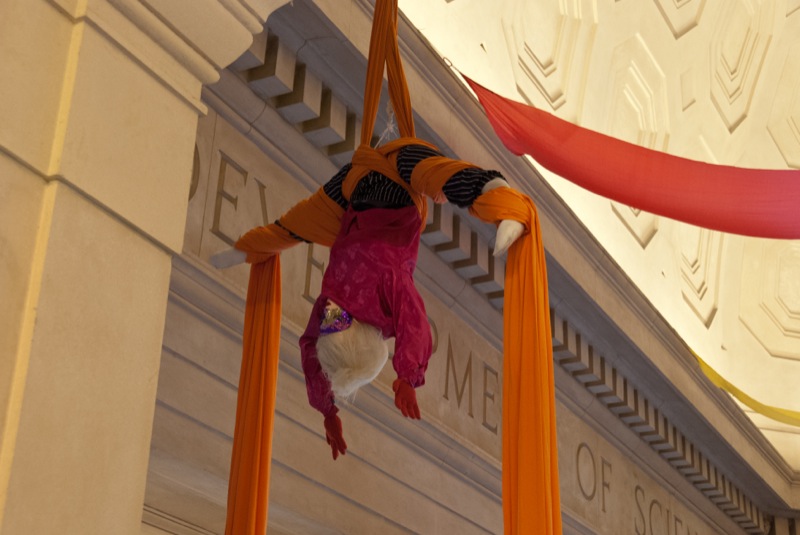 And a silk dancer 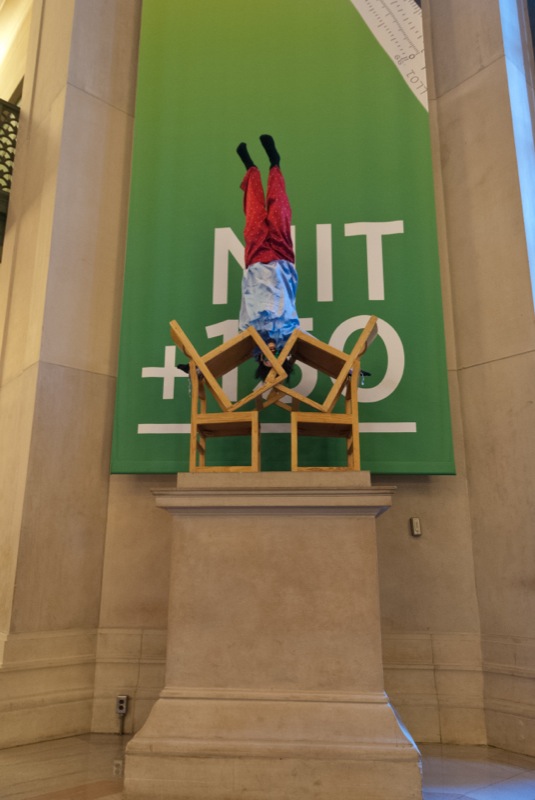 plus the normally empty plinths were adorned with a topsy-turvy 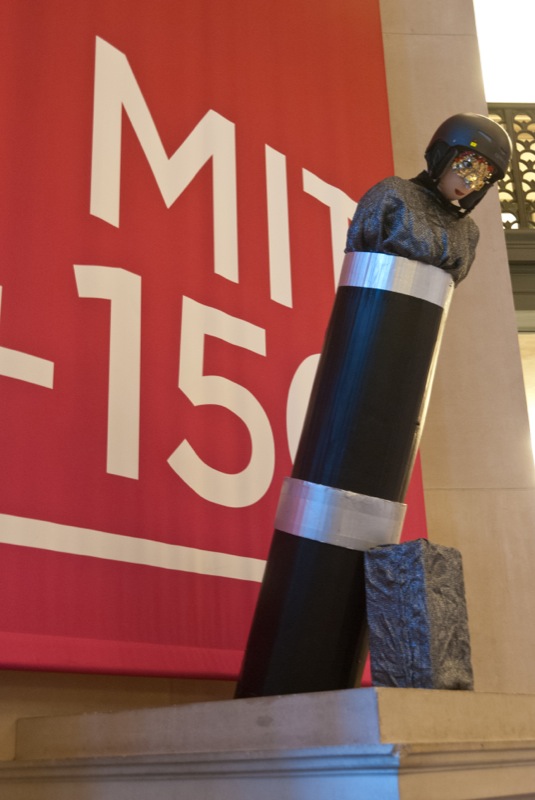 As well as a brave soul ready to be shot out of a cannon! Something I think many upperclassmen can relate to…. 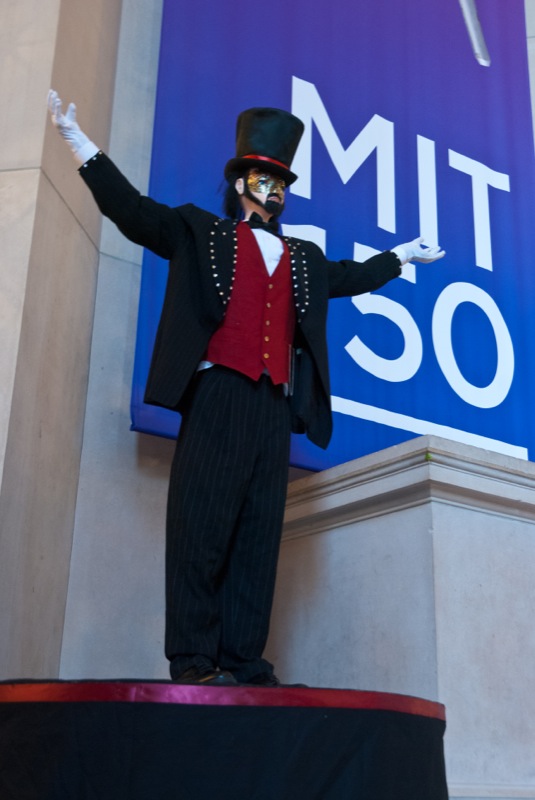 And of course, what would a circus be without a ringleader?
But the pinnacle of the display was the marvel that was the trapeze artist: 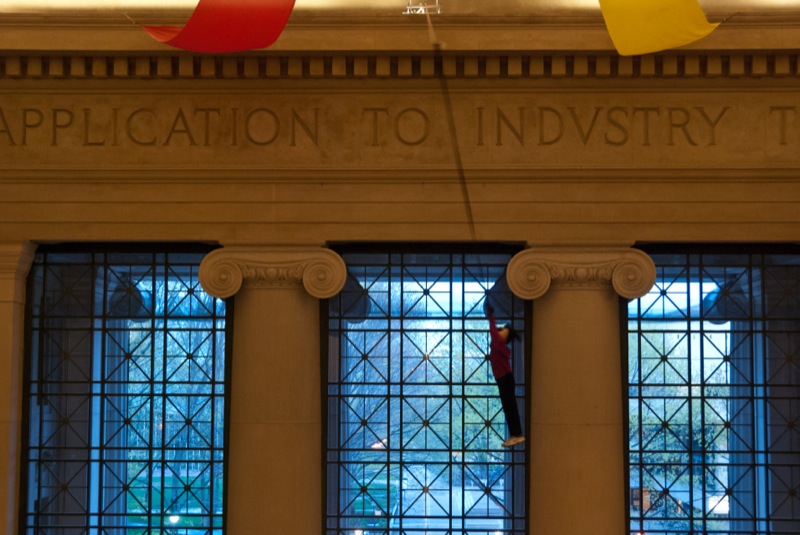 It’s hard to tell in this photo, but he actually swung back and forth continously!
Meanwhile on the other side of campus, we had a visitor of an altogether different sort, lets see if you can spot it: 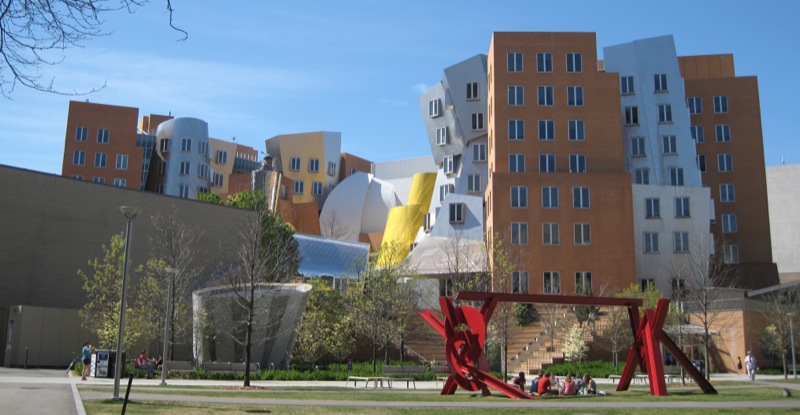 They looked right at home amidst Stata’s alien exterior. Ok that’s a tough one. Let’s see if we can zoom in a bit: 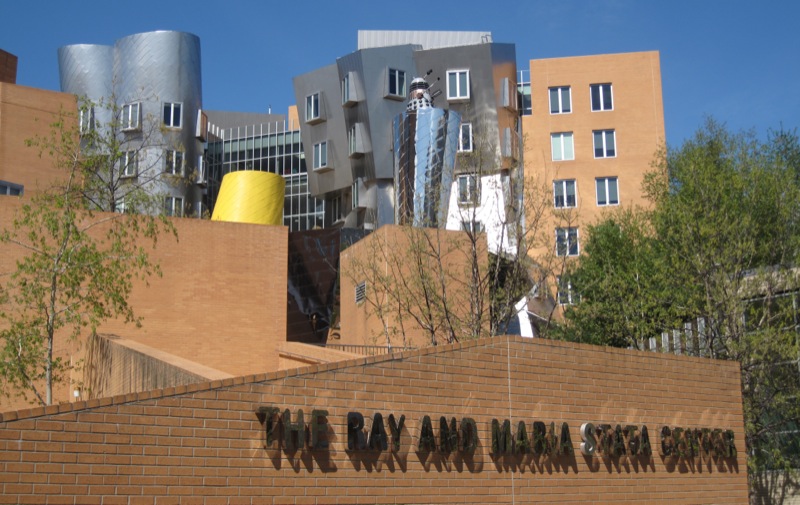 How about now? See it? Alright, you’ll definitely see it here: 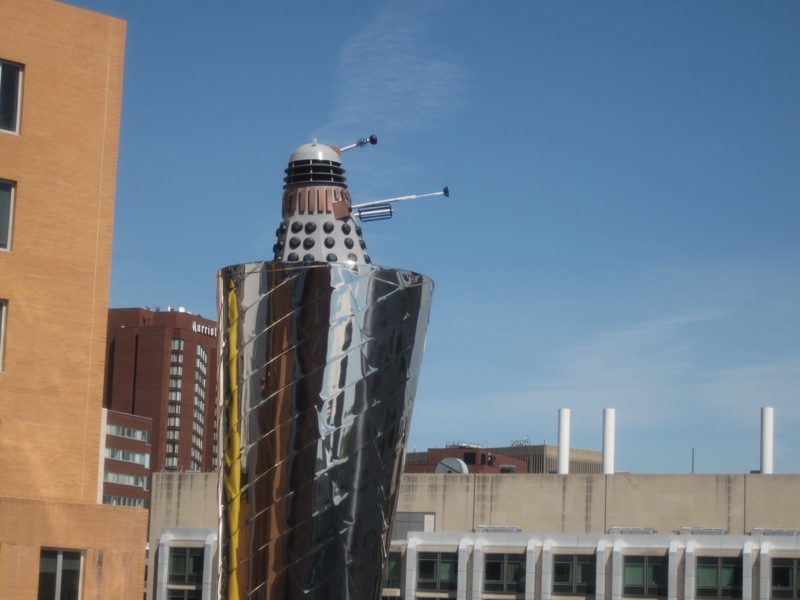 AHHH!!!! IT’S A DALEK!!!! RUN!!! Actually, if given the choice between facing the Dalek or back-to-back exams during hell week, I might take my chances. They can have a similar temperament.
But the true cremé de la cremé of hacks during CPW, if not my time here, was the one pulled on building 54: 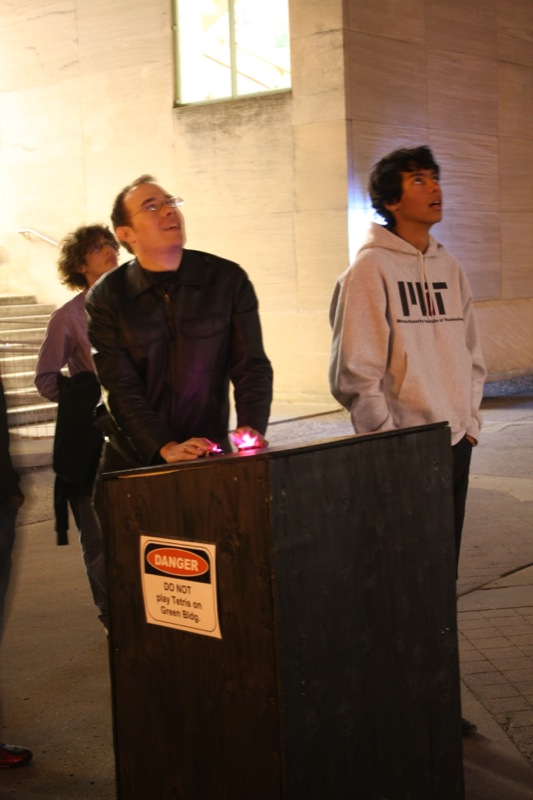 What on earth could this mysterious black console be controlling? What’s causing the slack jawed, uncontrollable excitement from the gentleman in the white hoodie? 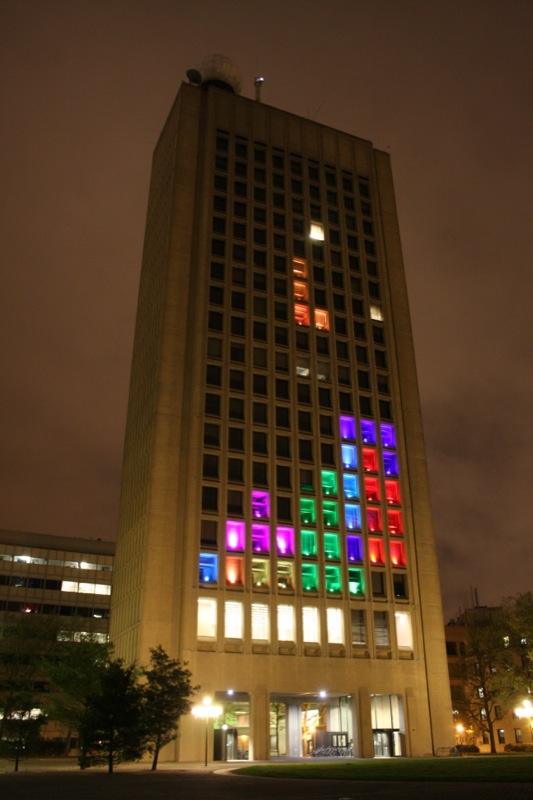 Tetris. on the freaking green building.
Apparently, this feat was pulled off by installing multicolored modules in nearly every window sill. There are 17 rows with 9 windows each, meaning 153 modules were crafted and installed secretly to turn the green building into one of the worlds largest full color displays. It was an absolutely incredible sight to see, especially because it was visible from across the river in Boston, meaning just about anyone who could spare a glance toward MIT was rewardedd with this visual spectacle. A momentous achievement in hacking history, and destined to be one of the classics people talk about for a long time. Of course the hack ran the nerd gamut across the interwebs, garnering blog and press coverage all over the place.

All in all CPW was an incredible weekend, blessed with nice weather from the weather machine, and invigorated with the excitement of a new batch of nerds ready to live in paradise for a while. As important CPW is for prefrosh trying to figure out where to enroll for college, it’s pretty important for enrolled students as well. It’s a great blow-off valve for the buildup of stress and caffeine-resistance that tends to accumulate over the course of a semester and over the years. I love MIT most of the time (most….), but seeing campus lit up with hacks a plenty and cool events to go to is definitely a hilight.
(all photos courtesy of mithacks.mit.edu)