Starting last week, IAP (Independent Activities Period) commenced, which is a month of courses, events, and other activities around campus between the fall and spring semester. While some people go off campus to complete internships or study abroad in some cases, I spent my first IAP here on campus taking two classes for credit. Since just about every weekday follows the same schedule, here is a look back on last Friday.

8:37 – My alarm goes off. Why is the time so oddly specific? Well, truth be told, I overshot the :35 that I was going for, and I was too impatient to go back and fix it. That being said, Monday through Friday now start off at this time. During IAP, I didn’t go ahead and purchase the meal plan, so I am cooking for myself this month. I bought a lot of soup. A tad too much most likely. My pantry of food resembles that of the Soup Nazi. Anyways, I grab my cereal and stuff and head down to the Country Kitchen at Next to eat my breakfast in my pajamas.

9-ish – I start to head back upstairs to get ready for the day. My time over on campus goes from about 10-4:30 each day, which makes my backpack into half books and half snacks. Armed with trail mix, granola bars, and some notebooks on physics, I head out after bundling up to make the hike from Next House to my classes.

9:30 – normally, I end up getting to campus a half-hour or fifteen minutes early. My first classroom is in a decently sized lecture hall, so I spend that time beforehand in a small classroom that overlooks Killian Court and work on my weekly PSet for my two courses. I try to get at least a problem done while I’m there in the morning and wake up my brain for my class starting.

10 – Classical Mechanics II (8.223) Classical Mechanics II is a required course for a Full Physics major here. It is a six-unit course, and I had the pre-reqs for it from last semester, so I signed up! It is definitely a step up from AP Physics C! It honestly is really interesting this whole new alternative approach that we are learning to tackling seemingly impossible questions using traditional Newtonian equations to solve. We use this thing called the Lagrangian and The Principle of Least Action that even followed me into my other class later this day! Compared to my previous credit coming in for 8.01 and 8.02, this class definitely feels more intense. I don’t think I have ever used the product rule more in my life than on all the worked examples I have completed for the class. Here is some of my notes from class on Friday: 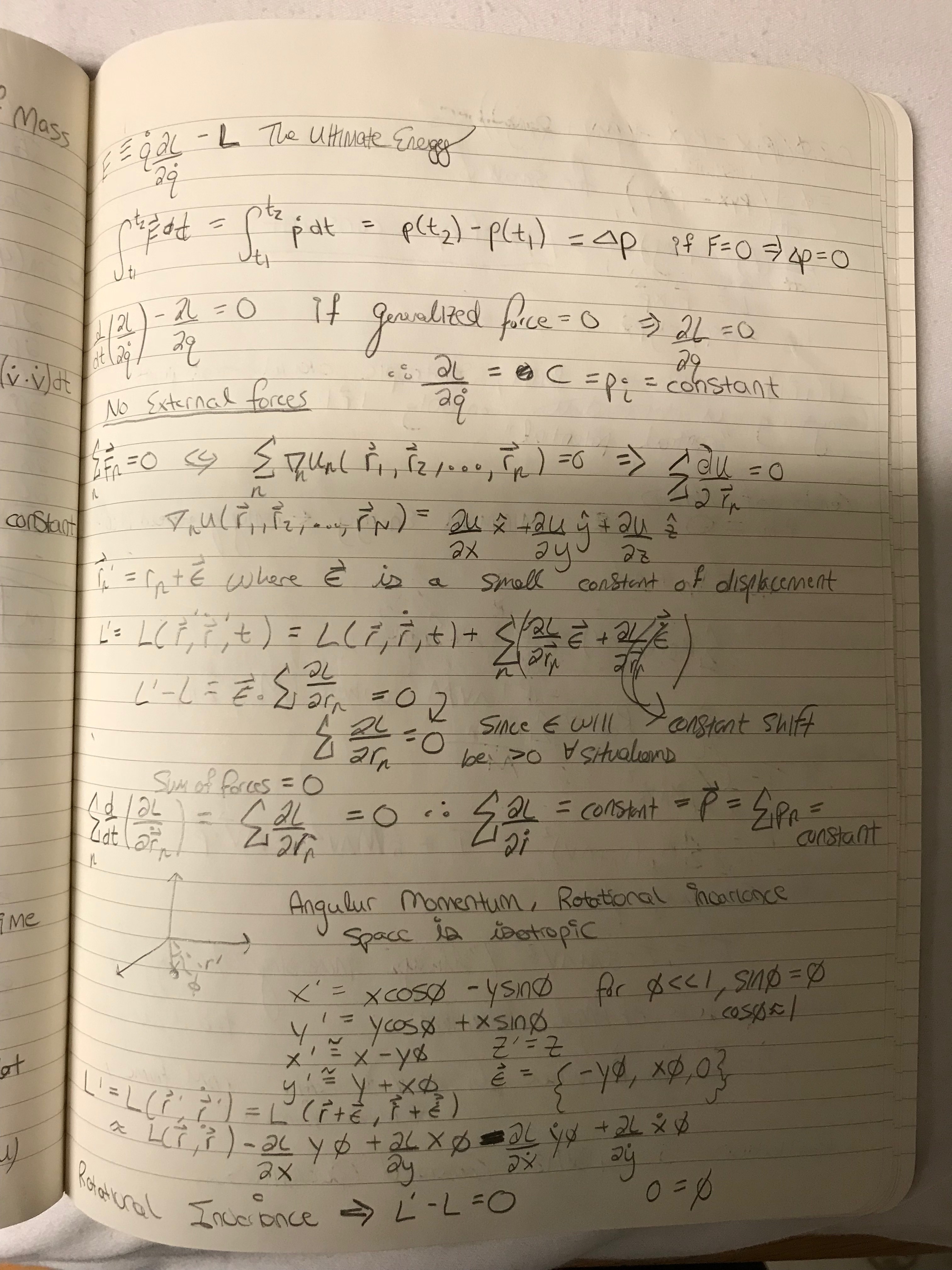 11:30 – Classical Mechanics II Lecture is now over, and I have a thirty-minute break before the recitation starts. I normally take those thirty minutes to either shove trail mix down my throat because I’m already starving, or I take a walk around campus. This week at least, the cold hasn’t been unbearable. I have time to make one small walk around campus before I return to the same class that makes for a nice mental break before more.

12: Recitation time. Recitation for 8.223 involves a lot of problem solving. We worked on a pendulum attached to a spring that can be seen in the picture below that was interesting! 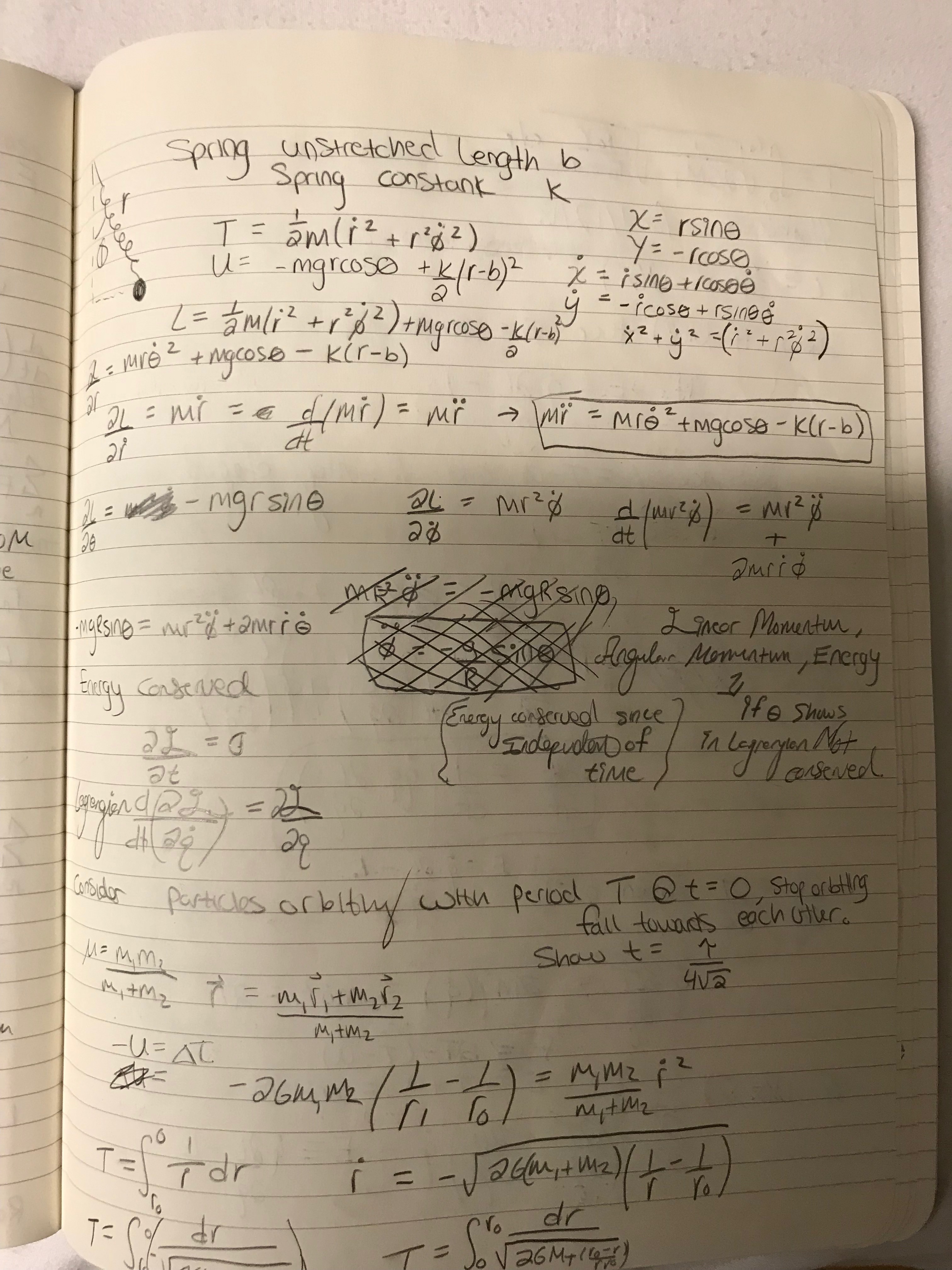 1 – The Math Lecture Series (18.095). With the only requirement for this 10 guest lecture series on all varying topics of mathematics being Calc I, essentially anyone who is interested can sign up. This week, the lecture on Monday was on some of the basics of differential geometry and developable surfaces and Wednesday was about the mathematics behind Deep Neural Networks that just goes to show the range of things being talked about. On Friday, the topic was on the brachistochrone curve, and the concepts of the Lagrangian and Least Action. It was like 8.223 round two! The brachistochrone, for those that don’t know, is the curve of fastest descent that can basically get from point A to point B in the shortest amount of time as possible. We had a very energetic lecturer who made it both easy and exciting to follow. It falls under the overarching topic called Calculus of Variations, and it defiantly helped out to see a more mathematically rigorous explanation for some of the mechanics that I am completing in my other class. After each lecture, we get assigned a mini problem set, here is the two questions I was working on over the weekend. Question 2 was death, but I think I figured it out after an hour or so. 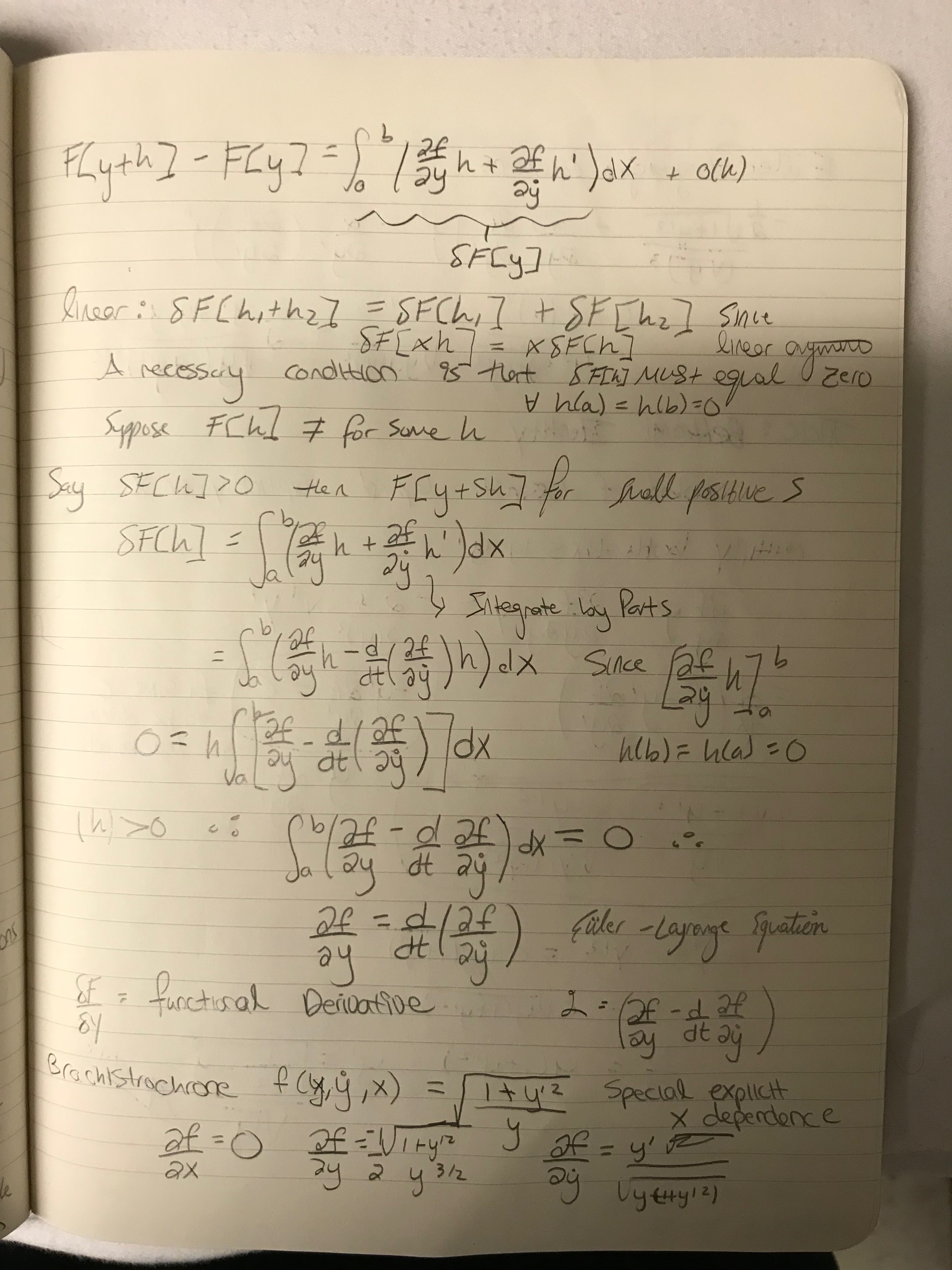 2:30 – Intermission. Technically speaking, I could be done with my day now, but I really wanted to take Special Relativity (8.20) as well. In this half hour, I normally sit around and wait for the 3:00 lecture to begin for special relativity, and then I head to that.

3:00 – Special Relativity. This class is so conceptually interesting at least for me. Last Friday, we went over time dilation and length contraction. Two concepts just so mentally challenging to visualize in my opinion. I watched the Einstein Show called Genius during winter break, and it is funny to think back on how they represented him figuring out all the equations that we are deriving in class. The class makes you think most of all. I like that about it. Normally, people associate physics with just straight math, and in high school that can be the case for the most part. However, this class, the math is simple. The math is definitely easier than what I am dealing with in classical mechanics II. But, the concepts and answering the “Why” and “How” of the topics being studied really push oneself to think in a different way. I am really glad that I go to the lectures, so I can gain this knowledge before taking Relativity next fall (8.033). 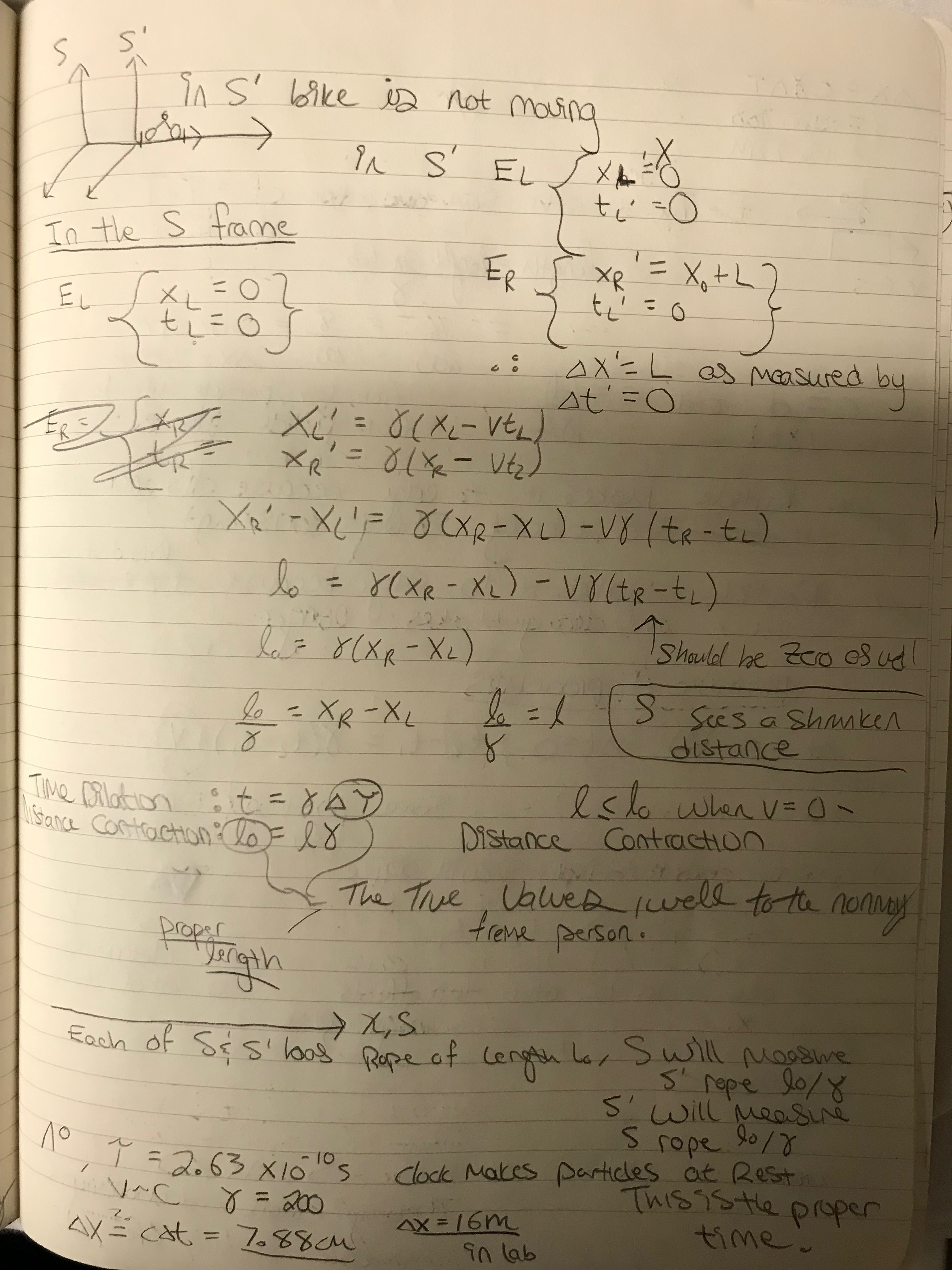 4:30 – Closing Time. Now, it is time for me to go home! Well, somedays at least. Right now, my research is running a lot of simulations that doesn’t require much intensive time in the lab. Soon, the simulations will be done, and I will be back every day after class, but it is pretty slow as of now. I head home and change, pick out a different soup, and head back to the country kitchen where I started my day that morning. The rest of the night is truly unpredictable and ranges from working on problems all night, binge watching Netflix, or biking somewhere around town. That all being said, I am definitely going to leave IAP with so much more knowledge and information than when I started.

Hi! I am Jack-William (yes, I have two first names but just call me Jack), and I am from Cape Coral, Florida. I am a first-generation college student that comes from a close knit family that all live on the same street that includes my mom, sister Faith, and two aunts; Pat and Joy. I enjoy playing s…
Keep Reading