which hurled itself repeatedly into the icy arms of death

Many a night and moon ago, I was climbing, and my phone slipped from my pocket. Both my hands were occupied holding the rest of me aloft, so I could only watch as my phone tumbled down, down, and crashed on the cement below.

I scrambled down to salvage it, only to find the screen severely cracked. I pressed power and a half-centimeter-wide line lit up; the rest stayed black.

I went to get the screen repaired. This took going to two shops, as my phone was⁠01 spoiler alert a Pixel 3a, top-of-the-line about four years ago, and middle-of-the-line when I bought it in 2020, but the powers that be had rendered it just about ancient in terms of repairs. The first shop I went to didn’t have a screen to replace mine. I hadn’t planned for this, so I walked outside and pulled out my phone to look up directions to the next repair shop.

I then put my phone away, the half-centimeter line of screen in the middle being insufficient to guide me, and set to eke out directions on my own. I was near Central, where I’d lived last summer, so I knew a nearby cafe that would have wifi. I walked there, checked online with a few other repair shops and found one that did have a 3a screen. I glanced at the walking directions, but I was so used to being able to double-check that I didn’t memorize the street names. Midway there, I realized I’d forgotten a turn, and dipped inside the nearest store to ask the owner for directions. It was a chic liquor store and the owner wasn’t inside, so I chatted with another customer while waiting for him to get back.

All this was somewhat funny, since my phone back in high school, a hand-me-down from my big sister, had about the roaming power of a Commodore-64. I would regularly memorize directions. When I was travelling the west coast, I drew a lot of maps on paper, cross-streets and exits labelled.

I hadn’t exercised that part of my brain outside of MIT’s campus for a while. I wondered again if I’d lost a certain wildness, if I had grown too settled in modern day luxuries. Or maybe memorizing directions isn’t a necessary skill any more.

I got my phone back the next day. The screen was perfect. No one had texted me anything of dire importance. The speakers sounded like someone was crunching tinfoil over them, but I mostly used headphones anyway.

“Why didn’t you just get another phone?” my friend asked. “It would probably cost about as much as repairs. Not the newest model, but the next-newest.”

“No,” I said, and said something about resisting the machine, and how I liked my finger-sensing button. My phone was smaller than newer models; it fit into my pocket, and I could type one-handed.

Then, about three weeks later, I was climbing something else. I learn from my mistakes: this time, I asked my friend to take my phone.

I didn’t think to do this until I was already eight feet off the ground, however, and between me leaning down and him reaching up, we fumbled the handoff. My phone tumbled down, down, and crashed on the stones below.

My phone must have been fragile from its last fall — one of many, since the time I dropped it at a bus stop in the middle of northern Italy one night — because the screen went black immediately, even though the cracks seemed minor.

I was in Connecticut, so I had a glorious time navigating bus directions from my MIT loaner laptop. On the bus, I wrote poetry and napped, stared out the window with no soundtrack.

Life sans phone was easier the second time around. Fortunately for me, all of MIT’s undergrad community is active on Messenger, so I didn’t miss out on social life while hunting for another repair shop that stocked 3a screens.

“By the way, sorry if I’m ignoring your texts,” I told my little sister on Instagram. “My phone is deceased.”

She wrote back, “Oh dw I hadn’t texted you.”

I got the phone fixed again, in Allston, next to a corner store with imported Mexican goods. At this point I wasn’t sure if it was worth the price, especially since it came back sluggish, but I was still committed to resisting the machine.

And then. I was asking a friend at EC for pset help. It was late, I was exhausted, but there was one problem left and the pset was due at midnight. I was sitting on the carpet, my notebook, laptop, and phone on the floor around me. Then somebody’s foot came down, down, and crunched onto my phone.

I did not feel anything at all, just laughed.

Maybe it’s a curse, I thought, in a sleepless haze. MIT let me climb somewhere cool, but ate my phone in exchange. The cost of adventures in Connecticut? A spiderweb of cracks. The cost of pset help? You got it.

Maybe I should get more sleep; then I might not fumble hand-offs, might think to take my phone off the floor. Maybe I should invest in pants with zippered pockets. Or make daily sacrifices to the frowning gods of this place, to satiate their thirst on something more replaceable.

I no longer remember why, but I was so hosed that week I didn’t have time to visit a repair shop for many days. I began carrying my loaner iPad around to check Messenger quickly and listen to music en route to classes.

All told, I spent about a week without a phone. I found that walking places disconnected actually felt nice. I had music, but my iPad was in my bag, so I wasn’t skipping songs or scrolling as I went. I didn’t miss the connection at all.

During lecture and pset sessions, I consistently found myself itching to pick up my phone, even though I had access to email and messenger on other devices. I didn’t break my Instagram addiction, but rather realized how deep it lies, because I began googling instagram.com on my iPad. Somehow doing this felt sillier when the screen was so large. Alas.

The main inconvenience of being phone-free showed up in practical ways — I go to Harvard for class four days a week, and my iPad didn’t have data, which meant that looking up bus routes or using BlueBikes off campus was a struggle. I went on runs in deep, bone-crushing silence, during which I told time by the angle of the sun.

Finally I hauled myself to a new repair shop. They didn’t have 3a screens, but said they would order some. “We’ll call you when it arrives. What number should we call?”

“Um,” I said, and held up my broken phone. Admittedly some people have families in the city, and others memorize their friends’ numbers. I, however, simply did some price calculations, then let the machine swallow me and ordered a new phone.

It’s kinda shiny. It doesn’t have a physical fingerprint-sensing button, and the digital one is crap, which is irritating. Mostly I hate how delicate it feels. I like having things that are breakable, cheap, and therefore easily replaced, so that having them lost or broken wouldn’t ruin me.⁠02 there are counter-arguments to this, of course, like the value of having something good that lasts. But I feel myself becoming modernized. The cheapest laptops don’t run CAD software all that fast, so as I search for a laptop to replace the loaner I’m using, I have a different set of requirements. I’ve set aside certain shirts for the forge, which means that the rest of my clothes aren’t worthy of being covered in coal dust and flakes of oxidized iron. These changes are logical, but I still feel that I’m letting greater complexity and fixed costs sneak into my life.

Farewell to my old phone. He served me well. He is sitting with a big crack in the bottom of my drawer, waiting for inadvertent hands to grope around for charging cords one night and close upon him. But that’ll be a story for another blog.

These kids and their phones. 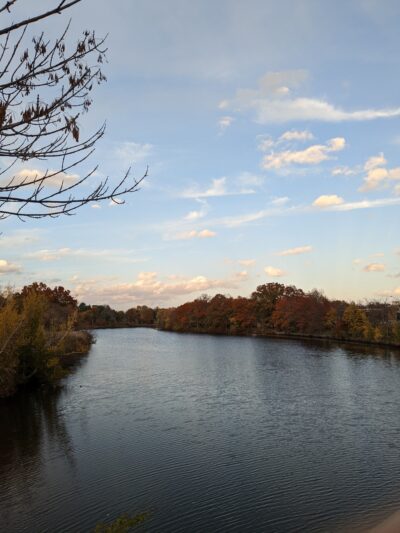 the Charles somewhere west of Harvard: the inaugural photo taken by my new shiny phone