I went to MIT EnergyHack!

A few weekends back, I went to EnergyHack, ran a half-marathon, and survived!

For EnergyHack, I was on a team with my friend Josephine R. ‘24, and her lab mate, Rick W. ‘25, an exchange student from the Netherlands.

EnergyHack began Friday night with a few speeches and an unveiling of the challenges. There were about 100 teams, and 10 different challenges set forth by various companies, all heretofore unknown. Then there would be catered dinner.

I’d had a midterm and a major essay on Thursday and Friday, so I hadn’t devoted much time to either hack prep or sleep. Still, enticed by the promise of free food, I roused myself and went to the opening event on Friday. Josephine is a chemical engineer, Rick knows computer science, and I am MechE. We were excited and nervous to hear the challenges and get to building. Would we have the chops to make something that worked in 36 hours? Were we expected to sleep during those 36 hours?

We listened to the keynotes — one by a startup making smart windows, another by a steel production company. Then came the challenges:

The first challenge was to design — or, given our time frame, research — a green alternative material for an established company that was presumably trying to make more climate-friendly choices.

The second challenge was to craft an advertising schema for a company which was in the process of re-branding its pre-existing process to sound more green.

The third was to research ways to reduce emissions for a particular company’s refining process.

All in all, each challenge was more suited to advertising or market research than building new products.

‘Hm,’ we said, and went to get EnergyHack free dinner.

Josephine and I are generally vultures and consume anything, but this particular food was not our cup of tea, or rather plate of greasy, lukewarm lasagna.

In hindsight, MIT Energy and Climate Club is a business-focused energy club, so we could have seen this coming. In the moment, though, we were floundering to find where our skillset would fit — we knew about thermal processes and machining, but weren’t deeply knowledgeable about most of these fields, and we had 1.5 business and negotiation classes between the three of us.

We went through the list of challenges and narrowed down to which ones seemed to require the most technical knowledge, and the fewest advertising skills. We chose one about finding new data center cooling tech. 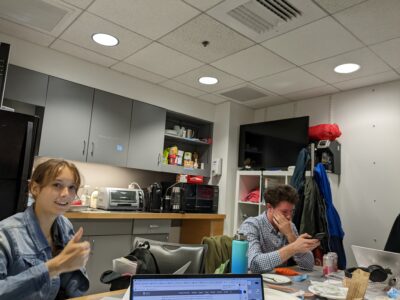 That night, we holed up in Josephine and Rick’s lab, munching on free granola bars⁠01 there is a theme here and researching cooling tech for data centers. We speedran through the history, from traditional air cooling to various new liquid cooling methods — mainly immersion cooling, which submerges the servers in dielectric fluid, and direct-to-chip cooling, which pipes liquid to plates on different parts of the server.

Washed with so much new information, it was difficult at first to find a way to go, but we were feeling hopeful. I crafted an email to send to our mentor, who had designed the challenge to begin with, laying out our intended direction and asking for any criticism. After finalizing the email, however, I realized we hadn’t actually been given our mentor’s contact info, so we turned the email back to bullet points to show him at our meeting the next day.

The next day, bright and early at 11am,⁠02 Josephine showed up at 9:30 but the rest of us, uh, did not we set to work. EnergyHack food redeemed itself by serving Mexican food for lunch — and dinner, since we squirreled away extra burritos for later. I was trying to carb-load for the half marathon, Sunday morning.

We revised our plan, which was focused on liquid cooling, which was new but had a healthy foothold in the industry. We did a bit more research, then met with our mentor.

Our mentor was from a VC company. We laid out our plan for determining which cooling systems to recommend — any questions?

“You guys are from MIT,” he said,⁠03 translated from professional lingo. “tell me about AI.”

Being from MIT, we have an understanding of how AI works, but none of us were focused on the development of AI, with or without regard to data centers.

Still, we said, “You bet,” and scurried back to our table, where we began researching AI.

As it turns out, AI has been recently applied to optimize air cooling systems. It’s a good fit, since data centers are full of sensors anyway. A few major companies, including Google, have used AI optimization to reduce energy use by 40%

This all looked promising, but there was only one startup we could find that was applying AI to smaller companies, as Google’s work seemed to be internal. We scraped together all the information we could find, recommending the single new startup, and AI as a whole.

“This feels like a self-fulfilling prophecy,” Rick said, later that night. “We think he wants us to recommend AI, so we’re recommending AI.”

We paused and took a breath. Did we actually believe in AI? Maybe — it seemed like the best way to make air cooling more efficient. We hadn’t found an AI model for liquid cooling, which is less common, but that didn’t mean the two weren’t compatible.

We did think that liquid cooling was better for new data centers, for the moment, since AI-enhanced air cooling systems were more or less equal to liquid cooling in terms of energy usage.

This decided, we set to making a presentation. 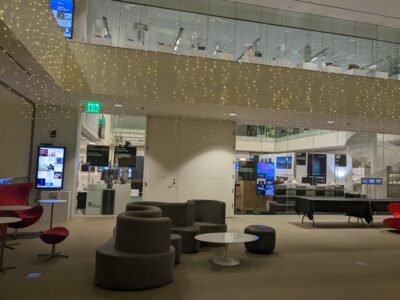 we holed up in the media lab for the night, which doesn’t have public access free food but does have secret granola bars if you know where to look

It was interesting to actually have opinions on this topic, which I’d literally begun researching the night before. I’d planned for Energy Hack to take up all of Saturday, so I devoted myself to the project without worrying about other work I could be doing.

I was exhausted. I’d been working on something since the previous Sunday, jumping from pset to midterm to final essay without any days of rest. Remember the Sabbath, I told myself; keep it holy. Reserve the weekend for bacchanalia.

I was thinking about how, at MIT, I rarely have the time to let new obsessions seize me. I’ll watch forging videos over quick meals, but don’t get to start every project that comes to mind. My notes for new stories are just that, notes. I have not been consumed by a book in too long.

I miss that. During summer, I spent a week going to krav maga every day, and I felt myself improve by the end. Now I’d feel much more confident writing fight choreography where both characters keep their footing. I also spent a weekend writing a story about a vampire. In the covid spring of ‘21, I read the Six of Crows series and could think of nothing else; how long since a book has so gripped me?

I am hoping this IAP will give me space to fall into my own hobbies and wonderings.

After this, anyway, I know a lot about cooling data centers. 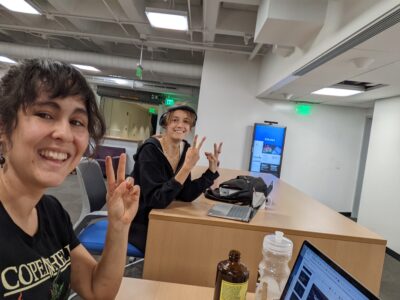 Saturday afternoon, Rick found an excellent tri-color template. We divvied up the slides, added pictures and captions. Rick edited our slides down to make them effective and to the point.

All told, the presentation looked great. 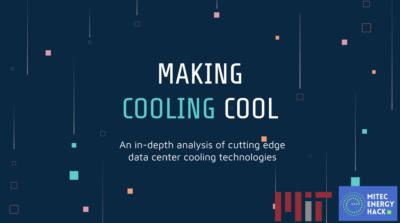 We finished around 9pm, and went off to scrounge up food. I went to a party for not terribly long, then went home and fell asleep by 11. It felt unnatural.

I then tossed and turned for a few hours before my alarm rang at an ungodly 6am. I stumbled out of bed, wolfed down some pad thai leftover from a different free food event, and got dressed: leggings, ratty Harvey Mudd⁠04 my college first fly-in! I never applied because I thought tech schools were a lot of work. Go figure. hoodie, and headphones. The sky was bleak and dreary. 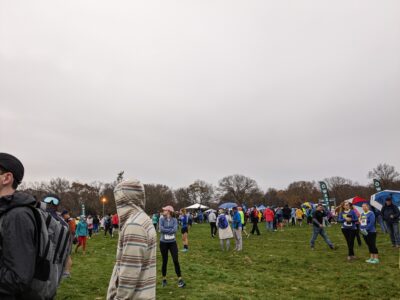 The half-marathon was an idea from this summer, when two of my friends suggested we do it. However, both friends wound up sustaining injuries, so I was the only runner left standing. I hadn’t trained.

I took an Uber to the race track through a grey Boston slowly awakening. The park where the course started was full of tents and volunteers in runners in bright colors. Everywhere, new shoes. People were sprinting on the track, or stretching. I scurried past, head down, while a drizzle began to come down.

The course went out-and-back through Boston streets, blocked off for three hours for this occasion.

We lined up at the starting line, although it was more of a mass of people, too big to see the front or back. A few rounds of professional runners started before the rest of us, and then, without even a gunshot,⁠05 idk if they do this everywhere but that was the starting sound for high school races in Arizona. we were off.

Everyone around me was running kinda fast, and I tried to keep up with them.

I am no longer competitive but suddenly I cared a lot about keeping up with the group. The only thing is, in a marathon this big and open to a general audience, the makeup of any group of runners is constantly shifting as some move ahead and others fall behind. I wound up choosing one person to stick near. Whenever I passed them or if they ran so far ahead I couldn’t keep track, I found a new person.

This was so helpful in keeping up my pace! I almost always run alone, and I’d forgotten how lovely it is to run in a crowd.

Boston has hills! Terrible. A crime. My instinct is still to pass people on the way up hills, which is kinda silly but so so tempting.

Half-marathons are also kind of like being tattooed on the calf, because every thirty minutes a new part of muscle you’d never given thought to before starts hurting like all hell.

There were markers every mile, often with water, gatorade, or gatorate chews. The course program clearly listed which miles would have water and chews, etc, but I read the program in about 5 minutes and didn’t retain much, so each marker had randomized gratification. This is good for training dogs. Maybe it’s also good for running faster? 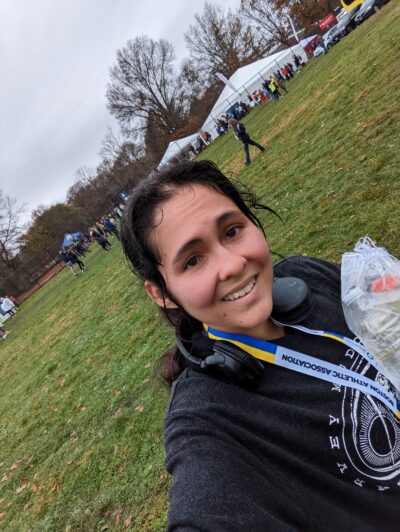 Race done, I wandered, spent and starry-eyed, through the rainy park. Some volunteers gave me a bag of snacks, which would have been free except I’d paid a race fee, so they were really the most expensive pretzels and hawaiian rolls I’ve ever had.

Then I went back to campus, thawed in the shower, and — the most difficult part of my weekend — hobbled on a sore hamstring to campus for the final EnergyHack presentation.

I was struggling to sound professional, but I was quite pleased with what we’d accomplished in the last 36 hours — in labs at MIT and on the race course.

Then we stole 6 sandwiches each from the EnergyHack luncheon — tuna, turkey and cheese, and avocado — and I slept.

Look out for EnergyHack applications next summer for the 2023 round! It’s a great way to delve deep into a topic and find ways to improve it.