Here’s a snapshot of a week:

My general plan is to wake up at 7:30, hit snooze a lot, and stumble into a cafe around 9:00. Write ’til noon, or 1; definitely not after 2. After that, I’ll head to lab, a 25-minute walk down Mass Ave. Usually the day is clear, or prettily cloudy. Lab goes until 6, and then I’ll head home, run, make dinner, and/or see people. 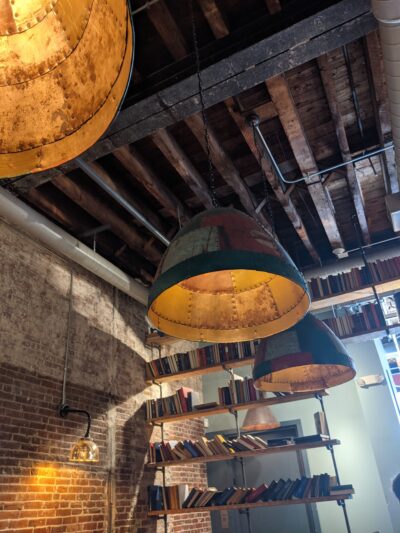 I love the cafe in the morning. Classical music plays, there’s always at least one free table, and most of the clientele work quietly. There are books along the walls, most of them higher than anyone can reach without a latter. Some are old and crumbly, but many are forty, fifty years old, grocery-store thrillers and outdated reference books.

I’m racing to finish a manuscript of a book as yet unnamed, about a poisoner and an architect’s apprentice. I’m a little nervous about what the editing process will look like during school — how will I make time? — but I love the process of writing a first draft. The world is as yet unwritten, the ending not set in stone.

I left with two characters midway through an escape, lost in the hidden tunnels of a palace.

my mentor Ellen and Professor Ono did this one, but I would like to think I provided moral support
are these beakers boiling in an instapot, you ask? Yes, they are.

Next I went to lab, where I went to war with the Arduino we’re trying to code (with the help of my professor, a small battle was won). Then I went running by the Charles, admiring all the trees. For the past two years, I’ve spent more time away from the desert than not, but I am still struck every now and then with how very green things are in Massachusetts.

Writing in the morning, again, and lab work in the afternoon. “Work” is a generous term, as my first task was to get ice cream with my advisor, her colleagues, and their interns. We went to New City Creamery. I got something chocolatey that melted in about thirty seconds, so while another intern asked questions about grad school, I wolfed down ice cream, struggling to get as much as I could before it dripped to the pavement.

Once the ice cream was gone, I learned about modeling weather patterns and methane sources in volcanoes, and I wondered, again, how grad school would suit me.

One of my advisor’s friends, a PhD candidate, is also an author. I asked her everything, down to which hours she wrote versus worked on her research, how she structured edits, how she searched for agents. It doesn’t sound easy to balance two jobs in which people are famously overworked and underpaid⁠01 though writing and research are hardly the only jobs like this (assuming writing pays at all), but she proves that it is possible. And she does have time to go out for ice cream.

Back in lab, I ran a lot of samples through a gas chromatograph.

Then I went to see Shuli! We got sushi and then walked around. The weather app had promised that it would not rain, but the weather app lied, so we wandered through a light drizzle. There was mist on the road, and clouds all around. I kept pointing out things that were odd, things which could be surreal: a school with white buses parked in front, not yellow; a narrow lane over a bridge that twisted out of sight. Shuli pointed to a tarot shop with a round sign in pink neon, then a bridge full of cars inching slowly forward. We ended up at the Alewife T stop, where the bus stop had an Oatly ad reading, “YOU CAME HERE FOR A REASON.”

In the morning, in my book, my characters stumbled into a fight. I kept editing each line, writing it two, three times, in order to make the assailant scary, to make the danger real. I needed the reader to feel that the hero was outmatched but not incompetent, so there was a slim chance he might win.

I’m excited to take fencing classes at MIT, and pistols, and all the other classes you need for a pirate license. I feel pretty good about my fight scenes, but I don’t actually know how to stab anyone, and I wonder what richness that knowledge would add.

In lab, I ran some more samples — we’re testing for methane concentration — and then I hung out with some friends and watched Palm Springs.

I came in to lab early, because we needed to use a more sensitive gas chromatograph, which was available only in the morning.

After lab, I crashed on the bed, read a book — Spinning Silver by Naomi Novik, highly recommended — and ran come nightfall.

Running after dark is new for me, since I didn’t feel safe doing so at home. I would like to say it’s freeing, but it’s kind of a natural evolution. I am older now, in a city, whereas the path I took at home was beautiful but isolated. I grew up associating that path with danger after dark; I have no associations here. So running at night is normal, albeit more inconvenient — there aren’t always streetlights, and the path by Harvard is crooked and bumpy, the asphalt broken by tree roots. It’s easy to fall.

I skipped writing on this day. I usually wind up skipping a day or two, which is why I never plan in breaks; I know they’ll happen anyway. I am trying to balance taking care of myself with holding myself accountable, tough love. Part of me thinks I should be waking up earlier, running in the morning, so that I don’t miss so many days. But part of me really likes sleep. Likewise, a small part of me thinks I should be actually cooking, instead of relying on canned beans like a college-kid stereotype; but most of me argues that canned beans taste good, given a microwave, spices, and Tapatío sauce. 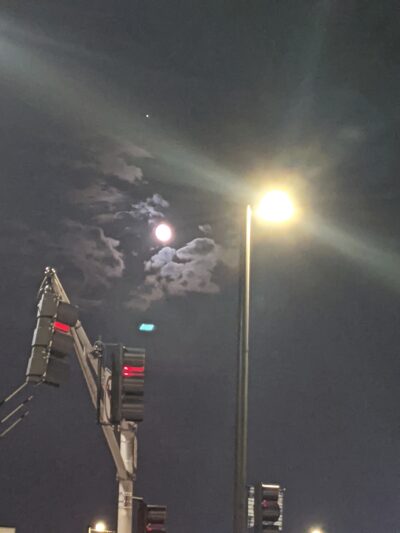 Do I recall anything of this day? In my book, the poisoner character came onstage again; I’d missed her. In lab, my advisor and I prepared for a field day next week.

I went running at night again, listening to How to Save a Planet, a podcast about environmental efforts. When they mention good organizations, I type the names into my phone, a list to look up later. Maybe one of them needs an engineer, a chemist, whatever I’m gunning to be. It’s comforting to think that there’s this whole tapestry of people fighting the good fight. There are a lot of things that need doing, a lot of shoes to fill. I don’t know which ones fit me, yet, but I’ll keep trying new ones on.

My housemates and I went to Tatte to celebrate two roommates’ birthdays! Tatte is closer to MIT than I realized (especially East Campus, where I’ll be living), and also tastier than I realized.

After that I wrote some words. I’ve gotta look up more poisons.

The birthday celebrations continued that evening, when we went to an Italian place which, blasphemously, did not have unlimited breadsticks. We as a household had near-unlimited stores of cake at home, however, which softened the blow. After dinner, we went home, poured rum over the icing of one of the cakes, and set it on fire. The flames licked up the alcohol, burning low, so that the cake itself was unsinged.

We sang Happy Birthday and divvied up cake. After a few bites, we realized that not all of the rum had burned off; it was a sort of Russian roulette whether your next forkful of frosting would taste like sugar or liquor.

We ate it sitting on the couch or on the floor, a haphazard circle. Once the cake was gone we just talked, about crushes and friendships and what MIT will look like come September, all the things we hope to do, the people we’ll meet and the people we will become.

a day of rest and recreation

The morning was slow and sleepy. I played Sawdust, this Killers album from 2006, and sang along, wildly off-key. I took the T to Porter Square, found a bookstore there and touched the books in all the usual sections I wander to: feminist lit and nonfiction and kidlit, and of course fantasy. I found this funky supernatural Sherlock Holmes retelling with a nice cover.

I wrote some words, and then began to head home, the new book under my arm. I’ve only been to Porter twice, but I found my way to a familiar street, then walked the rest of the way home without checking Google Maps. After nearly a year here, I’m starting to know Cambridge: the closing times of cafes, the bus routes and T stops, how to get places based only on landmarks.

And that is the whole entire week.

20 miles, just under 10k words, probably ~300 pages read, albeit of different books. I measure the weeks in numbers, pages read and pages written, but also in valuable, less quantifiable things—people, conversations, vibes. Concepts that could fit into a story, someday. Concepts that are certainly part of mine.