Why getting into MIT meant to so much to me

To a lot of people, myself included, getting into MIT is the dream we have worked for years to finally reach. This is just a little excerpt on me getting into MIT and why it meant so much to me. Enjoy!!!!

Finally. I sat on my bed silently. My fingers were numb and my breaths were shallow. I would look at the time on my phone, then on my laptop, then on my phone again. My head seemed eerily quiet, but not empty. It was as if my mind had exceeded capacity, and there wasn’t enough oxygen for each thought to speak. I checked my phone. 2 minutes left.

Not yet. I was starving. The last time I tasted anything besides water had been two days before. I was hoping fasting would bring me some sort of ease about what was to come, and it had, until now. I thought that through my fasting I had transcended fear and accepted that what was to come was unavoidable; however, it was all for naught the moment my efforts would matter most. I had long stopped feeling hunger, but the void in my stomach seemed to swallow any sort of intelligent thought that had survived the oxygen deprived wasteland in my head. I checked my laptop again. 2 minutes.

I looked up only to meet 6 sets of eyes. Each set seemed to reflect upon their waxy exterior a different emotion: boredom, support, nervousness, belief, fear, and that emotion, that feeling that you just want to go back to whatever it was you were originally doing, but can’t because you are obligated by social norms to stay right where you are. I looked desperately into the darkness of the jet black irises hoping that I might be able to find some sort of understanding. Someone that could hear the oxygen deprived screams of my mind, but they couldn’t. Honestly, if these eyes would do nothing, but sit above me acting blind to the tears that wish I could cry, then I would much rather them leave me alone and allow me to suffer without their judgement. However, I was obligated by those pesky social norms to act as if I appreciated their presence. So instead, I responded by moving the corner of my mouth slightly towards my nose. That should be enough to keep the eyes from thinking I had died. Back to my phone. 1 minute to go.

The air around me was completely still. Instead of comforting me with a gentle breeze, it simply sat with hands on my neck looking over my shoulder at the computer screen. The sun was having a joyous time dancing along my back in its high heels, stabbing my skin with its piercing heat. Below me my bed had decided to become a rock. I honestly have no idea how, I am not a bed scientist. My bed had been with me for 15 years, and honestly, I had decided to stop arguing about when it should be a rock and when it should be a bed. I just sort of let it be it. Laptop check. 1 minute.

Something instantly changed within my head. My thoughts had evolved to become purely anaerobic, and with their newfound trait they began to flood my mind. They rushed into every unoccupied space of my body demanding that every surface within me know what it felt to lack the oxygen that was so often taken for granted. There were two types of thoughts, those that were for me and those that were against me. The call I had gotten two days earlier, teasing me with the idea that I might have some sort of chance, for me. The results of my last exam, I had done well, but that meant nothing when all they would take was great, against me. My summer adventures, the time I felt for once I was beginning to make some sort of impact of this world of mine, for me. Me being just me, me just being yet another ordinary kid living an ordinary life hoping that something extraordinary might maybe possibly happen to me, against me. These thoughts would flow in time with the ever increasing beat of my heart: positive, negative, positive. The thoughts did not cease, but due to their neutralizing nature I felt no better or worse about my current situation, I just felt overwhelmed. I had hoped that my stomach would continue sucking in the thoughts that would leave my mind, but it had decided it was no longer hungry. As with my bed, I just sort of let it be it. Phone check. No change. 1 minute left.

I looked around the room hoping to find something to occupy my parading thoughts. A binder. My binder. It sat on the floor, calling out for me. It had a hard white outside scattered with particles of brown dirt, and a front flap that was now more bent than straight due to being stuffed far beyond its intended capacity. Inside there were two notebooks, a black five subject spiral, and a green single subject with the words “Questions of Life” written on the front. Both were slightly tattered, containing wrinkled pages from water damage and small stains from various foods. Neither of the two books were full, but the amount of writing per page was twice that of a normal sheet of paper. Along there pages were scribbles of chemical compounds, biological makeups, drug delivery ideas, and of course “Questions of life”. After flipping through the notebooks, one would be met with a fleet of papers, each new paper being marked with a worn yellow post-it note at the top of the first page. The first paper sat within a mangled page protector that had not done its job very well. The paper was black along its edges from strange particles that had easily slid through its not so protecting covering. The paper itself looked much like the pages of the notebooks, full to the brim with scribbles of hopeful ideas that would pop into my mind, or explanations to words I didn’t understand. Along the lines of the paper ran streaks of orange highlighter that would identify text I deemed particularly important; therefore, the whole paper was almost entirely orange. The pages that followed mimicked the first. Though not in page protectors, the poorly printed papers that followed all had the same orange highlighter sliding across the text. Each page was individualistic, slightly different from the page that sat next to it. Some had holes punched on the wrong side, or an extensive amount of my own writing, or none of my writing at all, or an author whose name was circled, or an images that were printed in color. After flipping through an eternity of pages, one would then reach a paper with an orange post-it note. My paper, my proudest accomplishment, my one contribution to the world I wished to be a part of. Unlike the others, this paper did not contain orange highlighter, nor my handwriting. It was not wrinkled or stained. It sat crisply in the back of an army of papers simply staring at me, my name sat proudly in bold at the front of a line of far more qualified names. At the end of my last name sat a little 1, a number I felt I didn’t deserve, but would wear with the upmost humility. This paper was special. This paper was the one thing I felt showed that I was truly fulfilling a promise I had once made to someone I loved. Laptop check. 1 minute.

The binder was born November 21, 2007. The same day breast cancer took my mother’s life. The same day, hours before her death, that I promised her I would find a cure to cancer. My binder was that promise. A promise I had made almost a lifetime ago to someone that I loved more than life itself. A promise that was made to someone that was no longer around to see this binder be filled, or to see what was to come in the minute, or to tell me I should calm down, breath, and believe that was to happen was meant to happen. A promise I would fulfill no matter the circumstances that faced me. A promise that I felt could only be realized if in the next moment I could achieve the impossible. Phone check. 0 minutes left.

My heart decided to mimic my bed and turn into a rock. I couldn’t breathe, my fingers froze as the time seemed to stare me down as if to say, “Yeah, I’ve been coming for you.” However, I was ready. I was terrified, I was hungry, but I was ready. I typed in my name slowly. My brain no longer possessed the ability to use all ten fingers to type, so it had resorted to the “single finger poke method.”

The screen refreshed, nothing had changed. I looked at the time again, time zero was still smirking at me. Had I made a mistake? My hands were shaking so fast that even the single finger poke method was slowly failing me.

Again the screen did not change. My heart had decided to stop mimicking my bed and to start mimicking my hands instead; my stomach just wanted to throw up all of the thoughts it had taken in. Laptop. -1 minutes.

What the heck was wrong? I couldn’t think, nothing was going through my mind. Absolutely nothing, it was just white. One more time. I had to stop breathing and blinking to muster up enough brain power to type in the code on more time.

The screen refreshed. This time with a letter. Again my heart reverted back to my bed. I had almost forgotten how to read at this point, but I knew I had no choice, so I compromised by reading every other word. “Benjamin-behalf-the-Committee-is-pleasure-offer…….”

Mom, it looks like I might just be able to keep that promise I made to you.

In the back is the binder that I describe, and the open is binder is new one that I am starting now that I am here at MIT, and in all honest, the other one is getting kind of full. 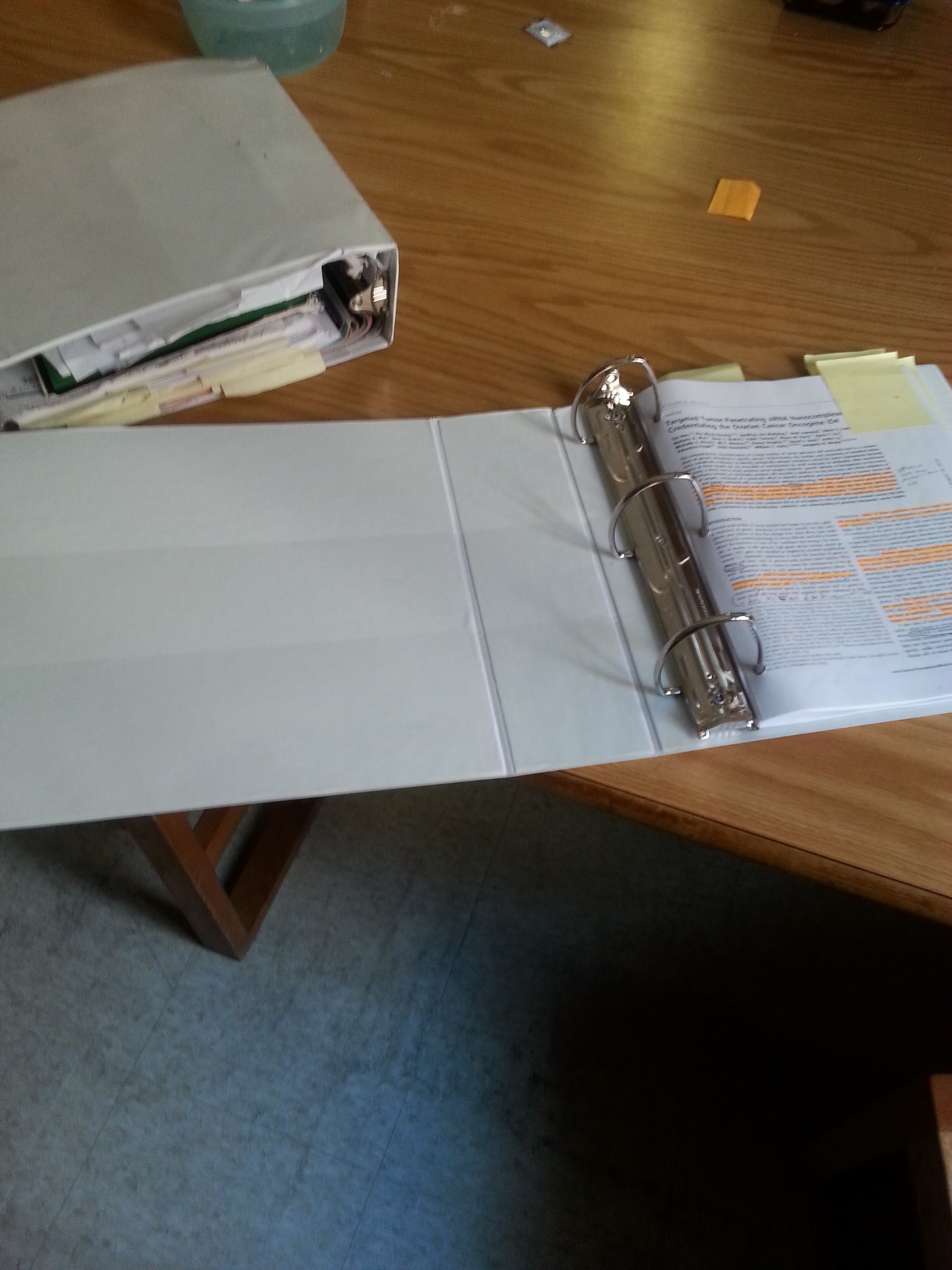